He got in hot water two months ago when he was caught on camera kissing Lily James in Rome.

Now Dominic West could be in more trouble as a photograph shows him flouting Covid restrictions.

The actor, 51, enjoyed a meal near his Wiltshire home at the weekend, apparently after a shooting party.

Shoots ARE allowed in Tier 2 … but what about outdoor lunches?

In Tiers 1-3, shoots are exempt from the rule of six limit on gatherings.

The organiser or participant of a shoot must instead ensure that all reasonable measures have been taken to limit the spread of coronavirus.

A smiling West, in flat cap and Barbour-style jacket, and Allott are among seven around the table, with a place-setting for an eighth diner and cutlery for three courses.

The rule of six applies to outdoor meetings in Tier Two areas such as Wiltshire.

Celebrities including Gary Kemp and Tamzin Outhwaite posted comments on the photograph before it was deleted yesterday – shortly after the Daily Mail contacted West and Allott.

Friends of the group last night cited British Association for Shooting and Conservation guidance that states ‘group shooting activities are not subject to gathering limits’ including the rule of six.

However, the guidance says shoots must conform to the relevant tier limits and ‘the exemption of outdoor physical activity does not apply to associated social activity’.

West and Allott did not respond to requests to comment last night. West’s wife Catherine FitzGerald, 49, cannot be seen in the photograph. 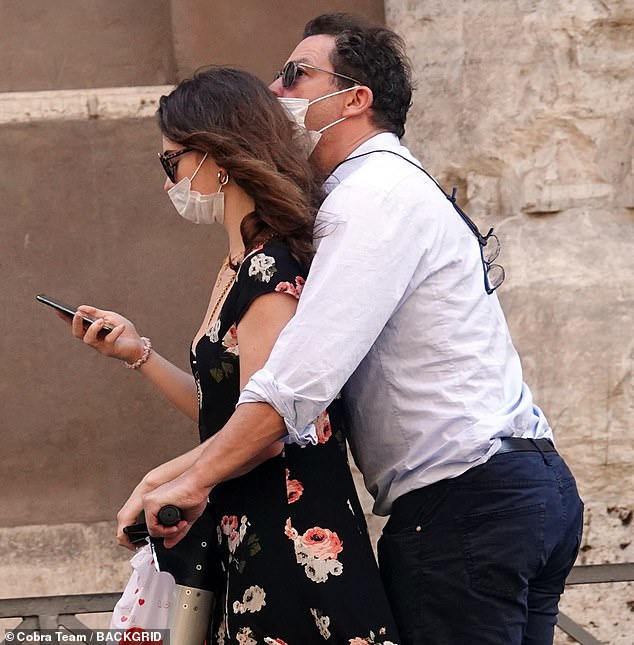 The actor was seen apparently kissing Miss James, 31  on a trip to Rome in which they shared a scooter (pictured)

The couple’s ten-year marriage has been hanging in the balance since October, when the actor was seen apparently kissing Miss James, 31 – his co-star in an upcoming BBC adaptation of Nancy Mitford’s novel The Pursuit Of Love – on a trip to Rome in which they shared a scooter.

Irish aristocrat Miss FitzGerald initially put on a show of unity with her Eton-educated husband.

They kissed for the cameras outside their Chippenham home and wrote a note that read: ‘Our marriage is strong and we’re very much still together.’

However, it was later reported the marriage is ‘as good as over’.