Dominic West and his wife struck a ‘denial pose’ in echoes of ‘unfaithful politicians trying to save their careers’ as they posed outside their house today, a body language expert has claimed.

The actor, 50, who wasn’t wearing his wedding ring, and his wife Catherine FitzGerald kissed and put on a united front outside their Wiltshire home on Tuesday after his passionate clinch with Lily James, 31, in Rome, in a pose reminiscent of various MPs – including the likes of Piers Merchant and David Mellor.

Speaking to FEMAIL, body language guru Judi James said she was surprised the couple went for the ‘old-school and rather gruesome body language ritual known as “The Denial” pose’ to prove their marriage is still ‘strong’ and that they’re ‘very much still together.’

‘Whether prompted by guilt or actual innocence, the denial ritual is notoriously and historically one of the trickiest non-verbal performances to pull off,’ she explained.

‘A favourite of face-and-career-saving politicians, who would often involve their entire family in the Walton’s-style shots, the public have become cynical as a result of so many of them emerging just prior to a split.’

Dominic West and wife Catherine FitzGerald (pictured) used the ‘denial pose’ – a favourite of face-and-career-saving politicians – as they put on a united front outside their Wiltshire home today, according to body language guru Judi James 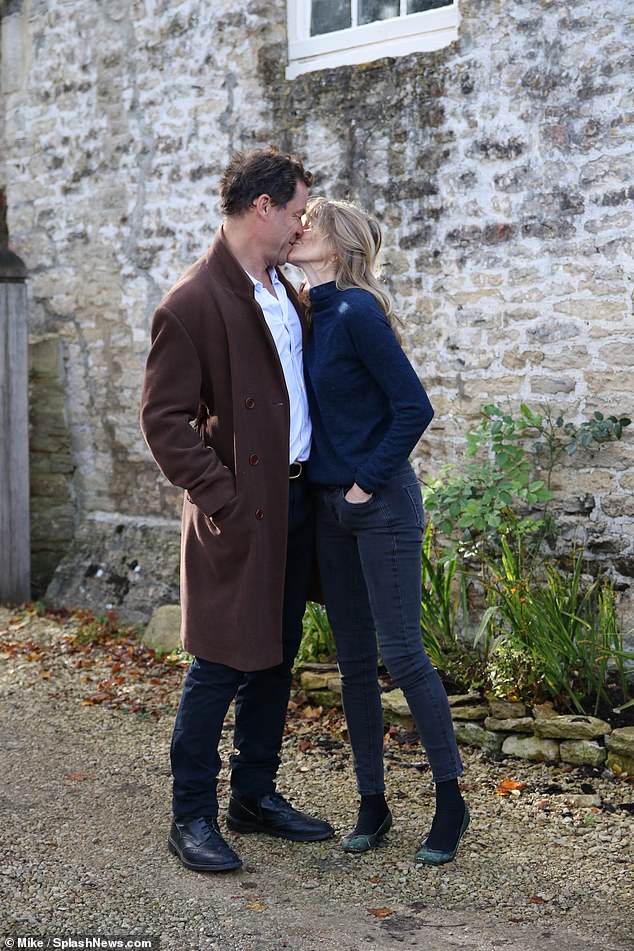 Judi added that we evaluate a strong relationship by ‘subtle gestures, not the big, unnatural and contrived-looking performance moments’ – such as Dominic and Catherine’s kissing (pictured)

The photos come one day after the actor and the Mamma Mia! star Lily, caused quite the stir with their passionate – and very public – display and didn’t seem to mind who saw them as they cuddled up while taking in the sights of the Italian city.

Taking a look at the photos captured today, Judi observed that the couple’s body language suggests Catherine is leading the ritual, while Dominic’s gestures suggest a more ‘reluctant’ and even cynical approach.

‘For Dominic and his wife the body language does suggests it is the wife leading the ritual, emerging from the house first before clamping her torso to her husband’s and stretching up to either kiss him or to gaze at him adoringly,’ she explained.

‘Dominic’s body language does suggest a more reluctant and even cynical approach to the whole event as he keeps his torso turned to the cameras and one hand in his pocket during the PDA, even appearing to laugh mid-kiss.’

‘His back is arched and his one raised brow as he looks at the cameras rather than meeting his wife’s gaze suggests he’s aware of how difficult these poses can be to pull off, no matter how innocent or how great an actor.’

In one photo, Catherine kept her ring finger in her jeans pocket as she leaned in to kiss her husband. 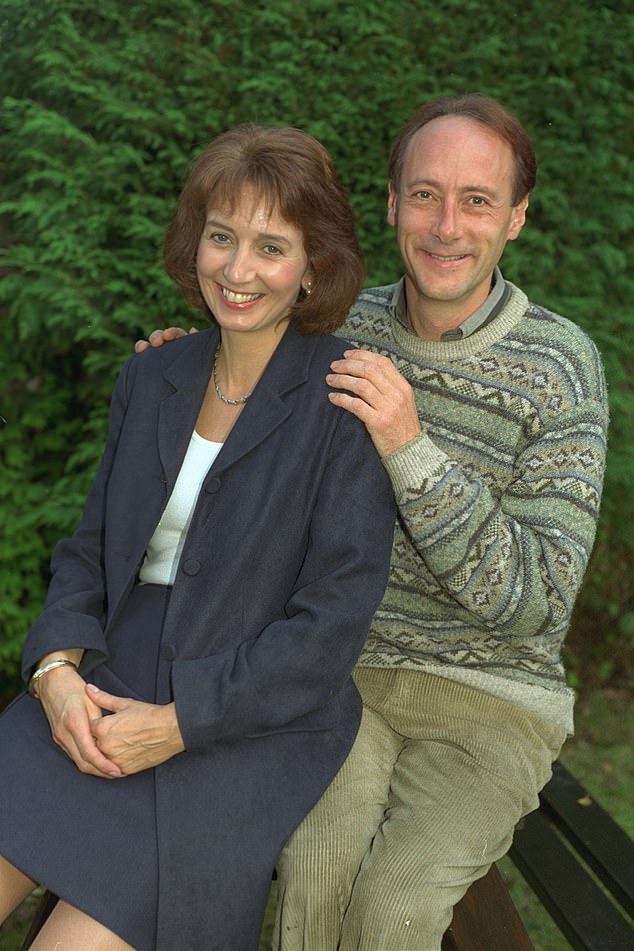 Tory MP Piers Merchant, who died in September, 2009, was caught with 17-year-old Soho nightclub ‘hostess’ Anna Cox at the height of the Tory sleaze furore before the 1997 General Election. His wife Helen Merchant backed her husband and appeared on the doorstep of the family home and kissed him passionately 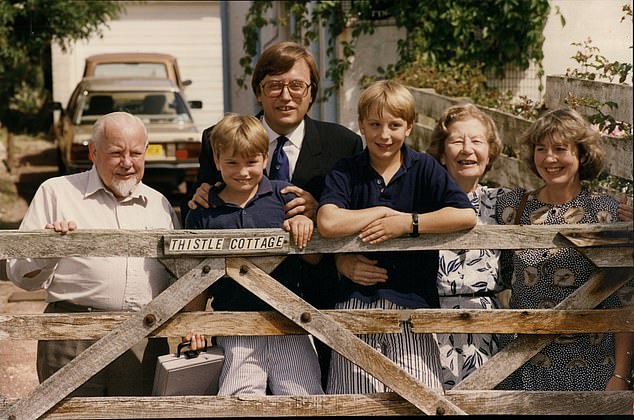 ‘This is an occasion when words really can do a job better than body language and just a brief but firm PR statement is always going to do the job of closure better than any rigidly-beaming PDAs and toe-curling kisses will ever do,’ said Judi.

‘We evaluate a strong relationship by subtle gestures, not the big, unnatural and contrived-looking performance moments.’

Judi went on to explain that it’s subtle touches, tie-signs and grins or glances exchanged that tend to reveal clues about depth of feeling between a couple.

‘Oddly grinning kisses in front of the cameras like the one Dominic and his wife have created will rarely prompt anything more than empathetic embarrassment in the viewer,’ she continued.

Disgraced former Tory MP Piers Merchant, who died in September, 2009, was caught with 17-year-old Soho nightclub ‘hostess’ Anna Cox at the height of the Tory sleaze furore before the 1997 General Election. 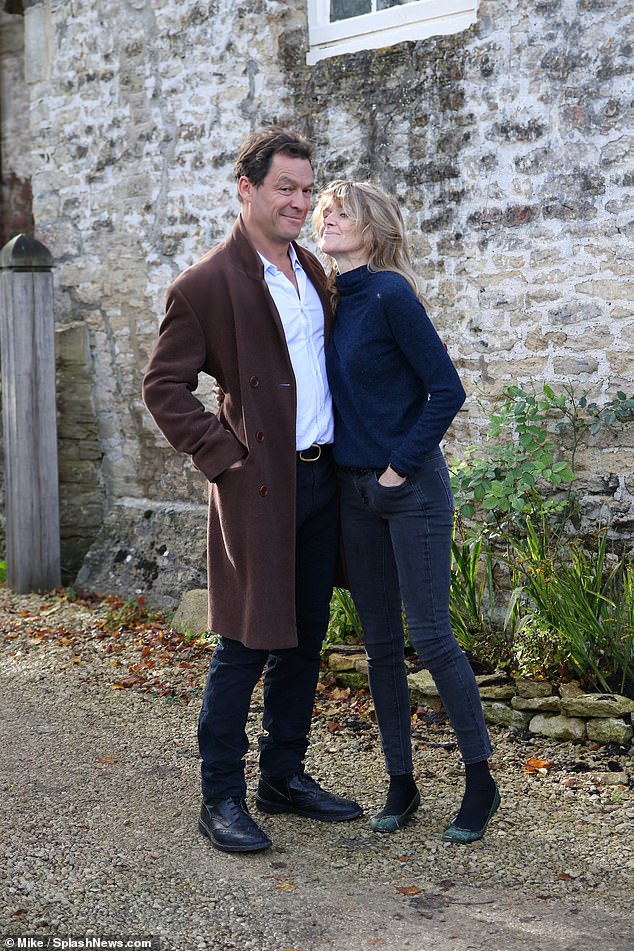 In one photo, Catherine kept her ring finger in her jeans pocket as she leaned in to kiss her husband (pictured)

His wife Helen Merchant backed her husband by declaring that he had been a ‘bloody fool’ but that she still loved him – and similarly appeared on the doorstep of the family home and kissed him passionately.

‘Piers Merchant’s wife even wore a businesslike suit for her ‘Denial’ pose with her husband, while Piers obviously missed the “formal wear” memo and opted for a Sunday supplement-style jumper,’ explained Judi.

‘Placing his hands on his wife’s shoulders in a half-hearted clamping gesture, his wary smile did very little to reassure us all was well.’

Meanwhile, in 1992, David Mellor was splashed across the front pages after it was revealed that he had conducted a three-month extra-marital affair with Antonia de Sancha, a jobbing actress who, at 31, was 12 years his junior.

Their liaisons had taken place at a rented flat in London’s Earl’s Court, where Mellor stayed overnight, sleeping on a crumpled mattress surrounded by half-empty champagne and brandy bottles.

Five days later at Thistle Cottage, his parents-in-law’s Sussex home, the gap-toothed ‘Minister for Fun’ had co-opted them, along with his wife, Judith, and two small children, into a display of family unity via a photoshoot.

‘David Mellor enlisted the entire family for his shot although he was the one still wearing a suit and looking as though he had just popped in at the last minute,’ she added.