Are you looking forward to the Olympic Games? Well, about 80 per cent of the Japanese people say they aren’t — and they are the ones who are hosting it.

The Olympiad was meant to be held last summer, but was postponed to this July, because of the Covid-19 pandemic.

The International Olympic Committee (IOC) boasted that the rescheduled Games would signal ‘humanity’s victory over the Coronavirus’. Yet Tokyo has now declared a state of emergency as it has been hit by a fourth wave of the virus.

Are you looking forward to the Olympic Games? Well, about 80 per cent of the Japanese people say they aren’t — and they are the ones who are hosting it. Pictured: Japanese Prime Minister Yoshihide Suga

Kentaro Iwata, a doctor in Kobe where 1,700 people with the disease need hospitalisation but can’t find a bed, told the Washington Post: ‘We are really fighting a life and death situation. How the Hell can you speak of a sports event gathering so many spectators, staff, volunteers, nurses and doctors? Who could enjoy the Games in this situation?’

The answer to his question is: the IOC. That is the organisation which derives its income from a feeder-tube attached to the event’s sponsorship and TV revenues — which are enormous.

And it is characteristic of the terms which the IOC seems always to extract from national politicians desperate to play host — terms which have more in common with those demanded of countries defeated in war — that it and it alone can authorise a (further) postponement.

Or as Japan’s Prime Minister Yoshihide Suga said earlier this month, when asked why it was going ahead during a national emergency: ‘The IOC has the authority to decide, and the IOC has decided to hold the Tokyo Olympics.’ 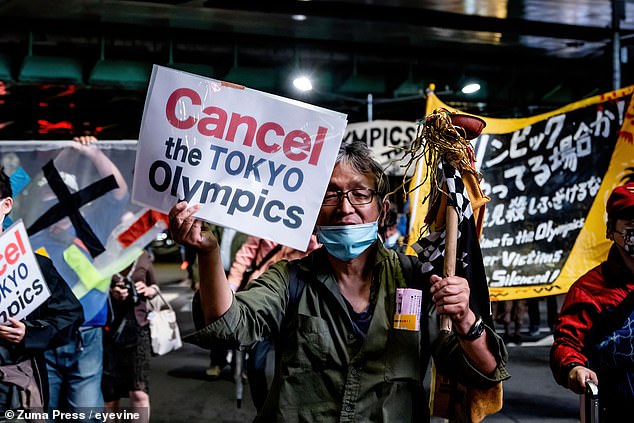 Health workers have demonstrated in the streets (pictured) demanding to know why IOC officials will be getting regular testing for Covid 19, while even many Japanese doctors and nurses still can’t get access to them

Of course, the IOC has demanded all kinds of special medical facilities be made available for the thousands of its own delegates attending, and has negotiated an exclusive vaccine deal with Pfizer. Meanwhile, only 4 per cent of the Japanese population have received at least one dose of a Covid-19 vaccine.

Given that the organisers have suggested that as many as 10,000 health workers would be required for the Games, no wonder the public there are affronted: they have demonstrated in the streets (a much more unusual event than it would be in this country) demanding to know why IOC officials will be getting regular testing for Covid 19, while even many Japanese doctors and nurses still can’t get access to them.

This astonishing arrogance and political tin-headedness of the IOC surprises me not at all. Nor does the way in which a supposedly sovereign government panders to its conceit.

I write as one who was consistently critical of the way our own politicians negotiated when we prepared to stage the London Olympics of 2012. Its most visible sign was the motorway lanes reserved for the IOC’s thousands of delegates, like the ‘Zil’ lanes for Communist officials in the Soviet Union.

The original promised maximum budget more than quadrupled from £2.4 billion to £10 bn (equivalent to £35 million per event). Then our Government boasted it had come in below budget. 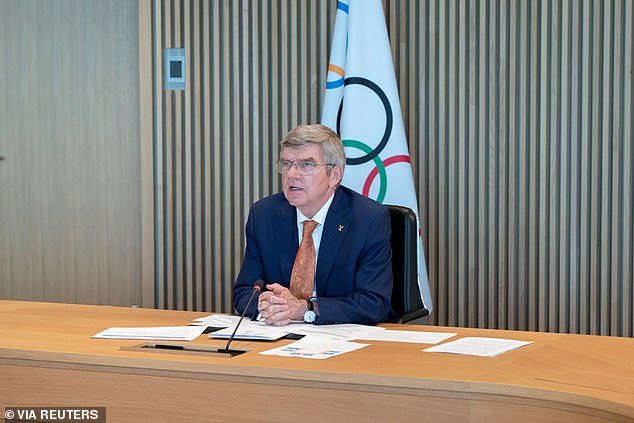 As a recent Oxford University paper on Olympic bid finances observed: ‘When it turned out that the final costs were slightly below the revised budget, the organisers falsely, but very publicly, claimed that the London Games had come in under budget, and media uncritically reported this, including the BBC.

‘Such deliberate misinformation of the public about cost and cost overrun treads a fine line between spin and outright lying.’

The most garlanded promoter of the London Games, Lord (Sebastian) Coe — whose ambition is to become President of the IOC — also made grandiose claims about the health benefits which a supposedly resulting athletics craze would accrue to the nation’s children, if the Games were held here, saying it would ‘help to tackle serious lifestyle conditions such as childhood obesity, heart disease and diabetes’. They have done no such thing.

As I wrote at the time, imagine the real health benefits to our children if the politicians (Coe had been a Tory MP) had instead diverted a fraction of that £10 bn to finance the school sports playing fields which successive governments allowed to be closed or sold off to property developers.

Unlike the London Games, that would not have involved the promotion of McDonald’s hamburgers and Coca-Cola (the two biggest advertising sponsors of our supposedly health-inspiring 2012 Olympics). 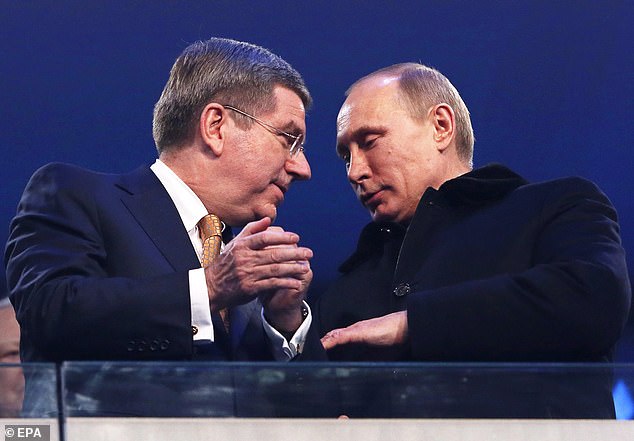 The answer to his question is: the IOC. That is the organisation which derives its income from a feeder-tube attached to the event’s sponsorship and TV revenues — which are enormous. Pictured: Russian President Vladimir Putin, right, and International Olympic Committee President Thomas Bach, left

Coe also claimed that if the games were held in London (rather than France, which had been our main rival), British athletes who otherwise might have come fourth or fifth in their events would ‘pick up bronze medals’ thanks to the inspiration of running before a home crowd.

Yet Coe’s own greatest achievements — world records as a peerless middle distance runner — were no less inspirational in attracting British children into athletics, although they were all done overseas.

As it turned out, a number of British competitors in the 2012 games — tremendously popular public spectacle though it was — were robbed of medals by Russians who were part of a state-controlled performance-enhancing illicit drugs programme. When the British press blazed a trail in revealing this scandal, Coe was furious … with the newspapers.

The IOC high-ups in general were scandalously slow in addressing this matter, perhaps not helped by the fact that the current head of the IOC, a German lawyer called Thomas Bach, and the Russian President, Vladimir Putin, enjoy what has been described as ‘a close and mutually beneficial relationship at the heart of sports politics’. 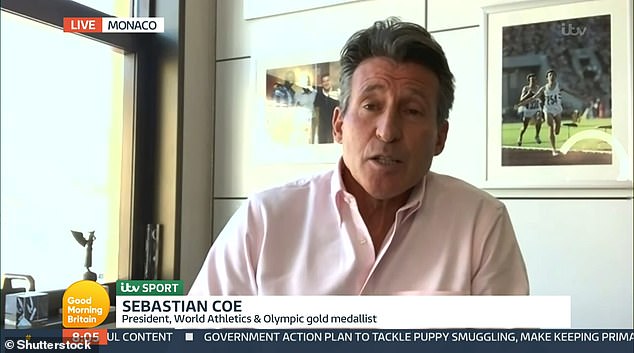 The most garlanded promoter of the London Games, Lord (Sebastian) Coe (pictured) also made grandiose claims about the health benefits which a supposedly resulting athletics craze would accrue to the nation’s children, if the Games were held here

Bach remains adamant the Tokyo games must go ahead, regardless of the concerns of the Japanese people (whose natural sense of hospitability is being cruelly exploited).

There may well be no spectators in the stadia, given the state of emergency. It will be a sham, in that sense. But the advertising revenues, based on the global television audience, will still pile up in the IOC’s coffers. And if more bodies pile up in Tokyo’s hospitals, too bad.

Lord Dyson’s inquiry into the circumstances of Martin Bashir’s interview with Diana, Princess of Wales addresses many of the questions that required answering. But some remain.

Yet it was inevitable that Hall — then head of the BBC department for which Bashir worked — would come to the conclusion he did: to exonerate and whitewash, even after he knew that the Panorama reporter had repeatedly lied when denying he had showed Diana’s brother Charles forged documents as part of his campaign to secure the interview. The point is that if this had been acknowledged publicly, there would have been cataclysmic consequences for Hall and his own boss, the BBC director-general John Birt. 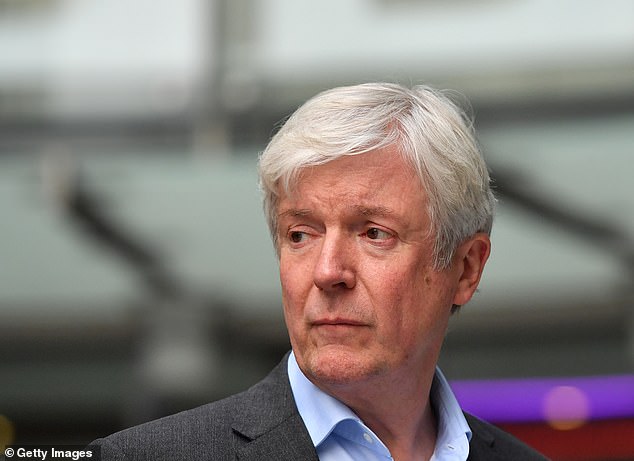 Put simply, they would have lost their own jobs. Birt already had run into huge difficulties with the then chairman of the BBC board of governors, Marmaduke Hussey, furious that he had been kept in the dark about the interview (allegedly at Diana’s request).

As a BBC governor from the time and the former head of the National Theatre, Sir Richard Eyre, recalled yesterday, Birt and Hall treated their governing body — the guarantor of the corporation’s standards and integrity — as ‘a bunch of wallies . . . there was total contempt for us from the management’.

So, when they reported to the governing board later, neither Hall nor Birt told them what they knew Bashir had actually done.

Had the governors known, it could well have been curtains for those two distinguished journalists (yes, they were both very talented, with many tremendous programmes to their own names). And they would not subsequently have been ennobled, as Lord Hall of Birkenhead and Lord Birt of Liverpool.

The fact that the Royal Family excluded them, and indeed any BBC representative, from Diana’s funeral, tells you what Buckingham Palace thought about this business.

And it remains a mystery why Hall, when in time he became director-general himself, oversaw Bashir’s return to the BBC as religious affairs correspondent, and then promoted him to ‘religion editor’.

Or perhaps this was because the BBC had itself become the Church of Latter Day Self-Preservation.