Well, if the meeting of leaders of the G7 group of Western nations in sunny Cornwall was meant to create an image of unity and harmony, it has not been an unmitigated success.

Or not, at least, between the British host, Boris Johnson, and the French President, Emmanuel Macron.

The two men had a sulphurous exchange on Saturday, its impact now rippling out in waves, like the effect of a large boulder hurled into the peaceful waters of Carbis Bay.

The Prime Minister had complained to Macron that, because of the relentless way in which the EU had been checking food products passing between Great Britain and Northern Ireland (now responsible for 20 per cent of goods border checks at the periphery of the entire European single market), we faced the prospect, when the Northern Ireland Protocol part of the Brexit agreement comes into full force next month, of an EU ban on chilled meats crossing from Britain into Northern Ireland.

Prime Minister Boris Johnson and the French President, Emmanuel Macron, had a sulphurous exchange on Saturday, its impact now rippling out in waves, like the effect of a large boulder hurled into the peaceful waters of Carbis Bay

‘How would you like it if the French courts stopped you moving Toulouse sausages to Paris?’ Johnson asked his French guest.

To which Macron allegedly responded that this was a duff analogy because Paris and Toulouse are ‘part of the same country’.

Later that day, a furious Boris Johnson told a television interviewer: ‘I’ve talked to some of our friends here today, who do seem to misunderstand that the UK is a single country, a single territory. I just need to get that into their heads.’

Yesterday, the Foreign Secretary Dominic Raab followed through, telling the BBC’s Andrew Marr: ‘Various EU figures, not just at Carbis Bay, but for years, have characterised Northern Ireland as somehow a separate country [from Great Britain]. It is offensive. I wouldn’t dream of talking about Catalonia or Corsica in that way.’

Powerful stuff. But there is a problem here for the British Government.

It was Boris Johnson who, having declared in August 2020 that ‘there will be no border down the Irish Sea — over my dead body’, signed up to exactly that (his aim was to avoid any kind of goods border between Northern Ireland and the Republic of Ireland). 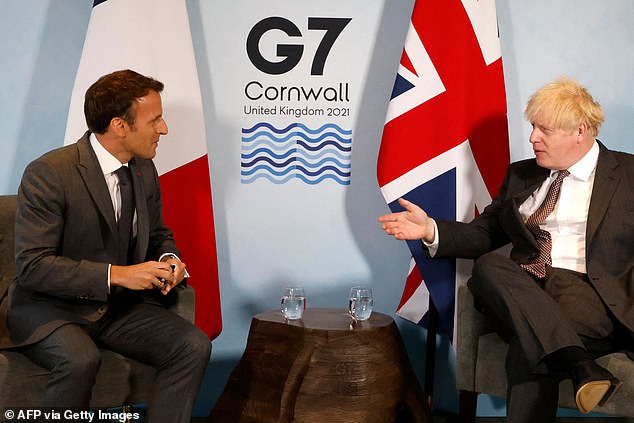 During their encounter on Saturday, Mr Johnson asked Mr Macron: ‘How would you like it if the French courts stopped you moving Toulouse sausages to Paris?’

His complaint now, that Brussels is being unexpectedly pernickety in its checks — even though there is not the slightest risk to the integrity of the single market from a Sainsbury’s in Belfast selling a sausage made in Yorkshire — seems at best disingenuous, given Johnson made his journalistic career by detailing the obsessive and unnecessary rules and regulations beloved of the EU Commission.

I don’t think the prospect of British bangers being excluded from Northern Ireland will, as Downing Street sometimes seems to suggest, seriously put ‘the peace process at risk’ via an outbreak of Loyalist terrorism.

However, it is true, as one British minister complained to me, that ‘there is an almost theological approach to single market regulations in Brussels, which they regard as much more important than peace in Northern Ireland’.

‘President Macron in particular sees any disruption to British life that can be attributed to Brexit as a desirable political objective,’ he added.

Here is the heart of the matter. The French President — who before landing in Carbis Bay summarily dismissed Boris Johnson’s desire to renegotiate or temper the Northern Irish Protocol (‘nothing is negotiable, everything is applicable’) — is, above all, determined to make Brexit as unpleasant as possible for UK traders, even if that also makes life unnecessarily difficult for French exporters.

He was open about that to Johnson’s predecessor, Theresa May. I learned that he told her in a private meeting that while he wanted the best possible bilateral relations between the UK and France, it was also essential (to him) for Britain to be seen to pay the highest price, politically and economically, for Brexit.

This has less to do with any principled devotion to the cause of an increasingly federalised European state, as sought by the European Commission, so much as pure domestic politics.

Macron’s most dangerous challenger for the presidency, in next April’s general election, is Marine Le Pen. And while Madame Le Pen does not advocate ‘Frexit’, she was an open admirer of the UK’s decision to leave: any benefit that the UK is seen to gain from its decision strengthens her anti-Brussels campaign.

More generally, President Macron sees Brexit and Le Pen as part of the same phenomenon — a ‘populist’ revolt against the elite political establishment tied to the institutions of the EU.

When asked by the BBC’s Andrew Marr in 2018 whether the French people would have voted to leave the EU, given the choice, Macron answered frankly: ‘Yes.’

The main difference, he said, was he wouldn’t risk asking the voters in the first place. 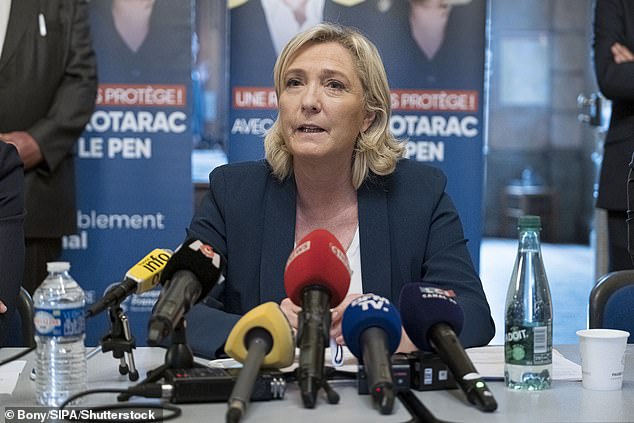 Macron’s most dangerous challenger for the presidency, in next April’s general election, is Marine Le Pen

Infuriatingly for the self-regarding Macron, a poll published a fortnight ago by the French journal Le Point revealed that Johnson is much more popular than he is … with French voters.

Not only did the British PM have a remarkably high 85 per cent ‘recognition’ factor in France — in other words, he’s big there — 51 per cent of French voters approve of him, which is way better than Macron gets from his own people.

Most maddeningly of all for the current tenant of the Elysee Palace, the same poll showed that no fewer than 74 per cent of the French believe the British Prime Minister has dealt with the coronavirus better or at least as well as Macron has.

This, clearly, is all to do with the UK’s much more impressive vaccination performance. Le Pen has seized on this, declaring that the sluggish French vaccination programme would be ‘Waterloo’ for Macron (a brutal reference to the most bitter of all French military defeats by the British).

In turn, this is intimately connected with Brexit, and whether it will be seen to be a success — Macron’s worst nightmare.

While the UK, had it remained part of the EU, could still have opted out of the over-regulated European vaccine procurement and approval programme, even as an ex-member it was invited to join in by Brussels.

The decision to go it alone turned out to be a triumphant demonstration of the gains to be made by taking an independent path unfettered by the pan-European ‘one size fits all’ bureaucratic imperative.

This clearly drove not just Emmanuel Macron but also the President of the European Commission, Ursula von der Leyen, to distraction.

At one point, she, without even consulting the Irish Taoiseach Micheal Martin, invoked Article 16 of the Northern Irish Protocol (in effect, suspended it) to set up a border between the Republic of Ireland and the North to stop any vaccines crossing from the EU to the UK.

Von der Leyen rapidly withdrew this, after a call from an irate Mr Martin (among others). But it clearly indicated that the pieties expressed in Brussels about the sacrosanct nature of the peace process and how it relates to the Northern Ireland Protocol were very easily cast aside when the Commission’s own political interests appeared threatened. 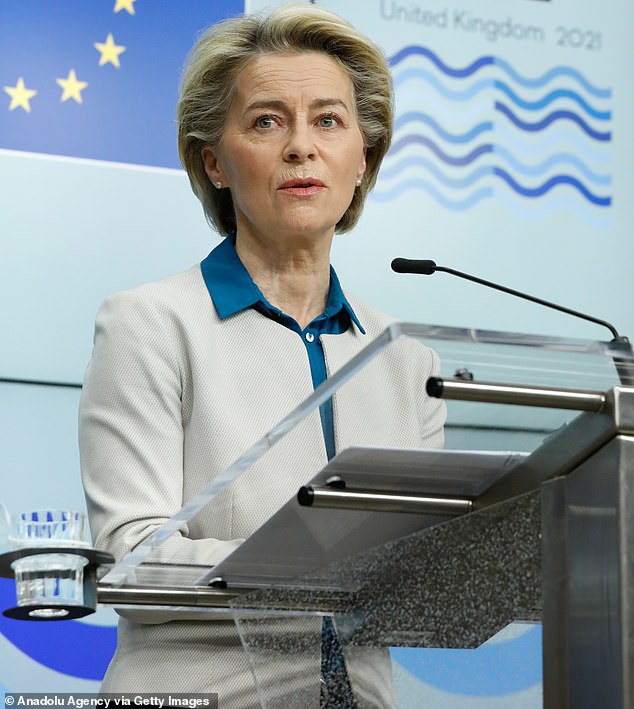 The decision to go it alone turned out to be a triumphant demonstration of the gains to be made by taking an independent path unfettered by the pan-European ‘one size fits all’ bureaucratic imperative. This clearly drove not just Emmanuel Macron but also the President of the European Commission, Ursula von der Leyen (pictured), to distraction

The embarrassment of this, and especially the way that his own citizens have observed the clean pair of heels Britain showed to the EU in the vaccine race, will have made Macron all the more determined to make the Northern Ireland Protocol a stick with which to beat bumptious Boris Johnson (as the French President sees the PM).

Obviously, the EU is not obliged to fall in with Macron’s demands for complete implacability in its discussions with the UK over the implementation of customs border checks between Great Britain and Northern Ireland.

But Brussels’ own post-Brexit strategy has long been to use the Irish border issue as a way to force the UK to remain part of its regulatory ambit (hence its current offer to show more ‘flexibility’ if London agrees to follow automatically all EU phytosanitary and veterinary regulations).

Theresa May had, through her so-called ‘Irish backstop’, fallen in with this approach. It was this which ultimately caused Boris Johnson to resign as Foreign Secretary. So he’s not likely to reverse that now. And especially not at Emmanuel Macron’s insistence.