Dominic Cummings branded Matt Hancock a serial liar today in an astonishing broadside against the Health Secretary, saying he should have been fired at the height of the pandemic.

The Prime Minister’s vengeful former chief aide turned both barrels on one of Mr Johnson’s most senior ministers, who has played a central role in tackling the coronavirus pandemic.

In a rollercoaster appearance in front of MPs today Mr Cummings outlined a series of failings by Mr Hancock and the Department of Health and Social Care.

He accused the Health Secretary, among other things, of overplaying the UK’s readiness for a massive infectious disease outbreak early last year.

And in a gobsmaking personal attack, which even took the MPs on the Commons Health and Social Care and Science and Technology Committees by surprise, he today said: ‘Like in much of the Government system, there were many brilliant people at relatively junior and middle levels who were terribly let down by senior leadership.

‘I think the Secretary of State for Health should’ve been fired for at least 15, 20 things, including lying to everybody on multiple occasions in meeting after meeting in the Cabinet room and publicly.

‘There’s no doubt at all that many senior people performed far, far disastrously below the standards which the country has a right to expect. I think the Secretary of State for Health is certainly one of those people.

‘I said repeatedly to the Prime Minister that he should be fired, so did the Cabinet Secretary, so did many other senior people.’

In a rollercoaster appearance in front of MPs today Mr Cummings laid a large part of the blame for Covid failings at the door of Mr Hancock and the Department of Health and Social Care. 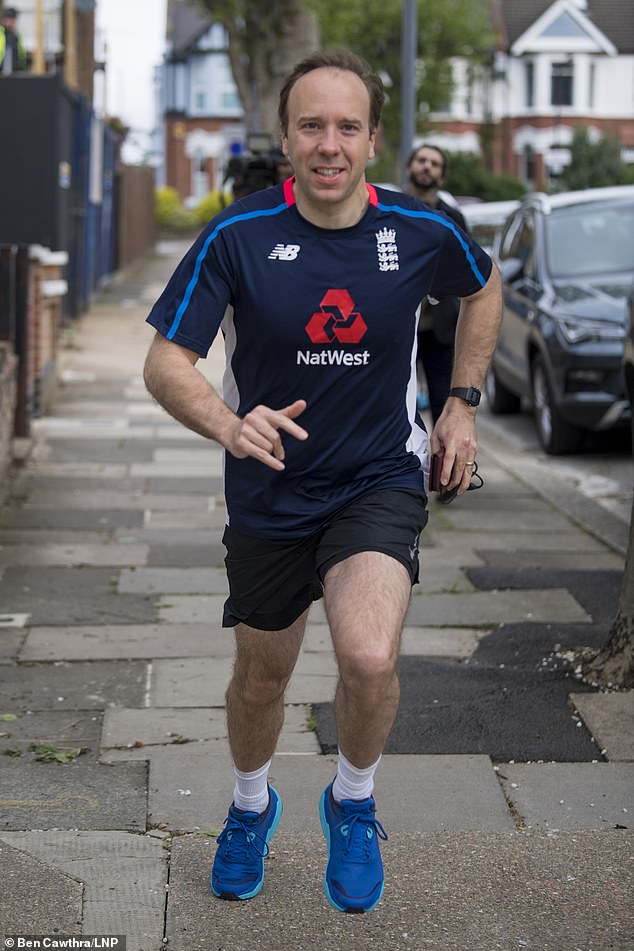 The Prime Minister’s vengeful former chief aide turned both barrels on one of Mr Johnson’s most senior ministers, who has played a central role in tackling the coronavirus pandemic.

The initial apology: ‘The truth is that senior ministers, senior officials, senior advisers like me fell disastrously short of the standards that the public has a right to expect of its Government in a crisis like this. When the public needed us most the Government failed. I would like to say to all the families of those who died unnecessarily how sorry I am for the mistakes that were made and for my own mistakes at that.’

On the lack of preparation in February 2020: ‘We didn’t act like it was important in February, let alone January…. No10 and the government were not working on a war footing in February, it wasn’t until the last week of February there was any sense of urgency.’

On Boris Johnson’s attitude to Covid: ‘In February the Prime Minister regarded this as just a scare story. He described it as the new swine flu… The view of various officials inside No10 was if we have the PM chairing Cobra meetings and he just tells everyone ”it’s swine flu don’t worry about it, I am going to get Chris Whitty to inject me live on TV with coronavirus so everyone realise it’s nothing to be frightened of”, that would not help actual serious planning.’

On the PM missing Cobra meetings: ‘Lots of Cobra meetings are just going through PowerPoint slides and are not massively useful.’

He said that then Cabinet Secretary Lord Mark Sedwill told Boris Johnson he had lost confidence in Matt Hancock’s honesty.

‘In mid-April, just before the Prime Minister and I were diagnosed with having Covid ourselves, the Secretary of State for Health told us in the Cabinet room everything is fine with PPE, we’ve got it all covered, etc, etc.

‘When I came back, almost the first meeting I had in the Cabinet room was about the disaster over PPE and how we were actually completely short, hospitals all over the country were running out.

‘I said to the cabinet secretary, please investigate this and find out if it’s true.

‘The Cabinet Secretary came back to me and said it’s completely untrue, I’ve lost confidence in the Secretary of State’s honesty in these meetings.

Mr Cummings said one of Matt Hancock’s lies was that everybody got the treatment they deserved in the first peak when ‘many people were left to die in horrific circumstances’.

Asked to provide evidence of the Health Secretary’s lying, the former chief aide to the Prime Minister told the Commons committee: ‘There are numerous examples. I mean in the summer he said that everybody who needed treatment got the treatment that they required.

‘He knew that that was a lie because he had been briefed by the chief scientific adviser and the chief medical officer himself about the first peak, and we were told explicitly people did not get the treatment they deserved, many people were left to die in horrific circumstances.’

Mr Cummings said that assurances given to him by Mr Hancock in January last year that pandemic preparations were brilliant ‘were basically completely hollow’.

The former chief aide to the Prime Minister told the Commons committee he received a response from Health Secretary Matt Hancock assuring: ‘We’ve got full plans up to and including pandemic levels regularly prepared and refreshed, CMOs and epidemiologists, we’re stress testing now, it’s our top tier risk register, we have an SR bid before this.’

Dominic Cummings laid out a detailed timetable of the disastrous response to the coronavirus threat last March.

The former aide said he warned the PM on March 12 that there were ‘big problems coming’ if self-isolation measures were not announced immediately.

He said he told Boris Johnson: ‘We’ve got big problems coming. The Cabinet Office is terrifyingly sh**. No plans, totally behind the pace, we must announce today, not next week. We must force the pace. We’re looking at 100,000 to 500,000 deaths between optimistic and pessimistic scenarios.’

But he said on that day rather than focusing on Covid the Government was consumed with a potential bombing campaign in the Middle East at the request of Mr Trump and a ‘trivial’ story in the Times newspaper about Mr Johnson, his fiancee Carrie Symonds and their dog.

He said: ‘And then to add to … it sounds so surreal couldn’t possibly be true … that day, the Times had run a huge story about the Prime Minister and his girlfriend and their dog.

‘The Prime Minister’s girlfriend was going completely crackers about this story and demanding that the press office deal with that.

Mr Cummings said on the evening of March 13 the second most senior civil servant at the Cabinet Office, Helen MacNamara, came in and relayed to him the view of another senior official that ‘there is no plan’ and ‘we’re in huge trouble’.

Mr Cummings said she told him: ‘I think we are absolutely f*****’ and warned that ‘thousands’ of people could die.

However, at around the same time there were still meetings going on with officials suggesting people should be advised to have ‘chicken pox parties’ to spread the virus more quickly.

Even in the first half of March Mr Johnson was still of the view that the threat to the economy was more significant than the public health risk.

Mr Cummings said it was like something out of disaster movie Independence Day, where star Jeff Goldblum says the plan had failed and there needs to be a new one.

Mr Cummings told the committee: ‘I would like to stress and apologise for the fact that it is true that I did this but I did not follow up on this and push it the way I should’ve done.

‘We were told in No 10 at the time that this is literally top of the risk register, this has been planned and there’s been exercises on this over and over again, everyone knows what to do.

‘And it’s sort of tragic in a way, that someone who wrote so often about running red teams and not trusting things and not digging into things, whilst I was running red teams about lots of other things in government at this time, I didn’t do it on this.

‘If I had said at the end of January, we’re going to take a Saturday and I want all of these documents put on the table and I want it all gone through and I want outside experts to look at it all, then we’d have figured out much, much earlier that all the claims about brilliant preparations and how everything was in order were basically completely hollow, but we didn’t figure this out until the back end of February.’

Dominic Cummings said scientists on Sage and officials in the Department of Health were ‘completely wrong’ to assume the British public would ‘not accept the lockdown’ or a test and trace system.

He said: ‘Those two assumptions were completely central to the official plan and were both obviously, completely wrong.’

He said this was raised with the Prime Minister and Boris Johnson was told: ‘This assumption that the public won’t… basically aren’t that frightened and don’t want to have a lockdown is false, and we should abandon it.’

Mr Cummings gave an extraordinary account of the catastrophic response to Covid today – revealing that Boris Johnson viewed it as a ‘scare story’ just a month before the first lockdown and describing the dramatic moment when a top civil servant admitted: ‘We are absolutely f*****.’

The maverick former No10 chief admitted the government – and he personally – ‘fell disastrously short’ in its response to coronavirus as he kicked off a titanic hearing with MPs on coronavirus.

Mr Cummings conceded he should have been ‘hitting the panic button’ in mid-February but he had been ‘wrongly reassured’ by messages from the WHO and others about the situation in China.

The government was certainly not on a ‘war footing’ at the time, with senior figures including Mr Johnson himself going on holiday. ‘Lots of key people were literally skiing in mid-February,’ he said.

And he said Mr Johnson regarded the pandemic as a ‘scare story’ and the ‘new Swine Flu’ at that stage, and had even suggested he could be injected with the disease live on TV by medical chief Chris Whitty to show people it was not a threat.

In a detailed timeline from March 12, which he described as a ‘crazy day’, Mr Cummings said he was urging moving faster towards ordering people to stay at home.

At 7.48am he said he texted the PM and said the Cabinet Office was ‘terrifyingly sh**’ and the response should be stepped up immediately.

However, on the same day Donald Trump was trying to persuade the UK to join a bombing raid in the Middle East.

And Carrie Symonds was ‘going crackers’ at the PM over a ‘trivial’ story in the papers about their dog Dilyn.