Dominic Cummings is set to rain fire on Boris Johnson today as Westminster braces for a titanic hearing with MPs on coronavirus.

The maverick former No10 is preparing to launch an all-out assault on his former friend and boss in four hours of evidence to a joint session of the Commons health and science committees.

He is expected to accuse Mr Johnson of referring to Covid as ‘Kung-Flu’ and say that – before coming down with the virus – he offered to be injected with it live on TV to ‘show it’s nothing to be scared of’.

In extraordinary claims that he says will be backed by documents, he will accuse the Prime Minister of being responsible for ‘thousands of deaths’ by delaying a second lockdown when a second wave of the virus hit the UK in the winter.

He is also set to allege that Mr Johnson did say ‘no more f****** lockdowns, let the bodies pile high in their thousands’ – something the PM has flatly denied. And he could also claim Mr Johnson was slow to react to the pandemic because he was on a ‘prolonged holiday’ with partner Carrie Symonds in February last year.

However, ministers have been frantically trying to blunt the attack from Mr Cummings, with Transport Secretary Grant Shapps dismissing the session as a ‘sideshow’ and suggesting he has his ‘own agenda’.

Meanwhile, leaked WhatsApps reportedly show that Mr Cummings told politicians to deny that there was a ‘herd immunity’ strategy at the start of the pandemic – something he now says was the case until just 10 days before the first lockdown.

Mr Cummings is expected to be accused by Tory MPs of using today’s appearance before a select committee to ‘avenge’ his sacking in November after he lost a power struggle with Ms Symonds.

But Labour will seize on the claims as evidence that Mr Johnson could have done more to save lives. 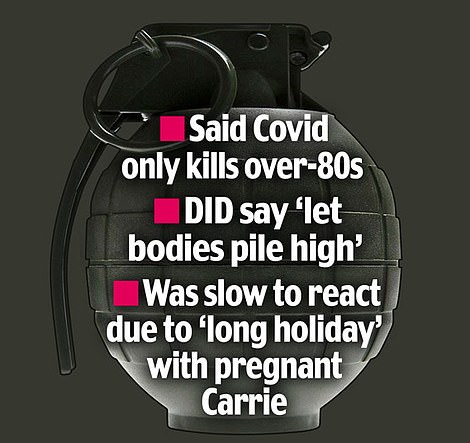 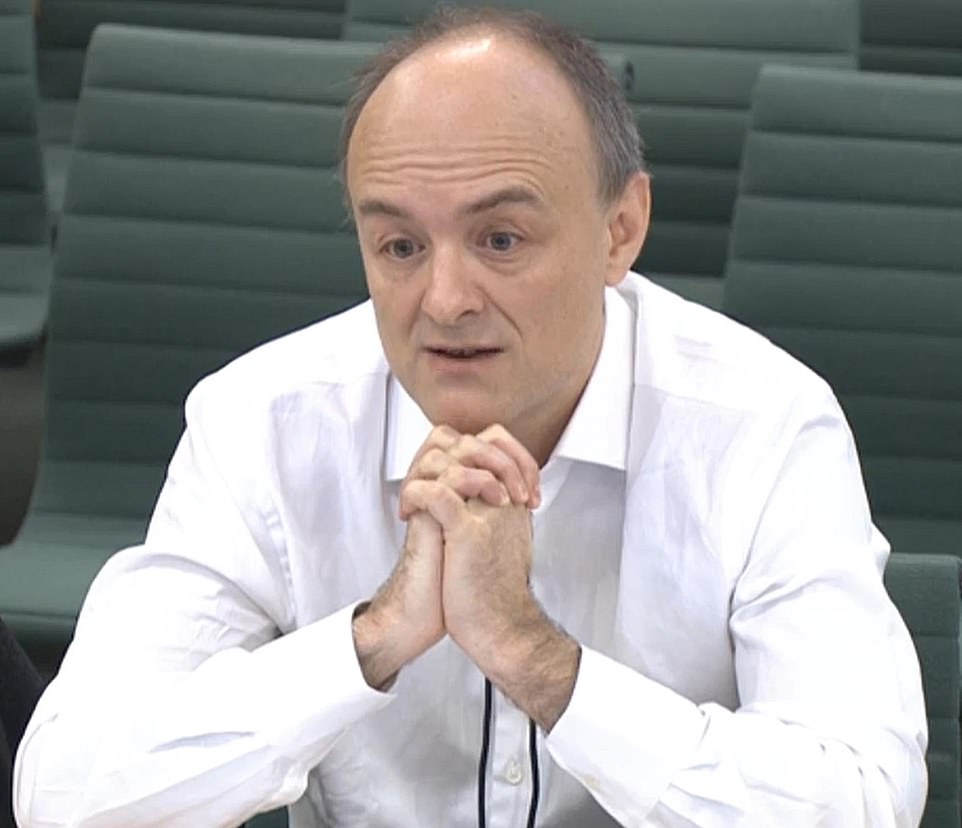 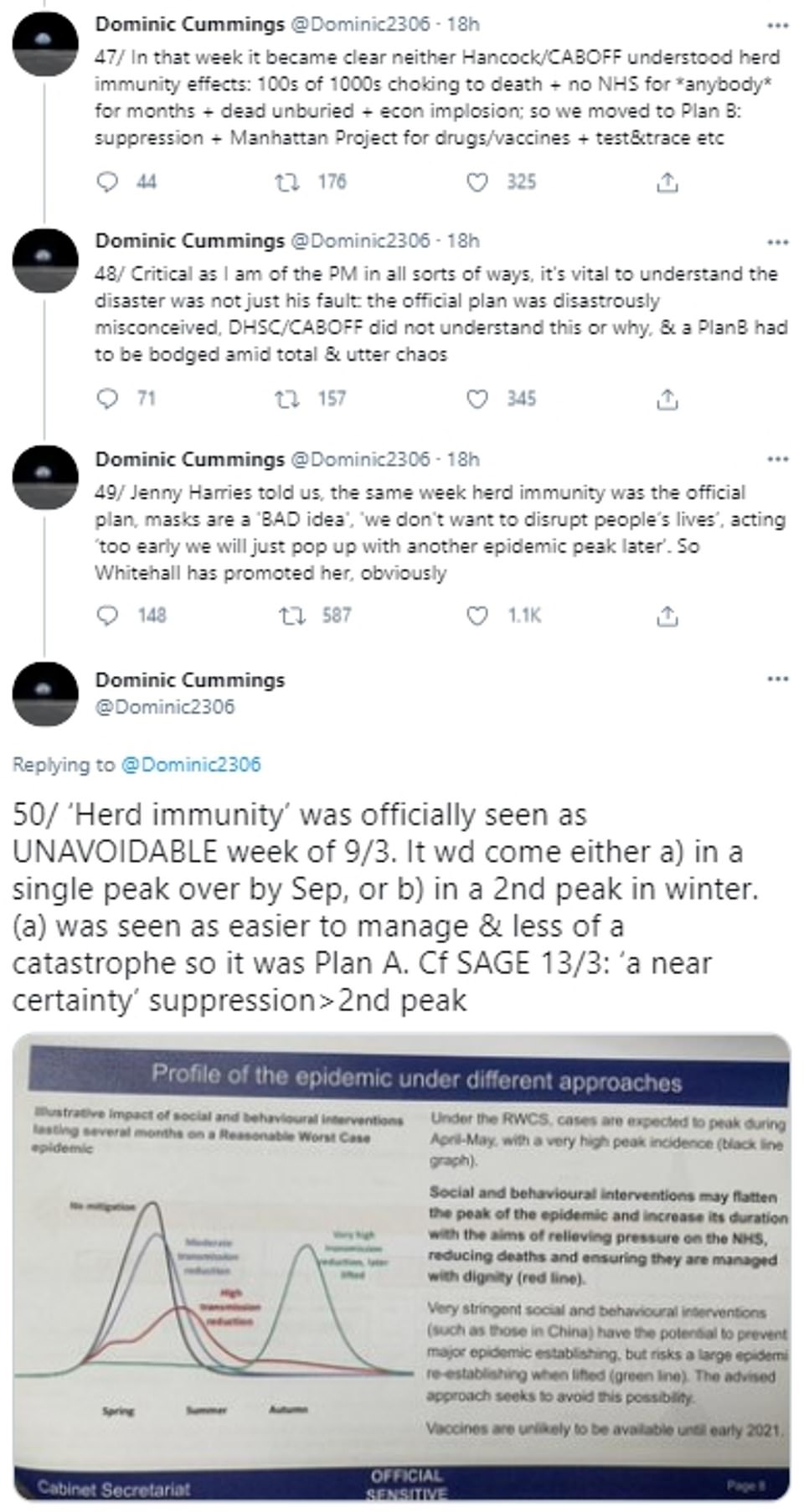 Dominic Cummings posted a chart claiming that COBR documents had the ‘optimal single peak strategy’ showing 260,000 dead because the system was ‘so confused in the chaos’ 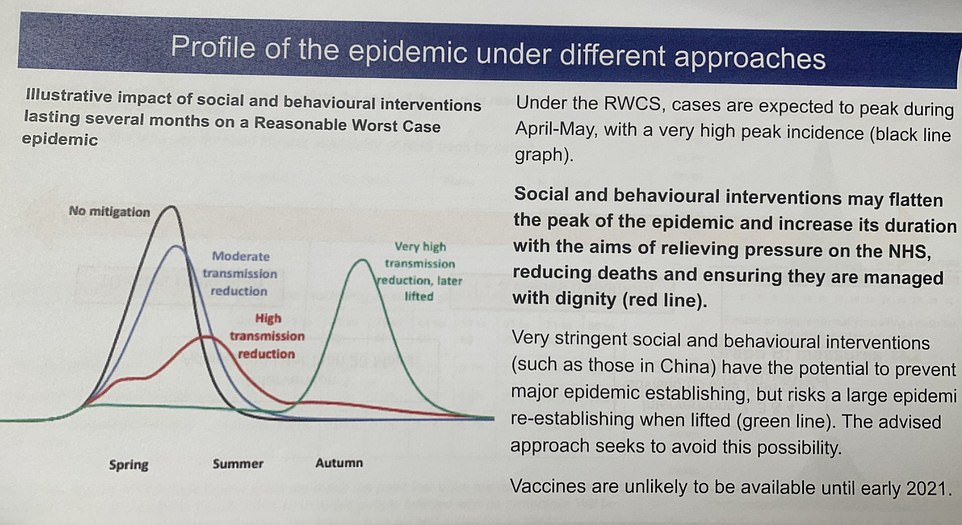 Mr Cummings’ claim that Mr Johnson referred to Covid as ‘Kung-Flu’ will be seized on by those who criticise the Prime Minister’s politically incorrect language.

The term was coined by Donald Trump in June last year, at which stage the full force of the pandemic had not hit America. By contrast, it had claimed 40,000 lives in the UK.

Dominic Cummings has set up his appearance before MPs today with a series of revelations – all of them contested by No10 – about the handling of the pandemic in recent days. Among them are:

Mr Trump’s ‘Kung-Flu’ jibe was part of his attempt to pin the blame for the pandemic on China.

Mr Cummings’ allegation that Mr Johnson said he was willing to be injected with Covid to reassure the public is likely to cause a major controversy.

The Mail has learned that Mr Cummings will claim the PM said: ‘I’m going to get Chris Whitty (Chief Medical Officer) to inject me with it live on national TV so everyone can see it’s nothing to be scared of.’ He will tell MPs the PM made the remark on repeated occasions.

In April, Mr Johnson nearly died after he was infected with Covid.

Mr Cummings will also argue that while publicly urging everyone to take the pandemic seriously, privately Mr Johnson downplayed the risks it posed to most people. He will tell the committee the PM said: ‘Covid is only killing 80-year-olds.’

While being at odds with Mr Johnson’s public comments, the statement is borne out by statistics which show the overwhelming majority of people who have died from Covid are over 80.

Mr Cummings will also claim that despite agreeing to order the first lockdown, Mr Johnson later said he regretted having done so.

This was one of the reasons Mr Johnson delayed ordering a second lockdown in the winter, his former aide will claim.

It was after finally agreeing to a second lockdown that Mr Johnson reportedly said: ‘No more f****** lockdowns, let the bodies pile high in their thousands.’

Mr Cummings will say that he and others heard a frustrated Mr Johnson make the remark, first reported last month by this newspaper, moments after leaving the Downing Street meeting where he had approved the second lockdown.

Mr Cummings will also say that before the decision, Mr Johnson vowed: ‘I’m going to be the mayor of Jaws, like I should have been in March (when the first lockdown was ordered).’

The Prime Minister has said that he regards the mayor in the Jaws movie – who refuses to close the resort’s beach even after a shark has killed tourists, for fear of damage to the local economy – as one of his ‘heroes’. 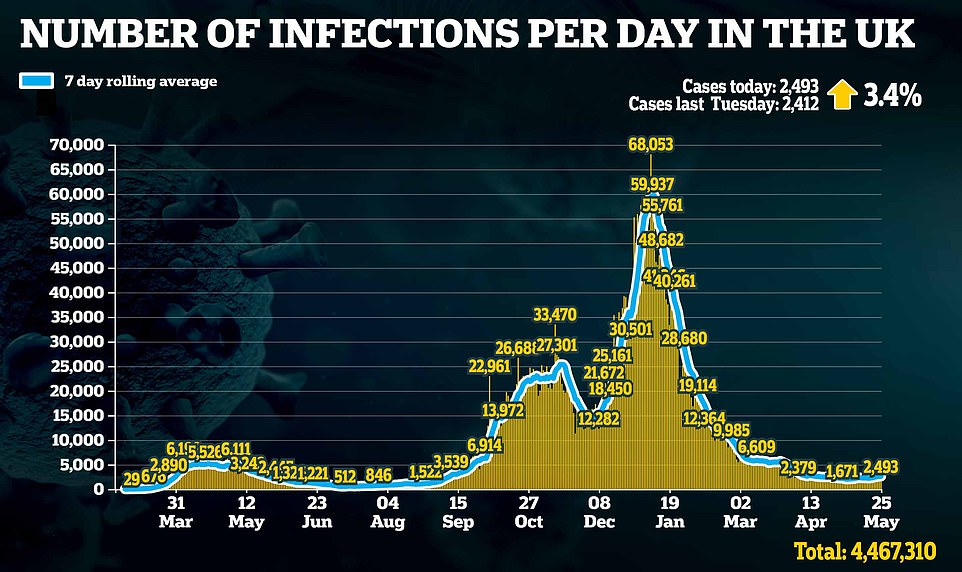 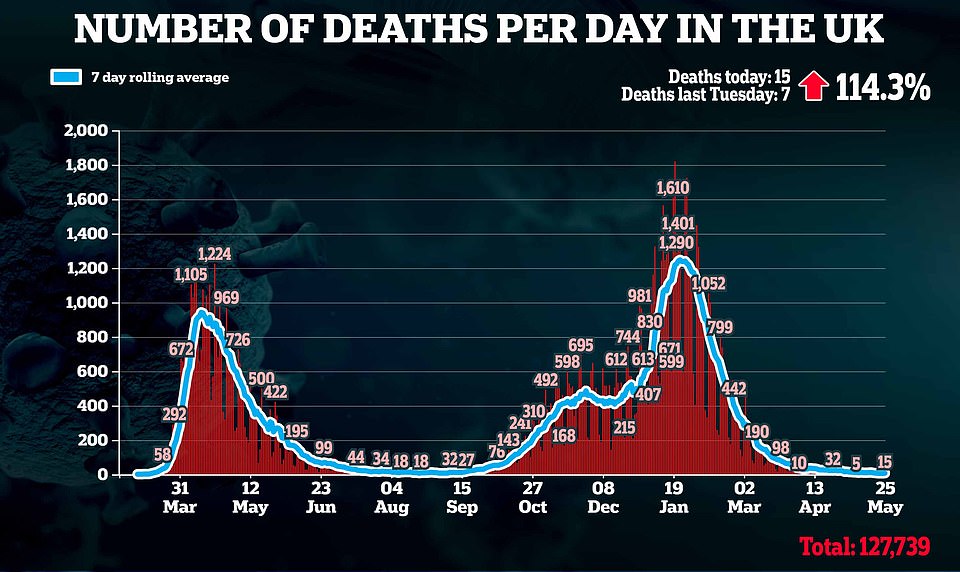 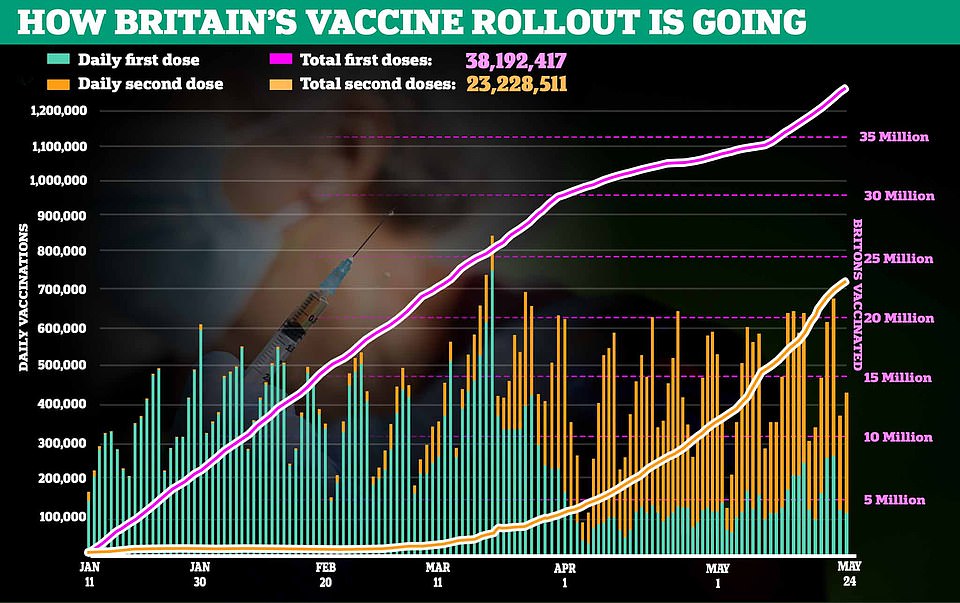 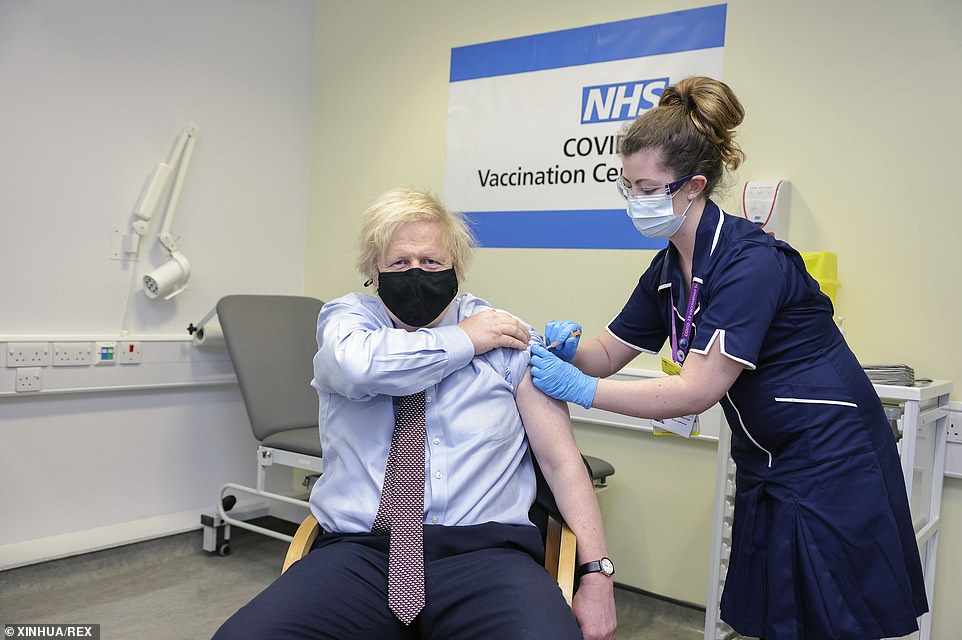 Boris Johnson (L) is given the Oxford-AstraZeneca COVID-19 vaccine by a nurse at St Thomas’ Hospital in London, March 19

In a round of interviews this morning , Mr Shapps has dismissed Mr Cummings’ appearance before MPs as a ‘sideshow’ and suggested the former No 10 aide ‘has his own agenda’.

‘I’ll leave others to determine how reliable a witness to all this he is,’ Transport Secretary Mr Shapps told Sky News.

‘He was there at the time, what his motives would be I will leave to others.’

Most people are interested in getting their vaccine rather than the ‘sideshow over a former adviser who has his own agenda, presumably’, Mr Shapps said.

Mr Shapps was asked on LBC radio if he had ever heard the Prime Minister use the term ‘kung flu’.

Asked if he had heard the Prime Minister say he wanted to be infected live on TV, Mr Shapps said: ‘No, never, again no.’

Mr Shapps added: ‘It’s a bit of a circus from someone who was there at the time and had the facility and the ability to influence a lot of these decisions, of course.’

Meanwhile, WhatsApps from March last year leaked to Politico are said to suggest that Mr Cummings ordered ministers to deny that the government had a ‘herd immunity policy’.

Instead he reportedly suggested they should portray it as a secondary, long-term effect of the ‘mitigation’ approach of limiting the spread of the virus.

A source close to Mr Cummings told the Mail: ‘From March through to the autumn, the PM said we should never have locked down. That was why he was so reluctant to do it again in November.

‘He said, ‘the big danger is not Kung-Flu but the harm caused in trying to stop it. I was right all along and should not have been pushed into the first lockdown. The economic damage caused by lockdowns is more damaging than the loss of life caused by Covid’.’

Mr Cummings’ extraordinary view is that by delaying a second lockdown, Mr Johnson is responsible for thousands of deaths.

Mr Cummings will tell MPs that one of the reasons Mr Johnson was late in reacting to the crisis was because he was on a ‘prolonged holiday’ with Miss Symonds at Chevening in Kent, one of the ministerial grace-and-favour homes, and had ‘personal distractions’. The couple stayed at Chevening in February after spending Christmas and the New Year in the Caribbean after the 2019 election.

MPs will be told by Mr Cummings that Mr Johnson did not want to interrupt the Chevening break, where they were ‘planning to announce their engagement and Carrie’s pregnancy’.

The announcement was made on February 29, days before the first Covid death was reported in Britain.

Mr Cummings will also take aim at Health Secretary Matt Hancock over claims that the Government initially planned to use ‘herd immunity’ to combat Covid.

The former No 10 aide is believed to be ready to hand over a key document which he says upholds his claim that Mr Hancock’s initial plan could have led to 250,000 deaths and there being ‘no NHS for months’.

Contrary to recent reports, Mr Cummings does not have tape recordings of private conversations with the Prime Minister. But he does have a large quantity of WhatsApp and text messages from senior Downing Street figures.

A Downing Street spokesman said last night: ‘Throughout this pandemic, the Government’s priority has been to save lives, protect the NHS and support people’s jobs and livelihoods across the United Kingdom.

‘There is a huge task for this Government to get on with. We are entirely focused on recovering from the pandemic, moving through the roadmap and distributing vaccines while delivering on the public’s priorities.’

Daily coronavirus cases have crept up slightly again today in the UK, with 2,493 tests recorded in the country — a 3.4 per cent rise on last week.

It continues a seven-day trend of rising case numbers, although overall the infection rate remains low despite the rapid spread of the Indian variant.

Deaths with Covid also increased today to 15, up from just seven on Tuesday last week. The large week-on-week rise of 114 per cent is likely to be just a blip because of day-to-day fluctuations in registrations.

And Britain’s mammoth vaccination drive has continued at pace, with 122,379 first doses dished out on Monday, taking the overall number to nearly 38.2million. Some 332,955 second doses were also given out yesterday, with more than 23.2million people in the country now fully vaccinated.

The figures come after separate official data released today showed weekly Covid deaths had fallen to their lowest level since before the first lockdown last March in England and Wales.

Office for National Statistics (ONS) data showed 73 virus fatalities occurred across the two countries in the week ending May 14 — the fewest since the seven-day spell that finished on March 13, 2020 (44) and a fall of 32 per cent on the previous week (108).

Weekly Covid registered deaths increased slightly, from 129 to 151. But experts said this was because of the bank holiday weekend at the start of the month, which skewed data because some of the deaths occurring on that weekend were not recorded until the following week.