Dolly Parton made a show-stopping appearance as she glamorously arrived at the 2022 Rock and Roll Hall of Fame ceremony in Los Angeles earlier Saturday evening.

Along with the 76-year-old iconic country music singer, Pink, 43 and Olivia Rodrigo, 19, opted for style as they led celebrities on the star-studded red carpet.

The special ceremony was held to induct a total of 14 new members into its renowned Hall of Fame, including Dolly, Pat Benatar, Eminem, and Duran Duran.

The Jolene performer donned an eye-catching fitted dress with silver embellishments hanging from the black fabric.

Her blonde hair was classically styled in elegant curls, allowing her locks to flow down just past her shoulders.

Dolly slipped into a pair of black, platform heels made with see-through material at the top.

The talented singer looked incredibly youthful as she flashed a big smile for the cameras on the star-studded red carpet.

Honoree: The Jolene singer was inducted into the Rock and Roll Hall of Fame earlier on Saturday 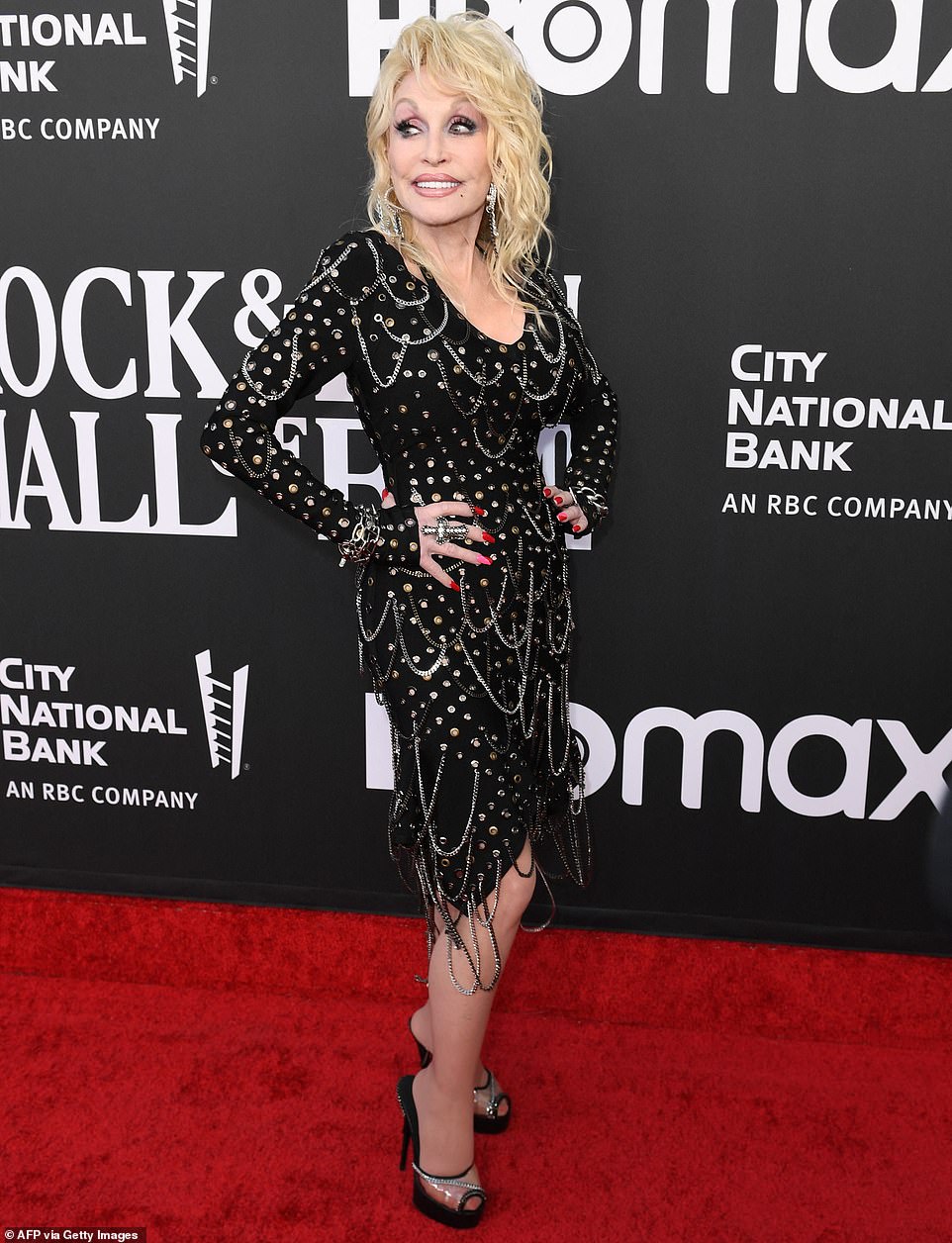 So youthful: The Grammy award-winning performer turned heads as she posed for a quick photo session at the ceremony

Dolly was inducted into the Rock and Roll Hall of Fame earlier on Saturday at the annual event.

The country music star, known for hits such as 9 to 5 and Here You Come Again, debuted her first album in 1967.

Since then, the talented entertainer has remained a prominent figure in the music industry.

Dolly has received a total of 11 Grammys, along with a whopping 50 nominations, throughout the course of her career. Along with singing, the beauty has also been recognized for her songwriting.

The singer was inducted into the Country Music Hall of Fame in 1999, but initially was hesitant to enter the Rock and Roll Hall of Fame when she received the esteemed nomination this year. 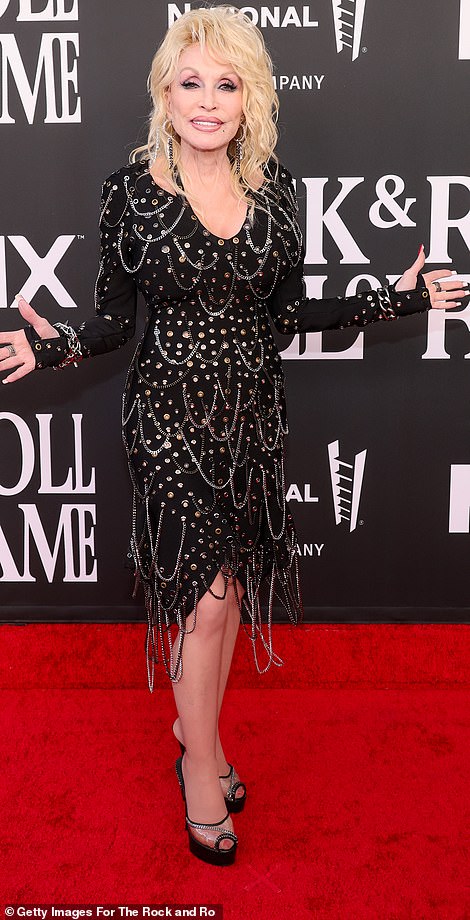 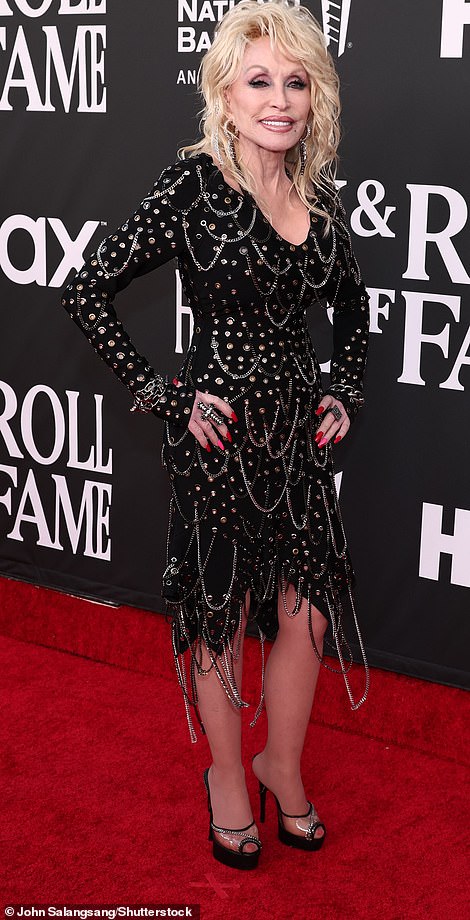 Talented: Dolly was previously inducted into the Country Music Hall of Fame years ago in 1999, and was initially hesitant to accept the nomination to enter the Rock and Roll Hall of Fame 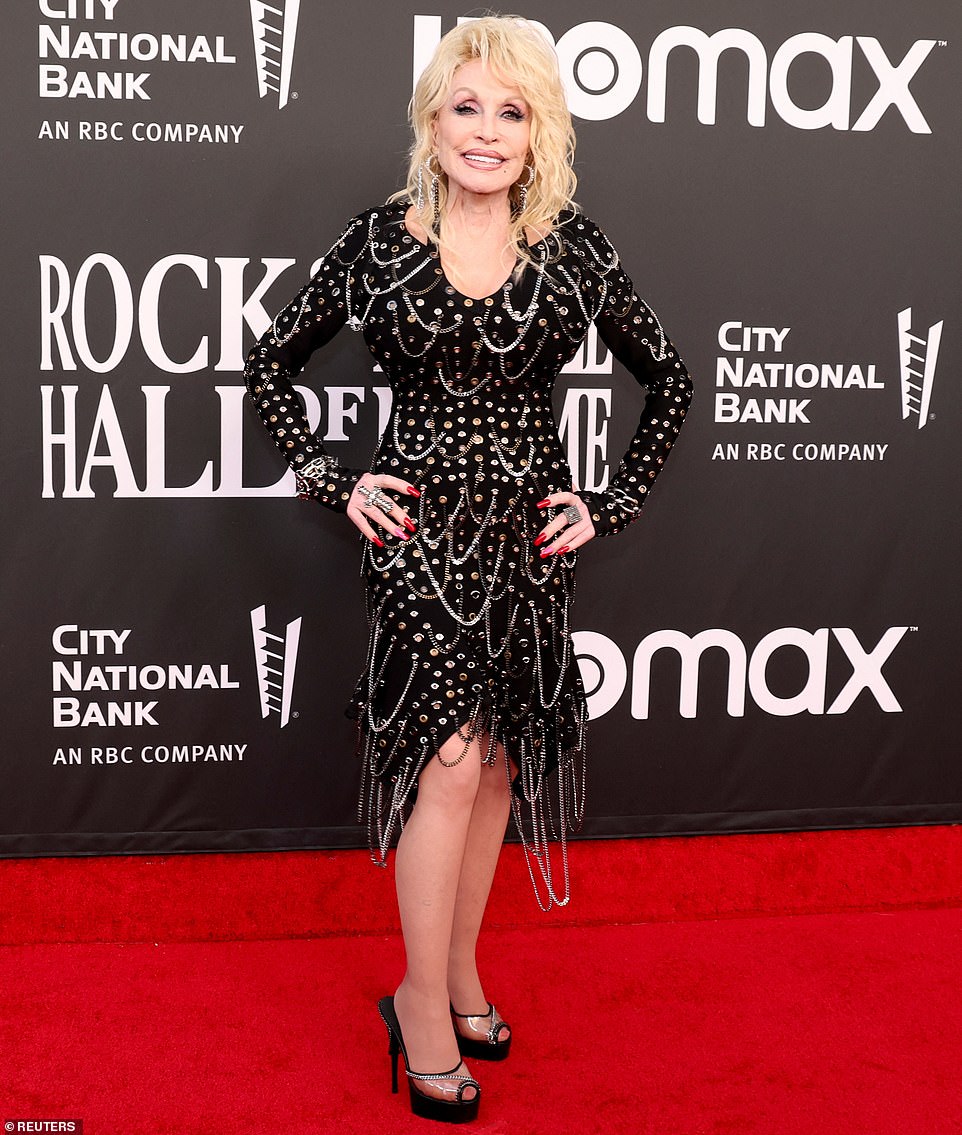 Honored: Dolly informed People that she was honored for the nomination and will ‘accept gracefully’

Dolly recently spoke to People about her induction, and expressed that she will ‘accept gracefully.’

‘I have written a song just for the ceremony, based on the whole story,’ she stated, adding, ‘I’m gonna get to perform that.’

She also revealed plans to create a rock n’ roll album in the future, ‘and I’m gonna pull people from the rock ‘n’ roll field to sing with me on it.’

Pink was also in attendance as a special guest at the ceremony. The Just Give Me A Reason hitmaker donned a long-sleeved, silver and black dress.

The zebra patterned, shimmering gown contained a small slit on the left side, giving a glimpse of her edgy, sleek boots. 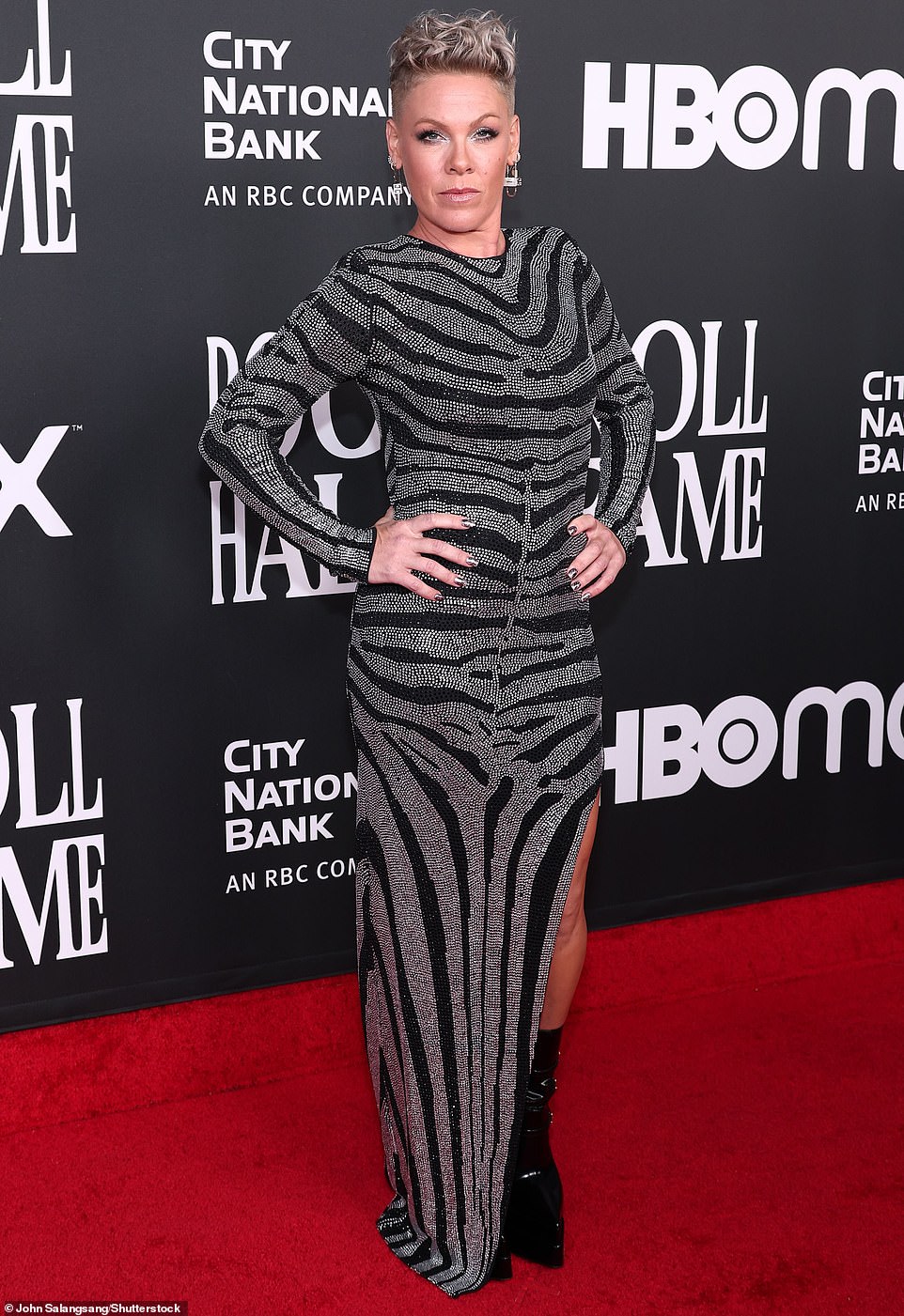 Other guests: Pink was also in attendance at the 2022 Rock and Roll Hall of Fame ceremony in Los Angeles

Stylish: The star donned a shimmering zebra-patterned dress with a pair of sleek, platform boots to complete her overall look 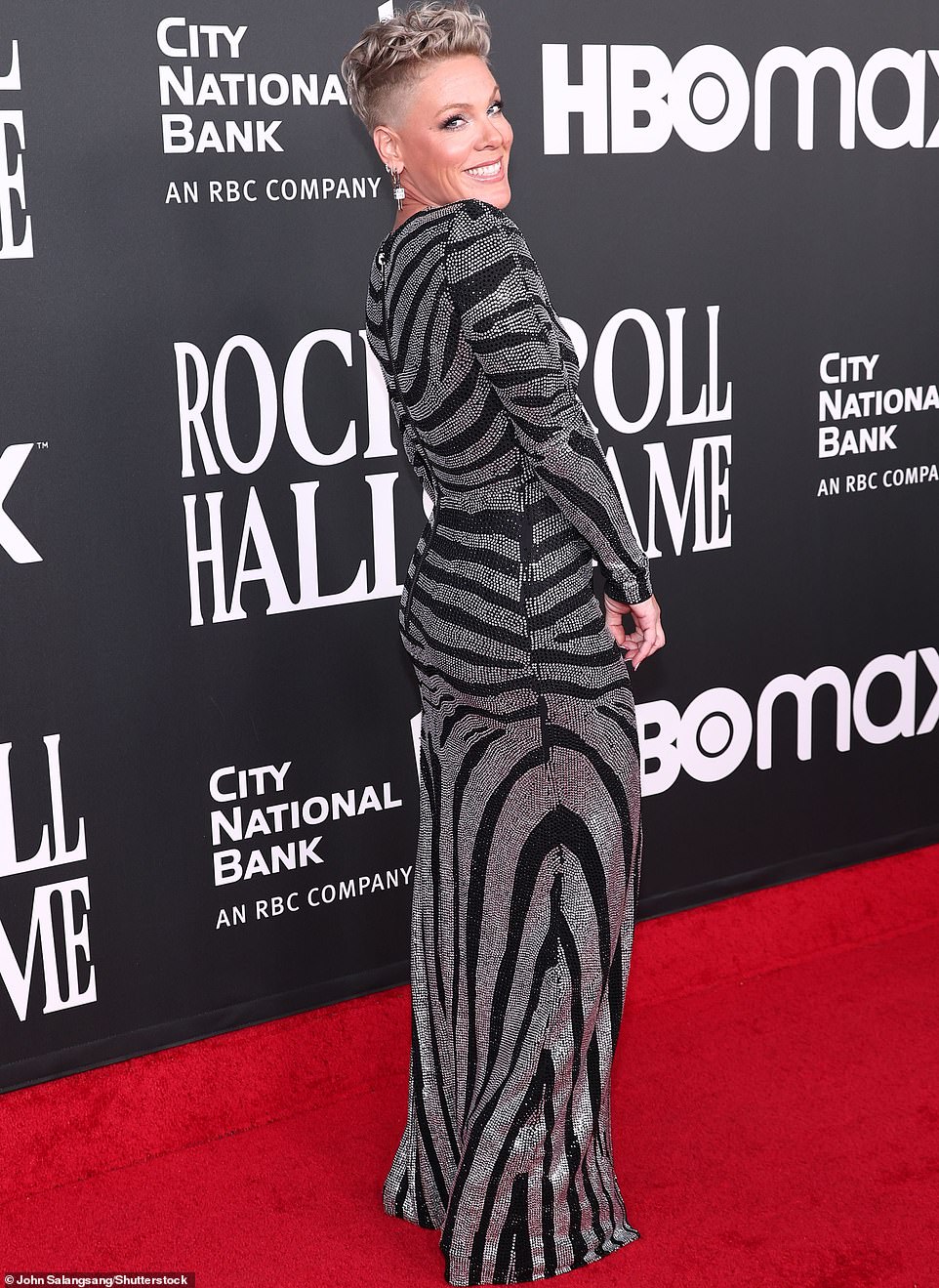 Closer look: The beauty showed the back side of the dress as she sent a smile to the cameras on the red carpet 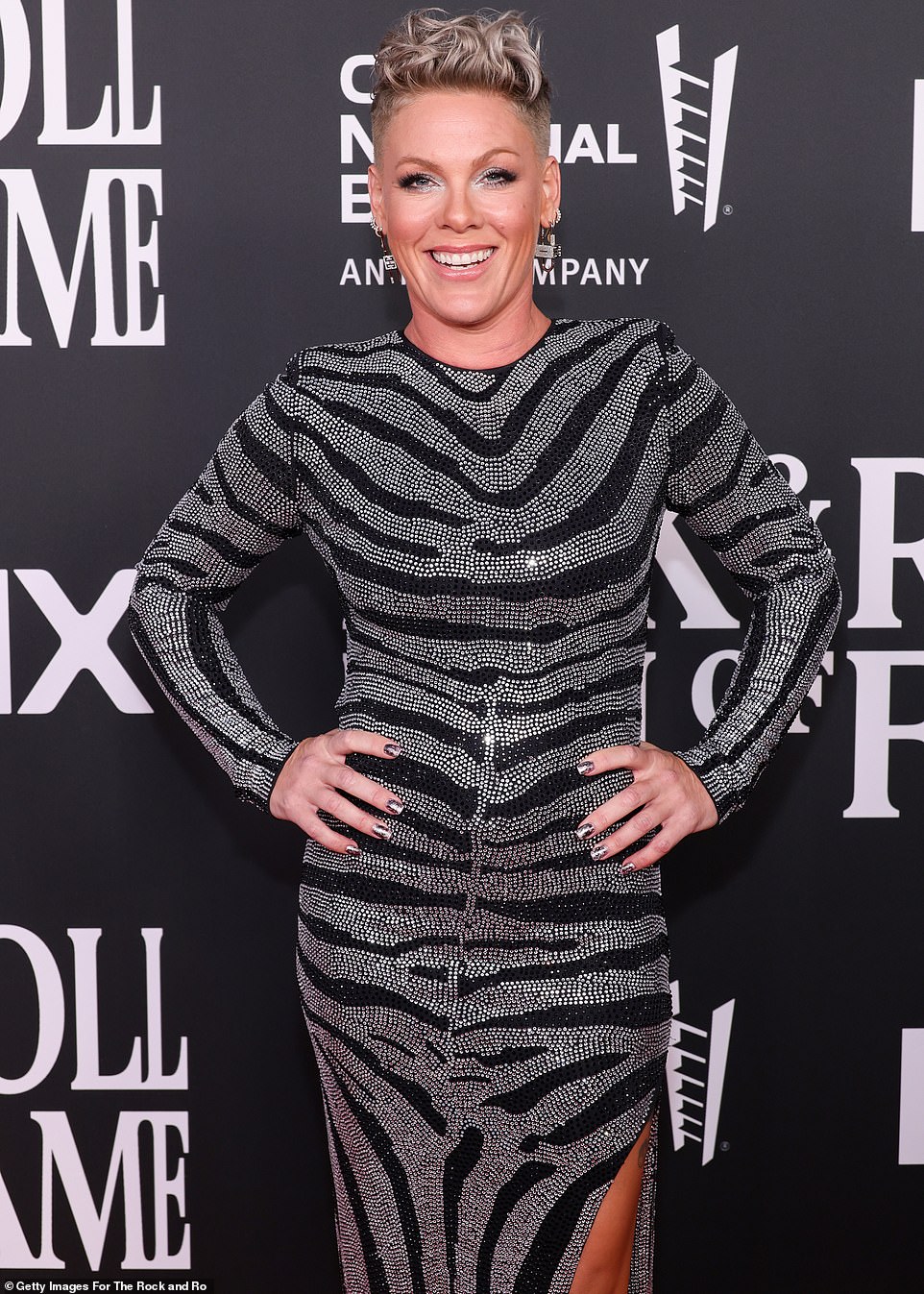 Sparkling: The So What performer opted for an eye-catching dress that sparkled under the bright lights

Her short blonde hair was styled in waves, showcasing her lock-shaped earrings to accessorize her look for the big night.

Olivia Rodrigo, known for hits such as, good 4 u, kept her look fashionable yet more on the casual side.

The singer and actress opted for a dark gray backless dress with a pleated skirt. She added a pair of sheer, over-the-knee socks secured with garters.

She slipped into a pair of shiny black shoes with a small heel, and accessorized her look with a black choker with a large, silver embellishment. 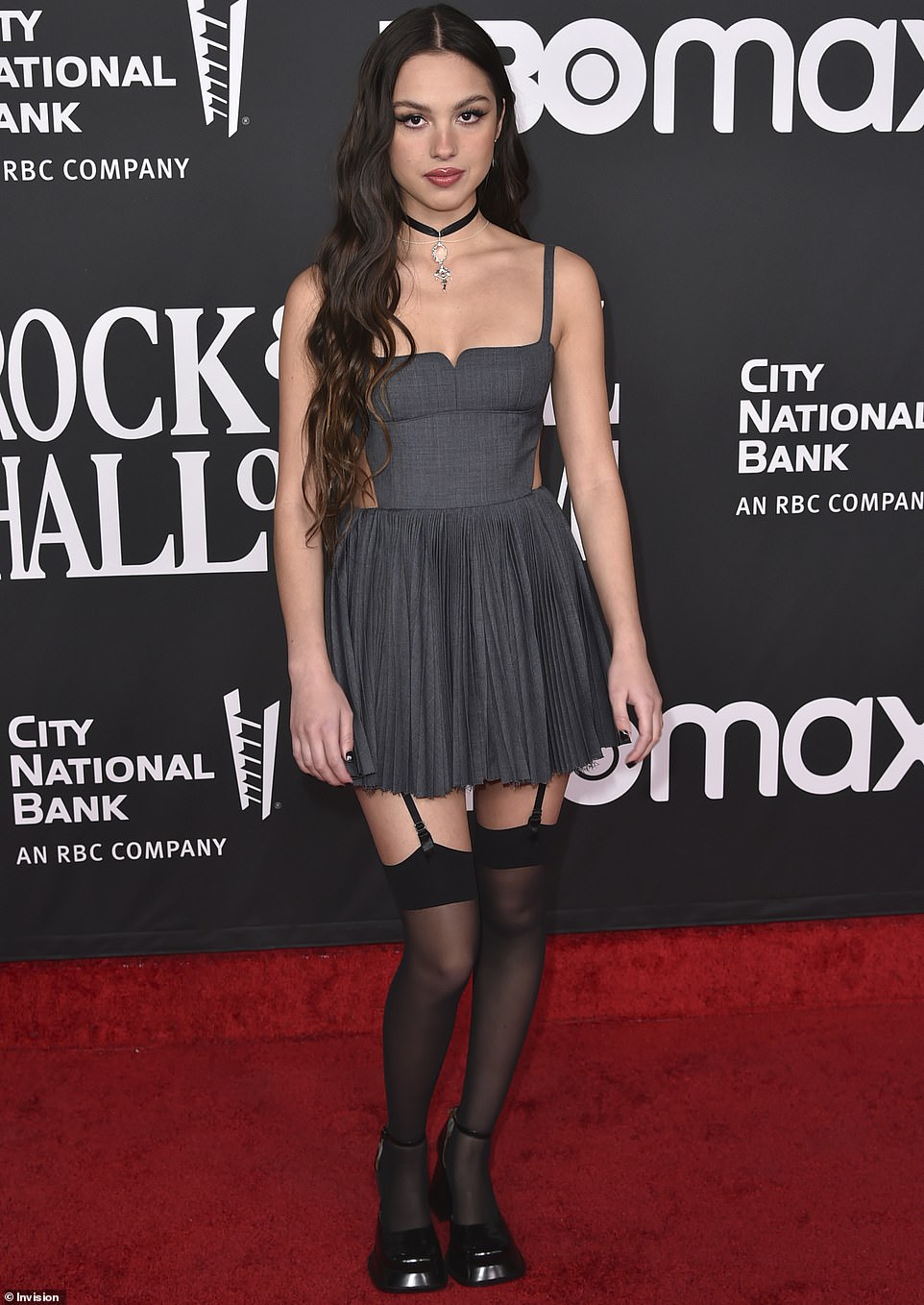