We’ve been barking up the wrong tree when it comes to dogs’ tails! Appendages play little or no role in running or jumping – and are more likely used for communication, study claims

By Eirian Jane Prosser For Mailonline

Dogs’ tails play little or no role in their acrobatic movements and are more likely used for a communication, a study has found.

For the past decade an international team of scientists have been investigating the use of dogs’ tails and what it really means when they approach us wagging.

Some animals have a proven need for their tails, such as lizards and squirrels who use theirs to cling onto trees.

Equally, while cats do not use their tails to hang off branches, their tails are vital in keeping their balance while they are making fast and tight turns hunting in the wild.

Dogs’ tails play little or no role in their acrobatic movements and are more likely used for a communication, a study has found (stock image)

What does a dog’s wag mean?

According to creators of TailTalk, a device that tracks dogs’ tail movement to tell owners how they are feeling, this is what a dogs wag means:

Previous studies have suggested that dogs, who stay on the ground, use their tails for agile movements such as running and jumping.

However, the new study shows this is not the case.

The research, conducted by Dr Ardian Jusufi at the Max Planck Institute for Intelligent Systems in Stuttgart, observed ‘25 different breeds across the Canidae family’ using a mathematical model to check what happens when dogs move their paws, legs, tails and the twist and turns of their torso.

Researchers collected data from a previous study where Border Collies, known to be the most intelligent dog breed, were fitted with tracking suits.

The dogs would then jump over hurdles while their motions were detected and tracked to show individual movements.

While dogs’ tails are not used to help them as they run or jump, they are used for communication – most commonly using a positive tail wag as a social cue for friendliness, and for batting off pests such as flies.

The research was published on BioRxiv preprint server titled ‘Tail wags the dog is unsupported by biomechanical Modeling of Canidae Tails Use during Terrestrial Motion’, but has not yet been peer-reviewed.

It concluded: ‘The utilizing of the tail during jumping mechanisms achieves very low amounts of center of mass movement across all species with the largest being under a single degree.

‘We believe that this implies that dogs utilize their tails for other means, such as communication and pest control, but not for agility in maneuvers.’

Across the dog family, it appeared that moving the tail while jumping had almost no impact on the dog’s pathway as it leapt into the air, changing the dog’s trajectory by an extremely small degree. 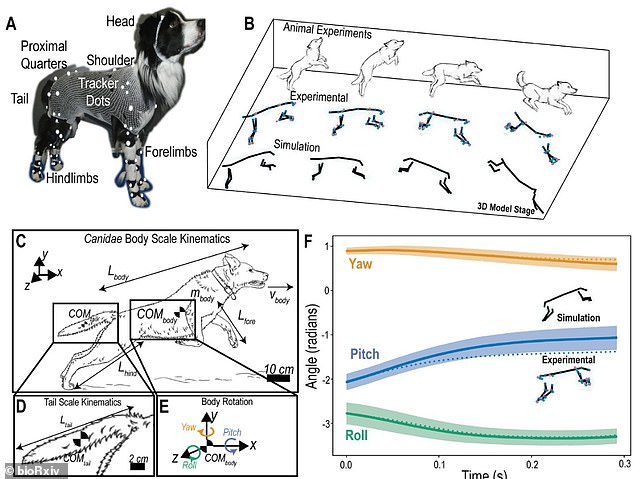 Data collected from a previous study fitted Border Collies with a suit containing tracking beads for image analysis and tracking. They were then told to perform jumps over hurdles, while their motions were captured 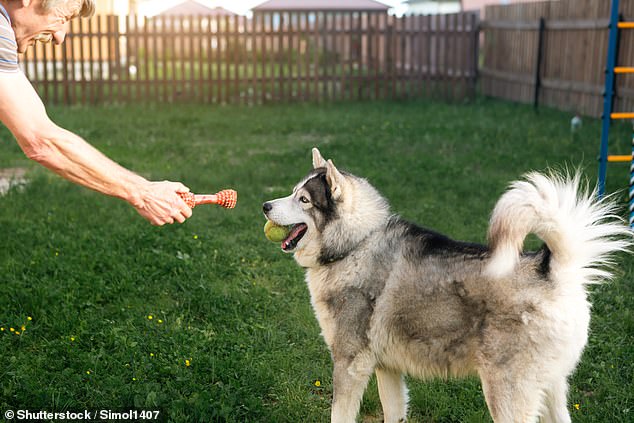 Last year, a study from the Chinese Academy of Sciences in Beijing found that dogs’ tails tend to go to the right when the dog is with someone familiar (stock image)

Last year, a study from the Chinese Academy of Sciences in Beijing found that dogs’ tails tend to go to the right when the dog is with someone familiar.

Researchers observed a group of dogs for three days and found that as soon as the dogs got to know a person, they would start wagging their tails more frequently to the right and less to the left.

The lead researcher of the study, Dr Yong Q Zhang, suggested the right-sided wagging is linked to the left side of the brain, where positive emotions are processed.

This suggests it is a sign the dog is feeling happy or comfortable, while the opposite could mean the dog feels scared or nervous.

If you enjoyed this article, read more …

Dogs chasing their own tails could be a sign of OCD and not a fun game, say researchers

What a wag! Dogs’ tails move to the right when they are with humans they love, research suggests

WHAT YOUR DOG’S BREED SAYS ABOUT YOU 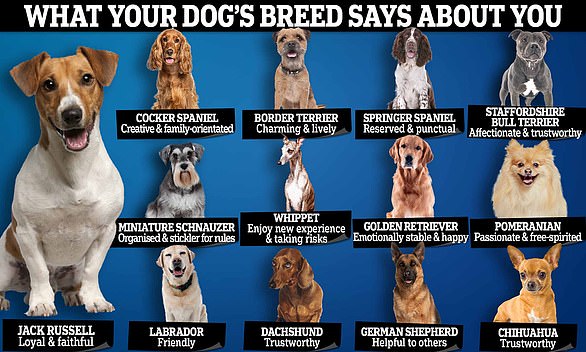 There are links between some of the UK’s most popular breeds and the dominant personality traits shown by their owners, says a study from The Kennel Club