Ruff day! Dog owner reluctantly wades barefoot into a slimy pond to retrieve pet who wants to keep playing with the fountain in the middle

Hilarious video shows a dog owner resigning himself to the fact he needs to fetch his pet who is having fun in the middle of a slimy pond.

Kane Baker from Paignton, was videoed plodding into the pond to persuade his dog, called Bella, who is having a whale of a time, to come away from playing in the fountain.

The start of the footage shows Kane, who’s stripped to his underwear, turning up the bottom of his white shorts, as he realises the task in front of him.

Kane Baker from Paignton, was videoed plodding into the pond to persuade the dog, called Bella, who is having a whale of a time, to come away from playing in the fountain

He walks towards the edge of the pond and places his hands on his hips as he gazes out, deciding whether he is actually going to have to step foot in the water.

‘It’ll be cold,’ says a voice off camera.

‘Please tell me you are cold and want to get out before I get in,’ Kane says to his dog, who at this stage is off camera.

‘She doesn’t want to get out,’ says the woman off camera. ‘Come on Kane, in you get,’ says a man’s voice.

With a splash, Kane enters the water and with his head down plods into the centre of the pond.

A voice off camera shouts at Kane: ‘Bloomin’ hero.’ 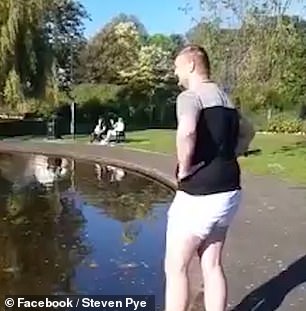 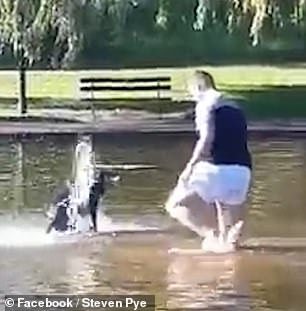 Bella, who is enjoying playing in a small fountain in the middle of the pond, comes into shot. She enthusiastically jumps up and down in the water.

Kane continues to wade slowly towards her and at one point puts his hands up.

Bella crouches underneath and is sprayed with water, while Kane also gets sprayed.

He manages to get hold of the dog’s collar and begins to lead her, as she looks back longingly towards the fountain.

At one point Kane loses grip on the collar and Bella bounds back towards the water spray. 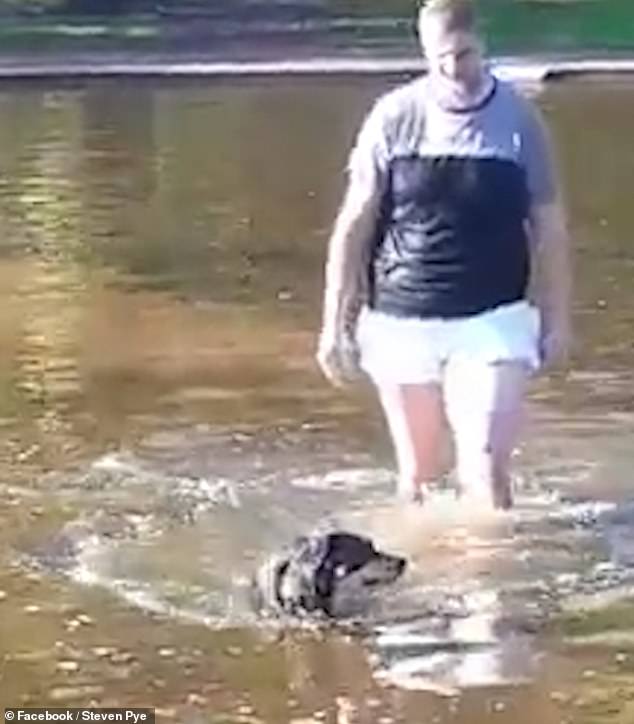 Kane tries again but only gets wet as the dog jumps around.

He eventually manages to grab the collar again and leads her out as she looks mournfully back.

‘As you can see, Bella is having the time of her life,’ Kane told The Dodo. ‘Whenever she sees water that she can play in, there’s no stopping her.’

It seems this isn’t the first time that Bella has entered this particular pond.

‘I had to do this once before, where the exact same thing happened,’ Baker said. ‘I had to go in after her, as she would not leave. We tried waiting it out to see what would happen, but she was enjoying herself way too much to just give up.’