Scarborough’s Bike & Boot was designed from the get-go as a dog-friendly hotel. (It’s also surfer friendly, and as you can tell from the name, it was intended to be cyclist and hiker-friendly, too.) Tell reservations you’ll be bringing a hound and the room will be equipped with a vetbed topped with dog treats as well as a chew-toy to take home.

Such doggy extras are now standard fare in any establishment aspiring to attract a canine clientele but, perhaps uniquely, this new hotel on the North Yorkshire coast also has a self-service grooming parlour in the basement. Your mutt’s mucky paws can be cleansed before they get anywhere near the boutique-style rooms and suites on the upper floors.

‘We’ve had more [room] damage from children than we have had from dogs,’ revealed hotel co-owner Simon Kershaw when I recently spent a dirty weekend at the Bike & Boot with my wife and our trainee guide dog puppy, Berry.

Scarborough’s Bike & Boot was designed from the get-go as a dog-friendly hotel – it was intended to be cyclist and hiker-friendly, too, as the name suggests 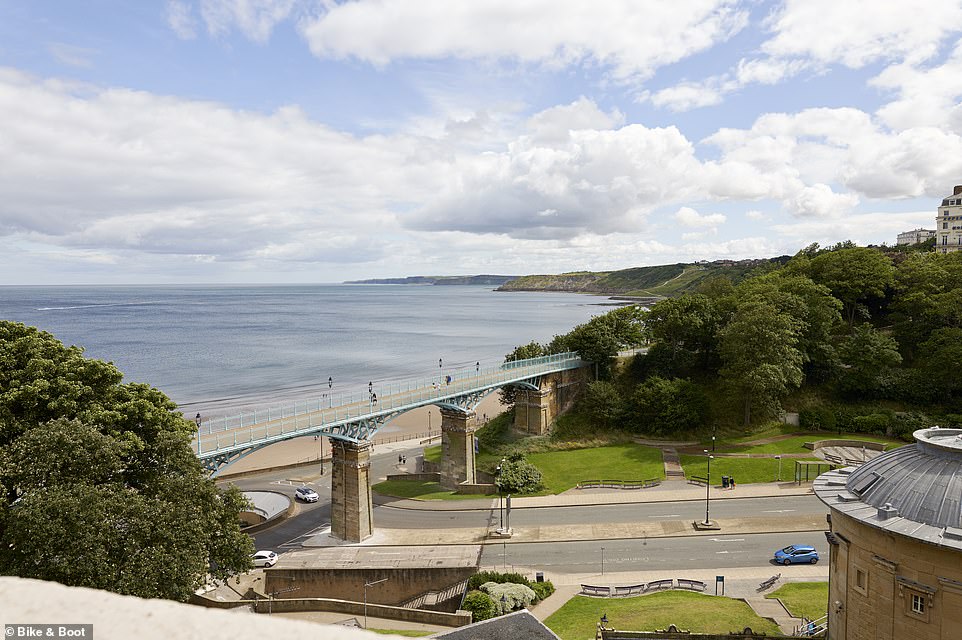 We had a blast on a three-mile clifftop walk to the all-year-round dog-friendly beach at Cayton Bay, and also trotted around the extensive ruins of Scarborough Castle. And, on our final day, while Jude did paperwork in our comfortable double – she’s a hospital doctor – I wandered with Berry through Scarborough’s historic old town, a short downhill stroll from the hotel.

Along with his business partner Simon Rhatigan, Kershaw activated a £2.8million loan to buy and fit out the run-down Mount Hotel on Cliff Bridge Terrace overlooking South Bay’s golden beach and the town’s iconic Spa Bridge. The pair acquired the 50-room hotel in 2019 and, over the space of 18 months, transformed the late-Georgian building into the hip and stylish Bike & Boot. More rooms were added by knocking through into an adjacent townhouse.

The hotel opened for a few short months in 2020, and since reopening after lockdown earlier this year, it has had a better-than-expected 95 per cent occupancy, said Kershaw, a former senior Whitbread executive. 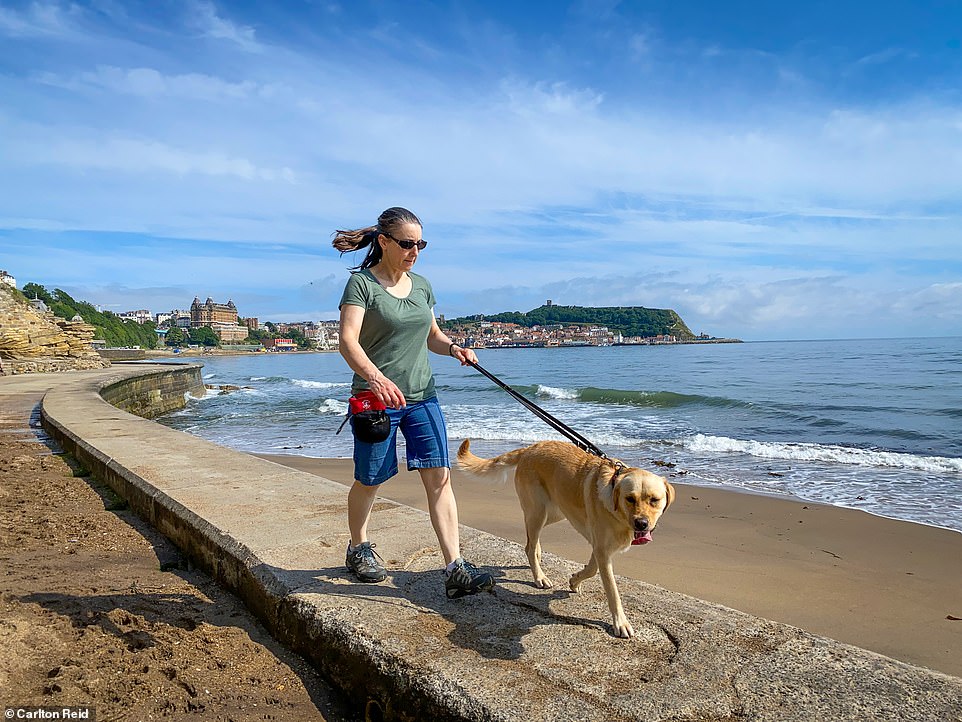 It’s a ruff life: Berry and Jude Reid on a sea wall on Scarborough’s South Bay 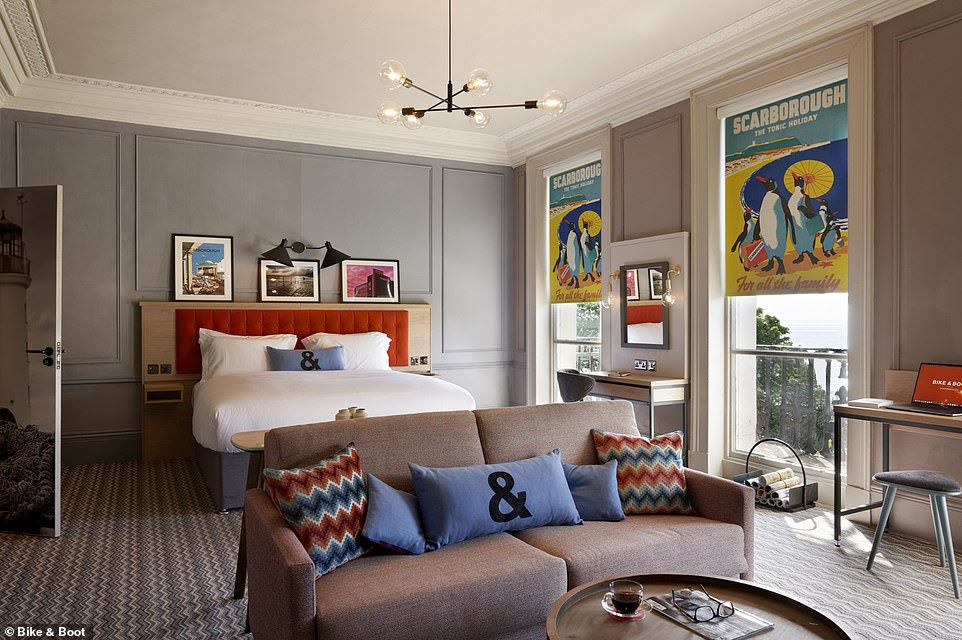 The Grade-II-listed building in which Bike & Boot is housed was originally a Georgian terrace, with servant quarters in the basement. Pictured is one of the 65 bedrooms

With upscale hostel vibes, Bike & Boot – that ampersand is part of the brand; it features on a bespoke door handle in the hotel’s funky lounge – has more in common with a Swiss ski-chalet than, say, a Whitbread-owned Premier Inn.

The Grade-II-listed building was originally a Georgian terrace, with servant quarters in the basement, and it predates the Grand Hotel opposite, which, with 365 rooms, was said to be the ‘largest and handsomest hotel in Europe’ when it opened in 1867.

Southward facing and towering over the geology-focussed Rotunda museum – a Scarborough gem and one of the world’s first purpose-built museums – 31 of the Bike & Boot’s 65 rooms and suites have sea views. 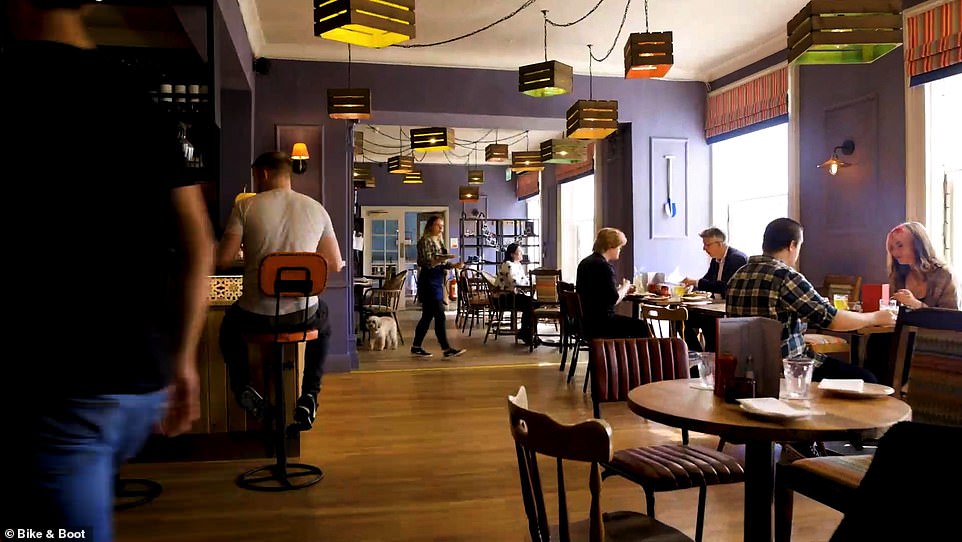 The hotel opened for a few short months in 2020, and since reopening after lockdown earlier this year, it has had a better-than-expected 95 per cent occupancy 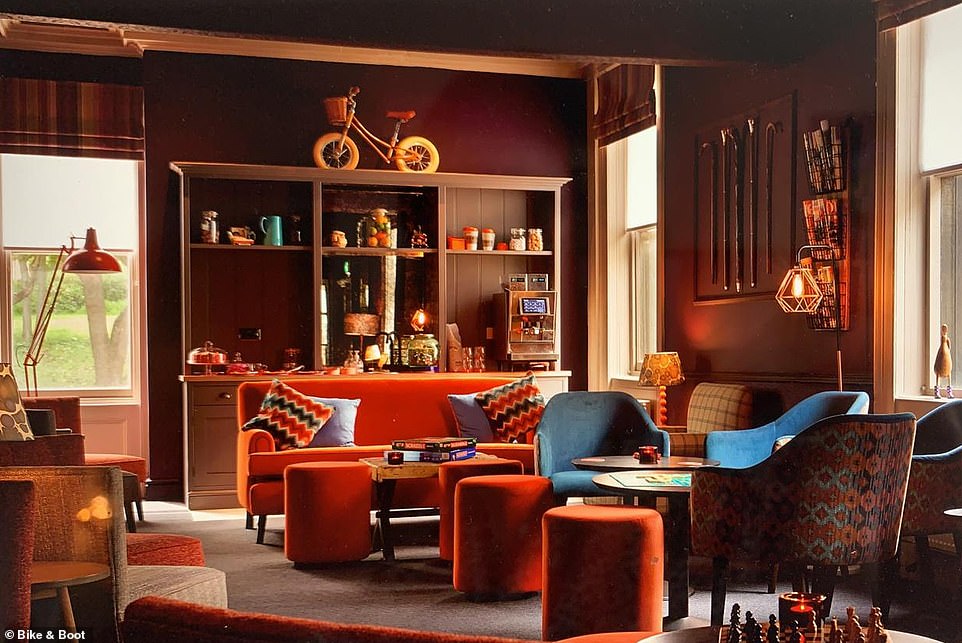 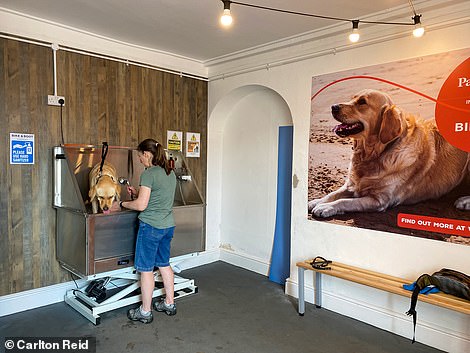 What used to be the hotel’s hairdressers has been converted into a dog grooming parlour, with an electrically adjustable washing trough (pictured)

And, appropriately, what used to be the hotel’s hairdressers – the Mount Beauty Salon with hair by Paul to be exact – has been converted into a dog grooming parlour.

No need for a Paul equivalent – this is do-it-yourself grooming with an electrically adjustable washing trough with shower-head water at just the right temperature and – should your dog require the full bouffant – a hot air blower.

There’s non-allergenic dog shampoo on tap and plenty of fluffy towels for those pooches, like ours, who’d rather be dried with rubdowns.

The basement, known as Wadobi (an abbreviation of walk-dog-bike), is kept toasty thanks to heat vented from the hotel’s fridges.

‘It was a joiner who came up with that idea,’ Kershaw told me proudly.

Using hot air that might be otherwise lost to the breeze is just one of the ways Bike & Boot reduces its carbon footprint. 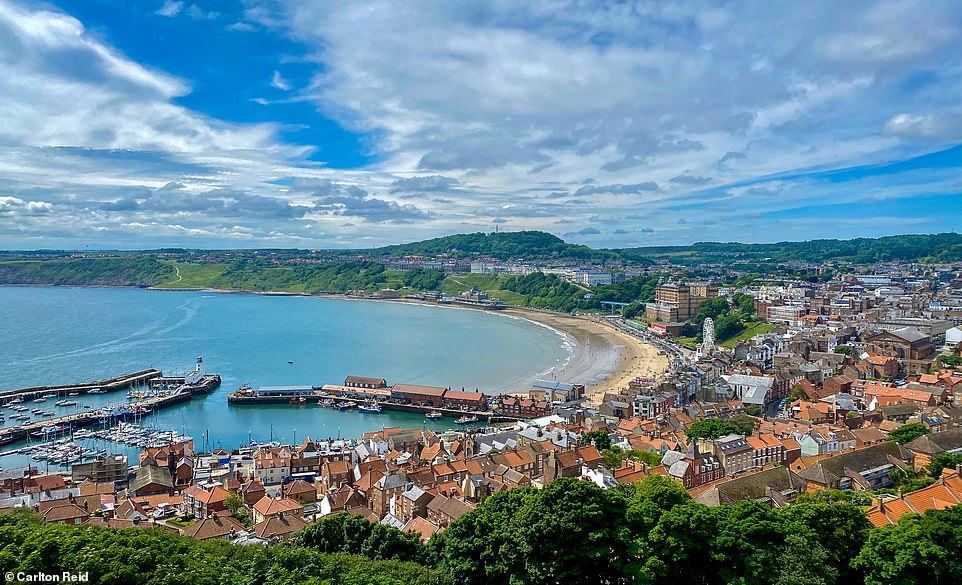 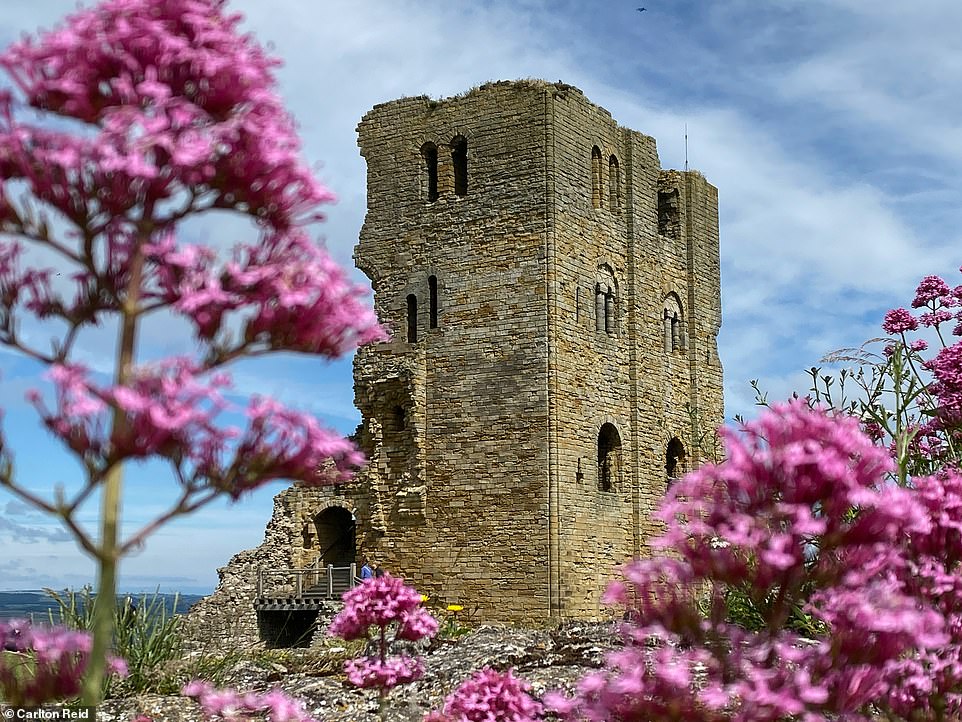 Scarborough Castle, built between 1157 and 1164. It has been a ruin since English Civil War sieges that took place from 1642 to June 1646. The castle is now overseen by English Heritage 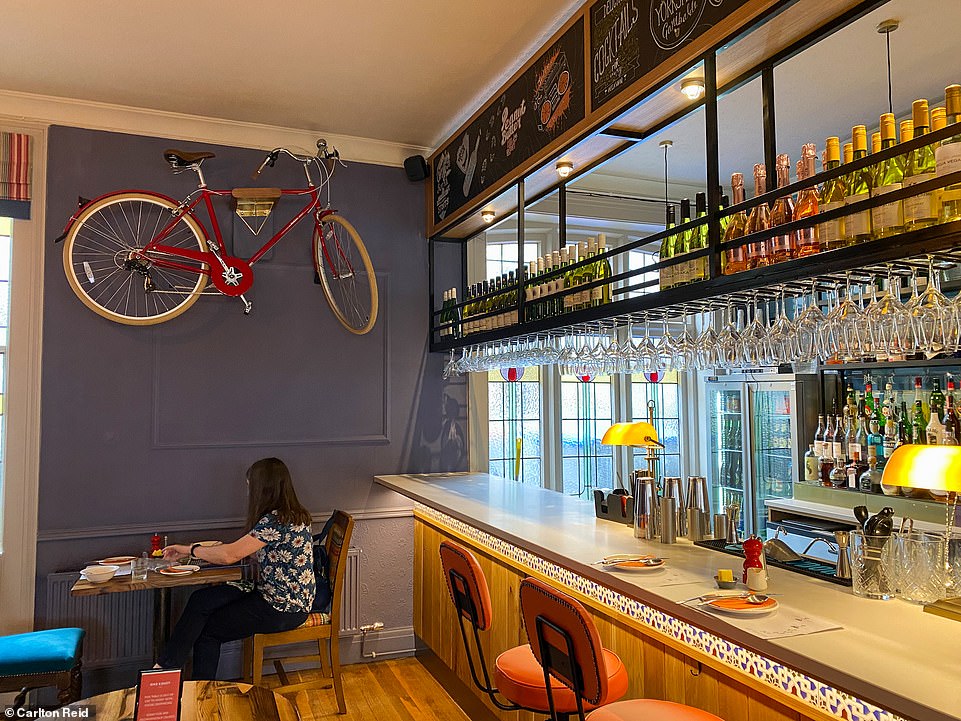 Much of the revamped interior features upcycled items, including reupholstered furniture, on-trend sculptures made from defunct bike parts and well-worn wellies, and a metal back-bar rescued from a Leeds pub 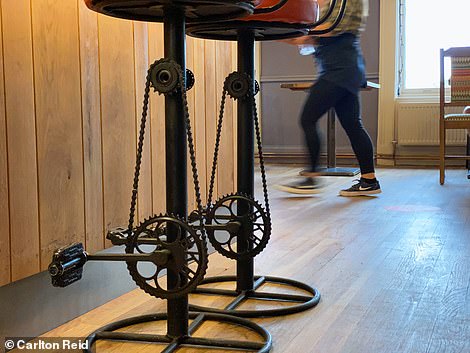 A strong clue that the hotel is cyclist friendly

Another – aside from boosting bicycling – is the hotel’s use of pre-loved materials. Much of the revamped interior features upcycled items, including reupholstered furniture, on-trend sculptures made from defunct bike parts and well-worn wellies, and a metal back-bar rescued from a Leeds pub.

The large, fridge-warmed basement also has a dedicated alcove for washing bicycles.

Thoughtfully, the hotel provides bike detergents, chain lubricants, and, for tinkerers, a tool station, too. There’s plenty of room in the CCTV-monitored space to store guest’s bikes: 128 is the record so far.

The dog grooming parlour is also well-used: while we were staying at the hotel, we saw (and sometimes heard) at least six other dogs.

‘A lot of my friends in the industry thought we were barking mad – if you pardon the pun – for installing professional dog parlour kit,’ said Kershaw. 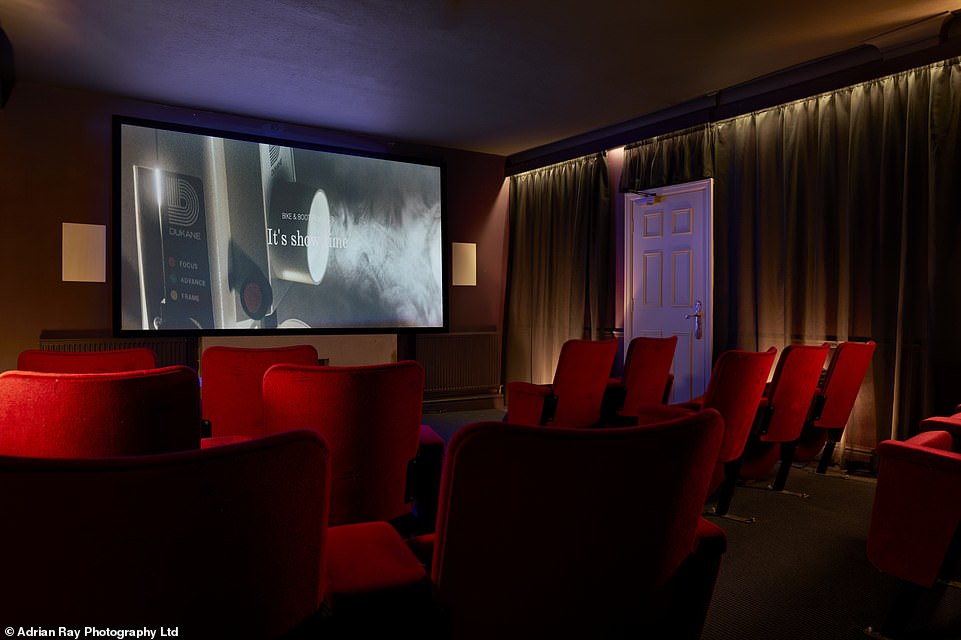 Mutts are allowed free rein of the hotel, including in the 16-seat basement cinema (pictured), which shows three films a day 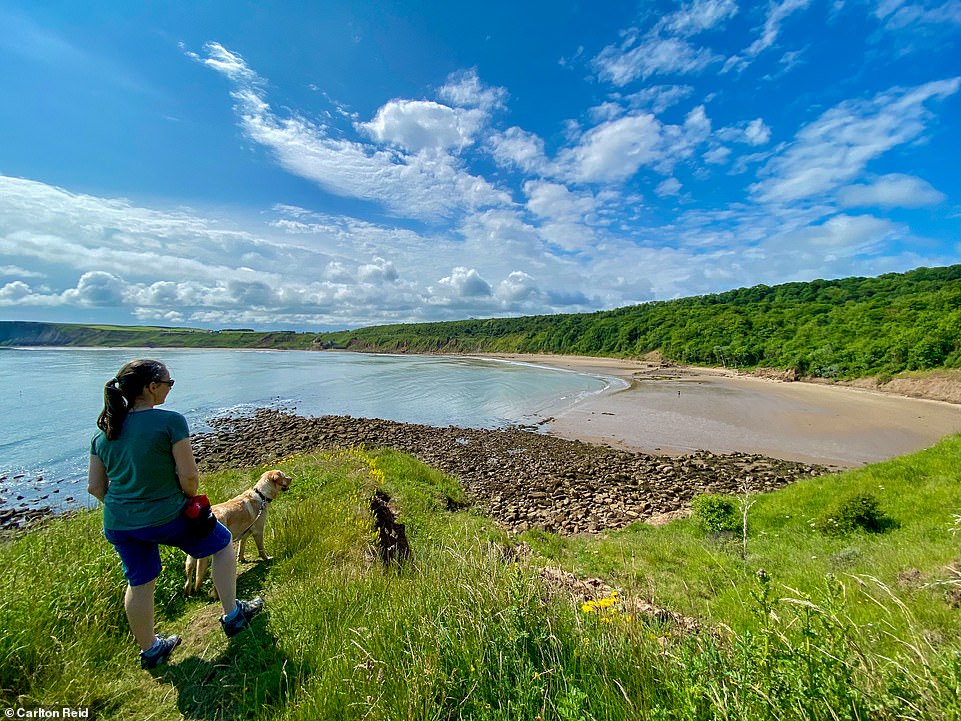 Berry and Jude looking down on Cayton Bay from Osgodby Point, near Scarborough 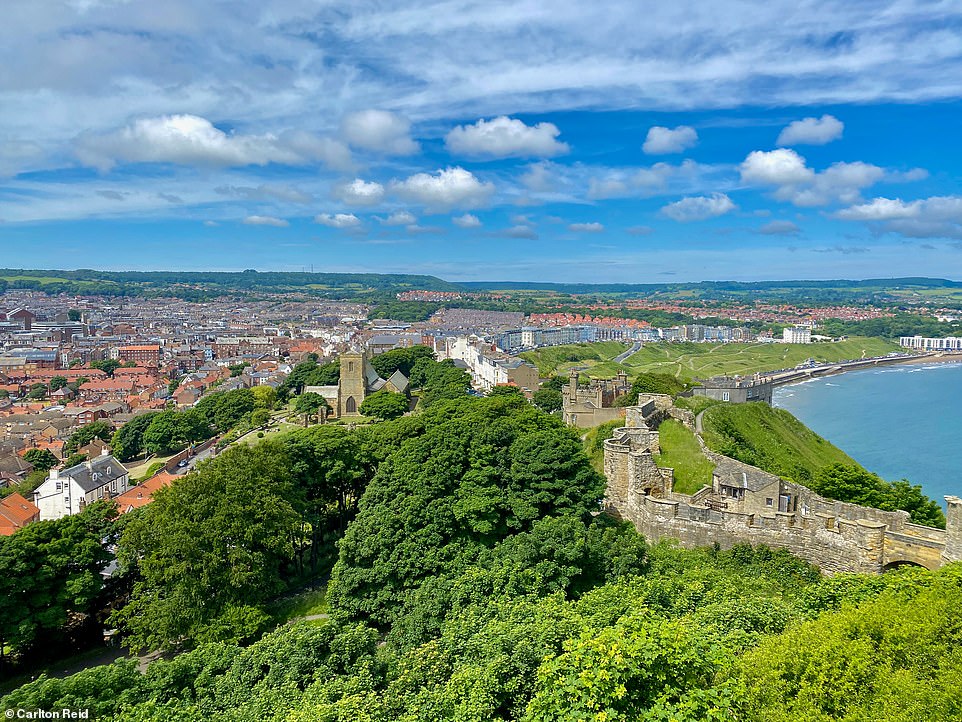 The view from Scarborough Castle over St Mary’s church, the castle walls and the town’s North Bay 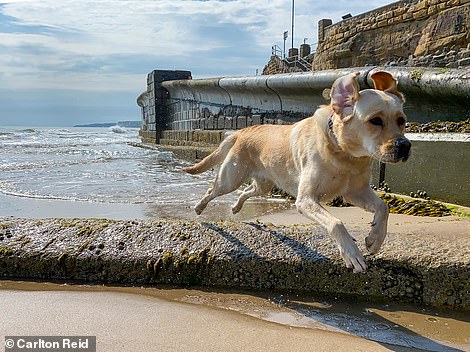 Berry getting wet and dirty in South Bay

‘They said you’ll have to have somebody on hand to groom the dogs, but guests instantly worked out how to use the professional tables. It becomes a social event in the early evening – people come in with their dogs after a strenuous day on the moors or the beach and wash them down, no fuss.’

And it’s not just dogs getting de-sanded.

‘Children get sticky and grimy on the beach, so instead of taking them in the bedrooms to shower, they often now get brought into the bike wash zone,’ said Kershaw with a chuckle.

‘The first time this happened, I heard shrieks of laughter from the basement and came down to see six kids lined up against the wall being hosed down by their mums.’

Bike & Boot is a lot of fun and, with the lockdown-induced return of the great British beach holiday, the hotel is likely to remain popular, especially with dogs.

Stays start at £65 per night, £185 for suites. Dogs are charged £15 per stay. Except for those rooms on a no-dog floor, mutts are allowed free rein of the hotel, including in the 16-seat basement cinema and the all-day bar and grill restaurant, Bareca (standing for bar-restaurant-cafe).

All rooms have a capsule coffee machine, and a mini-bar fridge with little bottles of real milk for the coffee, and pay-for goodies (including Brewdog beers, natch). Kershaw and Rhatigan are planning more Bike & Boot hotels – the next to open, in March next year, will be a new-build in the Peak District with a horse-friendly Bike & Boot opening in Sherwood Forest in 2023.