When the richest man on the planet says he wants to take over a social media company, you expect it to make a splash.

The audacious takeover bid – which saw Musk offer to buy all the company’s shares at a 20 per cent premium – made headlines.

Yet the market’s response was more muted. Twitter’s share price jumped around 5 per cent when the bid was announced, but have since traded sideways. It is still 37 per cent short of its all-time high in February 2021.

Indeed, just one day later, Twitter’s board said it planned to torpedo the bid — by stopping anyone from buying more than 15 per cent of shares without their say-so.

But what will all this drama mean for investors? Unlike other tech companies, Twitter isn’t a common pick for fund managers.

But if you hold a U.S. tracker fund (for example, an S&P 500 fund) in your pension or portfolio, you will have some exposure.

Company takeovers can be good news for stock-pickers — although they’re not without risk.

In recent years, the relatively cheap valuations of UK shares have led to a surge in interest among American investors looking to snap up a bargain.

In order to persuade a company’s board to sell up, bidders will usually offer to purchase shares at a premium, believing they can make a profit in the long run.

The most high-profile recent example was last year’s takeover of Morrisons supermarket, which saw shareholders bag a 50 per cent gain.

More recently, shares in fashion chain Ted Baker jumped 70 per cent on news of a potential buyer specialising in turning around struggling retailers. 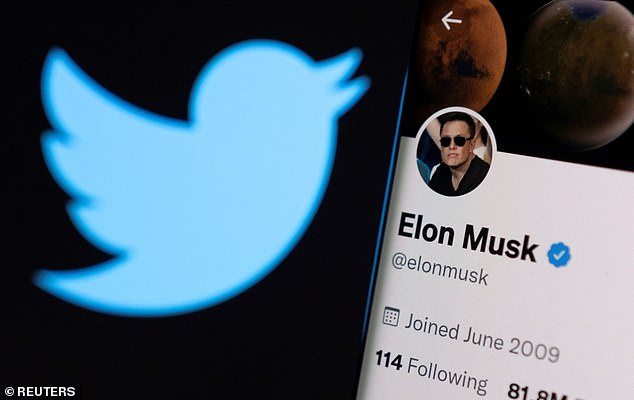 Offer: Tesla boss Musk offered to buy all Twitter’s shares at a 20%  premium – and is now engaged in a bitter war of words with the company’s board

Of course, there’s no guarantee that a takeover will happen – which makes share prices more volatile. Look at Ladbrokes owner Entain, which has fallen nearly 36 per cent since rejecting a takeover last year.

In the case of Twitter, the picture is even more complicated. Despite building one of America’s fastest-growing companies in Tesla, Musk has attracted flack for his ideas to revamp Twitter.

He has previously suggested that the platform would work better without corporate advertisers –despite the fact that they provide around 90 per cent of its revenue.

His suggestion that the company take a stronger line on free speech (by, for example, ending its ban on Donald Trump) won plaudits.

But would it make money? His idea that Twitter should incorporate volatile cryptocurrencies will have done little to woo cautious board members.

For one tech investor, Twitter’s investment case doesn’t add up — with or without Musk on board. ‘Twitter holds an unfortunate position as a relatively unloved tech stock, and not without reason,’ says Stephen Yiu, manager of the Blue Whale Growth Fund.

Gamble: Company takeovers can be good news for stock-pickers – although they’re not without risk

‘The platform does a lot of different things, but none as well as its competitors, which include Facebook, Google and Microsoft.’

Yiu says that the takeover bid also provides a reminder of the potential risk of so-called activist influencers — who buy up shares with the aim of influencing a company’s management — in the tech industry.

‘We would regard Twitter as more of a ‘‘wait and see’’ prospect than a buy.’

If UK investors side with Musk on what he calls Twitter’s ‘extraordinary potential’, they will at least have options.

The tech-focused Morgan Stanley U.S. Advantage fund has 4 per cent of its portfolio in Twitter, with other holdings including e-commerce platform Shopify and online game platform Roblox.

Unlike many other tech-oriented funds it shuns the more established options – like Apple and Amazon – making it a riskier pick.

Legg Mason ClearBridge’s fund has nearly 6 per cent of its money in Twitter. It also backs telecoms firm Comcast and health insurer UnitedHealth. In the same five-year timeframe, it would have turned £10,000 into £13,200.

With U.S. markets experiencing headwinds from inflation, both funds face some short-term risk.

For investors with a well-diversified portfolio, the chance to back high-growth companies may well make up for that. As always though, be sure not to put all your eggs in one basket — advice that Musk may be wise to follow.