Tonight’s episode of Shoplifters: At War With the Law, which airs on Channel 5 at 9pm, follows the security team of the Coventry’s West Orchards Shopping Centre as they work to track thieves operating in stores.

Cameras followed as the team caught a Romanian man who is part of an organised crime unit well practised in avoiding detection and stealing stolen goods.

The man is found with £1,000 in stolen goods on him, after he was spotted ‘browsing’ and bagging expensive perfumes at a department store.

Shoplifters: At War With the Law, airing at 9pm on Channel 5 tonight, follows the security team of the Coventry’s West Orchards Shopping Centre. In tonight’s episode, they arrest a man they suspect is part of a gang, and explain why it’s harder to catch gang members than ‘run-of-the-mill’ shoplifters

The security staff explained that gangs were trickier to deal with than other shoplifters, because they used tactics to remain discreet and were harder to pin down because they often worked in groups.

Team member Paul explained how gangs liked to operate around the shopping centre.

‘When you have shoplifting happening with organised crime units, there almost always out in teams,’ he said. ‘You’ll have one who’s watching from the other end of the store, on the phone, constantly.

‘You have another one that’s watching in store watching the staff, and another going around selecting all the items that are to be taken.

Team leader Mark was watching from the control room where he received a warning about a suspicious man in the department store’s beauty section. The man was ‘selecting’ a large amount of perfumes and putting them in his bag. 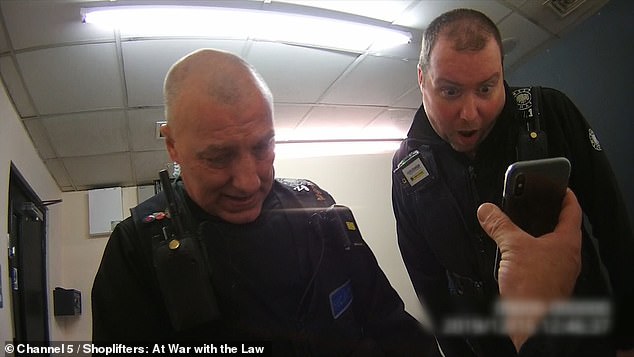 The team was shocked to find the man had nicked £1,000 worth of product from a department store’s shelves

The team acted fast and moved in to arrest the man moments after he stepped out of the store, holding the bag of stolen goods.

Upon interrogation, the security team started to suspect that the man was part of a gang.

The man’s registered address was located 200 miles away, which alerted the team to fact he might not be an ‘opportunistic’ thief, but part of an organised structure.

Mark said that if the shoplifter was caught having stolen more than £200, he would be handed to the police.

The team then found out that the suspected thief had managed to nick £1,000 worth of products during his spree. 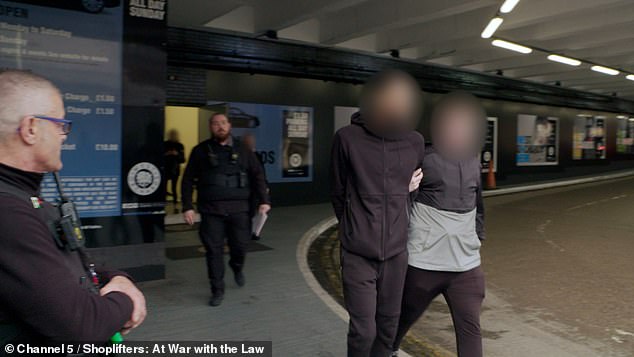 The thief was handed to the police, arrested, and escorted out of the premises. We learned he was made to carry out 200h of unpaid work

The haul confirmed the team’s suspicions that the man was part of some criminal endeavour, as shoplifters who act alone often nick no more than £100 to £200 at most.

‘When they are part of a gang, it does make it harder, because first of all, you don’t know how many more there are, you go in blind,’ said security agent Lee.

The shoplifter caught by the team was handed to the police, who confirmed he was part of a gang that had been causing them a lot of grief, worked with rough sleepers to get their hands on products, and had cost store around the region thousands of pounds in stolen goods.

The thief was arrested and escorted out of the mall, as security agents’ rejoiced ‘one off the streets.’

The man, who was not identified, was sentenced a tight curfew between 7am and 7pm and was made to carry 200 hours of unpaid work.

Shoplifters: At War with the Law airs tonight at 9pm on Channel 5.