A documentary is about to reveal the private journal of the judge who investigated the Titanic disaster and wrote in his notes mistakes he had found out such as ‘travelling at ‘excessive speed’ despite ice warnings’.

His family has decided to unveil his private diary with his thoughts behind the disaster after more than a century.

Lord Mersey’s notes suggest it was a combination of factors which led to the  tragedy and the loss of more than 1,500 lives.

He noted there were not enough lifeboats – they could only hold half of the 2240 passengers.

A crucial lifeboat drill was cancelled as Mersey commented ‘this unusual.’

He states the Titanic was travelling at full speed in an icy environment and he mentions, ‘excessive speed’ and  ‘no reduction of speed.’ 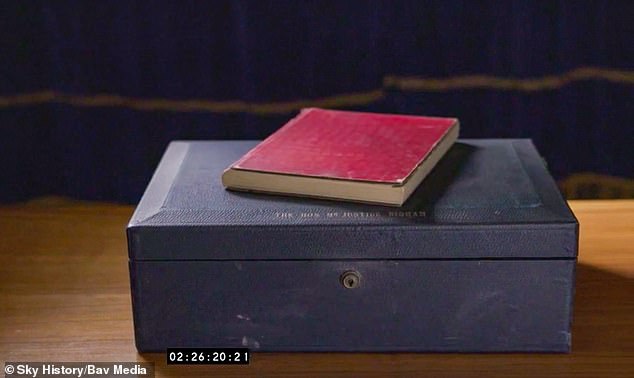 He also noted the Marconi operators had a series of ice warnings but they were not taken seriously.

He continues by writing that two vessels informed them of ‘icebergs, growlers and flows’ along with the drawing of diagrams, adding that the temperatures were falling, writing ‘this indicated ice.’

He says an ice warning came through at 2pm and was handed to Bruce Ismay, chair of the White Star, who put it in his pocket instead of making it public.

The iceberg was eventually spotted at 11.39pm by the crow’s nest lookout, who rang the alarm bell. 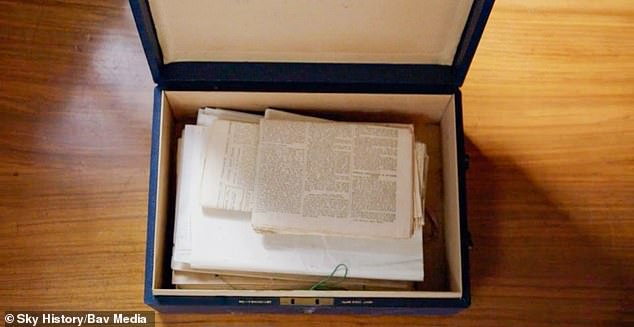 But as the boat was travelling at 26mph there was not enough time to turn it around.

The Titanic struck into the 60ft high iceberg shortly afterwards.

The watertight doors were closed to wall off the flooded areas, but Mersey noted that some of them were then manually opened by crew to move water hoses and pumps and then ‘left open.’ 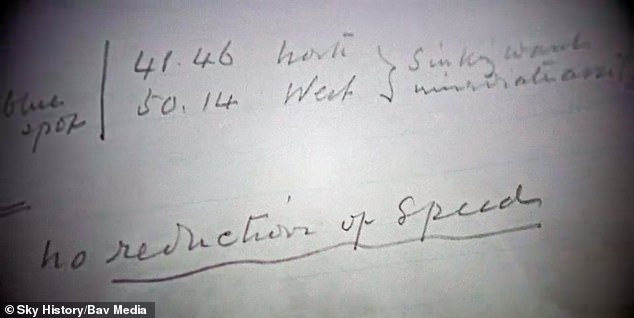 Among his notes he writes ‘ no reduction of speed, stating ‘the Titanic was travelling at full speed despite the ice warnings 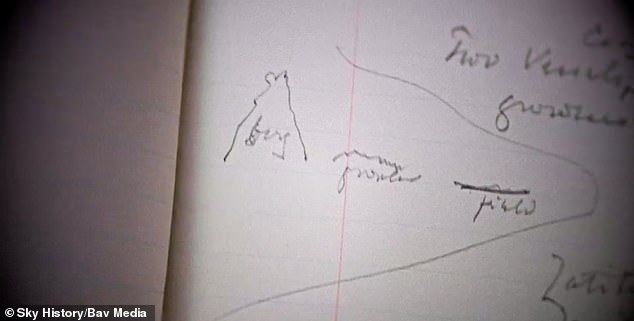 He has also included drawings of diagrams writing that two vessels warned of ‘icebergs, growlers and flows’ 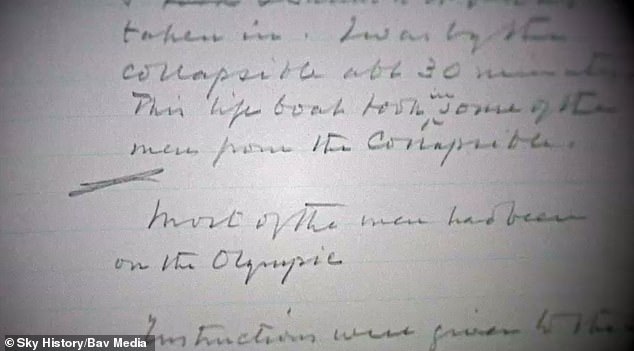 Mersey recorded the fact the Titanic stopped after it hit the iceberg, but then continued moving forward at half speed for another 20 miles, which increased the amount of water coming in.

About an hour after the collision the first lifeboat was lowered, with an order for the boats to be filled with women and children first but according to Mersey’s notes they ‘didn’t fill the lifeboats to capacity.’

Additionally he recorded that in one of the lifeboats 61 out of the 68 passengers were men, including chairman Bruce Ismay. 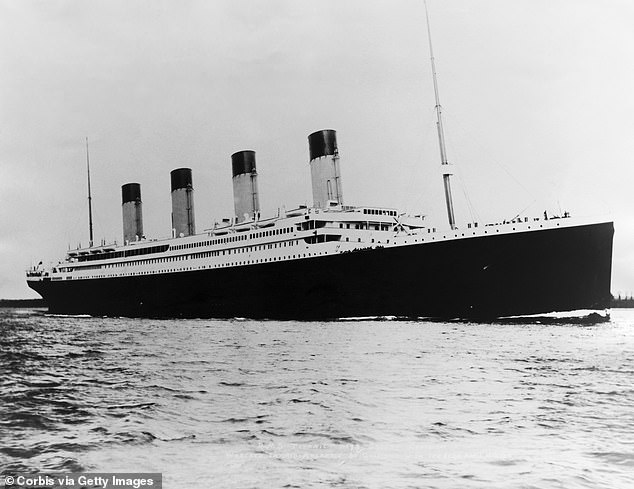 At 2.20am the bow of the boat submerged and it split in two and sank.

Out of the hundreds who fell into the water, only 40 were pulled out and survived.

Lastly he mentiones that only two lifeboats turned back to help.

Lord Mersey’s final report on July 30, 1912 concluded that the regulations on the number of lifeboats were out of date and inadequate, Captain Smith had ignored the ice warnings, the lifeboats had not been properly filled. 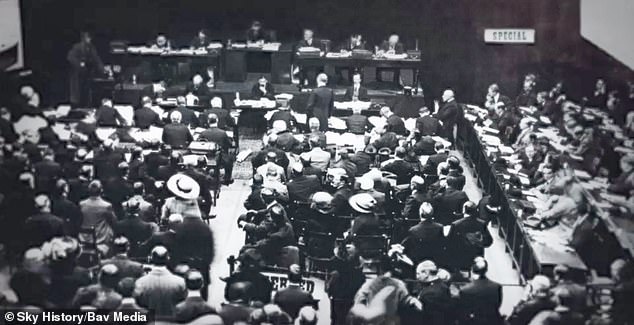 For decades historians have sought to unseal his personal documents, believing his sealed opinions and judgments were part of a conspiracy to hide the truth about the tragedy as there was fear his findings could lead to millions in damage claims and lawsuits, cause the collapse of the White Star Line and the loss of much of Britain’s lucrative shipping traffic.

After 108 years, his family have decided to reveal the secret diary, offering an insight into Lord Mersey’s real thoughts about the disaster.

He was appointed commissioner to inquire into the loss of the Titanic in 1912.

His leadership drew criticism that he was protecting the interests of the board of trade and the major shipping lines than revealing the underlying causes of the disaster.

The following year he presided over the International Convention for the Safety of Life at Sea.

He also headed the inquiries into the sinking ofthe  Empress of Ireland held in Canada in 1914 and the Falaba and RMS Lusitania in 1915.

The programme sees experts examining Mersey’s drawings and observations for the first time and reconstructing the Titanic’s journey in light of the new evidence.

Craig Sopin, a lawyer and collector of Titanic memorabilia from Philadelphia said: ‘It is amazing to see some of Lord Mersey’s journal after all this time.

‘Through the journal we get to see inside Lord Mersey’s mind and some people have said this is one of the best documentaries about the Titanic ever made as we get to see exactly what he was thinking.

‘He writes about the speed of the Titanic and that it was going too fast, and the fact there was no lifeboat drill. We can see all the things he questioned and found unusual and his reaction to everything.’

‘It was a combination of things that caused the disaster. There was the speed of the ship; also Lord Mersey took great issue with the fact Ismay put an ice warning in his pocket; and also the crew were ill prepared due to no lifeboat drill.

‘Also the fact that some of the watertight doors were opened and not closed again. There was a lot of negligence made and mistakes due to a culture of ignorance.’

He said the outcome would have been totally different if an inquiry had been held today.

He added: ‘We would have put the blame on everyone, Captain Smith, the White Star and there would also have been civil suits. It was only because of the culture and laws at the time that the White Star was able to continue operating.’ 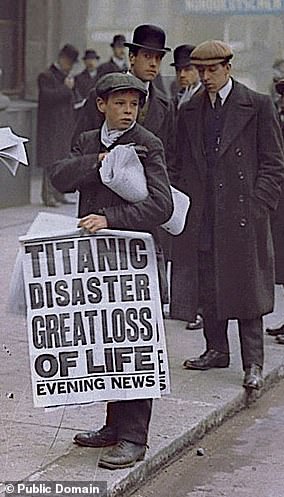 Ned Parfett, the ‘Titanic paperboy’, outside of the White Star Line offices in London

The Titanic sets sail from Southampton to New York, calling at Cherbourg and Cork en route.

Marconi Company radio officers on the Titanic received a total of six warnings of ice in the vicinity, not all of which were passed on to the crew.

Lookout Frederick Fleet, in the crow’s nest, spots an iceberg dead ahead of the ship. Turning to port, the vessel managed to avoid a direct collision, but suffered a ‘glancing blow’ instead.

The Titanic’s final lifeboat is launched. Ten minutes later, the liner’s angle in the water increased rapidly, ultimately reaching over 30 degrees, as water reached previously unflooded parts of the ship through deck hatches.

The Titanic finally disappeared beneath the waves, some two hours and forty minutes after striking the iceberg.