A doctor burned to death in his crashed Tesla because the vehicle’s electronic door handles didn’t pop out, meaning rescuers couldn’t save him from the flames, a lawsuit claims.

He survived the initial impact. And his family have now sued Elon Musk’s car company claiming the father-of-five’s death burning and smoke inhalation death could have been avoided were it not for the Tesla’s door handles.

The car firm’s vehicles have special door handles which sit flush to the car’s body. They retract into the vehicle while it is moving, but can pop out when it stops to let people get inside.

After the crash, the initial rescuers on the scene were confused by the car’s door handles, which hadn’t popped out, and were unable to gain entry, NBC6 reported.

First responders then arrived on the scene, and were also left stumped. Teslas are meant to have two back-up safety mechanisms.

The first sees the door handles pop out automatically in the event of an accident, unless it happens very abruptly.

A second option can allow first responders to break the car’s window, and manually pop the doors out using a special mechanism inside.

But neither happened, and Awan’s family insist it is because his 2016 model car was faulty.

According to the police report, Awan was speeding at the time of the crash, with his car going around 79mph.

He was also found to be over the drink-drive limit. Tesla has denied the claims made in the lawsuit, says the car was functioning perfectly, and alleges that Awan was to blame for his own death.

But his family are standing firm, and insisting he could have been saved were it not for the car’s door handles, which they insist did not function properly. 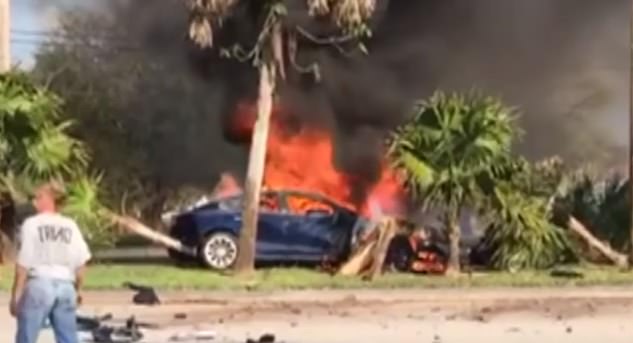 Firefighters were unable to reach the doctor because the retractable door hands didn’t pop out. Tesla claims it should have unless the power to the car was ‘abruptly’ cut off

After the crash, first responders claimed they were unable to open the door to the burning car because the couldn’t find a door handle.

The luxury, futuristic car company said the handles should have automatically popped out, unless power was ‘abruptly’ cut off from the vehicle, NBC South Florida reported. Tesla also said that there is ‘mechanical back-up in place that can only be accessed from the inside of the vehicle.’

First responders are reportedly trained to ‘break the window and open the vehicle from the inside,’ Tesla said.

‘They couldn’t find a door knob to try to go in that way and unfortunately were not able to extract the driver,’ a police spokesperson told NBC South Florida at the time. ‘They attempted to break the window in order to get the subject out, but were not successful. The flames were too strong, too big at that point.’ 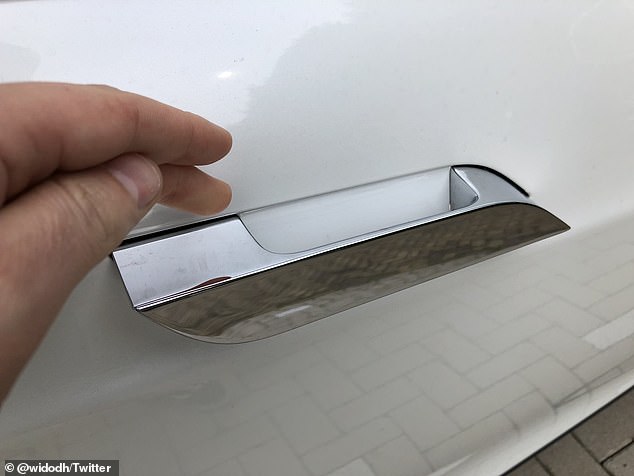 The door handles retract into the car while the vehicle is moving to make it more aerodynamic, but when Awan crashed, they didn’t retract out. There is reportedly a manual option inside the car. First responders said they tried to break the window to reach Awan, but here unable to because of the fire

The family is now saying that Awan ‘could have been saved’ if the Model S’ design wasn’t ‘defective.’

Beside the ‘failed’ door handles, the family is claiming the luxury car has an ‘unreasonably dangerous fire risk,’ the lawsuit said.

‘Listen, these futuristic cars have benefits, but they also have high, high risks, and yes, death is one of them,’ his wife Lilliana told NBC South Florida. ‘Forget the technicalities of this, that, whatever…The bottom line is that he was alive.

‘He was always smiling, cracking jokes with me,’ his son Saf – who tracked his father’s phone to the crash in 2019 – told NBC South Florida.

After his father didn’t return home from running errands, he looked up his location and saw he was in the middle of South Flamingo Road and thought it was an error.

He said: ‘I looked at it and it was kind of weird because the location was in the middle of South Flamingo Road. I just thought it was like an error, like a buffering error.’

But it wasn’t an error. Cell phone footage at the time shows the car surrounded by large, hot flames that took firefighters a long time to put out. Even after being towed away, the car reignited three times.

Tesla cars are known to burst into incontrollable fires after serious accidents and take 40 times more water to put out than a normal car. The cars reignite mostly because of its electric battery, which can put out extreme amounts of heat even after the fire is extinguished. 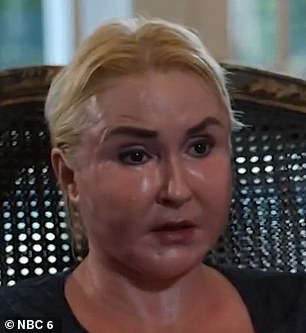 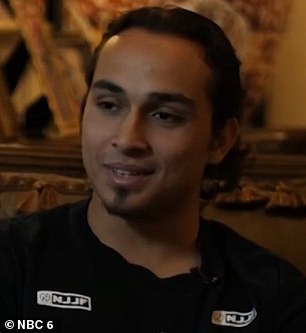 Awan’s wife Lilliana (left) and son Saf (right) are suing the company for his death, stating the Model S is ‘defective’ and the retractable door handles caused his death, as the medical examiner’s report said he died from inhaling toxic fumes and burns. Tesla, however, alleges he was the drunk or high as the toxicology report said his blood-alcohol level was above the legal limit

Know as the ‘backbone’ of the Awan family, his wife said it took her three years to get over the loss of her husband.

‘I said: “God, why him? Why him? Why my husband?” I thought I was living in a dream…that he would show up at the door. That he would come any day and joke around with the children.

‘He was a very gentle soul. He was very, very supportive.’

Her son agreed the lose was hard: ‘You feel down. You feel the worst you have ever been, you know, losing dad.’

The car company is also being investigated for autopilot failures, among other things.

One woman in Indiana was killed amid a series of smashes involving Teslas being driven in self-driving, autopilot mode.

The smashes are all linked to the presence of emergency vehicles at the time, with an ongoing federal investigation now looking into whether those vehicles’ emergency lights confused the Teslas’ self-driving sensors.

DailyMail.com has contacted Tesla for comment about the death crash lawsuit.