EXPRESS INFORMER > Health & Medicine > Do YOU know your a**e from your elbow? Apparently stumped 45% of us don’t…

Do YOU know your a**e from your elbow? See how you fare on the basic anatomy quiz which has apparently stumped 45% of us…

It’s an age-old adage designed to mock someone for their stupidity. But it turns almost half of us really ‘don’t know our a**e from our elbow’.

Our shocking lack of knowledge about basic anatomy — which we are taught as children — was uncovered by a poll of 2,000 adults.

If the survey results are to be believed, over a third weren’t completely confident they knew where their brain was.

SCROLL DOWN TO SEE THEIR ANSWERS, IF YOU DON’T KNOW WHERE YOUR HEART, BRAIN OR BLADDER IS…

Can you beat the organ location quiz that stumped so many adults? Scroll down to see the answers

Can you beat the average Briton when it comes to locating your organs?

In the Pall Mall Medical survey 2,000 Britons were asked if the could ‘confidently’ identify where an organ is located.

The results, showing what proportion of people successfully could, are below:

A similar proportion confessed to being unable to locate the heart or lungs.

Additionally, only 52 per cent of people surveyed — all of whom were British —stated that they definitely knew where their reproductive organs were.

And a shocking 8 per cent claimed they were unable to identify the location of any of their organs at all.

Of all the organs included in the questionnaire, the spleen proved the trickiest for respondents to locate. Only 20 per cent knew where it sat.

There was also a clear age-gap in the answers, with those in the 55-64 age-range the most likely to be able to locate their rectum, at 78 per cent.

The survey was conducted by OnePoll and commissioned by private healthcare provider Pall Mall Medical.

‘While these findings light-heartedly point out the bewilderment many Brits face when it comes to their bodies, hopefully it carries a serious message too about the importance of knowing our bodies,’ he said.

‘Perhaps people should go back to playing the classic board game “Operation”.’

He highlighted that while a bit of bewilderment about some of the more intricate or obscure organs was to be expected, a basic knowledge of anatomy can help patients communicate symptoms or concerns to their doctors.

‘Having good knowledge of our body parts and their functions is important, it enables us to be more in control of our health and understand when things might not be functioning properly,’ he added.

The survey was conducted online, and people’s answers were not checked, meaning those who expressed ‘confidence’ in their ability to locate certain organs may have in fact of been incorrect if tested.

AND HERE ARE THE ANSWERS… 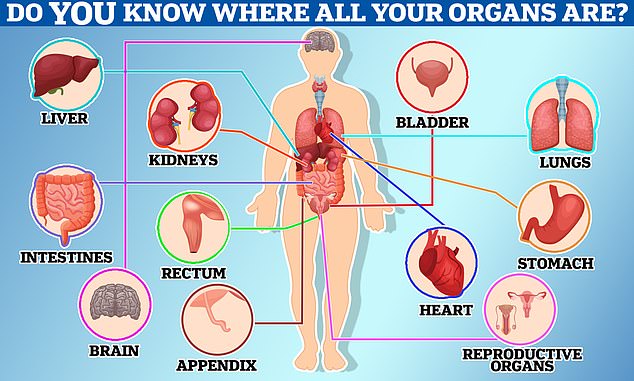 And here are the answers! Did you correctly identify where your rectum is? If so you beat 45 per cent of people surveyed