Today Money Mail is sending out an urgent message to readers: do NOT renew your home or car cover unless you have seen your new premium drop in price (lucky you) or increase by less than 10 per cent.

If your renewal price rise is greater than 10 per cent, contact the insurer and demand a discount. Some will offer one, although it’s pot luck.

If the answer to your challenge is a big fat ‘no’, please shop around.

Price hikes: Insurance premium increases are being foisted on tens of thousands of customers in excess of 20% – and in some cases as high as 70%

Invariably — not always — you will find a cheaper deal elsewhere, often without compromising the quality of your cover. It’s the way the insurance market works. Loyalty does not pay. Not in the past, not now.

Although new rules from the regulator are designed to protect existing policyholders from insurers intent on pushing up premiums disproportionately, Money Mail does not believe the regulations are effective.

Introduced by the City regulator at the start of last year, they require insurers to charge policyholders the same price as they would offer new customers buying identical cover. But many long-standing policyholders do not have the tools to test whether their premium is fair.

The result is that premium increases are being foisted on tens of thousands of customers in excess of 20 per cent — and in some cases as high as 70 per cent — and many are meekly accepting them. Most are elderly, some vulnerable.

The price hikes are not explained in the renewal notices customers receive, although they could be once new consumer duty rules kick in this summer. Nor are they a result of recent claims.

In some instances, customers who challenge the increase get a discount. Which begs the question: why isn’t the ‘discount’ offered straightaway?

In most cases, policyholders can get cheaper cover by shopping around. In other words, loyalty is still being punished by insurers.

Some insurers are guilty of such poor record-keeping that they cannot prove they are offering the same prices to existing customers and new ones.

That’s the damning conclusion of a report by the City regulator, the Financial Conduct Authority (FCA).

A year ago, the FCA introduced rules stating that insurers must offer a long-standing policyholder the same price as someone buying identical cover as a new customer.

But its research last month, seen by Money Mail, says some firms have not appointed senior enough staff to judge whether their businesses are complying.

The FCA told Money Mail it had ‘intervened and secured redress’ for a number of insurance customers. But it insisted ‘most firms’ were ‘complying with our pricing rules’.

Money Mail has discovered that early last month, the Financial Conduct Authority (FCA) quietly published a review into how insurers applied its new rules — and whether customers were still being discriminated against on the basis of the number of years they had held their policy. Strangely, the results were not released to the Press — as is usual.

The report pointed to poor record-keeping by insurers, with some companies unable to prove they are not price differentiating between new and renewing customers.

It also said some companies had yet to appoint someone senior enough to judge whether their businesses were complying.

The FCA can hold this person — as well as the insurer — to account if it deems the company guilty of breaking the rules.

Yesterday, the regulator also confirmed to Money Mail that in the past year, a small number of companies had accidentally price discriminated against loyal customers. In all cases, offending insurers had put matters right.

Yet, for all the talk that loyal customers are no longer being disadvantaged (see box), it’s not what Money Mail is seeing. From where we’re standing, it is difficult to get our heads around the increases being demanded by some insurers at renewal.

For example, Lynne Poore, an 84 year-old widow from Upminster in Essex, found out earlier this month that the home insurance she has with Liverpool Victoria on her two-bedroom bungalow would be increasing from £259 to £421, a 63 per cent price hike.

For the record, she has made no claims and she’s had the cover for many years. When she rang LV to contest the premium, she was told the price was non-negotiable.

‘I asked them to explain the increase,’ she says. ‘It offered none.’

Thankfully, Lynne, who lost her dear husband Ken in December 2021, was advised by friend Jean to speak to rival Axa.

She did, and it immediately offered her cover at £80 less than she had paid last year. She was delighted. But she’s still angry with LV.

‘If Aviva could offer such a competitive price for comparable cover,’ she says, ‘why couldn’t LV?’

Richard Woodward, from Wilnecote in Staffordshire is equally scathing. Richard and his wife Jacqueline had three cars insured under a multi-car policy with Admiral — a runaround Fiat 500, a Peugeot 5008 and his pride of joy, a Jaguar XK.

Last year, the cars were insured at a combined annual cost of £607. This year, Admiral wanted nearly £836, a 38 per cent increase. 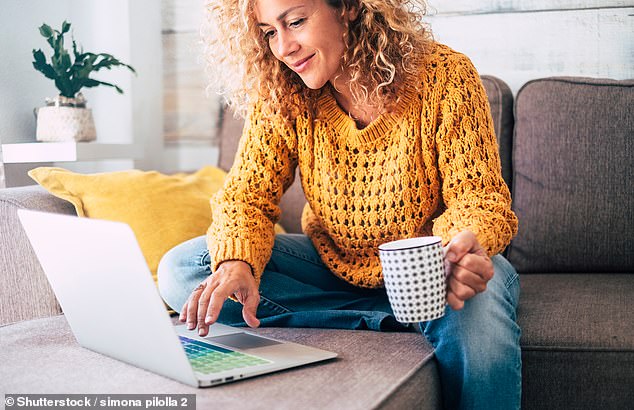 Shop around: Policyholders hit with large hikes can usually find cheaper cover elsewhere. In other words, loyalty still does not pay and is still being punished

Richard, who spent his early career as an engine driver in the fire service and is a member of IAM RoadSmart, can’t understand the price increase.

‘We’re another year older, another year more experienced, no claims and no convictions,’ he says, ‘but we’re being punished.’

After ringing Admiral and getting a small discount that reduced his premium to just below £800, Richard decided to shop around.

By insuring the three cars with separate companies, he has cut the combined premium to £643, a 6 per cent increase on last year.

‘Admiral has lost my business,’ says Richard. ‘What is the commercial sense of that?’ Yet it’s the vulnerable, the elderly, who he feels most for. Many accept the renewal price they are offered and pay up. ‘Unforgivable,’ he says.

Yesterday, Admiral, ESure and LV were among those at pains to tell Money Mail that they are abiding by the rules. But they refused to reveal the average increase policyholders are paying for 2023.

The FCA said: ‘Most firms are complying with our pricing rules, but we know they still need to make improvements to ensure the market is fair for all. Where we have found evidence of firms treating their customers poorly, we have intervened and secured redress, such as through compensation.’

A start. But there’s further to go. So shop around.