A couple who found themselves priced out of buying their dream home have revealed how they spent £25,000 transforming their ugly 1930s semi-detached house into a colourful three-bedroom Insta-worthy home.

Clara McGillian, 31, and Nicholas Felstead, 35, from Bridgend, Wales, struggled to find a new-build home which would fit their budget, and decided to buy a run-down property and renovate it instead.

The couple settled on a dark and damp semi-detached home which had been empty for four years, with Clara admitting to Wales Online they ‘totally underestimated how much work was involved.’

Describing the house as ‘a time warp’, Clara, who has gained 55k Instagram followers with the renovation, explained: ‘When we first walked in and saw the original front door with the stained glass, we just knew that we had to have it. We could see so much potential in the house. However, at this point, we didn’t even own a drill.’

Clara and Nicholas ended up tearing down walls in their home, adding a new roof and completely rewiring the property, with the brave couple spending £25,000 on the project. 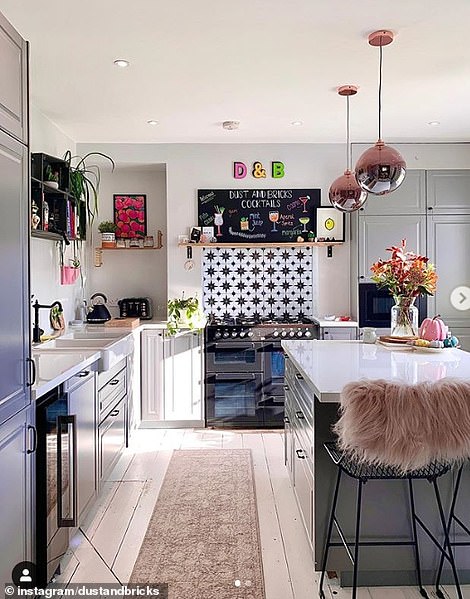 Clara McGillian, 31, and Nicholas Felstead, 35, from Bridgend, Wales, have revealed how they spent £25,000 transforming their ugly 1930s semi-detached house into a colourful three-bedroom Insta-worthy home (left, their kitchen before, and right, after) 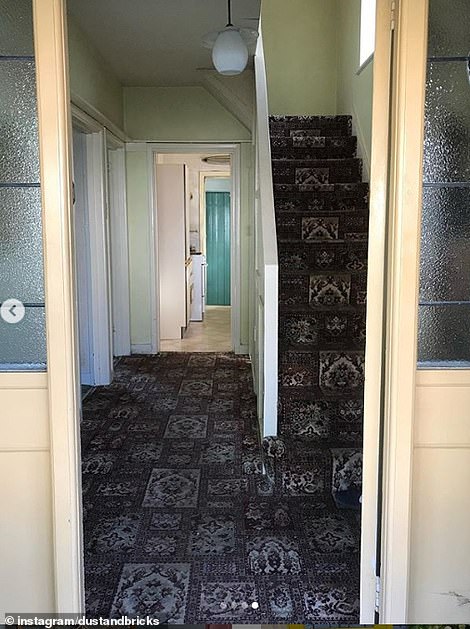 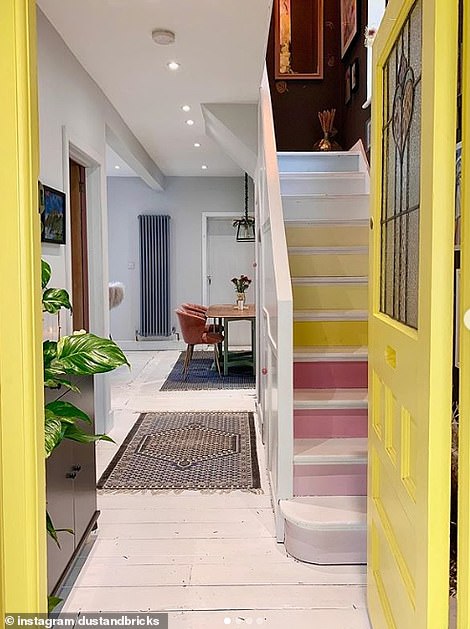 After finding themselves priced out of buying a new-build home, the couple bought a musty and damp property which had been empty for four years and set about renovating the space (left, before, and right, after)

After buying the property, the couple were under a strict deadline of six weeks before they would have to leave their rental home and move into the derelict house.

They quickly got to work, with Clara revealing that the previous owners were elderly, and that they hadn’t decorated since the 70s.

The property still had its original electrical unit from the 1930s and original plumbing, so the couple quickly invested in professionals to bring them both up to date.

But the pair were determined to minimise their costs as much as possible and decided to take on as much as the project as they could themselves. 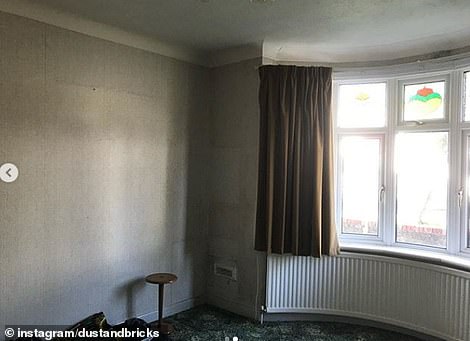 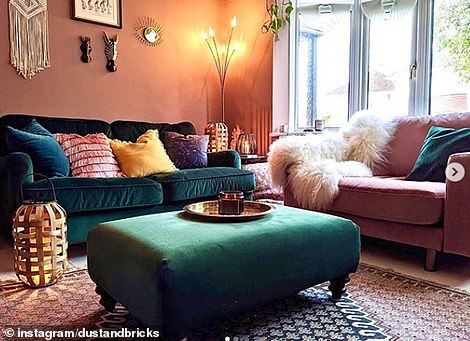 Clara revealed the couple were immediately drawn to the house but were complete DIY novices and ‘totally underestimated’ the amount of work the home needed (left, before, and right, after) 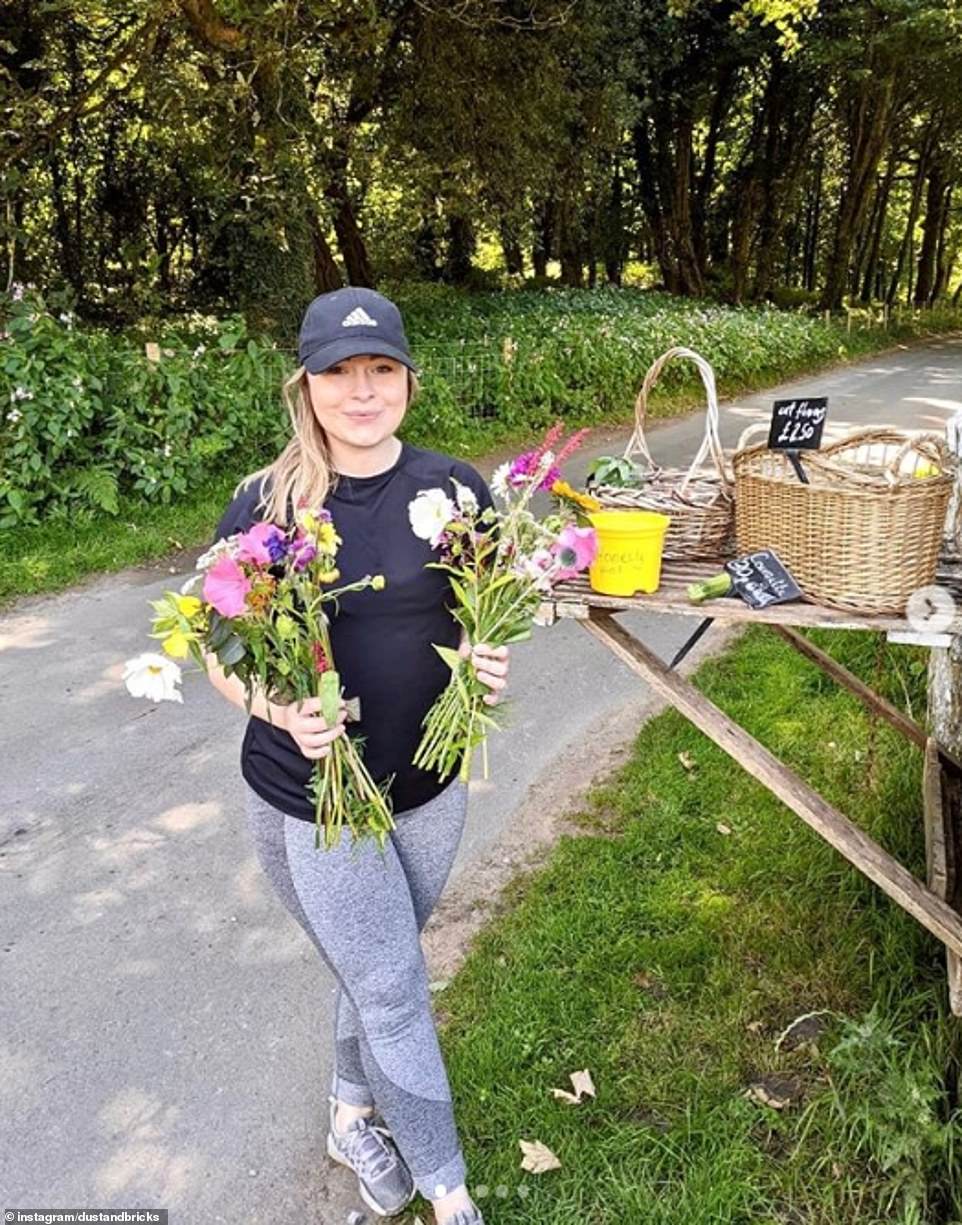 Clara has been documenting the incredible transformation on her Instagram account @DustandBricks, which has attracted more than 55,000 followers

They stripped wallpaper from each room and knocked down an interior wall between the kitchen and dining room to create a cool open plan living area.

Weeks later, the couple were forced to move into the house with no kitchen, only one working electric socket and the walls half-plastered.

The move motivated them to work even harder on the project, with Clara revealing they spent much of summer 2019 doing DIY jobs in order to save money. 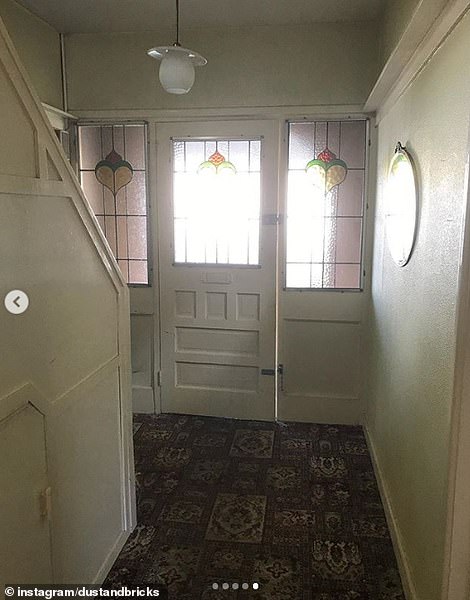 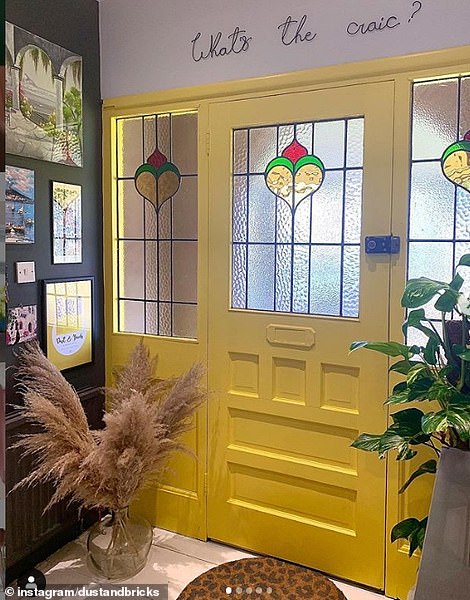 The teacher revealed the couple knew they had to have the home when they saw the stunning stained glass doorway, which they have drawn inspiration from when picking paint colours for the rest of their home

They even spent two weeks fitting their own kitchen to make the most of their budget and only booked a professional to fit their worktops.

The interior design then began with the couple determined to inject their home full of bright colour and playful wallpaper so it could reflect their personalities.

Clara admitted they were ‘so sick’ of magnolia walls and brown carpet after a decade of renting. 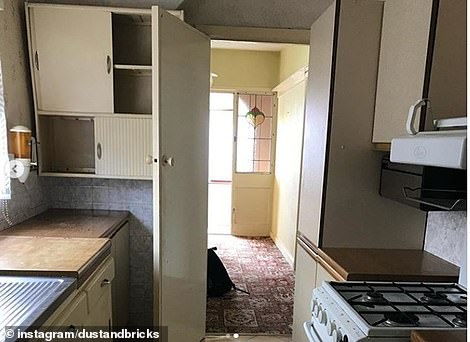 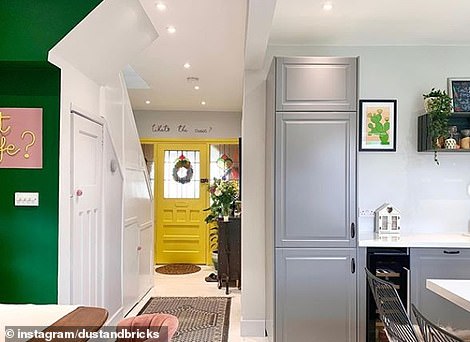 The couple spent £25,000 ripping down walls and knocking through walls to create the incredible open plan space, but are keen to take the transformation further by adding an extension 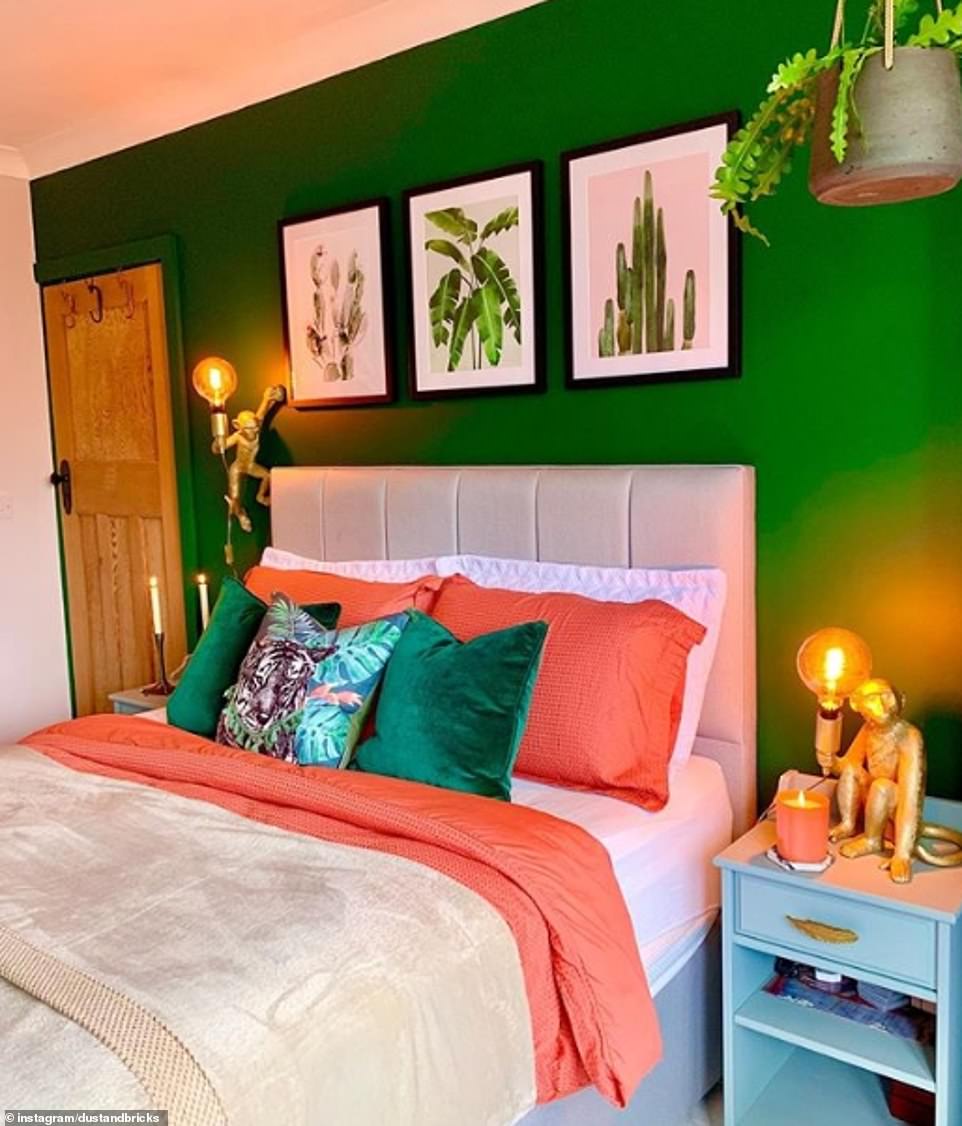 The couple were determined to stay within their budget on the project, with Clara revealing they spent just £700 on interior decorating (pictured, the master bedroom) 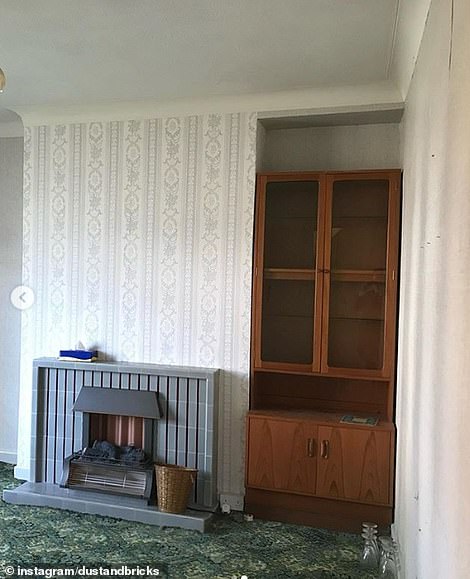 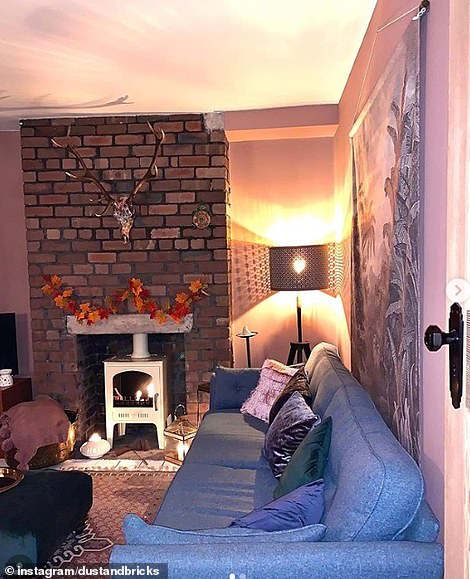 Clara, who said she was sick of boring interiors after spending a decade renting, decorated the home in bright colours and playful wallpaper  (left, before, and right, after)

Instead the couple looked to the stunning front door which had initially impressed them in the property, drawing the main colours for the interiors, pink, green and yellow, from the stained glass panel.

During lockdown they decided to tackle the bathroom, which they had felt was one of the most dated rooms in the house, and ended up giving it a budget makeover for just  £180.

The teacher estimates she has spent just £700 on the interior decor of her stunning home and colourful, cosy accessories. 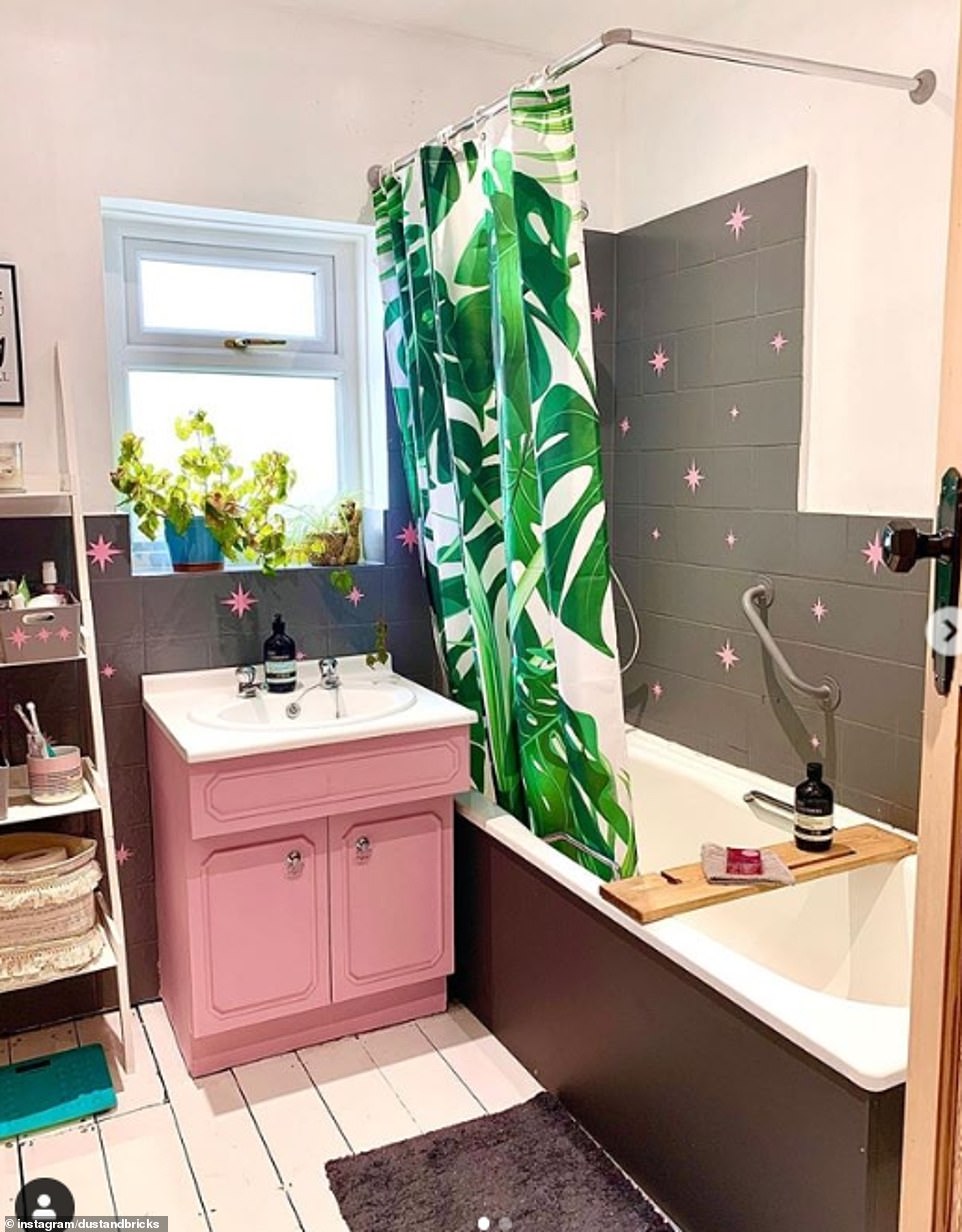 Most recently, the couple gave their bathroom a budget renovation during lockdown, spending just £180 on the transformation

To date the renovation project has taken 17 months and cost £25,000, including all the major work such as a new roof, rewiring, plumbing, heating and plastering.

And Clara admitted there is still more they would like to do to their home and will look to build an extension at the back of the house when they have the budget.

She added: ‘We learnt that you don’t have to spend a fortune to make a space look good. I think we live in a world where we want everything new but actually, if it is functional, then a mini makeover is a great temporary idea.’