A home testing kit that diagnoses aggressive prostate cancer is being trialled in the UK.

Researchers will post kits to 2,000 men in this country, Europe and Canada, with volunteers requested to send back two urine samples for laboratory analysis.

Men who could benefit from a simple urine test include those with low-risk prostate cancer being kept under surveillance by doctors.

Instead of facing stressful hospital visits every six to 12 months for an embarrassing rectal examination, painful biopsy, blood test or MRI scan, they could be seen less frequently – potentially only every two or three years.

In the meantime, the home test may alert doctors to their cancer becoming more aggressive, using red-flag genetic changes in the prostate which can be detected in the urine.

The test could also be valuable to men with suspected prostate cancer, who have a positive test for a protein in the blood called PSA, and those at genetic risk of the disease. In the future, it could be used to screen apparently healthy men for undiagnosed prostate cancer, similar to the bowel cancer test used by older people at home.

Dr Jeremy Clark, who has trialled the home test in men, said: ‘Feedback from early participants showed that the at-home collection was much preferred over sample collection in a hospital.

‘We hope (this could) revolutionise how those on ‘active surveillance’ are monitored for disease progression, with men only having to visit the clinic after a positive urine result.’

The test requires a urine sample taken first thing in the morning and another an hour later. It is being trialled in men aged between 55 and 80.

A study in 2019 found the urine test can track 38 genes which indicate if men have aggressive prostate cancer and need immediate treatment.

Researchers use a preservative to allow urine to be analysed up to a week after collection, so men can simply post their samples to the lab. 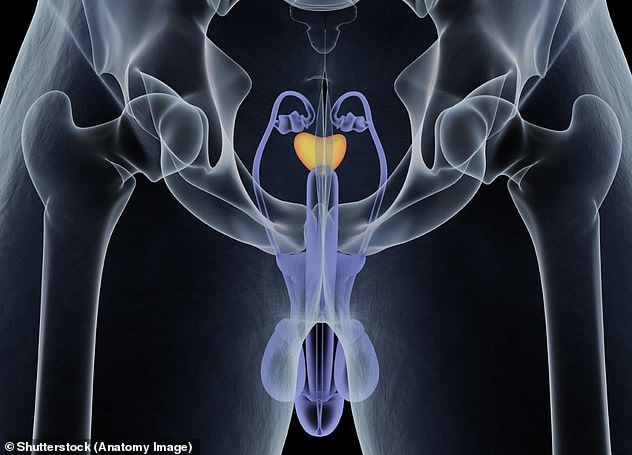 The home test may alert doctors to their cancer becoming more aggressive, using red-flag genetic changes in the prostate which can be detected in the urine (File image)

The urine test has been found to identify those with aggressive prostate cancer five years before it is detected by standard clinical tests.

More than 9,000 men die from prostate cancer every year in England, and the Daily Mail has campaigned for diagnosis to be urgently improved.

Robert Mills, consultant clinical director in urology at Norfolk and Norwich University Hospital, which is collaborating on the trials, said: ‘This simple, non-invasive urine test has the potential to significantly change how we diagnose and manage early prostate cancer.’

Paul Villanti, of prostate cancer charity Movember, which is helping to fund the research, said the test has ‘great potential to transform the way prostate cancer is managed’.