Two divers have experienced a ‘once in a lifetime’ moment after spotting a pair of sunfish while diving off the coast of a popular Sydney beach.

Justin Ewan, along with his friend Joshua Ku, were diving from a jetski off the coast of Long Reef beach in Sydney’s northern beaches suburb of Collaroy on Sunday when he spotted two ‘massive figures’ swimming towards him.

Mr Ewan soon realised the dark figures were a pair of ‘curious’ sunfish measuring about 1.8metres in diameter. 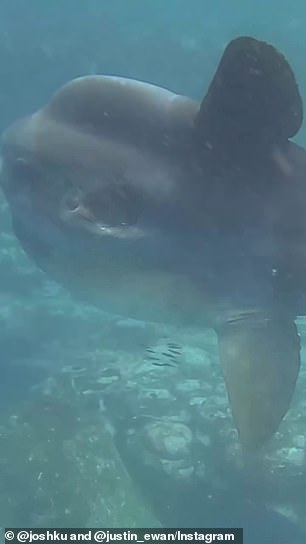 Two sunfish were spotted in waters off the coast of Long Reef beach, in Sydney’s northern beaches suburb of Collaroy. Incredible footage of the unique encounter was captured using a GoPro (pictured)

‘It was my turn to dive and I dove down to about 10 metres and looked straight ahead and noticed two massive figures coming towards me,’ Mr Ewan told 9News.

‘I couldn’t really believe it, until they got a lot closer to me, that they were huge sunfish, just a pair of them.

‘They actually swam up to me so I think they were a bit more curious than I was.’

Ewan explained that the sighting was extremely rare as sunfish are typically spotted in warm water far offshore.

The two divers captured the unique encounter on a GoPro and shared the incredible footage to Instagram.

‘It felt like a once in a lifetime opportunity,’ Mr Ewan said.

‘As soon as they came up, I just relaxed and dove down very slowly and calmly and ended up getting the chance to get close enough to film them and watch them swim away.

‘It was amazing. Josh hopped in after me and he got a chance as well. We were really grateful for that experience.’

Mr Ewan said he loved diving because he never knows what he will encounter next. 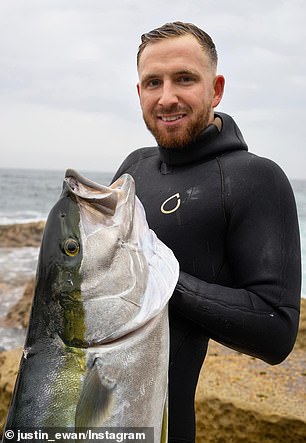 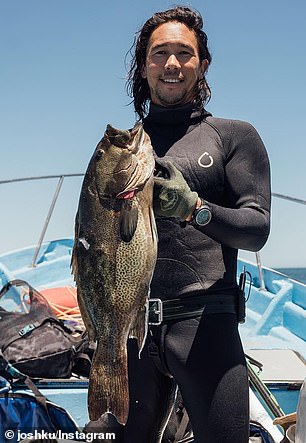 Justin Ewan explained that the sighting was extremely rare as sunfish are typically spotted in warm water far offshore and not in 10 to 20-metre deep water close to the coast. Ewan (left) and Joshua Ku (right) said they were grateful for the encounter and felt as though it was a ‘once in a lifetime’ opportunity 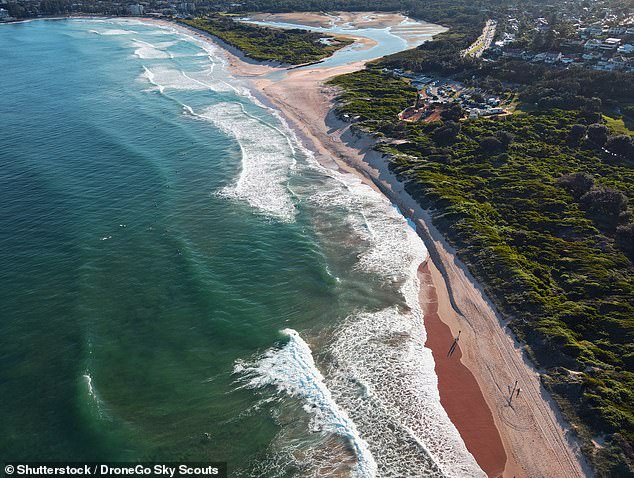 The sunfish, also called the Mola mola, is the world’s heaviest bony fish.

They can grow up to 3.1m long, 4.2m high and weigh up to 2,268kg, and are considered vulnerable in the wild making the find even more incredible.

They are found in tropical waters around the world and are often confused for sharks due to their fin.

Ocean Sunfish are on The International Union for Conservation of Nature ‘Red List’ of threatened species.

Their numbers are dwindling because they get caught in nets and can suffocate on plastic that finds its way into the sea.

They are also considered a delicacy in countries like Japan and Taiwan.

What are the Ocean Sunfish or ‘Mola mola’?

Ocean Sunfish, or Mola mola, are the heaviest of all the bony fish, with large specimens reaching 4.2metres vertically and 3.1metres horizontally and weighing nearly 2.268kg). Sharks and rays can be heavier, but they’re cartilaginous fish.

Sunfish develop their truncated, bullet-like shape because the back fin which they are born with simply never grows. Instead, it folds into itself as the enormous creature matures, creating a rounded rudder called a clavus.

Mola in Latin means ‘millstone’ and describes the ocean sunfish’s somewhat circular shape. They are a silvery color and have a rough skin texture.

Mola are found in temperate and tropical oceans around the world. They are frequently seen basking in the sun near the surface and are often mistaken for sharks when their huge dorsal fins emerge above the water.

Their teeth are fused into a beak-like structure, and they are unable to fully close their relatively small mouths.