Pregnant woman reveals her husband is ‘smitten’ with a new young colleague who has told him she’s not happy in her life – so, do YOU think she’s right to feel insecure?

A distraught expectant mother has revealed she has been left questioning her marriage after discovering her husband is smitten with another woman.

The anonymous British woman took to Mumsnet to explain her partner had ‘hit it off’ with a female co-worker and spent time messaging her from his personal phone.

She said the pair had ‘had a falling out’ after he ‘prioritised a professional decision’, and since the bust up, her husband had been ‘teary’ and really sad.’

Other Mumsnet users were baffled by her comments, with many suggesting her husband was ‘having an emotional affair’ and should be ‘reminding what he stands to lose.’

Posting her comments online, the woman said: ‘Dear husband is lovely, and kind and definitely adores me. I’m pregnant with a very wanted dear child.

‘He is very senior at work. Recently a younger woman has started. They hit it off.’

‘She texts his personal phone, mostly work, but sometimes not. She has confided in him her relationship worries and he has advised her that she doesn’t sound happy and life is too short (he told me this).’

She continued: ‘He talks about her at home quite a lot – not inappropriate things but definitely mentioning her. 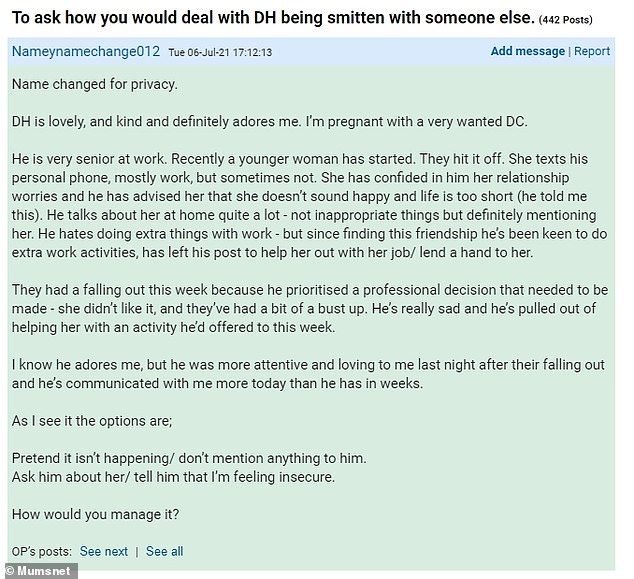 Posting on Mumsnet, she asked how other users would ‘deal’ with their husband being ‘smitten with someone else’

‘He hates doing extra things with work – but since finding this friendship he’s been keen to do extra work activities, has left his post to help her out with her job/ lend a hand to her.’

Meanwhile she continued: ‘They had a falling out this week because he prioritised a professional decision that needed to be made – she didn’t like it, and they’ve had a bit of a bust up.’

She said her husband had been ‘teary’ after their argument, adding: ‘He’s really sad and he’s pulled out of helping her with an activity he’d offered to this week.’

She begged for advice on ‘how to manage’ the problem, saying: ‘I know he adores me, but he was more attentive and loving to me last night after their falling out and he’s communicated with me more today than he has in weeks.’

Other users were stunned by her comments and accused her husband of ‘having an emotional affair’.

One wrote: ‘I would tell him that he is on the cusp of an emotional affair and needs to realise it needs to stop or he risks losing his wife and child.’ 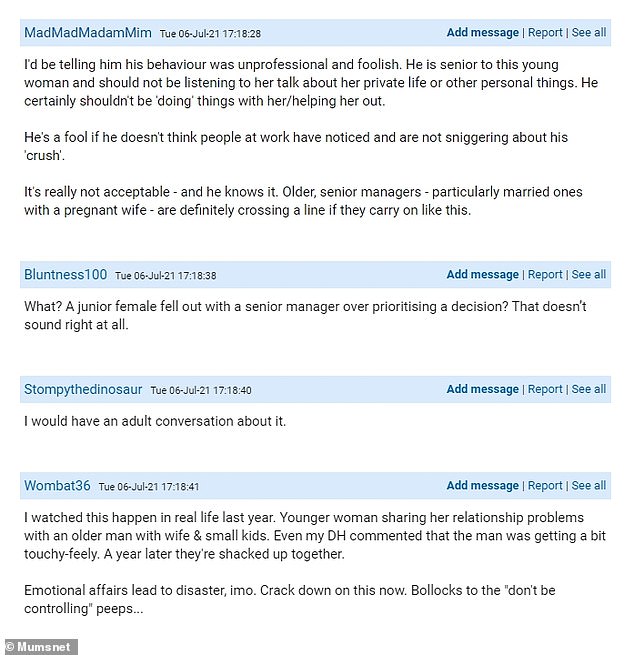 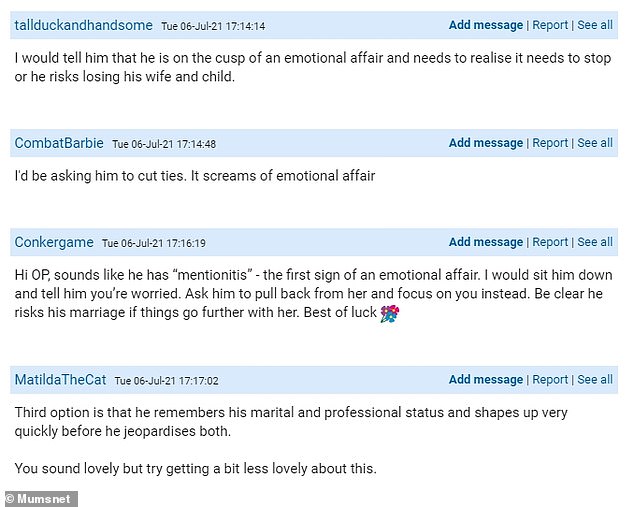 Other Mumsnet users were left stunned by the messages, with many suggesting he had been having ‘an emotional affair’ with his colleague

‘I’d be asking him to cut ties. It screams of emotional affair,’ another wrote.

A third said: ‘Eww. I’d be expecting him to stop any communication with her outside of work and working hours. This is disrespectful to you.

‘And he’s a silly sod risking his professional reputation and chancing accusations of favouritism. People at work will have noticed this and be laughing over it.’

Another added: ‘I’d be telling him his behaviour was unprofessional and foolish. He is senior to this young woman and should not be listening to her talk about her private life or other personal things. He certainly shouldn’t be ‘doing’ things with her/helping her out.’

‘He’s a fool if he doesn’t think people at work have noticed and are not sniggering about his ‘crush’.’

‘It’s really not acceptable – and he knows it. Older, senior managers – particularly married ones with a pregnant wife – are definitely crossing a line if they carry on like this.’