A groom has been slammed for his ‘disrespectful’ wedding display after he made the baffling choice to be carried down the aisle in a coffin – which was hoisted up to the altar by his future wife’s bridesmaids.

The grim groom’s bizarre entrance was captured on camera by a wedding guest, who videoed the moment that the unnamed man – believed to be from the US – was carted up the aisle at his outdoor ceremony in a black casket, with two bridesmaids leading the eerie procession, while being helped by several groomsmen.

The video, which was shared to TikTok, garnered a whopping 8.2 million views and although it didn’t reveal the reactions of the bride, it certainly struck an unhappy chord with online viewers, who were quick to blast the newlywed man’s actions. 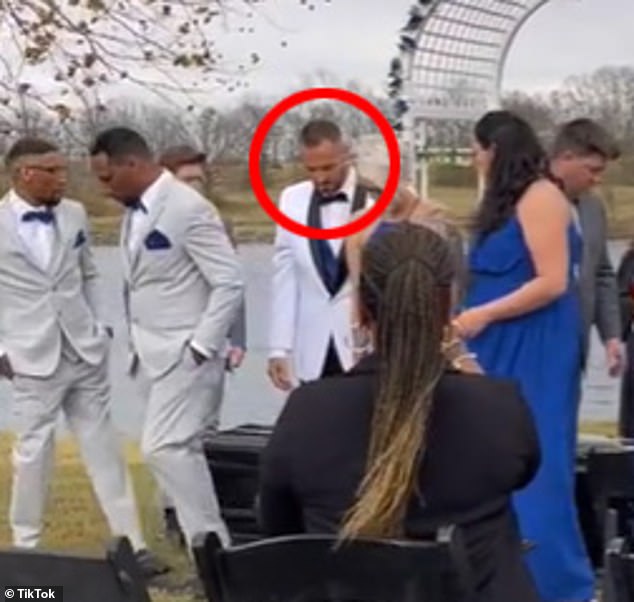 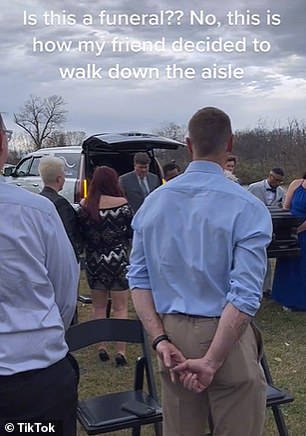 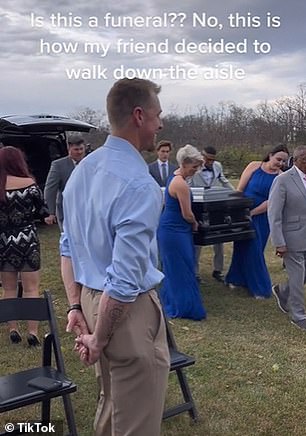 The grim groom was filmed by one of the wedding guests who captured the footage of the unnamed man being carried in a black coffin, with two bridesmaids leading the eerie march

The unnamed user who posted the video under the TikTok username @tobz88, shared it with the song Rest In Peace by Dorothy, while adding the caption: ‘Tell me you’re dramatic without telling me you’re dramatic.’

They then added: ‘Is this a funeral? No this is how my friend decided to walk down the aisle.’

In the video, the bridesmaids and several groomsmen are seen hauling a black coffin out of a large car – with the groom apparently stopping short of enlisting a real hearse for his ceremony.

Strangely, in contrast to the groom’s gothic entrance, the members of the bridal party who carted his coffin to the altar were wearing wedding-appropriate attire, with the bridesmaids dressed in pretty blue dresses, while the groomsmen donned dapper grey suits and bow ties.

After they took the coffin out of the vehicle, the bridal party then began carrying it down the aisle, while stunned wedding guests looked on in bewilderment. 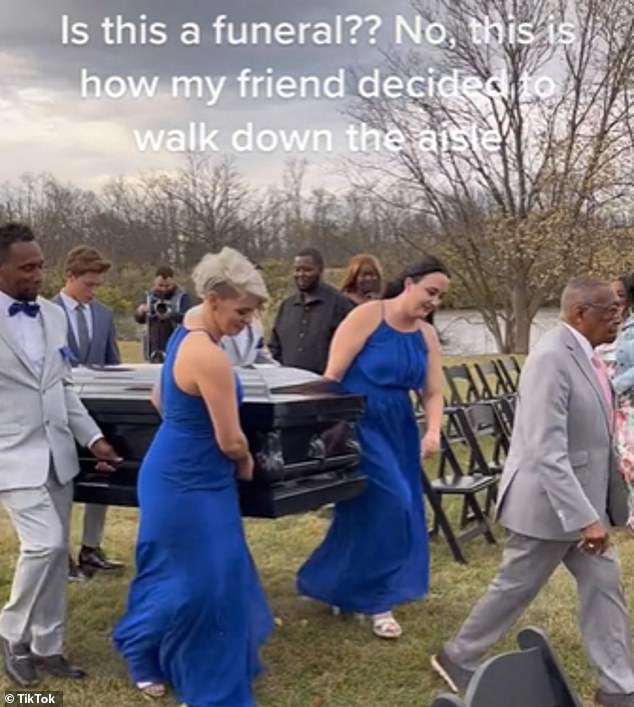 Although the video didn’t capture the bride or groom’s faces or reactions, it did show the bridesmaids carrying the groom in the coffin down the aisle 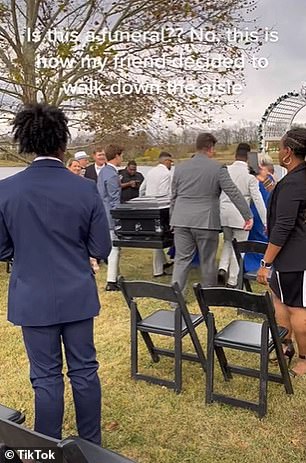 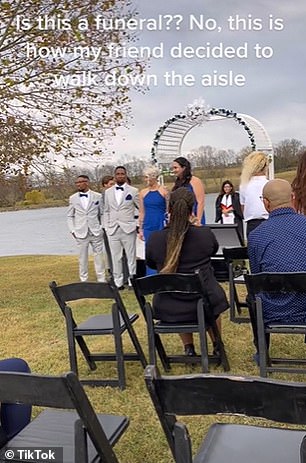 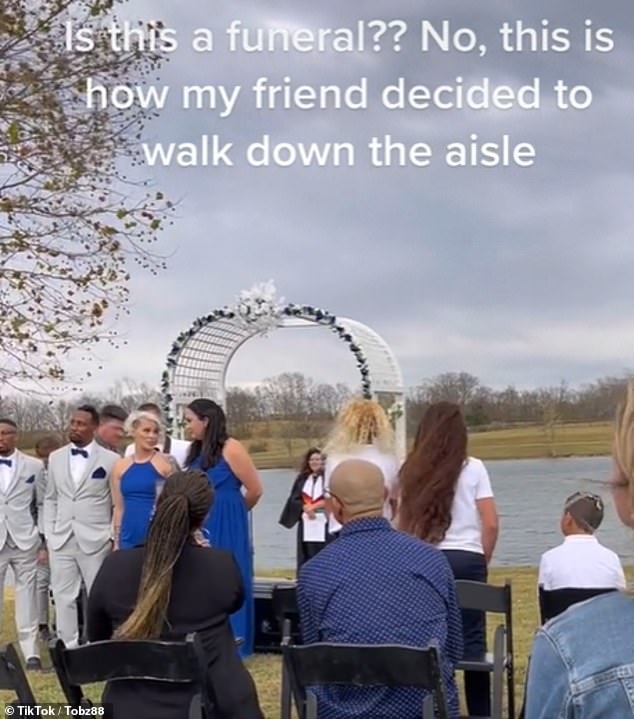 After crawling out of the coffin, the groom can be seen behind the wedding party and while his face was revealed, the bride’s reaction was left a mystery

The bridesmaids appeared to struggle slightly with the weight of the soon-to-be-newlywed, but made a valiant effort to carry the dark coffin up the grassy aisle at the outdoor event, before the group carrying the casket performed a pivot to lay it down in front of the altar.

They then lined up in front of the coffin, while a photographer snapped away as the groom popped open the lid and began to climb out of it.

Although the footage does not reveal many details about the groom, he is seen emerging from his casket in a white blazer and a black tie, while the officiant at the ceremony stared on in surprise.

The video does not show the bride – nor does it reveal whether or not the wedding ceremony actually went ahead in the wake of the groom’s bizarre entrance.

However, online critics were quick to offer up their own horrified reactions to the stunt, with several commenters insisting that they would have canceled the wedding immediately if their partner had made a similar kind of entrance.

One user said: ‘We would be divorced before we said I do.’

‘I have the deepest ick. Would have left immediately,’ wrote one other user.

Another user commented: ‘I would literally cancel the wedding.’

One person then chimed in: ‘The disrespect, the audacity.’

Many users also voiced bewilderment over the odd video and questioned how much the groom spent on the coffin, with one even noting coffins were usually ‘upwards of $4,000’.

Others wondered what the lovebirds would do with the coffin after the wedding.

And while many users wondered why the groom would even make such an entrance, one user did try to offer up an explanation by claiming the gesture was ‘cute’.

The user said: ‘I actually thought this was kinda cute. I interpret it as like, “I was dead before I met you'” or “my life didn’t truly start until I met you”.’