EXPRESS INFORMER > News & Politics > Disney’s theme parks are unlikely to open their gates again until 2021, according to analysts

Disney’s theme parks are unlikely to open their gates again until 2021, according to analysts

By Rory Butler For Mailonline

Disney’s world theme parks may not reopen until 2021 due to strict social distancing measures in force because of coronavirus, ultimately impacting profitability.

Some of Disney’s largest and best-known theme parks may have to wait for a coronavirus vaccine to be found before they can reopen, despite some sites advertising bookings as early as June.

Social distancing, travel restrictions and recession brought on by the global pandemic are factors that contribute to the business becoming ‘less profitable’, until such time as a vaccine is ‘widely available’.

That is a financial analysis of Disney by investment banking group UBS, in a report called, ‘The Eye of the Storm’.

The Walt Disney Company announced in April it had ceased paying 100,000 staff to save $500 million a month after a five-week shut down due to coronavirus, impacting more than 50 percent of its workforce.

Pictured: Walt Disney World Resort, Florida, one of the many sites shut down in mid-March 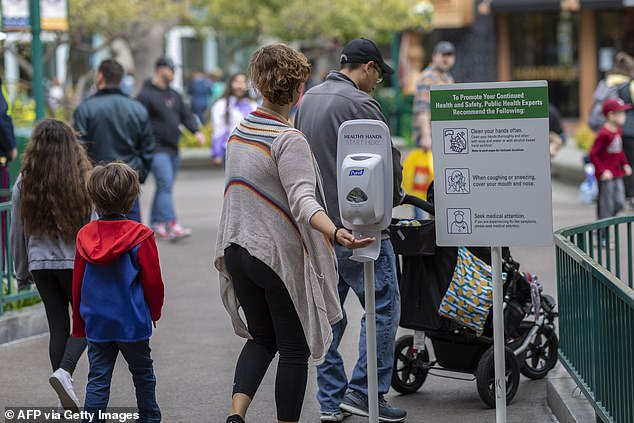 Disney began shutting down its theme parks in mid-March, with major sites like Disney World Florida, Disneyland California and Disneyland Paris all affected, according to a report in The Sun.

Despite online bookings for Disney World still being advertised as early as June 1, experts warn the theme park, and others, may not receive any business until 2021 because of the pandemic.

That timeline would seem to tie in with predictions by the scientific community that a coronavirus vaccine will take some 18 months to develop, and even then social distancing rules will remain in place until it is proved effective.

Indeed, experts advising the British Government on the matter say the only true ‘exit strategy’ is a vaccine or cure.

‘The economic recession plus the need for social distancing, new health precautions, the lack of travel and crowd aversion are likely to make this business [Disney] less profitable until there is a widely available vaccine,’ explained UBS analyst John Hodulik to The Sun.

Hodulik added Disney’s parks could ‘regain their recent operating cadence in less than 18 months, coinciding with the earliest expectations for a widely available vaccine for Covid-19’. 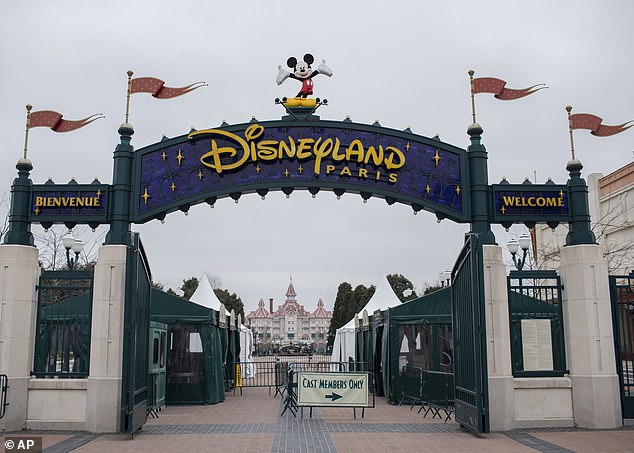 Pictured: The main gates of Disneyland Paris which was also shut down in the middle of March 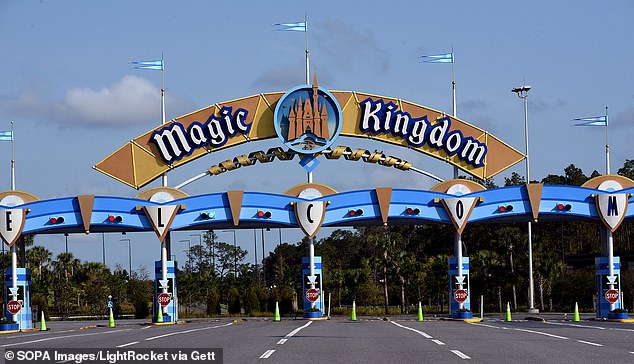 Pictured: The entrance to the Magic Kingdom at Disney World as seen on the first day it closed

Some experts, however, believe Disney’s June restart could be possible, though attendance will be down.

‘I think you have to assume international visitors are not going to be the first ones who come back to Disney World,’ said JP Morgan analyst Alexia Quadrani to financial news site Barrons.

She added that while international customers account for just 20 percent of footfall, other guests will likely be ‘financially strapped’, further impacting attendance.

In order to make guests feel safer, Disney is considering the use of temperature checks at its gates not dissimilar to the ones commonly used at airports around the world.

‘Just as we now do bag checks for everybody that go into our parks, it could be that at some point we add a component of that that takes people’s temperatures,’ said Disney boss Bob Iger.

Due to the high number of people going through the gates however, this could be difficult to implement.

Disney is also considering the use of virtual queues, which are already in place in certain areas of the parks.

Many of Disney’s now unpaid workforce join an estimated 22 million Americans out of work in the last four weeks.