A former soldier and his fiancée carried out a revenge petrol bomb attack on the home of her ex-boyfriend while his family were at home after boasting of being a ‘trained killer’.

Ashley McArthur, 21, and Kayleigh Dolan, 20, crept up to the lounge widow and hurled the Molotov cocktail onto a sofa as Stephen Shaw, from Middleton near Rochdale, was inside watching TV.

The victim, 20, suffered burns to his hands and legs in the attack and as he dashed onto his garden to douse the flames in a paddling pool he heard McArthur shout: ‘ha, ha – got you.’ 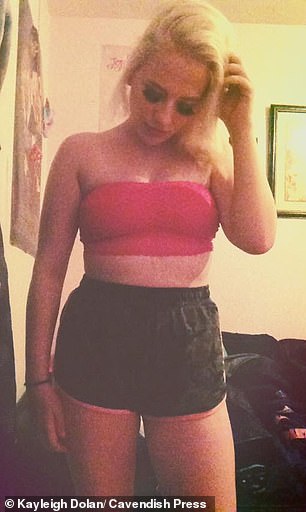 Ashley McArthur, 21, (left) and Kayleigh Dolan, 20, (right) crept up to the lounge widow and hurled the Molotov cocktail onto a sofa as Stephen Shaw, from Middleton near Rochdale, was inside watching TV

Mr Shaw’s brothers aged 11 and 16, mother and stepfather were at home at the time.

He had dumped Dolan after learning she was dating McArthur, who had been thrown out of the army for going absent without leave.

The incident created substantial ‘animosity’ between the both men and this developed into a feud.

Police investigating the blaze, which gutted the property, discovered the victim had previously been shot with a BB gun and was driven at with a car due to him previously dating bride-to-be Miss Dolan.

She herself made threatening phone calls to Mr Shaw saying: ‘Are you going to come out? – you’d better f*****g show up.’

In a statement, Mr Shaw said: ‘I am in ongoing fear and it is unfair that our family have had to leave our home of 16 years. I feel some guilt as if I am to blame for putting my family at risk.

‘Since that night I have been having panic attacks and am living an entirely different life to the one I led before. I am scared every day and fear noises, especially cars which make me jump and feel scared that this could happen all over again.’

At Minshull Street Crown Court, Manchester, McArthur, from Rochdale, was jailed for four years and ten months after he admitted arson, affray assault, having a bladed article and dangerous driving.

Dolan, from St Helens in Merseyside, who is now pregnant was jailed for three years while a third man, Carlo Blackey, also 20, of Dukinfield, was jailed for four and a half years. Both admitted arson and affray.

Prosecutor Miss Shirlie Duckworth said: ‘He turned up at Mr Shaw’s home and told his mother he would not touch her son in front of her but said: ”Do you know what you are dealing with I am a trained killer, I have just come out of the army”. She felt intimidated.

‘Meanwhile Miss Dolan asked the victim to meet her but when he said he was busy she told him: ‘you’d better f*****g show up.

She then phoned the victim and said ”are you going to come out for this ‘one on one or your windows are going to be smashed in”.

‘Mr McArthur was heard in the background saying ”meet us at the bottom of the street or you are going to be killed”.’

The feud escalated at 2am on June 10 last year after McArthur, Dolan and Blackley turned up in a Fiat car with her four year old nephew sat in the passenger seat and opened fire on Mr Shaw with a BB gun. 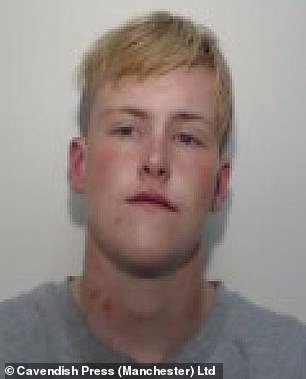 The pellet bounced harmlessly off the victim’s shoulder but McArthur then drove at Mr Shaw, his mother and stepfather forcing them to jump for their lives.

Miss Duckworth added: ‘At around 9pm on 10 June 2020 the victim was at home sitting on the sofa of his living room. His mother her partner, and his two brothers aged 11 and 16, his girlfriend and a friend of hers were also there.

‘A petrol bomb was then thrown through the front window and it landed on the sofa where Mr Shaw was sitting and burnt his hands and legs. He screamed and felt pain and heard McArthur outside saying ‘haha, I got you.’

‘There was smoke coming from the sofa and the curtains were on fire. Mr Shaw ran out the back door and put his hands into a paddling pool hoping his pain, which was extreme at this point, would be eased. He was left in shock and in fear. Witnesses saw heard a loud bang and saw the flames.’

No one else was injured but police said the fire caused significant damage to the house. Officers later recovered a video in which McArthur and Dolan bragged about how to set fire to a house, getting petrol bombs and throwing Molotov cocktails.

Texts messages talked of her doing a ‘petty run’ whilst he replied ‘yeah, yeah, I will bomb their house with it.’

In a statement Mr Shaw’s mother Sarah McGowan said: ‘That night is a night me and my children will never forget. To hear my children screaming in fear for their lives is indescribable.

‘My son was in flames and I will never be able to get that image out of my head.’ 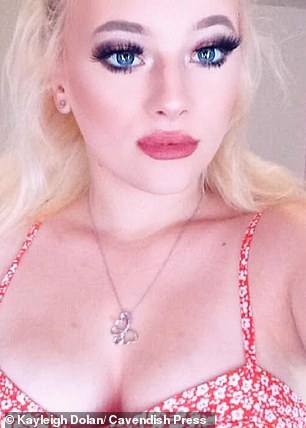 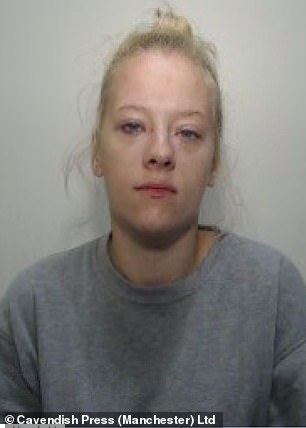 Mr Shaw had dumped Dolan (left – in a social media photo; and right – in a police mug shot) after learning she was dating McArthur, who had been thrown out of the army for going absent without leave

In mitigation for McArthur, defence lawyer Keith Jones said: ‘He spent some months at a military prison after going AWOL from the army and was later discharged.

‘This is a young man who is immature, easily led and has difficulties understanding the proportionate response to situations.

‘This was a complex entanglement of young people’s emotions. His comment about being a ”trained killer” was stupid and brash and was nothing more than bravado.’

For Dolan defence lawyer Katy Laverty said: ‘She is deeply ashamed of herself and extremely remorseful. She wishes for me to express her remorse to the victim, his family and all those who were in the house at that time.

‘She realises the distress she has caused and wishes she could take it back. She is now pregnant with her first child who is due to be born in June this year. She has an incentive to use this time as an opportunity to turn her life around and set an example for her child.

Sentencing Judge Sophie McKone said: ‘This was wanton violence over a pathetic disagreement which could have caused a family to lose their lives. Your actions were terrifying with your victim constantly living in fear and his mother having nightmares.

‘This was a revenge attack, which risked death or serious injury to those inside that property. You did not care who you hurt or who you could have killed.’