EXPRESS INFORMER > Travel > Discovering the perks of skiing in Norway

Three weeks before my skiing holiday, I didn’t know I was going on a skiing holiday. Or any holiday, for that matter. But then, something rare happened.

The stars aligned so that my three boys — aged 17 to 23 — were free at the same time. So last-minute break it was. And the request from them all was to go skiing.

When they were younger, it was always the Alps — a crazy dawn-to-dusk van drive from London to France, rented apartments, self-catering and the nightmare of co-ordinating gloves, goggles, ski passes and the rest for three excited little ones. Terrific fun, but not exactly relaxing.

This time, I thought we should make it easy for ourselves (well, for me, actually).

First stop was my friend Tom Avery, a polar explorer who runs an amazing collection of high-end chalets in Verbier. ‘You’ll have a job finding anywhere in the Alps at this short notice,’ advised Tom. ‘Try somewhere more unusual.’

That was when I hit upon Ski Solutions, a company that does what its name suggests. They came up with Norway.

What’s weird is that when Tom said ‘unusual’, I had been thinking Italy, Eastern Europe, North America — but not Scandinavia. It’s weird because Scandinavian farmers and hunters were on skis in the Middle Ages, and the Norwegians can lay claim to having invented modern skiing.

So it was that we found ourselves flying into Bergen and being driven a couple of hours to the resort of Myrkdalen, which is apparently one of only a couple of ski resorts in the country situated in an area of fjords.

The Norwegian coast is full of these narrow inlets created by glaciers, running inland from the sea for miles, flanked by steep sides, which is what gives it that distinctive crenelated look on maps.

Myrkdalen is pretty. And pretty spectacular. It normally gets some 4.5 metres of snow by February.

We weren’t quite so lucky, but we had 22 pistes at our disposal, and the set-up here is designed to minimise hassle.

We stayed in the Myrkdalen Hotel, which is like a giant alpine chalet, at the centre of the resort. Its back opens on to the lifts. 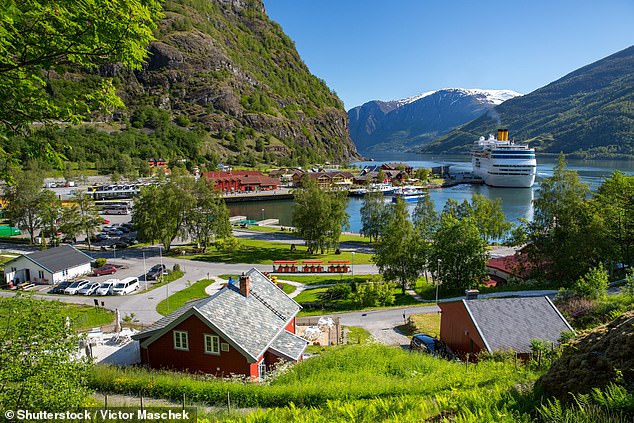 On his last evening, Peter travelled to the tiny port of Gudvangen, on the nearby Nærøyfjord, where he caught the ferry to Flåm (pictured above)

Compared with the Alps, in holiday season in particular, the runs were blissfully empty; everything was low-stress, from equipment hire to lift-queueing.

Social life was limited to the bar, après-ski bar and nightclub at the hotel, which is really the only game in town. The boys soon settled into a routine of skiing, eating and drinking.

The hotel has three restaurants, plus a café. We had fondue one night, a feast of cheese and meat that defeated us. The extensive ‘beer menu’ was a hit, too; and the hipster waiter who introduced us to the local brews from Voss, Flåm and Leikanger was, we decided, an archetypal Norwegian — friendly, with a quirkiness that spoke of his being a native of a strange land. It was this sense of ‘otherness’ that ultimately made this ski trip so memorable.

The landscape plays a big part. On our last evening, we travelled to the tiny port of Gudvangen, on the nearby Nærøyfjord, where we caught the ferry to Flåm, a two-hour trip on the water through towering cliffs on either side. As the light dimmed, we stood on deck in the freezing cold and took in the isolated villages on the shore and the sheer scale of the surrounding nature.

As Game Of Thrones fans, the boys loved it. So did their father.

Peter travelled to Bergen and Myrkdalen in Norway with Ski Solutions (skisolutions.com, 020 7471 7761), which offers two nights’ B&B in Bergen and five nights’ half-board in Myrkdalen from £1,225 pp, including flights and transfers.