Discount supermarket chain Aldi pledges to invest £1.3bn in Britain with the creation of 2,000 new jobs

German discount supermarket group Aldi has pledged to invest £1.3 billion in the UK over the next two years in a bid to accelerate its growth and market share.

The retailer plans to open another 100 new stores in Britain, expand its logistics infrastructure, including a new distribution centre in central England, and invest in technology.

It said it expected to create more than 2,000 new British jobs next year, adding to the 7,000 permanent roles created over the past two years.

German discount supermarket group Aldi has pledged to invest £1.3 billion in the uk over the next two years in a bid to accelerate its growth in market share

The supermarket, which celebrates its 30th anniversary in the UK this year, said its continued investment in Britain was ‘recognition for three decades of trust and loyalty’ shown by its growing base of loyal customers.

It added that it had spent an extra £1billion with UK companies last year taking its total to £8billion, as its entire core range of fresh meat, eggs, milk, butter and cream is sourced from British suppliers.

However Aldi’s market share edged lower during the Covid-19 pandemic, partly due to a lack of a significant online business.

It is Britain’s fifth-largest supermarket group, with 920 UK stores and an 8% market share. 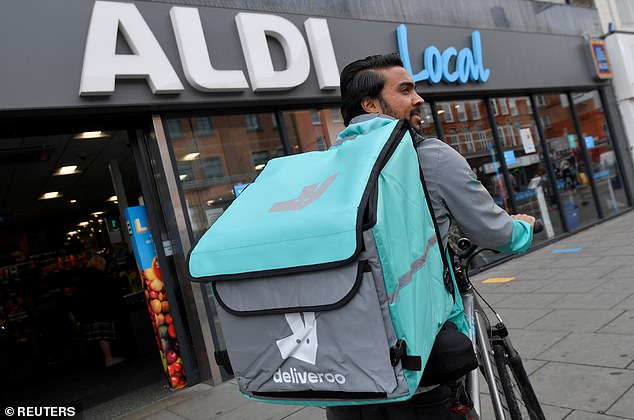 CEO Giles Hurley said the firm had to deal with ‘some of the most difficult conditions our sector has ever seen’.

The Covid-19 crisis prompted the group to accelerate its push into home delivery via a partnership with Deliveroo.

It has also introduced a click-and-collect service that’s now live in 200 stores, and is trialling a checkout-free concept store in Greenwich, southeast London.

Looking ahead, Aldi said its most important commitment to customers was to continue to keep its prices the lowest in the market as household budgets come under greater pressure.

According to The Grocer magazine, a basket of 33 everyday items at Aldi is on average 14 per cent cheaper than the Big 4 supermarkets, while the monthly price comparison survey by Which? for August showed Aldi to be 19 per cent cheaper on a trolley of 74 household goods.

Earlier this year, the company also maintained its position as the UK’s best-paying supermarket by increasing the minimum hourly rates for store colleagues to £9.40 nationally and £10.90 inside the M25.