Two women who had their confidence shattered by a life-changing accident and a string of failed relationships left viewers stunned with their impressive makeovers on last night’s 10 Years Younger in 10 Days.

Mother-of-two Jackie, 57, from England, hasn’t been the same since a horrific skiing accident left her permanently disabled, while mum-of-four Charlotte, 45, felt disheartened by two divorces and was so used to putting her children first that she lost sight of who she was.

Both travelled to London for Channel 5’s makeover show, where a public poll put Jackie at aged 68 and Charlotte at 52, considerably older than their actual ages.

It was a wake-up call for the women, who then entrusted the 10 Years Younger experts to advise them on treatments, new clothes, hairstyles and make-up.

Viewers were blown away by their glamorous transformations; one wrote: ‘Charlotte’s hour glass body shape is banging!’ 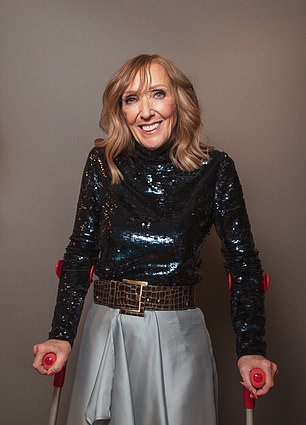 Two women who overcame incredible obstacles stunned viewers after appearing on last night’s 10 Years Younger in 10 Days on Channel 5. Pictured: Jackie, 57, left before and right after

Another remarked: ‘Woah that transformation on #10yearsyounger was amazing,’ while one gushed: ‘Jackie!!! Absolutely stunning.’

Jackie told how she’d been a happy mum who ‘saw the fun side of life’ before losing her husband Jeff. Not long afterwards her life changed forever when both legs snapped during a bad fall on the slopes, which resulted in permanent damage.

She now has to walk with crutches and wears jogging bottoms and leggings to hide her scars.

‘That day changed my life, suddenly I felt like I was an old age pensioner,’ she admitted.

‘A lot of me went with my leg, I gave up. I lost that battle and my lust for life. I just basically hate it, I hate the scars, this is what I’m trying to cover up all the time.

‘I want to be me again, the person I was before the accident, just the old me back.’

Jackie’s friend and neighbour June said she is a caring person who ‘would do anything for anybody’. 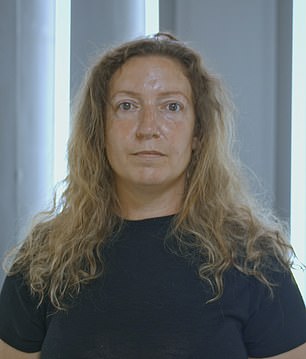 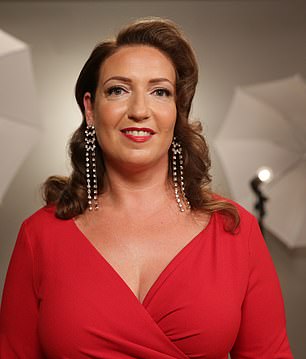 Before her makeover, left, Charlotte, 45, felt ‘worn down’ after two divorces and looking after her four children. People said she looked 52, seven years older than she actually was. Her makeover, right, gave her a new lease of life

‘I would certainly like to see her happier and smiling more,’ June added.

Finding out people thought she looked 11 years older than she actually was was a shock for Jackie, who told presenter Cherry Healey: ‘I shouldn’t be looking as old as that, it’s a wake up call.

‘I need to let go of the past, go out there and just live life to the full.’

Jackie’s first appointment was with Dr Tapan Patel, who had a look at her skin. 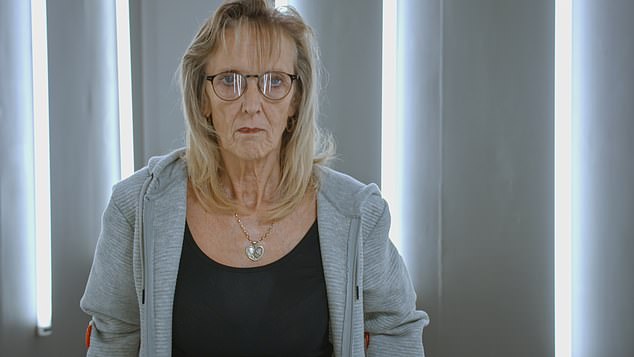 Jackie, pictured before, said she was fun and had a ‘lust of life’ before her accident took a part of her away

Before her accident, Jackie revealed that she lost her dear husband Jeff to a heart condition. She explained: ‘I’d been married to Jeff for 13 years, 13 wonderful, happy years, I loved him to bits.

‘He died in the Millennium and I lost the love of my life, my mate. We should have known about the heart condition, we didn’t know, none of us knew. With everything that’s happened, I aged dramatically.’

Dr Patel observed that Jackie had gone through a lot of trauma, which had altered her skin. He treated her with derma fillers to plump the skin on her cheeks, chin and forehead.

When she saw her face in the mirror following the treatment, Jackie couldn’t help but cry.

‘It’s me back, thank you so much,’ she said. ‘I can’t believe it, you’re amazing, everything is just gone. I’m feeling on top of the world, I’m absolutely buzzing, what’s happened today is the first step of the rest of my life, I’m blown away with it.’

Her next appointment was with cosmetic dentist Dr Uchenna Okoye. Jackie had grown increasingly embarrassed of her teeth, which had been damaged by years of coffee and sugar. 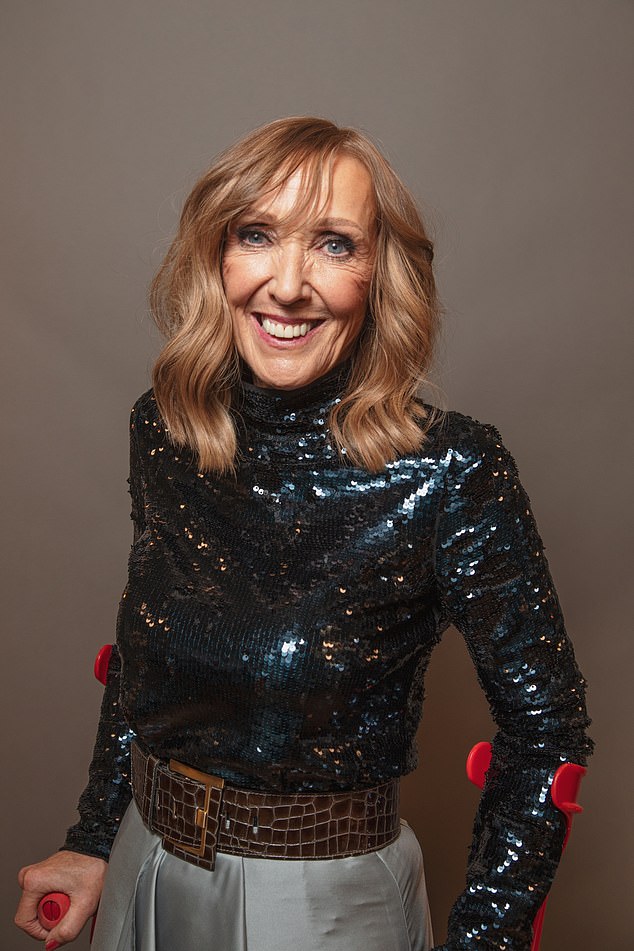 After her transformation, pictured, the mother-of-two said she felt ‘made up’ and beautiful People thought she was 53, four years younger than her actual age

Calling them her ‘house of horrors’, she admitted: ‘I’ve never liked my teeth, never been happy with them. I just hate them, it looks awful doesn’t it? I can’t look at the pictures.’

Dr Uchenna said:  ‘Jackie lost a lot of confidence because of her smile, it’s the classic case of everything has collapsed inwards.

The dentist fitted Jackie with pearly white veneers, costing £800 each, and crowns to fix the back of her mouth. The result left Jackie tearful once again.

‘It’s been a long time since I smiled,’ she said, wiping tears from her eyes. ‘I got my teeth back, thank you.’

Already feeling more confident, Jackie was ready to tackle the issue she struggled with the most.

‘I’m embarrassed about my leg, and I do need some serious guidance to show me what I can actually wear to reinvent me, to reinvent my wardrobe,’ she said.

Jackie was advised by celebrity stylist Gemma Sheppard, who tasked herself with making her reconnect with her figure. Gemma stressed how good Jackie’s body looked underneath her baggy clothes, and selected dresses to show her she could still be feminine. 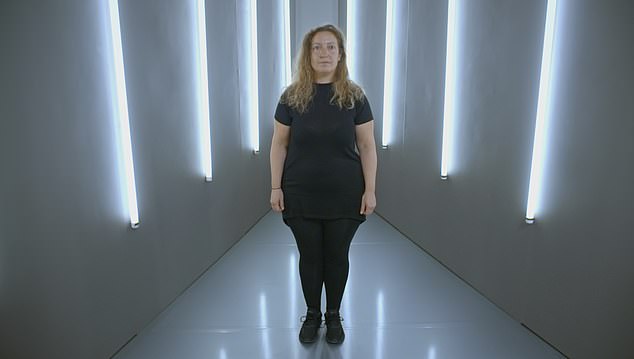 Charlotte was embarrassed by her curves before her makeover and would cover up in leggings and wide T-shirts. Pictured before

At the end of the session, Jackie was ready to take on the world; ‘I can actually be proud me, proud of my figure, proud of everything,’ she said.

When it was time for her big reveal, Jackie said she felt like a ‘completely changed woman’ – and when she caught a glimpse of her new look in the mirror, she was speechless.

Gemma had dressed her in a blue sequined top with a flowing grey skirt, white trainers and a snake print belt. Her blonde hair was newly coloured and styled by celebrity stylist John Vial, who gave her a modern wavy blow-dry.

She began to cry, asking: ‘It’s really me?’ to which an enthusiastic Cherry Healey told her: ‘It is you!’

‘It’s just incredible,’ Jackie went on, before admitting she hadn’t felt this way for ‘a long, long time’.

After her makeover, Jackie’s new look went through another public poll, and this time people said she looked 54 – three years younger than she actually is. 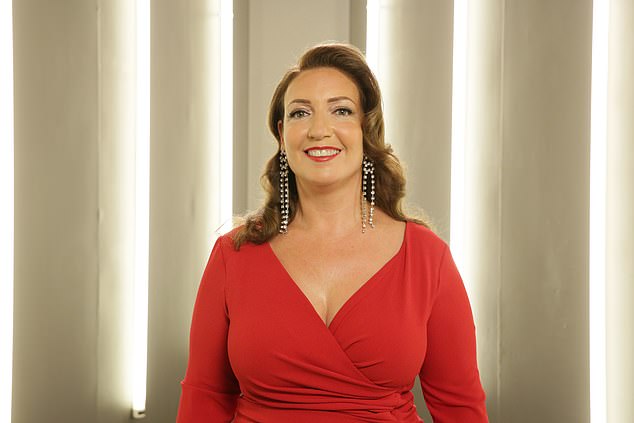 The makeover helped the mother-of-four embrace her curves in a lovely red dress that hugged her curves, pictured

‘I’m absolutely made up with that, that is amazing, I look a million dollars,’ she said, while Cherry told her she looked ‘absolutely priceless’.

‘I feel beautiful, I’ve got everything back and more and it’s incredible,’ Jackie said.

‘I just cannot stop smiling, literally, my cheeks ache. This is me, this is the true Jackie, and the Jackie that’s out there, proud to be out there and ready to face what’s out there as well, I have so much to look forward to, I just can’t wait.’

‘To have two husbands leave you, it’s embarrassing, because you feel like people must think “what’s wrong with her” and then you start to feel “is there something wrong with me, why has that happened to me twice?”,’ she said.

Charlotte is raising her children by herself, with her youngest experiencing health issues.

‘My youngest son, Blake, he’s got a condition where he’s completely blind in his left eye, and he’s extremely sensitive to sunlight,’ she said.

Her second youngest son had developed asthma aged 10. She explained: ‘He had been an active child but all of a sudden he was struggling to breathe,’ adding she slept with her son to make sure he was sleeping at night. ‘It’s been quite a journey.’

Due to raising her children by herself and her divorces, Charlotte’s looks had changed and her confidence had wavered. Her mother agreed that Charlotte had put herself ‘second best’ and always made her children her priority. 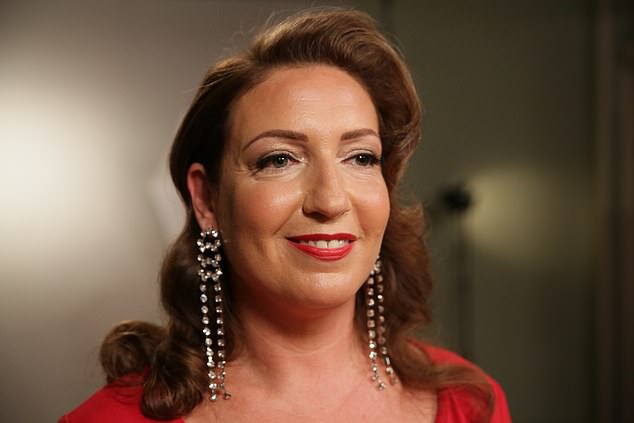 Charlotte, pictured, said it felt good to be groomed for once, and to be looking this glamorous. She said she was ready to discover the new her

‘I’m hoping and praying that, with a new lease of life, that would make a very big difference to her because she deserves it,’ she said.

In the poll people put Charlotte at seven years older than she actually is. She told Cherry: ‘I just feel tired, I look worn out from the past three years.

‘I separated from my second husband and it’s been a bit of a uphill struggle, really. You’ve got children that need you and I’ve been primarily concerned with their health, really.

‘That just made me withdraw, I rarely go out with friends. It’d be nice if I was less invisible like I seem to be these days. I felt a bit disheartened I got the poll age of 52, I’m definitely ready now to turn back the clock and take care of myself.’

The mother-of-four’s body had changed in recent years, and she was embarrassed by her curves.

‘I’ve been out with friends recently, and regardless of how hot it is at the venue, I’ll keep my coat on, to hide what I’m wearing and hide my body,’ she admitted.

She regularly counted on leggings and black tees to hide her figure, but that was about to change during her session with Gemma Sheppard, who helped her accept her curvy side.

‘I’m obsessed,’ Gemma said of Charlotte’s body, after telling her thousands of women would kill to have her bum and comparing her to Jessica Rabbit.

She put Charlotte in a flared pair of jeans and several dresses tied with statement belts at the waist. The session helped Charlotte feel feminine; she said: ‘I didn’t think [I would] in a million years, but I really do love my curves.

‘In the past I used to look so much more glamorous, I’d put make-up on everyday. As I’ve got older, I’m a bit worried to make myself look like a drag queen rather than improve my features.’

She met with celebrity make-up artist Hannah Martin, who taught her how to do a winged eyeliner to spruce up her going-out look in a few simple steps. She then headed to beauty therapist Nilam Holmes, who microbladed her eyebrows.

Charlotte had been left with a permanent orange tint on her eyebrows after a technician did an awkward job on her several years ago. Nilam used green tint to blend in the orange and turn her eyebrows a more natural blonde.

Charlotte was delighted with her new sculpted eyebrows and was ready for the final stage of her makeover – the reveal.

‘You look like a film star,’ Cherry told her, before Charlotte could see herself in the mirror. Gemma had dressed her in a fitted satin red dress that accentuated her waist, with glittering drop earrings.

Hannah had given her a glamourous make-up look and John Vial dyed her hair a vibrant red tone, with a glam 50s-style blow-dry.

‘Oh my god,’ Charlotte said. ‘The hair is lovely, I love the colour, I love the wave. I feel really, really good. It’s nice to feel groomed and polished for a change, it’s nice to be styled and be so glamourous.’

Charlotte’s son Blake was also blown-away by the makeover, admitting: ‘If she picked me up from school like that I don’t think I’d recognise her.’

Charlotte is now ready to look forward to the future, adding: ‘I’m ready to discover the new me, I’m really going to focus on myself and enjoy life.’

10 Years Younger will return for a new season this autumn, and is available on My5.