New dinosaur discovered in Germany! Skeleton stored in a university museum for 100 years is a previously unknown species, study reveals

The skeleton of a long-necked dinosaur that has been residing in a university museum in Germany for 100 years is actually that of a previously unknown species, a new study has revealed.

The skeleton was found in Trossingen, south-western Germany, in 1922, and is now part of the University of Tübingen’s paleontological collection.

At the time, it was identified as belonging to a Plateosaurus – a herbivorous dinosaur with a long neck and grasping hands that lived during the Late Triassic period, around 214 to 204 million years ago.

However, a new analysis by paleontologists at the University of Tübingen has revealed it is a previously unknown species, which they have named Tuebingosaurus maierfritzorum.

Tuebingosaurus was a herbivore and had similarities with the large long-necked dinosaurs known as sauropods.

It lived about 203 to 211 million years ago in the region now known as Swabian Alb.

The Tuebingosaurus skeleton consists mainly of the rear of the body (depiction of the bones with a silhouette). The attribution of the bone marked in grey (fibula) is uncertain.

The Tuebingosaurus skeleton consists mainly of the rear of the body, and the new analysis established that many of the bones were not the same as a typical Plateosaurus.

For instance, the partial skeleton has broader and more strongly-built hips with fused sacral vertebrae, as well as unusually large and robust long bones – both features that imply locomotion on four legs.

This is unlike the Plateosauridae, which although resembling the long-necked sauropods from the Jura region likely moved on only two legs.

The researchers suggest that Tuebingosaurus was more closely related to the later large sauropods such as Brachiosaurus or Diplodocus than with the Plateosauridae.

The surrounding sedimentary rock and the preservation of the bones indicate that this Tuebingosaurus had sunk into a swamp and died.

The bones on the left side of the body were probably on the surface and exposed to the elements for several years. 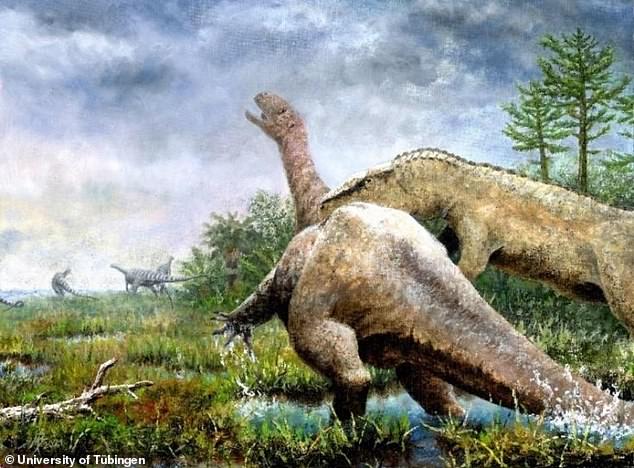 Reconstruction how the death of Tuebingosaurus maierfritzorum may have occurred. Bones of the predatory dinosaur Teratosaurus were also found in Trossingen. However it has only been proven that Tuebingosaurus fell on its right side. Weathering indicates that the bones on the left side of the body probably lay for several years on the surface. 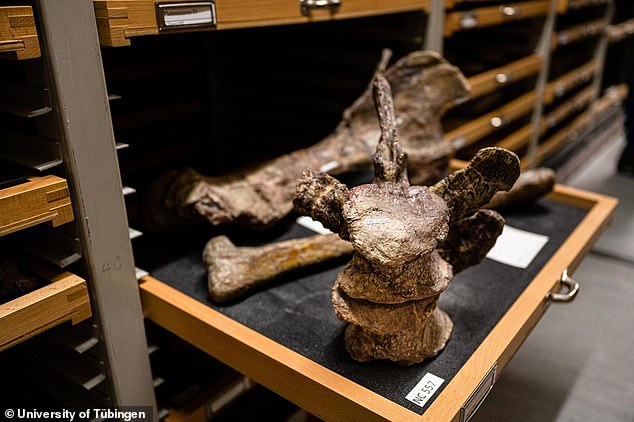 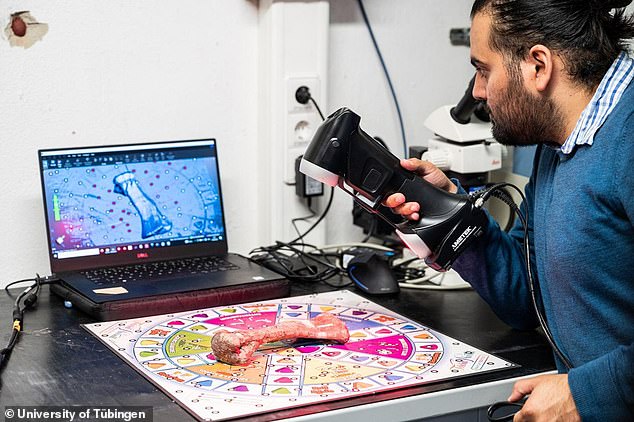 3D image of a footbone from Tuebingosaurus being made with a handheld laser scanner. The colored base with reflective points provides a spatial reference system for the software

‘Its genus name, Tuebingosaurus, is a homage to our beautiful university city and its inhabitants,’ said Dr Ingmar Werneburg from the University of Tübingen.

While it is undisputed that Plateosauridae were very common in parts of Europe about 200 million years ago, contemporary paleontologists are well aware that taxonomical classification in the past was often inaccurate.

This led to some discoveries being too rapidly attributed to the Plateosaurus genus.

The researchers claim their study, which has been published in the journal Vertebrate Zoology, shows the early European dinosaurs were far more diverse than previously thought.

The individual parts of the skeleton of Tuebingosaurus maierfritzorum, which until now have been stored separately, are now reunited and can be seen in two large display cabinets at the museum.