Dietitian: This is what the perfect school lunchbox looks like – and the foods you should never include

A dietitian has revealed exactly what the ideal lunchbox looks like for school-age children, and the foods you should and shouldn’t include as a parent.

Jaime Rose Chambers, from Sydney, shares daily pictures on Instagram of what she makes for her own children, and says it doesn’t matter if things can feel a bit ‘same-ish’, as lunch is only one meal of the day and there are plenty of other meals and snacks.

When it comes to lunch for her own two kids, Jaime favours a ‘picky’ approach – whereby she includes a number of different foods separated into different parts of a container.

‘Picky lunches’ are ideal for fickle young eaters, Jaime explained, as it’s typical at this age that kids want to ‘see’ the different elements of their meal individually.

A dietitian has revealed exactly what the ideal lunchbox looks like for school-age children, and the foods you should and shouldn’t include as a parent (pictured) 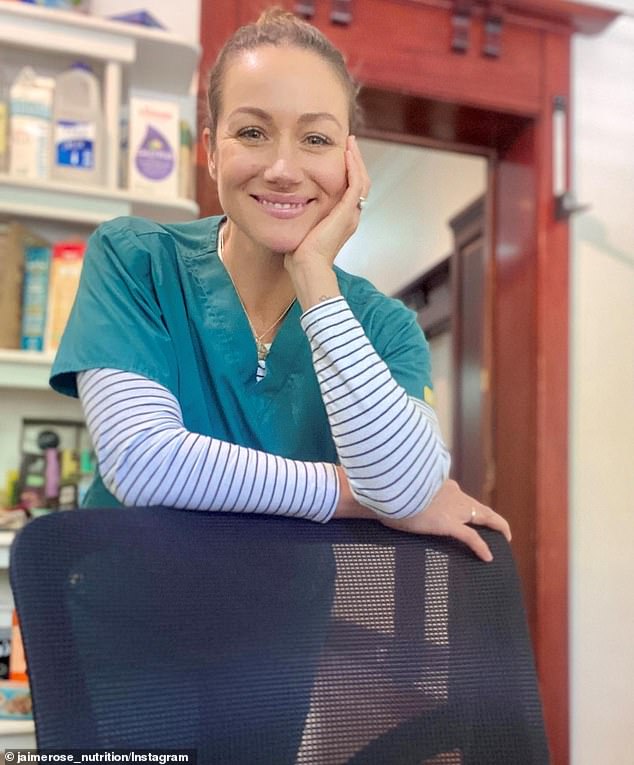 When it comes to lunch for her own two kids, Jaime (pictured) favours a ‘picky’ approach – whereby she includes a number of different foods separated into different parts of a container

But, she adds ‘minor adjustments’ which help to widen their palette and provides a broad range of nutrients.

‘Always try to give fruit and veg and other foods that don’t travel well in a lunchbox at other food times,’ she said.

On this particular occasion, Jaime said she wanted a meal that would survive a Saturday filled with errands.

‘I bring a box like this for the days I’m out and about with the kids doing soccer, swimming and playgrounds, so we’re not stuck having to buy food or with hangry kids,’ Jaime posted on Instagram.

She recommends always quartering foods like strawberries and grapes if your children are young to prevent a choking risk. 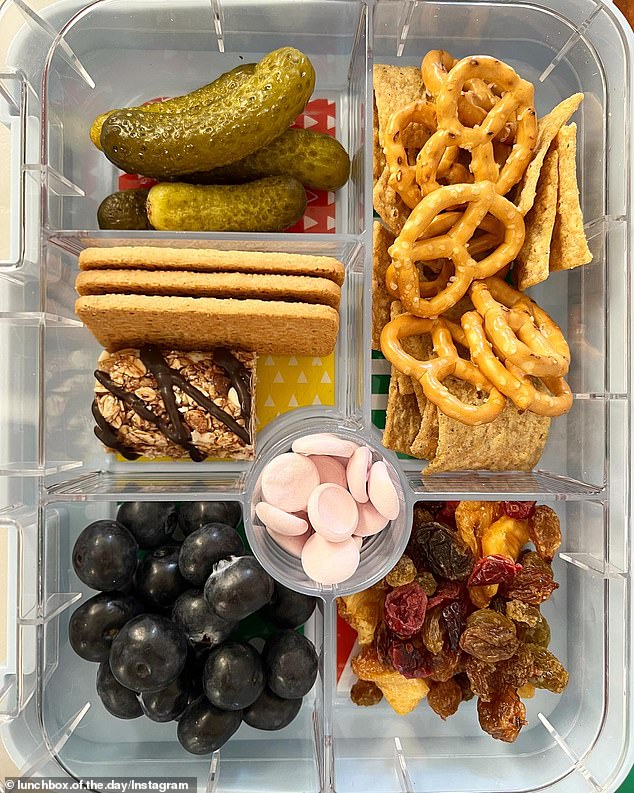 For primary-school aged children, Jaime recommends trying to keep their lunch food ‘familiar’, but then she makes ‘minor adjustments’ to broaden their palette

When it comes to what you should and shouldn’t include in a school or packed lunchbox, Jaime said the most important thing to think about is whether something will travel well.

She always packs sandwiches – ham and cheese on wholegrain bread and jam sandwiches are favourites with her children – because they last well and are popular.

Jaime tries to steer clear of white bread as much as possible.

The dietitian also likes to include things that will work well for a snack, like yoghurt pouches or smoothie drops, which are a good source of dairy, as well as plenty of cut-up fruit and veg.

What to include in a lunchbox

* Cut-up sandwiches on white or wholegrain bread, crusts on or off

What to avoid in a lunchbox

* Nuts or items with nuts in them

* White bread as much as possible

* Too much candy, chocolate or overly processed foods

* Bananas without the skin on to prevent them dying 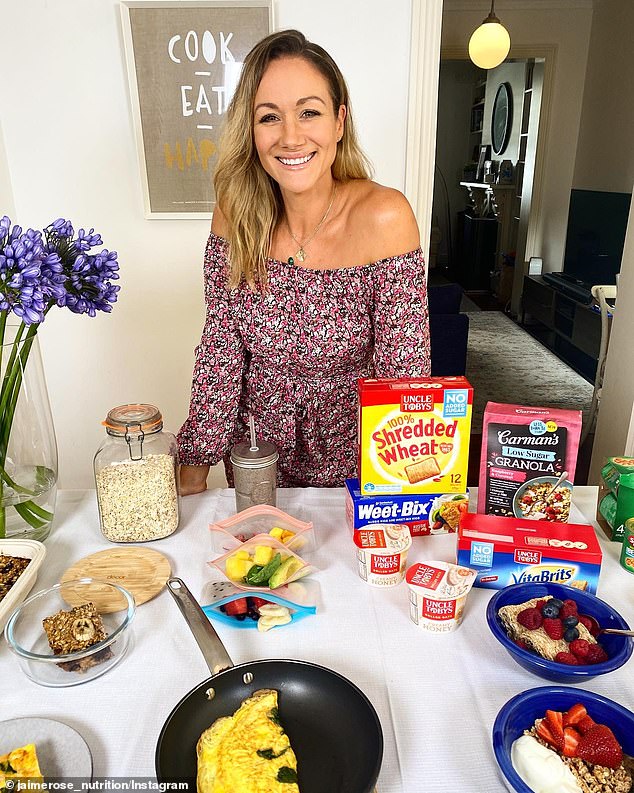 Jaime recommends you include as much as possible from the different food groups of carbohydrate, fibre and protein 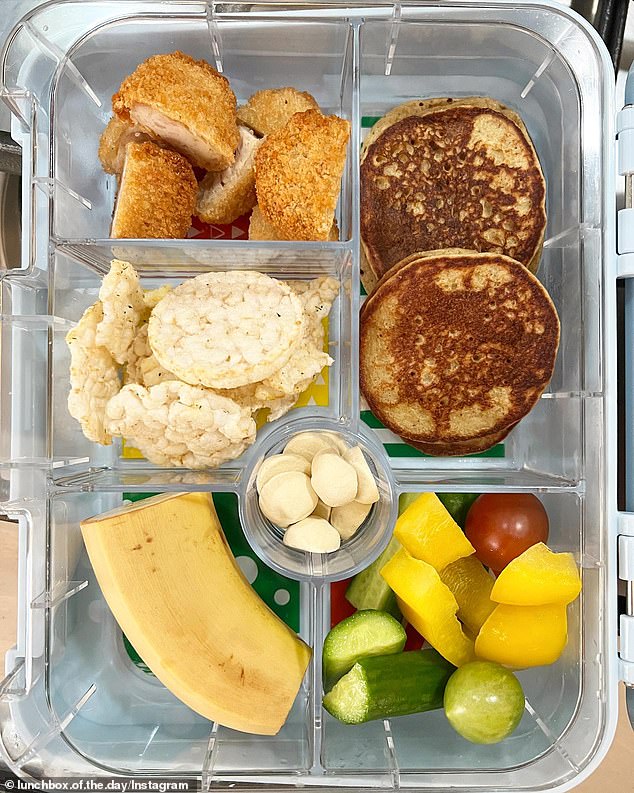 Jaime said the food items you should avoid as much as possible are things like nuts due to allergies, and anything too wet that won’t travel well (one of her lunches pictured)

• A source of wholegrain: grainy bread, grainy crackers like Vitaweats – she keeps the fillings plain so they don’t go soggy and offer them separately eg, ham.

• A source of protein: fresh ham, boiled egg, cheese, left over lean sausages or chicken nuggets or a yoghurt.

Jaime is realistic and explained she does always include something her kids will enjoy, like a healthy chip or pinto and pea sticks, or chcolate bliss balls.

She uses a piece of kitchen towel with foods like watermelon, as this stops the entire box from becoming soggy.

Jaime said the food items you should avoid as much as possible are things like nuts due to allergies, and anything too wet that won’t travel well.

For more information about Jaime Rose Chambers, you can visit her Instagram page here. You can also visit her website here. 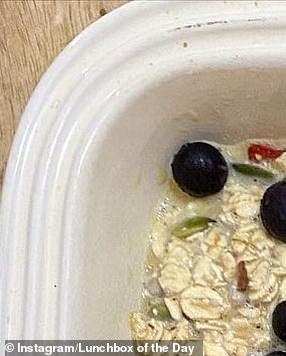 One heaped teaspoon of baking powder

One cup (270 grams) of stewed apple or unsweetened apple sauce

1/2 a cup of maple syrup, plus extra for serving

One cup (125 grams) of frozen mixed berries for flavouring

2. In a large bowl, combine the oats, coconut and baking powder, and set aside. In another bowl, whisk the eggs, apple, milk and maple syrup until combined.

3. Pour the wet ingredients into the oat mixture and stir to combine. Spoon the mixture into the baking tray and combine with the below flavouring. Bake for 25-30 minutes. Serve with the yoghurt of your choice.

FLAVOURING: Mix together one cup (125 grams) of frozen mixed berries, 1/2 cup (60 grams) of roughly crushed walnut halves and two teaspoons of ground cinnamon. Scatter the berry mixture over the oats before baking.

4. Let the baked oats harden in the fridge overnight if wanting to slice them into a muesli slice for your children.