If Fido could do with losing a few pounds, there are diet tricks that can help.

Top strategies include using food puzzles, so that instead of wolfing down the contents of their bowl in one go, dogs are forced to eat more slowly.

Owners might want to try softly playing some classical music, which has been found to make dogs less stressed, to help prevent them overeating.

People also need to think about our own psychology, a new scientific review states.

If Fido could do with losing a few pounds, there are diet tricks that can help. Top strategies include using food puzzles, so that instead of wolfing down the contents of their bowl in one go, dogs are forced to eat more slowly

Going from high to low risk of being overweight/obese according to the Royal Veterinary College:

There is often a temptation to sneak dogs food from the dinner table as a treat, like roast chicken or sausages, but in fact dogs do not require culinary variety like we do, and will be perfectly fine eating the same food day in and day out.

The tips come from Professor Charles Spence, a food psychologist from the University of Oxford, who has done extensive research on how to ‘nudge’ people into eating less healthily.

He turned his attention to dogs after the Royal Veterinary College last year revealed a canine obesity crisis, with one in 14 dogs recorded as overweight by their vet each year.

Professor Spence said: ‘It can make a real difference if owners use dogs’ evolutionary hunting behaviours by giving them toys which encourage them to complete a maze or sniff out hidden food, and so they have to work a little harder for their food.

‘That is much better than simply putting the food out in front of them for every single meal.

‘It is really tempting to want to spoil dogs and treat them like they are humans rather than a different species, using food to control their behaviour or show them we love them.

‘But giving them human food makes it much harder to judge how much they are eating and the calorie content.’

People can be ‘nudged’ into eating less by giving them smaller plates, which look like they contain more food, or a blue plate, which makes a meal appear less appetising.

These methods do not work in dogs, whose food appreciation is much less visual due to their limited colour vision.

But Professor Spence advises that portion control is just as relevant for pets as people. 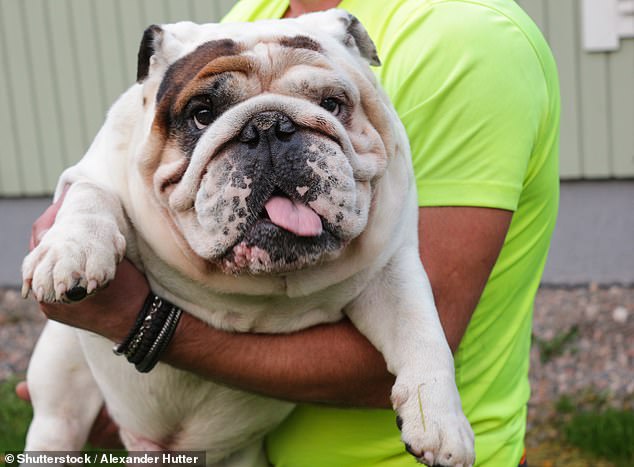 The Royal Veterinary College revealed a canine obesity crisis, with one in 14 dogs recorded as overweight by their vet each year. Pictured: An overweight English bulldog being held by its owner

There is currently no universally‐accepted definition of obesity in dogs, with the terms ‘overweight’ and ‘obesity’ often used interchangeably.

This is different from humans, who are classed as underweight, healthy, overweight or obese based on their body mass index (BMI).

However, there is little evidence for the nature of an ‘optimal’ bodyweight nor for the cut‐off at which weight gain becomes problematic.

Smart bowls are now available which record how much a dog is eating.

The food scientists notes that classical music and a vanilla scent appears to calm dogs down, which may help to prevent them from overeating.

However there is no research on this yet, so dog owners should be cautious about trying it, and wary of overstimulating their dog with smells and music which could make them more stressed.

They typically simply like warm, moist food and meaty tastes, usually preferring beef and pork over chicken and lamb, and don’t particularly care if things are crunchy or different to what they normally eat.

While some dogs might be greedy, they have a less discerning palate than people, having about 1,700 tastebuds, where we have around 9,000, and about a sixth of our ability to pick up flavours.

But they may enjoy food more when they have to hunt for it in toys, Professor Spence says, which also provides exercise to ward off obesity.

Such toys offer relief from boredom too, and help dogs to cope with separation anxiety when their owner is away.

Responding to the review, published in the journal Applied Animal Behaviour Science, Dr Sean Wensley, a senior vet who has published a book called Through A Vet’s Eyes, said: ‘This study reveals some interesting areas for further research, but we should also remember the tried and tested advice to feed according to packet guidelines, give suitable treats in moderation and regularly monitor your pet’s weight with the help of your local veterinary practice.’

The ulti-mutt fitness partner! Dogs whose owners spend a lot of time exercising are more likely to be fit themselves, research reveals

Talk about puppy fat! One in 14 dogs is OBESE – with pugs, beagles, golden retrievers and English springer spaniels at highest risk of piling on the pounds, vets warn

Overweight people are more than twice as likely to have overweight dogs, a 2019 study found.

The team of Danish study authors said this is at least partly because they are guilty of feeding their pets fattening treats.

Writing in their study the authors claim this  lends credence to the saying ‘like owner, like dog’.

‘The prevalence of heavy or obese dogs is more than twice as large among overweight or obese owners (35 per cent) than among owners who are slim or of a normal weight (14 per cent),’ the researchers from the University of Copenhagen said.

Of the 268 dogs studied, 20 per cent were found to be overweight.

The study’s main author, Charlotte Bjornvad, said: ‘For example, when a person is relaxing on the couch and shares the last bites of a sandwich or a cookie with their dog.’

The University of Copenhagen study also showed that castration tripled the risk of being heavy or obese.

‘Castration seems to decrease the ability to regulate the appetite in male dogs and at the same time, it might also decrease the incentive to exercise which results in an increased risk of becoming overweight,’ Professor Bjornvad said.

Separate research published earlier this year found pet dogs who are overweight from too many treats could see their lives shortened by more than two years, a study has found.

Researchers tracked more than 50,000 dogs from the 12 most popular breeds over two decades to see how their weight affected their health.

They found every breed, from shih tzus to golden retrievers, had shorter lives.