‘See you soon’: Diego Maradona’s daughter Dalma, 33, pays emotional tribute to Argentina legend with a sweet photo of herself pushing a daisy into her father’s football socks as as child

By Gerard Couzens for MailOnline

Diego Maradona’s eldest daughter today told her dad ‘see you soon’ in her first emotional tribute since his death on Wednesday.

Actress Dalma Maradona, 33, one of the soccer legend’s two children with ex-wife Claudia Villafane, posted a touching photo of her pushing a daisy into her father’s football socks as a child.

In the caption she wrote: ‘I always feared my own death a lot but not now…because I know that is going to be the moment I am going to see you and hug you again.

‘I’m already missing you daddy. I’m going to stick it out here, without that piece of my heart that you took with you.’

Actress Dalma Maradona, 33, one of the soccer legend’s two children with ex-wife Claudia Villafane, posted a touching photo (pictured) of her pushing a daisy into her father’s football socks as a child

Ms Maradona was one of the pallbearers at the funeral on Thursday and is mother to a 20-month-old daughter called Roma with husband Andres Caldarelli.

She added: ‘I’m going to love you and defend you my whole life because I appreciate the life we shared together.

‘I’m devastated but I’m going to pull through.’

Referring to a famous song called ‘Como es el’ by Spanish songwriter Jose Luis Perales, she wrote: ‘Wait for me there. We’re going to see each other again. I’m going to practice “Y como es el” so that when we see each other we can sing it together again. Well, you will sing it beautifully and I’ll shout it.’

She revealed her daughter Roma already loved her grandfather and would miss their video calls, adding: ‘If your grand-daughter wants to make a video call to you like in the past, I’m going to die inside, but rest assured I’ll tell her exactly who you were, who you are and who you’re going to be for ever. 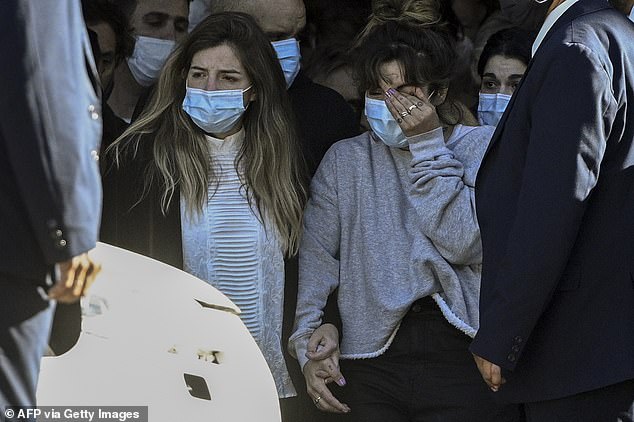 The daughters of the late Argentine football legend Diego Maradona, Dalma (left) and Giannina, leave the Casa Rosada presidential palace at the end of the wake in Buenos Aires

‘She already loves you. Because you were like that….it didn’t take much to love you.

‘I’m picking up my pieces and can’t imagine what my life will be like without you. I really can’t. But here I am with the best husband in the world and a daughter who is going to make me carry on.

‘Life is fleeting so we’ll see each other again soon.

‘I’ll carry daisies to decorate your football socks and please look at me again with that love you see in the photo. I love you for always.’

Ms Maradona’s younger sister Giannina was formerly with Man City star Sergio Aguero and they have an 11-year-old son called Benjamin together.

Giannina has yet to make any public comment since her father’s death at his rented home near Buenos Aires.

He passed away in his sleep, less than a month after his 60th birthday, around midday on Wednesday. His death has been attributed to heart failure which caused a pulmonary edema.