Ian Stewart, 59, was jailed for life in 2017 for the murder of Miss Bailey, 51, who wrote the Electra Brown books.

A court heard he wanted to get her near-£4million fortune.

He has now been charged with killing Diane Stewart, 47, in 2010. She collapsed at the couple’s home in Cambridgeshire.

At the time it was recorded as ‘sudden unexpected death in epilepsy’.

Stewart, who is serving a minimum 34 years for Miss Bailey’s murder, appeared at St Albans Crown Court yesterday and was remanded in custody.

Miss Bailey vanished from the £1.5million Hertfordshire home she shared with Stewart in 2016. Her body was found dumped beside her dog in a cesspit months later.

The last time he was seen in public three years ago, Ian Stewart was being led away in handcuffs from the dock at St Albans Crown Court – about to embark on a life sentence for the murder of his fiancee Helen Bailey.

Nobody who saw him that day in court No1 will ever forget the beseeching look he threw towards the public gallery, to the very spot where his sons from his first marriage were sitting.

It was as if, despite everything they’d heard during his trial, he still hoped that the two young men he always referred to as ‘the lads’ might still believe in him or, at the very least, find it in their hearts to carry on loving him.

How agonising for them must have been the news which emerged yesterday, that their 59-year-old father has again been charged with murder – this time of their own mother.

It was in the months following her death in June 2010 that Stewart met children’s author Helen Bailey via a Facebook page for widows and widowers.

She had lost her husband at the beginning of February 2011. So began a new romance for the pair which ended with Helen’s murder in April 2016.

Stewart’s first wife, school secretary Diane, had just celebrated her 47th birthday when she died in the garden at the family’s home in Cambridgeshire in June 2010.

But, despite attempts to resuscitate her in the garden, the mother-of-two could not be saved. 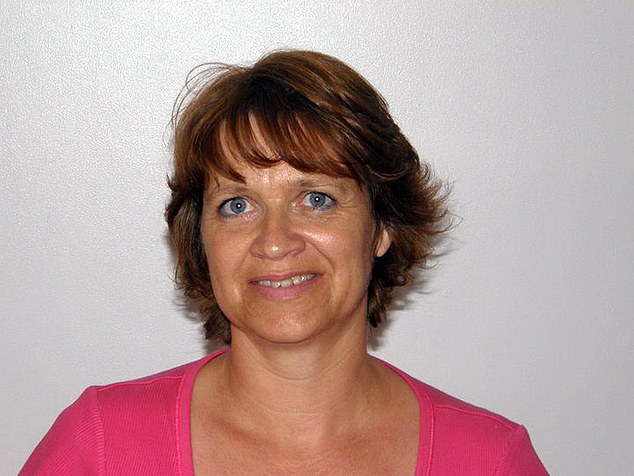 Now Stewart, 59, has now been charged with the 2010 murder of his first wife Diane Stewart (pictured), 47, whose cause of death was deemed as epilepsy

At the end of an inquest, her death certificate recorded that she had died of natural causes possibly linked to the epilepsy she suffered.

Yesterday Stewart returned under guard from prison to court where discussions with Judge Michael Kay took place about arrangements for him to enter a plea. He did not speak at the hearing and is next due to appear in court on September 21.

Those who knew the Stewarts describe the death of Diane a decade ago as an unremitting tragedy which left a family with young children in heartrending tatters.

The family were hugely popular with neighbours in Bassingbourn, where Diane is still remembered as an adoring mother and a stalwart of the community.

She was a long-term committee member at Bedfordshire and Cambridgeshire Wing Air Training Corps Bassingbourn squadron where her sons, Jamie and Oliver, who are now aged 28 and 25, were members.

Meanwhile, Stewart was an enthusiastic local league bowls player. Her death left the boys without a mother and Stewart as a widower.

The son of a teacher, Stewart grew up in Letchworth in Hertfordshire and met Diane Lem in 1981 when they were undergraduates at Salford University where he was studying computer science and Diane was on a German course.

He embarked on a PhD course at Cambridge University, but eventually dropped it for a job as a computer technician. He and Diane married in Derbyshire in 1986 when he was 25 and she was 23 and they had been married for 24 years when she died. 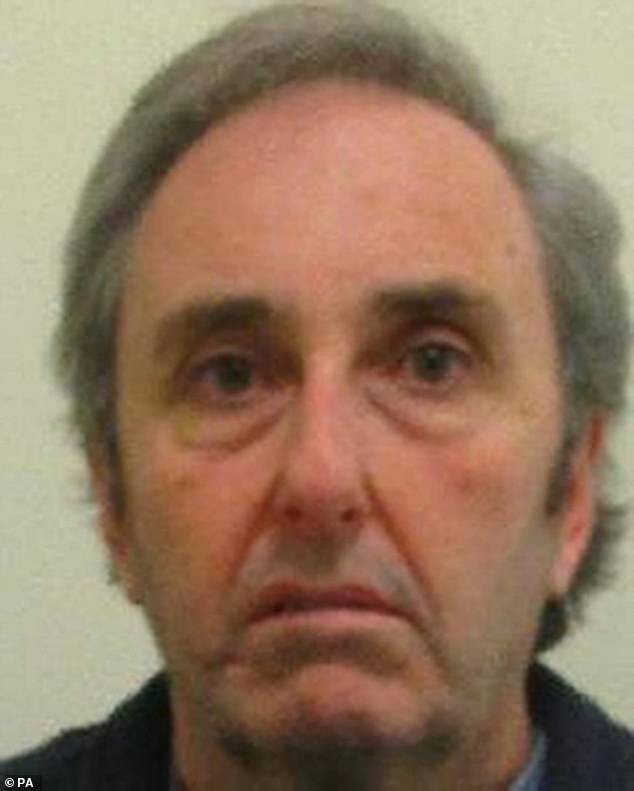 Stewart, now 59 years old , was jailed for a minimum of 34 years in 2017 for the 2016 murder of his second wife after he wanted her fortune which was valued just below £4million

‘They were a lovely family,’ a neighbour told the Mail. ‘We just feel so dreadfully sad for the boys. We’ve seen them growing up all the way.’

Over the years that followed her death, Stewart gave every appearance of being a quiet family man and a doting and hands-on father.

He rarely worked because of long-term health problems – a legacy of accidents earlier in his life. According to one of his cousins, as an 18-year-old he fell through a plate glass door at Stevenage leisure centre in Hertfordshire which left him with permanent scars all over his body.

In his 20s, he suffered a head injury during a fall and was off work for lengthy periods. Away from an office environment, he dressed casually in jeans and grew a beard. He was often seen on the sidelines when Oliver played hockey for a club in Royston.

Stewart had been a widower for less than a year when he contacted Helen Bailey via a Facebook bereavement page in 2011. She was also widowed – her husband John Sinfield drowned in the sea in February 2011 after being caught by a riptide while they were on holiday in Barbados.

She was forced to endure the agonising memory of watching him being pulled beneath the water. She later described February 27, 2011 as the day she was ‘a wife at breakfast’ and ‘a widow by lunch’. She was 23 when she met Mr Sinfield, a former BBC executive.

The public health inspector’s daughter, who grew up in Ponteland in Northumberland, studied physiology at Thames Polytechnic and embarked on a PhD, but swapped her lab coat for life as a secretary. It was while temping in 1987 that she was sent to work at Mr Sinfield’s licensing rights company.

They embarked on a relationship at the height of the ‘yuppy’ boom, setting up home in London and driving around in a Lotus Elan sports car. They married in Barbados in May 1996.

The popular author poured out her feelings of despair in an online blog called Planet Grief which became the best-selling memoir When Bad Things Happen In Good Bikinis.

When she met Stewart, seven months after John’s death, it took time for romance to develop and she admitted that some of her online followers were upset that she had started looking for love again so soon.

‘It was like stepping on the internet equivalent of a landmine,’ she admitted.

At first she and Stewart – who she referred to as the ‘Gorgeous Grey-Haired Widower’ – simply exchanged messages about their grief and mutual despair.

‘It was all very innocent,’ Helen recalled in an interview to publicise her grief memoir a few months before she died.

‘We were having discussions about bacon sandwiches and whether we liked red sauce or brown sauce. There was nothing even slightly romantic at all there. And then he went away from Facebook – he couldn’t be bothered with it.’

But in August 2011, when rioting broke out in London, he sent Helen a message, asking: ‘Are you OK?’ They started chatting again and arranged to meet up near Helen’s home for a walk with her dog Boris.

Their first date – a trip to the National Portrait Gallery and an afternoon screening of Tinker, Tailor, Soldier, Spy in Leicester Square – was a ‘disaster’, Helen later recalled.

‘It was too much, too soon,’ she wrote. ‘It was a date of becoming trashed on wine and crying and just feeling horrible. So we agreed it was a bad idea and decided not to see each other.

‘But I missed him. I missed not hearing from him and I missed the silly emails and chats so we decided to go back to straightforward dog walking again and I was giving great speeches about how I didn’t want a relationship.’

Eventually, however, she changed her mind. Helen recalled how while out walking Boris one day near her home in Highgate, Ian fell over in the mud and couldn’t get his wellies out of the quagmire.

‘He was pulling them and we were just bent over laughing and he looked up and said: “It’s not funny!” And I remember just thinking, “I don’t want to lose this man”.

In 2013, the couple sold the homes they had shared with their spouses and bought a stunning detached house on the outskirts of Royston which had an acre of land and an outdoor swimming pool. They shared the home with Stewart’s two sons. 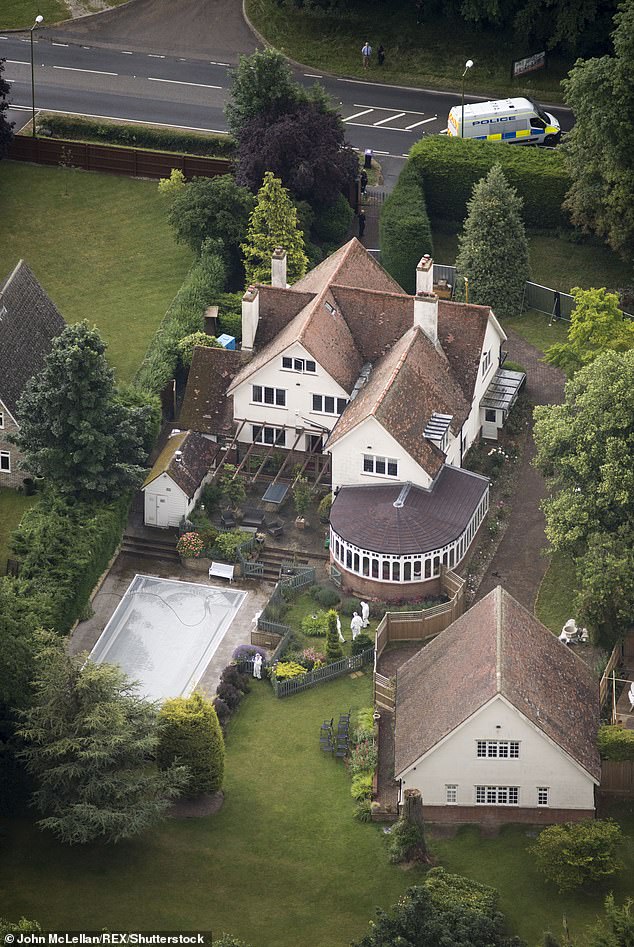 In 2013, Stewart and Ms Bailey sold the homes they had shared with their respective spouses and bought a stunning detached house (pictured) on the outskirts of Royston 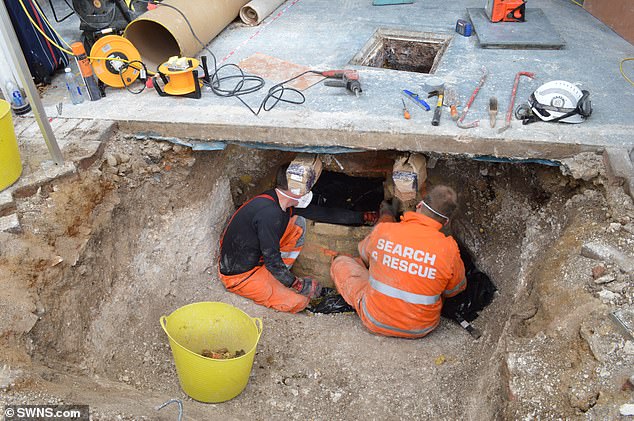 Ms Bailey’s body was found in July 2016 after forensics were informed of a 15ft deep underground cesspit (pictured) tucked away under the floor of the garage. It had been installed to act as a ‘well’ by a previous owner who had joked to neighbour it was the ‘one place to hide a body’

Helen, who had no children of her own, often joked about the male-dominated environment in which she found herself.

She said: ‘I genuinely can’t get my head around why this household gets through so many toilet rolls or biscuits or why damp washing is left in the machine for days.’

She wrote online in February 2016, a few months before she was murdered: ‘It’s not easy living in a household that has only come together because of the death of other people, but losing those we love has made us cherish what we have now.’

Their house, Hartwell Lodge, was sold last year to a young family.

As a general rule the media are prevented from publishing a defendant’s previous convictions. But in the case of Stewart the usual restrictions have not applied.

In court yesterday, Judge Kay ruled that it would be almost impossible for the public to forget Miss Bailey’s murder and Stewart’s guilt given the global coverage the case received.

Her remains were eventually found along with those of her beloved dachshund Boris in a cesspit beneath the garage at the couple’s home .

One can only imagine what Jamie and Oliver Stewart must have felt, watching that murder trial three years ago.

But what they face now, of course, is far worse – the torment of seeing their father tried for the murder of their beloved mother.