Detectives have launched a murder inquiry after a man in his 60s fell to his death from the third floor balcony of a young woman’s flat.

Neighbours heard screams and shouts after Gary Henderson, 64, from Essex, fell around 30ft from the flat in a block off a road in Ipswich, Suffolk, at about 2.30am yesterday.

Suffolk Police said a post mortem examination conducted on Wednesday found that he had died from a severe traumatic head injury at the scene.

A 27-year-old man from Ipswich was arrested on suspicion of murder this afternoon and is currently being quizzed by detectives.

Gary Henderson, 64, from Essex, plunged to his death from this third-floor balcony in Ipswich (pictured today) 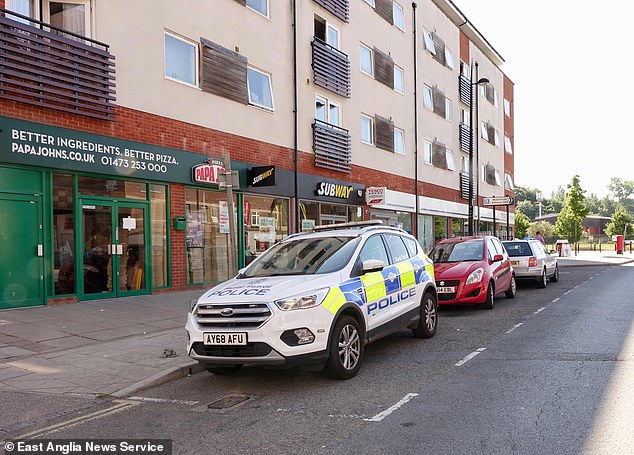 A police statement said a 26-year-old man from the Harwich area who was previously arrested on suspicion of murder has been released under investigation.

The 24-year-old woman arrested on suspicion of murder has been freed on police bail until July 22, pending further inquiries.

Mr Henderson is thought to have fallen over a waist-high railing on a wooden slatted balcony facade at a rented two-bedroom flat onto a path in a garden courtyard.

The scene was sealed off as forensic officers hunted for potential evidence inside the flat, and asked residents if they had seen or heard anything suspicious.

Officers remained on the scene this morning, guarding the corridor outside the flat.

Gary Henderson lived alone with his cat in a semi-detached cottage in Upper Dovercourt near Harwich, Essex.

Neighbours said he was unmarried and had no children, and was a keen fisherman who ‘loved to help people’.

One neighbour said: ‘I don’t know what connections he had with Ipswich so it is a mystery what he was doing there.

‘He did not have a car and went everywhere by bicycle. He hardly ever went further afield than Harwich.’

Another neighbour Janice Clay, 60, said: ‘He was a very friendly neighbour although he kept himself to himself.

‘He helped us out when we first moved here three-years-ago and let us park on his drive. He was lovely. 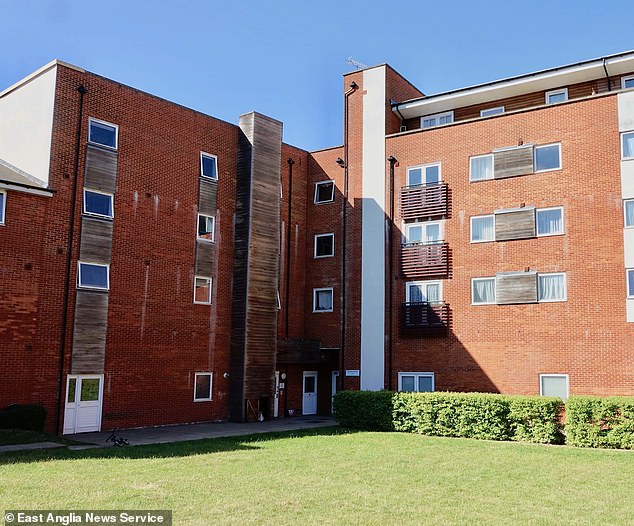 ‘He was always here for everybody. We are now worried about his cat because he worshiped it. We don’t even know where it is.’

Another woman living opposite his cottage said: ‘He was the nicest man possible. He wouldn’t hurt anybody. He was just a lovely man.

‘I haven’t got a clue what he was doing down in Ipswich. I have no idea about why he went to that flat.’

The block of flats which borders a redeveloped dockland area has a Tesco Express, a Subway and Papa Johns pizza takeaway on the street-facing ground floor.

One local resident said: ‘I was woken by a woman screaming and shouting in the early hours. Then there were police and emergency services everywhere.

‘We don’t know what happened. Everyone is just feeling sorry for the man who died. It is just unbelievable.’ 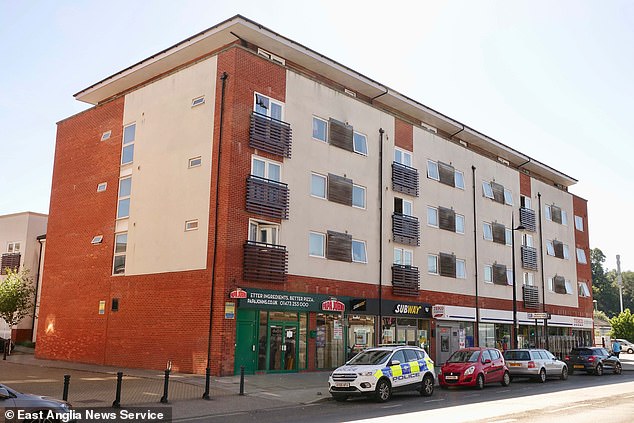 Officers remained on the scene in Ipswich this morning, guarding the corridor outside the flat

Another neighbour said: ‘The flat is the home of quite a young woman. I don’t think she worked. It is a terrible thing to happen on your doorstep. There was a real commotion in the night when the man fell.’

And a third added: ‘The police have been knocking on everyone’s doors. I slept through the whole thing so I couldn’t help them. The officer I spoke to was unable to tell me anything about the circumstances.’

A Suffolk Police spokesman said: ‘Police can confirm that a man has died following an incident at a flat in Ipswich.

‘Officers were called just after 2.35am on Wednesday to reports that a man had fallen from the third-floor balcony of a premises in Duke Street.

‘The man, aged in 60s, was declared deceased at the scene by ambulance personnel. Police have carried out enquiries to identify the family of the deceased who have now been informed.’

The police statement added: ‘Detectives have been continuing with their efforts to establish the facts of what took place in the moments prior to Mr Henderson’s death.

‘This has included forensic work, along with extensive house-to-house and CCTV enquires.’

Any witnesses or anyone with information about this incident is asked to contact Suffolk Police’s South CID at Landmark House, quoting reference 34924/20