A desperate father has been pleading with his ex wife to not ‘chemically castrate’ their son after she moved to California from Texas.

Jeff Younger, of Texas, revealed a video of his child, James, nine, claiming he’s a girl on Tucker Carlson Tonight. When asked if he was a boy, James told his dad in the video: ‘No, I’m a girl.’

In the video, which is several years old, the young boy claimed his mother, who is a pediatrician, told him he was female because he ‘loved girls’ and would dress him up in ‘dresses.’

Younger claims his ex-wife, Dr. Anne Georgulas, planned to ‘chemically castrate’ their son by the age of nine, his current age. He claims she moved to California to seek gender treatment for their son.

A court has previously ruled Georgulas cannot seek ‘transitioning’ treatment of their son and she has ‘freely acknowledged’ the order. The Supreme Court of Texas ruled in December that she ‘lacks the legal authority to consent to such therapy’. 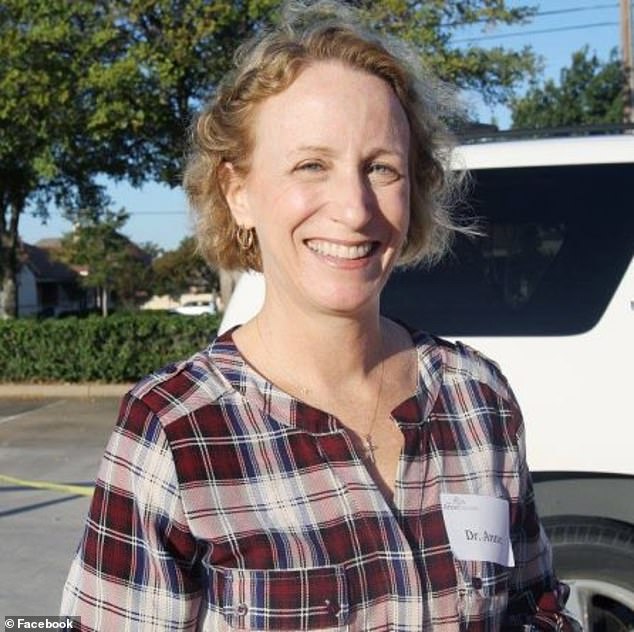 His ex-wife Dr. Anne Georgulas (pictured) claimed three doctors confirmed James had gender dysphoria and has long argued that James is transgender and wanted her child to transition to a girl named Luna 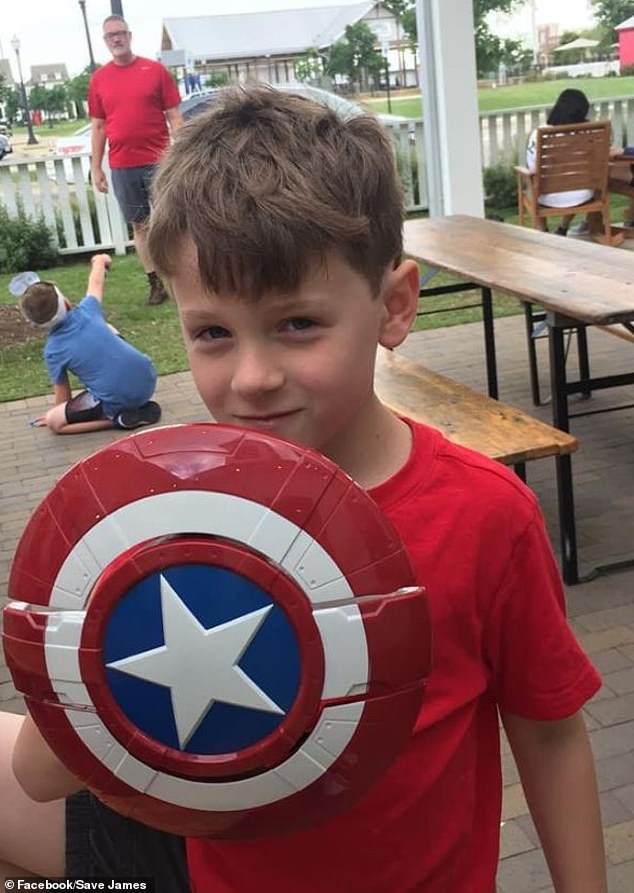 Chemical castration refers to the use of chemicals or drugs to stop sex hormone production. Medications commonly known as ‘puberty blockers’ are increasingly used on minors with gender dysphoria, and there is no federal age limit on who can be prescribed them.

‘My blood ran cold when I realized what she had planned for that boy,’ Younger told Carlson.

Younger said doesn’t think the mother’s relocation to California is ‘an accident’.

In 2019, Younger was granted joint custody of their children, which included a say in medical decisions related to the child, including treatment regarding gender transition.

In 2021, a judge gave Georgulas full custody over James, including his medical care. But that ruling said the control did not extend to extend to hormone-suppression therapy, puberty blockers, or transgender reassignment surgery. Permission for any of those treatments must also be obtained from the boy’s father, the ruling said.

The ruling noted that full custody was given to the mother in part because Younger ‘failed to timely make the payments of child support, medical support and interest as ordered and only paid his past due support after the motion for enforcement was filed’. 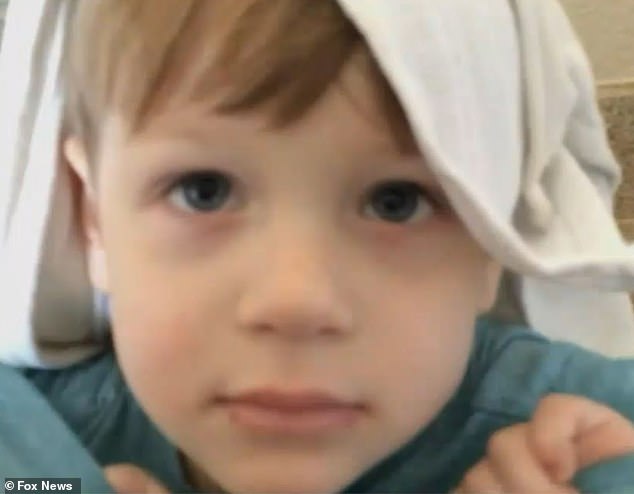 In a video filmed by Younger, the young boy claimed his mother told him he was female because he ‘loved girls’ and would dress him up in ‘dresses’ 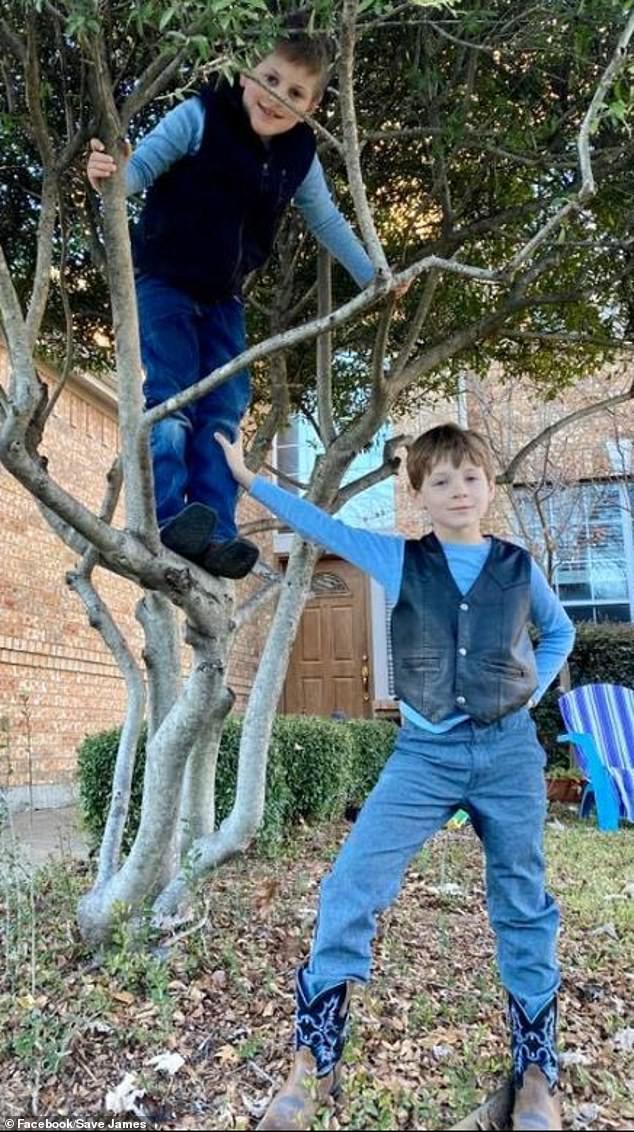 An attorney for Georgulas has said the case is ‘not about the child’s gender issues’ and said there were ‘issues with regards to Jeff’s parenting abilities’.

Younger recently asked the Texas Supreme Court to ban the mother from relocating to California over fears she would be table to take advantage of the new sanctuary law, but judges threw out his claim.

The Texas Supreme Court said: ‘Under an existing Texas court order that Mother agreed to and that Mother acknowledges is binding on her, Mother lacks the legal right to consent to gender-transition therapy for her son.

‘This legal disability is just as real in California as it is in Texas, and Mother readily acknowledges this as well.’

It added that the court order in Texas which would prevent Georgulas from getting gender-transition therapy for her son without Younger’s permission remain in effect nationwide.

The court said: ‘The only court to have acted so far has preserved Father’s right to withhold consent to gender-transition therapy for his son. That right is enforceable in California, where Mother lacks the legal authority to consent to such therapy for the child, both before and after SB 107 [the sanctuary law].’

California’s sanctuary law protects transgender children and their families who flee from ‘Alabama, Texas, Idaho or any other state criminalizing the parents of trans kids for allowing them to receive gender-affirming care’.

‘If these parents and their kids come to California, the legislation will help protect them from having their kids taken away from them or from being criminally prosecuted for supporting their trans kids’ access to healthcare,’ State Senator Scott Weiner said in a statement.

The sanctuary law went into effect on January 1, 2023. 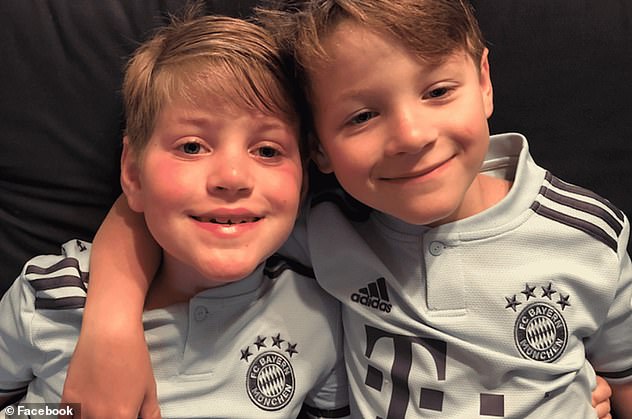 ‘My blood ran cold when I realized what she had planned for that boy,’ Younger said. He claimed his wife divorced him and moved to California to chemically castrate their son without his permission 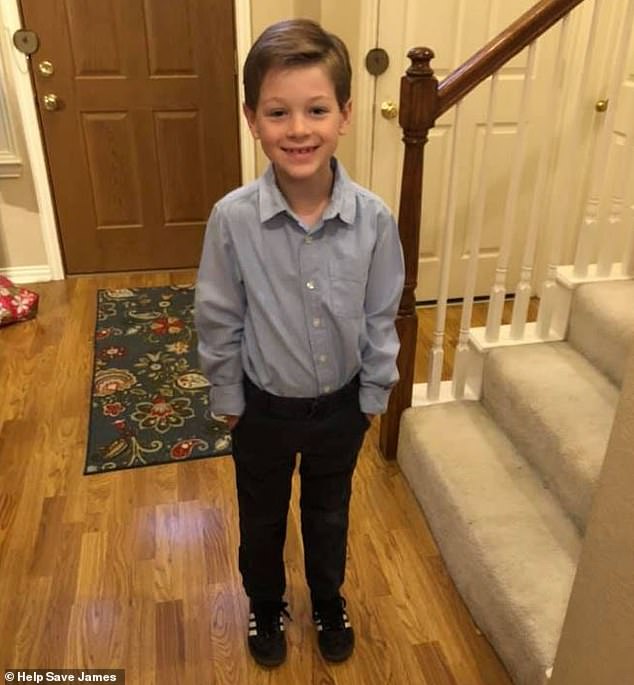 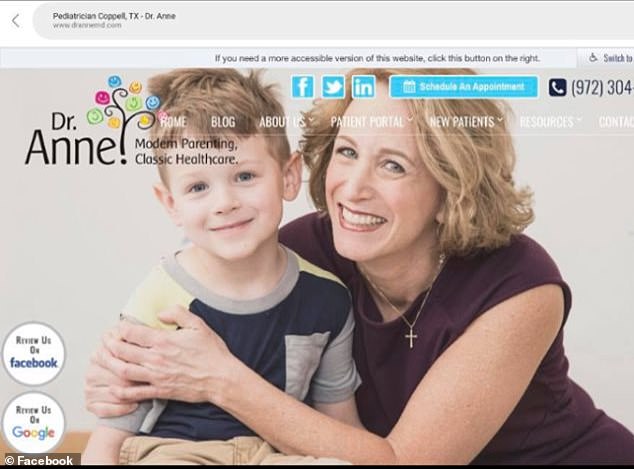 Dr. Anne Georgulas, who is a pediatrician, has argued that James is transgender and should be able to wear dresses and attend school as a girl named Luna

Younger also claimed the child’s school district ‘tried to secretly transition’ James and forced the father to dress his son in girl’s clothes.

‘I’d bring my son to school in boy’s clothes and they’d give him a dress and make him use the girls’ restroom,’ the father-of-two claimed on Carlson’s show.

Georgulas had the boy registered in school as a girl, according to Younger.

Georgulas, who is a pediatrician, had long argued that James is transgender and wanted her child to transition to a girl named Luna.

Her ex-husband, however, did not believe James has gender dysphoria and that his child was just experiencing some confusion with gender.

He accused Georgulas of forcing James to socially transition into a girl by making the child wear dresses. However, she claimed three mental health professionals had diagnosed James with gender dysphoria and that therapists had recommended they start using the name Luna instead of James.

Georgulas and Younger married back in 2010 when they were members of the Orthodox Church.

They went through IVF to have twins and requested their gender be male before they were born in 2012.

The couple’s marriage was annulled several years ago over claims Younger had lied to Georgulas about a previous marriage and his employment.

Arguments over their child’s gender began when Georgulas took James to see a gender therapist at the Children’s Hospital Center.

She claims she had noticed James requesting girl-themed toys, that the child was imitating female Disney characters and had been asking to wear dresses.

The therapist recommended James start social transitioning by wearing dresses to school and going by the name Luna.

ARE PUBERTY BLOCKING DRUGS THE SAME AS CHEMICAL CASTRATION

The process is sometimes referred to as the hormone therapy or medical castration.

In some states, it is used as a punishment for sex criminals because the combination of drugs reduce a person’s sex drive and drop their production of semen.

But there are medical uses for it as well. It can help treat prostate cancer in men and breast cancer in women – which are both fueled by the overproduction of sex hormones.

In recent years, the practice has been used on children and teens suffering from gender dysphoria. When used in this way, they are often referred to as ‘puberty blockers’.

They work the same way in both cases, shutting down the natural production of testosterone and estrogen in the body.

Advocates for the treatment say it stalls the sexual development of young children and gives them a chance to decide what gender they are.

GnRH drugs stop the pituitary gland in the brain from signaling the testicles to produce testosterone. This can significantly reduce, or outright stop, the production of testosterone over time.

Drugs such as Goserelin (sold under the brand name Zoladex), Histrelin (Vantas) and Leuoprolide (Lupron) are all drugs approved by regulators to treat prostate cancer but have become popular off-label tools for transitioning transgender women.

Antiandrogen treatments prevent the creation of androgen hormones in the body. These chemicals are responsible for the development of male sex characteristics like a deep voice, hairy legs and other during puberty and throughout a man’s life.

In cancer treatment, the drugs prevent these hormones from binding with malignant cells – and help shrink and slow any malignant growth.

Flutamide and Nilutamide (Nilandron) are both antiandrogens developed to treat prostate cancer, but have since become popular tools for gender affirming care among transgender women – as it lessens the strength of their male sex characteristics.

In some rare cases, doctors may also perform chemical castration on females suffering from breast cancer.

Pills such as Fareston – which is a combination of the drugs tamoxifen and toremifine – reduce estrogen production in the body.

The drugs used in chemical castration reduce the secretion of hormones. While they can help treat cancers – they also lower a person’s sex drive.

They can also change traits like depth of voice, hair growth around the body and growth of breasts in men. If used by a still-developing body can prevent changes the body undergoes during puberty.

Because of this, the same drugs are also used by transgender people to combat gender dysphoria – especially by children and teens hoping to stave off puberty.

The effects of chemical castration are not permanent, but it takes a year for the body to return to previous hormone secretion levels after coming off of the drugs.

Use of these drugs in children is relatively new, though, so it is unclear if they cause long-term harm to their development.

Chemical castration as a punishment is legal in nine US states, including Alabama, California, Florida, Iowa, Georgia, Louisiana, Montana, Oregon, Texas and Wisconsin.

In California, anyone that commits a sex crime where the victim is under 13 years old will be subject to the treatment. In the other states, sex offenders can be sentenced to the treatment as punishment.