Is this DeSantis’ vision for an anti-nanny state America? Republican presidential favorite proposes PERMANENT ban on mask and vaccine mandates in Florida as part of new ‘common-sense’ bill

Florida Gov. Ron DeSantis, an expected Republican contender for President in 2024, touted legislation that would permanently ban all mask and vaccine mandates – the latest example of his anti-woke vision for America.

The so-called ‘common sense’ proposal will attempt to make permanent a series of measures passed in November 2021 prohibiting private and public employer-issued vaccine mandates and instituting a ban on mask mandates in schools.

Gov DeSantis said it would liberate Florida from the ‘biomedical security state’.

The Florida Republican, an anti-wokeness crusader widely expected to run for the 2024 presidential nomination, has positioned himself as a staunch opponent of government-sanctioned Covid rules.

This is the latest instance of Gov DeSantis professing himself a Covid guidance contrarian, having announced last month that he plans to petition the state’s Supreme Court to convene a grand jury to investigate how the shots were rolled out and marketed.

Gov DeSantis told an enthusiastic public in Panama City Beach Tuesday: ‘This is just nuts that we’re still doing this… We need to be leading on this by making all of these protections permanent in Florida statute as we need to do in the upcoming legislative session.’

DeSantis went on: ‘We also believe that being able to live your life and being able to breathe the fresh air is something that should basically be a civil right. You should not have to have any of these mask requirements imposed on you.’

The 2021 rules banning mandates are set to expire in July, but the legislature is seeking to beat that deadline. Under the rules, employees can choose to opt for periodic testing or PPE as an exemption to a vaccine mandate, and employers are compelled to cover the costs of testing and PPE exemptions for employees. 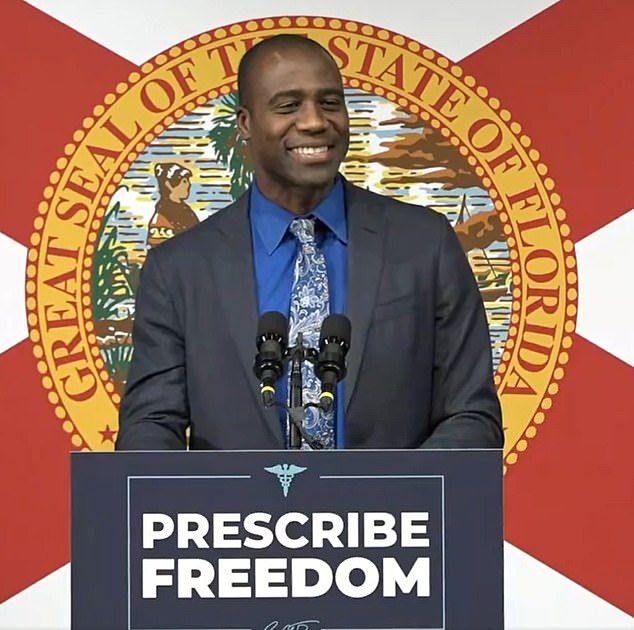 Surgeon General Joseph Ladapo, a vocal skeptic of Covid vaccines, repeated his claim that masks are not effective in preventing the spread of Covid and denounced the vaccines

They also levied hefty penalties for companies that violated the bans. Small businesses of 99 employees or fewer face a fine of $10,000 per employee violation, while larger employers face a fine of $50,000 per violation. These penalties would be set in stone with the passage of this legislation.

‘It’s insane, it’s irrational, and so no discrimination on this vax status, no requirements of masking in leiu of vax or any other reason, those are really, really important.

‘Sometimes you just have to say enough is enough, and you think it’d be enough but you still see it all over this country,’ Gov DeSantis told the crowd.’

Gov DeSantis was joined by another figure who has risen to prominence for his vaccine and masking skepticism: state Surgeon General Joseph Ladapo.

Dr Ladapo decried the widespread use of mRNA technology, which he argues is untested and unsafe: ‘You’re telling people to put it in children, and you’ve never even shown the children to gain from it in terms of an actual help. That’s the land of crazy. Florida is the land of sanity.’

The mRNA vaccines have been proven safe and highly effective at preventing severe illness. State House Democratic Leader Fentrice Driskell of Tampa slammed Gov DeSantis’ administration for spreading disinformation about the vaccines, which he strongly and vocally advocated for throughout 2021.

Ms Driskell said: ‘Ron DeSantis, what we witness today, he’s become the number one peddler of a dangerous message from the anti-vax establishment. It’s a fake ideology with real consequences. 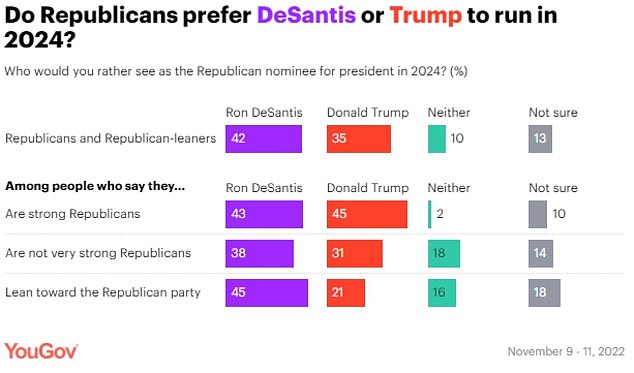 ‘Masks work, the CDC has proven that. The mRNA vaccines work. No one ever promised total immunity, but those vaccines do lessen the chance of infection and they increase the likelihood of a milder case if you do get sick.’

DeSantis has been painted a 2024 Presidential favorite. A YouGov poll of 413 Republicans and Republican-leaning independents revealed that DeSantis overtook former President Trump to be the party’s nominee two years from now 42 to 35 percent.