The governor of Florida has been spotted for the first time in two weeks after caring for his cancer-stricken wife.

DeSantis, who has been attacked by Democrats for being absent while his state struggled with a COVID surge, attended a Miami faith event on New Year’s Eve with his wife Casey who is battling cancer.

He received the Defender of Freedom award at “Let Us Worship” in Miami. In Florida, we will protect the right to worship and won’t let anyone shut you down.

posed for a selfie with a fan on New Year’s Eve at the Orange Bowl game – the annual college football match, played at the Hard Rock Stadium in Miami.

A Michigan man tweeted an image of himself with DeSantis, captioned it: ‘At the Hard Rock Stadium watching the Michigan game with my brother and Ron DeSantis is in our suite!!! He’s got our votes!!!’

The 43-year-old was also scheduled to make a public appearance, his spokesman said.

It will be the first time he has been seen in public since December 19, when he appeared on Fox News. His last live appearance was December 17, when he held a press conference.

In the intervening 12 days since his Fox appearance, COVID cases in his state have soared, with records being broken for positivity. 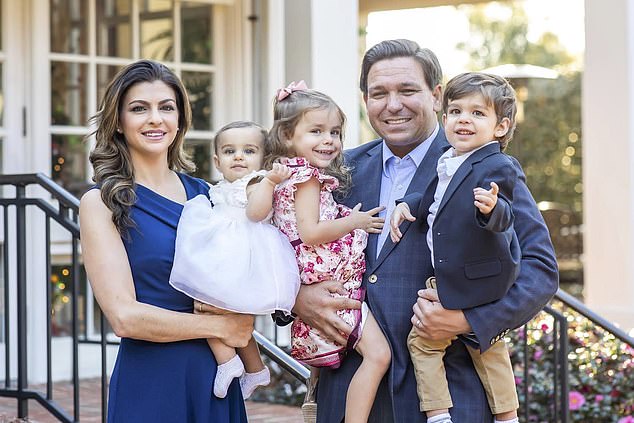 The Centers for Disease Control and Prevention (CDC) on Friday reported more than 75,900 new cases in Florida.

That tally raises the seven-day average daily to 42,600, which is twice as high as it was at the peak of this summer’s surge.

Friday’s report marks a single-day record for the number of new cases in Florida. It breaks the record set a day earlier when more than 58,000 cases were reported in the state.

DeSantis’s absence had been noted by his critics, who failed to note that on October 4 his wife Casey, 41, the mother of their three young children, announced her breast cancer diagnosis.

DeSantis’s spokesman on Friday said his absence was due to his caring for her, following a December 19 doctor’s appointment that he attended with her.

It was unclear why it took DeSantis’s spokesman so long to clear up the mounting questions.

‘Seriously, where is Ron Desantis? It’s genuinely concerning and odd. Florida is clearly in crisis, which mainly at this point is a leadership crisis,’ MSNBC host Joy Reid tweeted, pictured 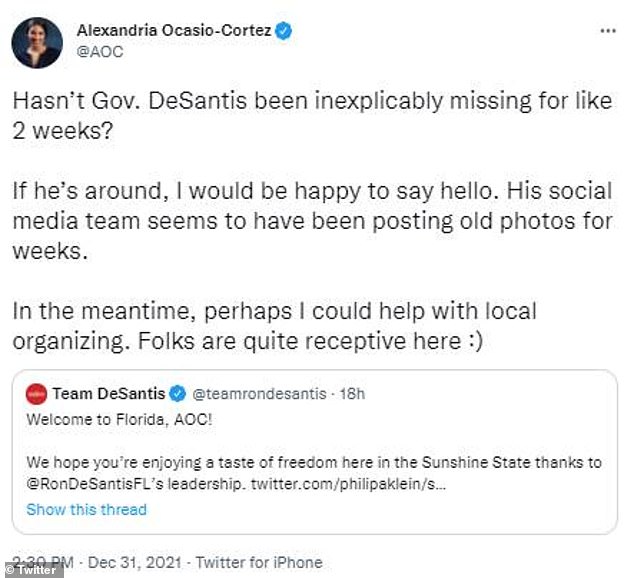 ‘Hasn’t Gov. DeSantis been inexplicably missing for like 2 weeks? If he’s around, I would be happy to say hello,’ Ocasio Cortez tweeted, pictured above 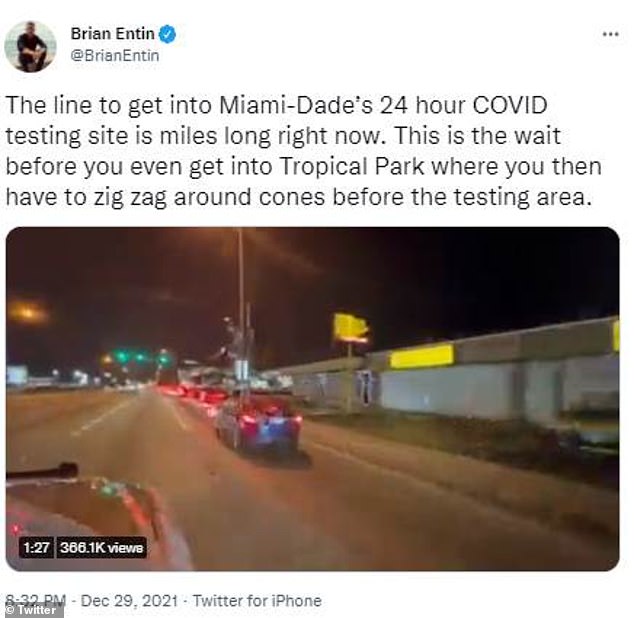 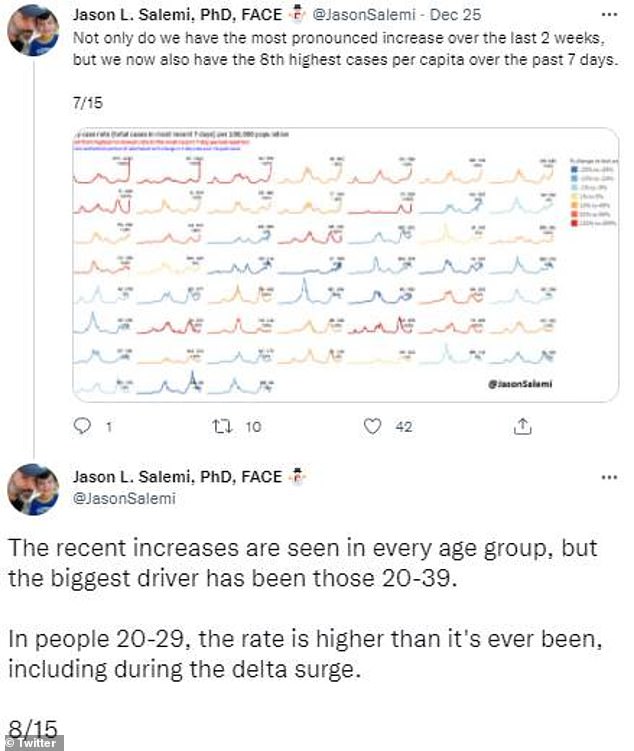 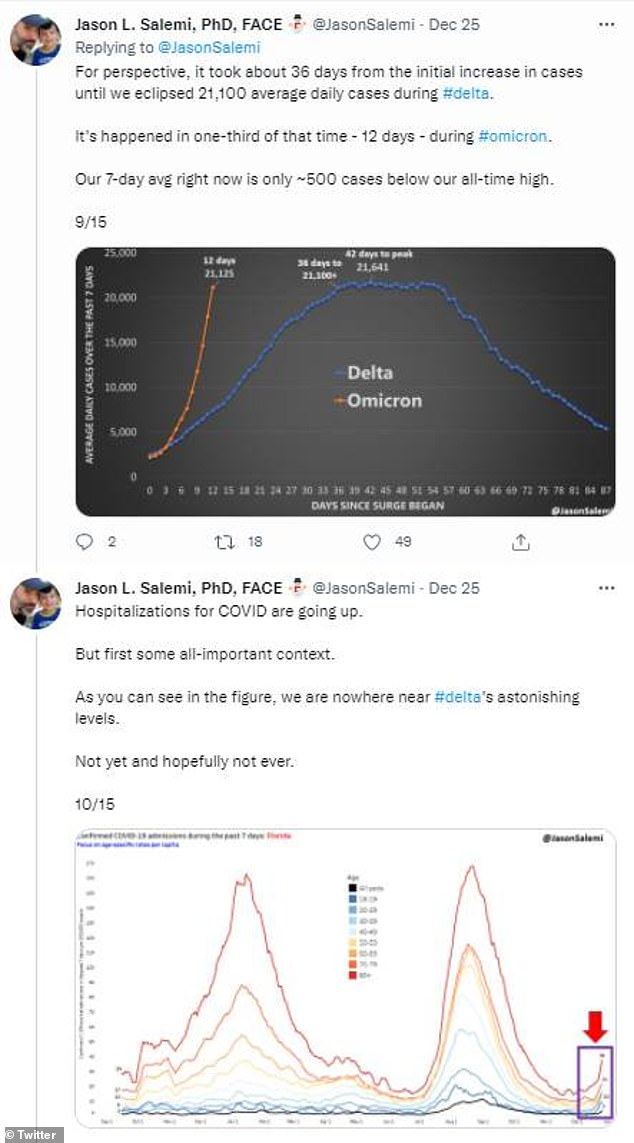 The criticism of DeSantis for his absence has been strong.

‘Hasn’t Gov. DeSantis been inexplicably missing for like 2 weeks? If he’s around, I would be happy to say hello,’ Ocasio Cortez tweeted on December 30.

‘His social media team seems to have been posting old photos for weeks.’

‘In the meantime, perhaps I could help with local organizing. Folks are quite receptive here :)’

‘Seriously, where is Ron DeSantis? It’s genuinely concerning and odd,’ she said.

‘Florida is clearly in crisis, which mainly at this point is a leadership crisis.

‘Would he pop back up to sue if the Biden administration were to send in federal testing and vaccine help?’

Reid added: ‘A governor, not governing during a crisis; and sunning his belly on vacation instead.’

Jerry Demings, Democratic mayor of Orange County in Florida, also took issue with DeSantis at a press conference on Tuesday.

Demings said all residents of the Sunshine State should be ‘outraged,’ while asking the whereabouts of their governor.

‘Our residents, all Florida residents should be outraged, and they should ask the question, ‘Now, where’s our state? Where’s our governor?” Demings said.

‘Where is Ron DeSantis now? When was the last time you saw the governor do a press briefing regarding COVID-19?’ 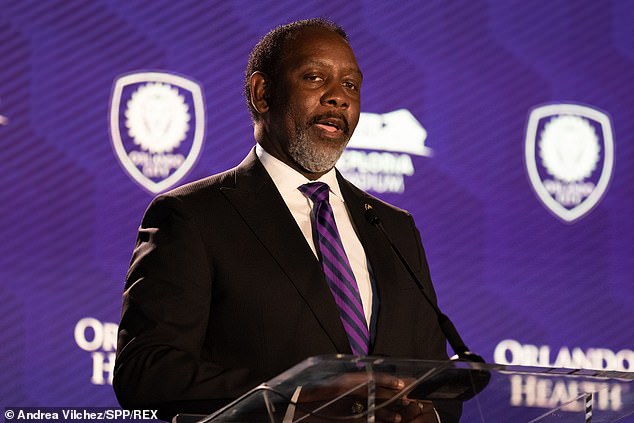 Orange County Mayor Jerry Demings, pictured, said on Tuesday that Floridians should all be demanding to see their governor get a handle on the COVID crisis 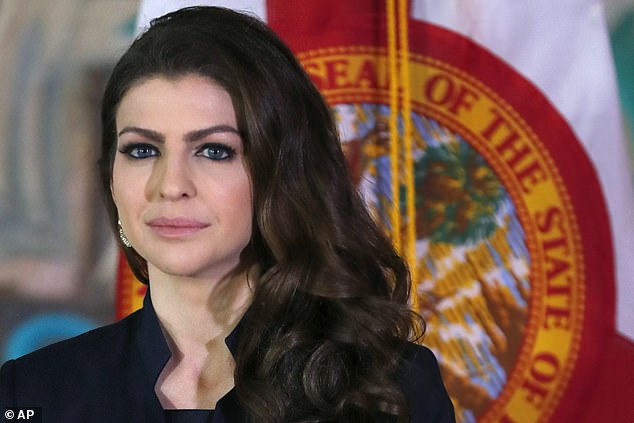 DeSantis’ wife, Casey, pictured, announced her breast cancer diagnosis in October. She had treatment, with her husband by her side, on December 19

DeSantis communications staffer Kyle Lamb came to the defense of his boss on Twitter against those who were questioning whether the governor was on vacation, tweet pictured above

Kyle Lamb, who works for DeSantis as a communication director, came to the defense of his boss on Twitter.

‘Just FYI, [DeSantis] is not on vacation. Literally no one from our office has said that he is,’ Lamb wrote.

‘Anyone pushing that could have easily seen the public schedule and seen that he’s taking calls and meetings this past week.

‘Not having public events does not=”vacation.”‘