Des Hasler had little time for niceties as he watched his Manly side put up a brave fight in their 40-22 loss against South Sydney on Friday night.

The 61-year-old reacted angrily as a fan blew a kiss towards the coaches box after the Rabbitohs scored their second try of the game to take a 12-10 lead late in the first half.

Footage posted on Twitter shows a supporter standing up right in front of the coaches box, before turning towards Hasler and blowing the Sea Eagles coach a kiss. 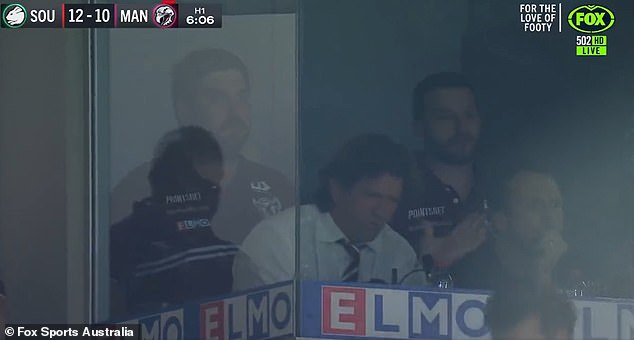 The two-time premiership winner was visibly annoyed and gestured towards the fan as if he was swatting away a fly.

Hasler will have been far more impressed with his team’s display, as Manly stood tall against the Rabbithos, despite playing 71 minutes with 12 men following Karl Lawton’s sending off.

Lawton was marched after just eight minutes when a tackle on Rabbitohs captain Cameron Murray went horribly wrong before the Sea Eagles succumbed 40-22 in Gosford.

Defending his own line, Lawton wrapped his arms around the waist of the Souths lock, only for momentum to send Murray hurtling head first into the turf. 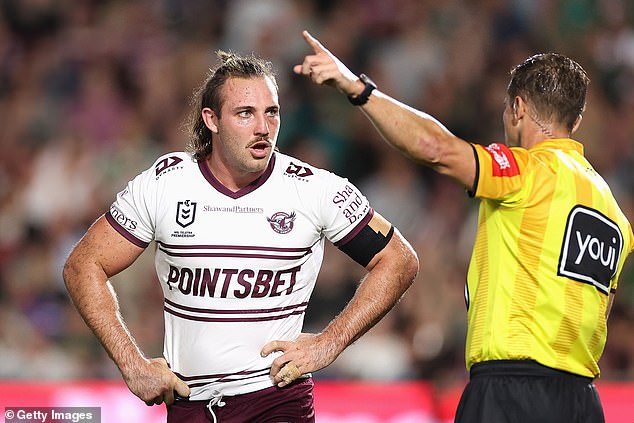 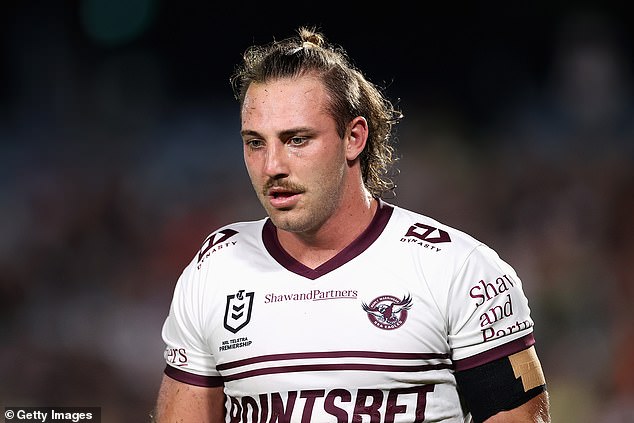 There was no hand between the legs, but it took referee Grant Atkins and the bunker around just a minute to send him from the field.

‘He’s such a hard worker and plays the game at that pace. There was certainly no malice in the tackle.

‘At the same time, there will be some sort of consequences to face with that tackle. 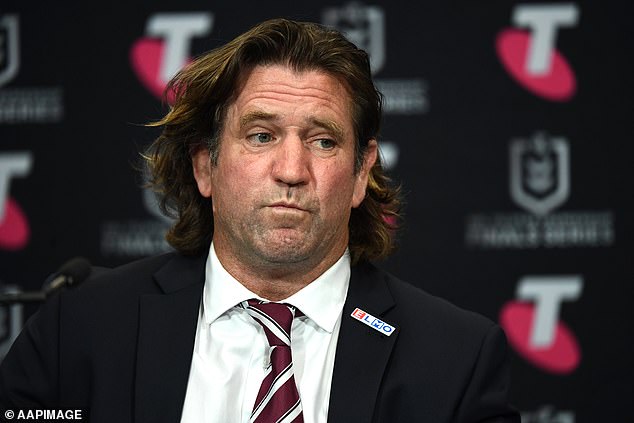 ‘Would you send him off or sin-bin him? I thought maybe a decision could have been disputed there.

‘Either way, he wasn’t going to stay on the field.’

Lawton joined Canberra star Nick Cotric in becoming the only players to be dismissed for a dangerous throw during the 25-season NRL era. 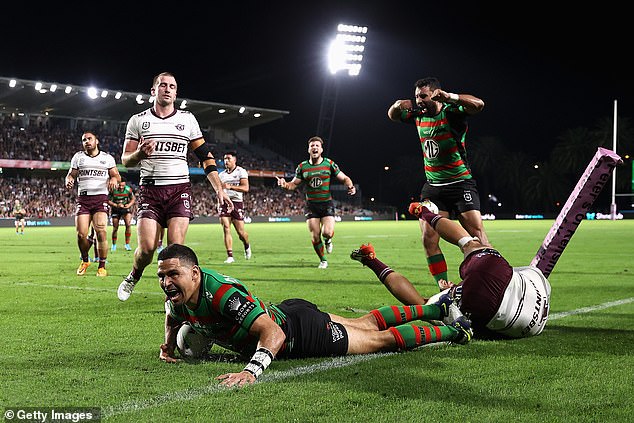 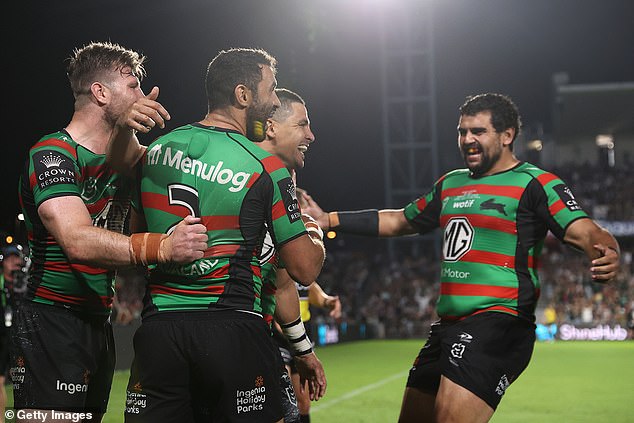 Despite playing 13 vs 12 for 71 minutes, South Sydney were made to sweat against Manly 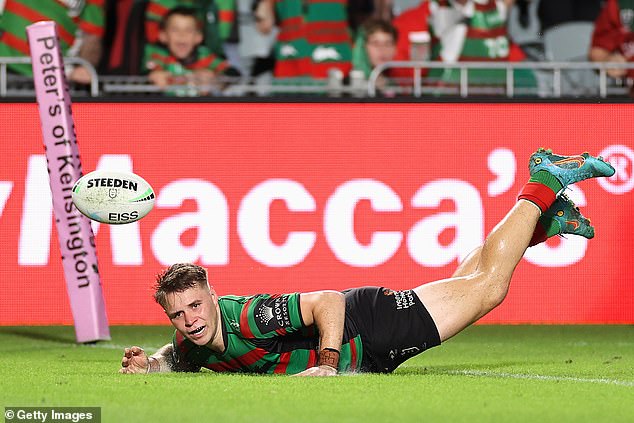 ‘It was one of those things that happened. It was a really dangerous tackle.

‘And Cam is really lucky he rolled. If he tried to straighten, he would have been in a lot of trouble.

‘If it was one of my players, I would have seen it as fair.’

Murray, meanwhile, admitted he was lucky to walk away without an injury. 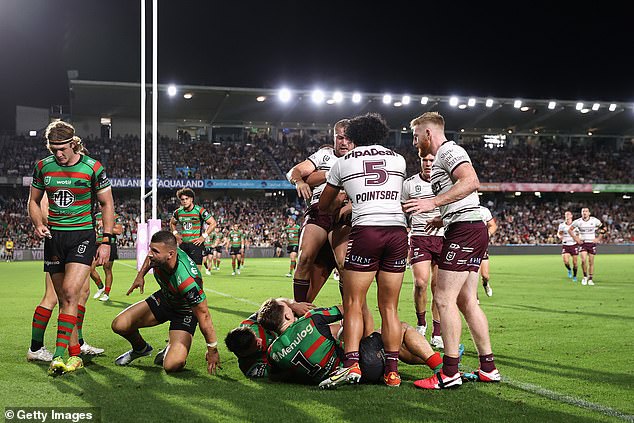 ‘I don’t think it was deliberate and it probably looked a little worse than it was,’ he said.

‘I was probably lucky I didn’t come off too banged up.’

But despite spending 72 minutes with just 12 men, and losing Brad Parker to a twisted knee, Manly somehow stayed in the fight and threatened to become the first team since they did it themselves in 2008 to win while down a man from the first half. 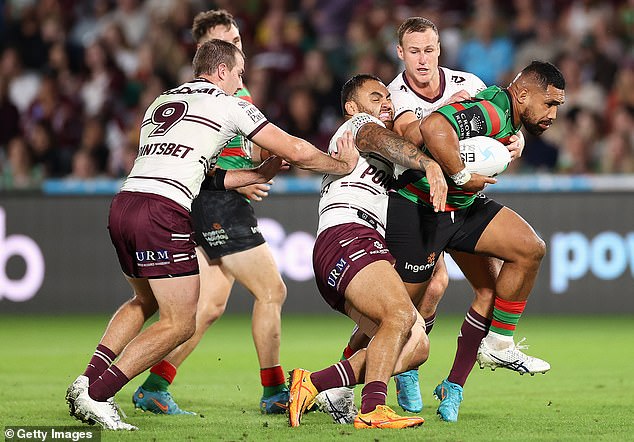 They shot out to a 10-2 lead in the 13 minutes after Lawton was sent from the field, and also refused to go away when trailing 30-16 early in the second half.

Daly Cherry-Evans, in particular, kicked brilliantly to keep the Sea Eagles in it, while Josh Schuster was back to his dangerous best in his first game back from an ankle injury.

Kieran Foran also scored a try and set up another as he and Reuben Garrick battled injuries while Manly hung in the match in what looks like their last without Tom Trbojevic. 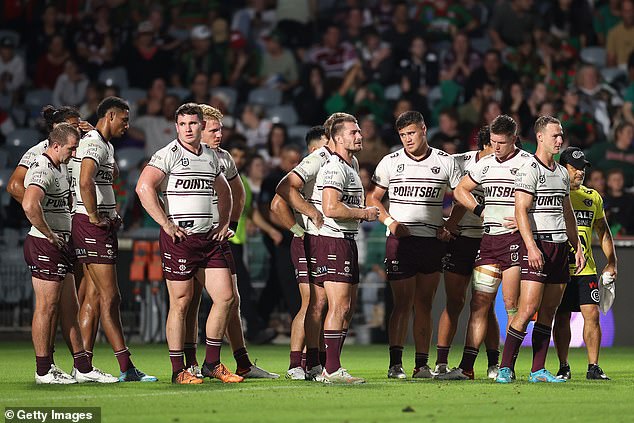 But ultimately the fatigue told, their defence buckled, and the likes of Cody Walker were too dominant.

Playing in his 150th game, Walker bagged one try himself when rookie Isaiah Tass got a ball out the back for him after halftime.

The pair had earlier also combined for a try just on the halftime siren, while Alex Johnston also claimed one on the dangerous left edge when he double-stepped opposite number Jason Saab.

Tom Burgess and Murray also scooped second-half tries through Manly’s tired middle, while Blake Taaffe crossed for his first of the year on the siren to put the Rabbitohs in the top eight.