It’s had audiences at home on the edge of their seats this week, and the final episode of Des left viewers in tears as they watched a brave victim testifying in court.

The gripping three-part drama followed the crimes of one of Britain’s most notorious serial killers, Dennis Nilsen, who is thought to have slaughtered as many as 15 gay men, most of them homeless, at his flats in Cricklewood and Muswell Hill, north London, between 1978 and 1983.

In tonight’s conclusion, Nilsen (played by Doctor Who star David Tennant) insisted he wasn’t ‘mad’ before admitting that he would’ve killed ‘115 not 15’ people if he hadn’t have been caught.

The episode also saw one of the two men who managed to escape Nilsen’s clutches – Carl David Stottor, a drag artist who changed his identity after the attack and is believed to have recently died  – dragged to the trial to give a witness statement before homophobic abuse was hurled at him by crowds outside the courts.

In a gripping conclusion to the three-part drama, Dennis Nilsen was sentenced for the deaths of several gay men who he lured to his home during the late 70s and early 80s. Viewers said they had ‘shivers’ when Nilsen said he would have killed more people if he had not been caught

His brush with death during his two-day nightmare with Nilsen, who died in prison on 12 May 2018 at the age of 72, 34 years into his life sentence, was recounted in tonight’s programme.

Viewers were mesmerised by Stottor’s bravery and took to social media to express their admiration for his actions.

One viewer wrote: ‘What a brave man for facing up to the evil man.’

Another said: ‘No victim should be in the same room if they are suffering. They should give their evidence in writing back then. 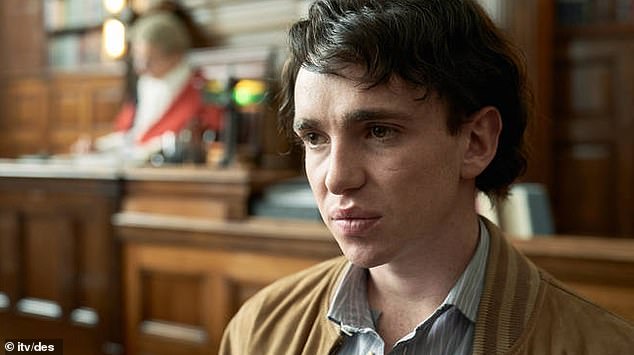 Carl David Stottor, a drag artist who changed his identity after the attack and is believed to have recently died –  portrayed by actor Laurie Kynaston – was dragged to the trial to give a witness statement before homophobic abuse was hurled at him by crowds outside the courts

‘This poor victim. Everything about this is tragic.’

A third added: ‘Carl Stottor is one of the bravest men. I’ve watched a few interviews and his experience and trauma is heartbreaking.’

The start of the episode saw Nilsen and his team of lawyers try to get his sentence reduced by suggesting the serial killer was not guilty of murder, but instead manslaughter by way of diminished responsibility.

Claiming Nilsen was of abnormal mind and not of rational thought, the trial appeared to be going in the murderer’s favour – thanks to the lack of evidence for motive or intent – until Carl (played by Laurie Kynaston) was called to court.

Viewers took to Twitter to express their admiration and sympathy for former drag artist Carl Stottor, who stood up in court to give his testimony after his experiences with Dennis Nilsen

Ahead of his appearance on the witness stand, Carl was visited by Detective Inspector Peter Jay (played by Line of Duty star Daniel Mays) who asked him to help with the trial.

‘Listen Carl, the trial isn’t going how we’d hoped,’ Mr Jay said. ‘Your testimony could be crucial… we need you to give it in court.’

But a terrified Carl insisted he was told his statement would be enough and refused to enter the courtroom, explaining: ‘No, I can’t. He killed me, Mr Jay, and then he brought me back to life.’

The officer pleaded: ‘I can’t imagine what you’ve gone through Carl, I really can’t. But please believe me, if he gets a lesser sentence, you’ll find no peace.’

The man who ESCAPED Dennis Nilsen: Drag artist Carl Stottor’s life was spared by the serial killer but the horrific encounter left him suicidal, forced to change his identity and feeling anything but ‘lucky’ for surviving

A dozen young men met their death at the hands of serial killer and necrophile Dennis Nilsen in the late Seventies and early Eighties – but two managed to dramatically escape his clutches.

One of them, Carl David Stottor, a drag artist, who changed his identity after the attack and is believed to have recently died, was just 21 when he agreed to go back to Nilsen’s flat in North London in 1982 – but the terrifying encounter that ensued dominated his adult life.

His brush with death during his two-day nightmare with Nilsen, who died in prison on 12 May 2018 at the age of 72, is recounted in Des, a new ITV drama about the murders written by Luke Neal.

Another victim, Andrew Ho, also survived the serial killer’s clutches but later decided not to press charges against him. 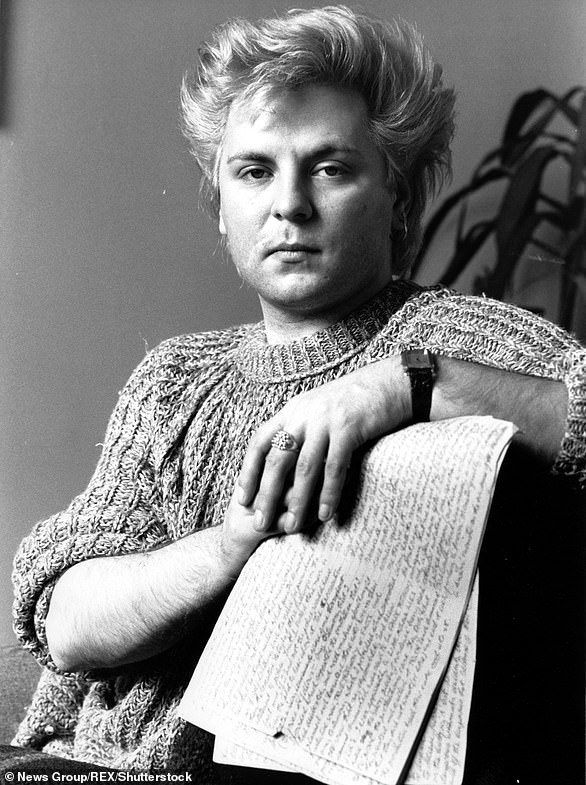 Carl David Stottor, pictured in 1989, seven years after serial killer Dennis Nilsen tried to strangle and drown him at his North London flat with a letter written by Nilsen to him from his prison cell. Stottor, who changed his identity after the attack and is believed to have recently died, once said ‘what he did will stay with me forever’

After meeting Nilsen at the Black Cap pub in Camden, Stottor agreed to go home with him but awoke next to Nilsen to find himself being strangled with the zip on the sleeping bag he was in. After a struggle, the serial killer attempted to drown him in a cold bath, but the young man awoke hours later with serious injuries.

He survived only because Nilsen had an apparent change of heart, after seeing a flicker of life still within him, and decided to spare him. Stottor fled the flat and headed to a nearby hospital where he was treated.

The crime clearly had a dramatic impact on Stottor’s life – he spent much of it living under a pseudonym and in 2009, he told Bizarre magazine: ‘I don’t feel lucky, what he did will stay with me forever’.

Speaking in another interview, Stottor said he’d lost a boyfriend to suicide ‘because he found it so hard to deal with. I’ve moved all over the place trying to find somewhere I feel better.

He added: ‘If it was possible for me to have a gun and kill a single human being, I would shoot Nilsen and then myself.’

Explaining why he felt compelled to change his name, he said during the interview with the now defunct magazine ‘Carl Stottor died at Dennis Nilsen’s home that night’.

Nine years ago, Stottor vented his anger at Nilsen’s winning of £55,000 to take his case to the European Court of Human Rights in a bid to seek permission to write a tell-all book about his crimes.

Stottor said: ‘Why should he have his human rights when his victims haven’t any? It’s not justice. This happened to be 29 years ago and I never forgot it.’

But Carl was determined, replying: ‘I can’t be in the same room as him. I can’t go back there,’ until he is told that he’ll be forced to testify by the judge, anyway.

During the trial, the defence lawyer tried to diminish Carl’s trauma by suggesting he was well-cared-for after the attack.

‘In fact, besides from the incidence itself, did [Nilsen] not show you more care and kindness that evening than anyone else in your life had done for a very long time?’ the lawyer asked.

An emotional Carl responded: ‘Yes, that’s what I can’t understand. Is he my murderer or my saviour?’ After leaving the courtroom, homophobic slurs were hurled at a crying Carl. 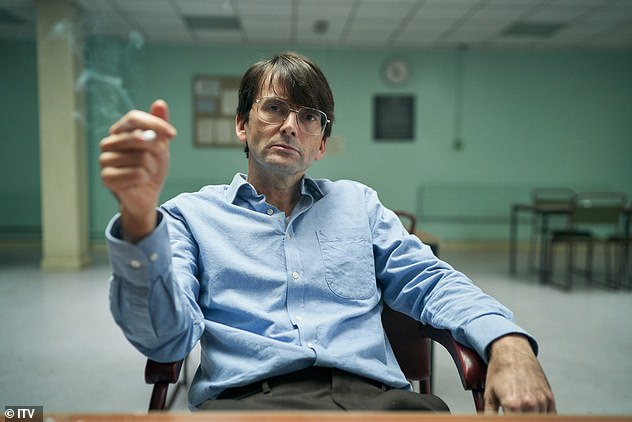 During his killing spree, Nilsen would befriend his subjects in pubs and bars in London before luring them into his flat, where he would murder them and sit with their corpses before dismembering them. Pictured: David Tennant playing Nilsen

Eventually, the judge allowed for a majority verdict to be called, with the jury finding Nilsen guilty of murder and attempted murder.

When being directed to his cell, Nilsen had one last word with the police officer: ‘My Jay, well done. Went down to the wire in the end didn’t it. Must be pleased it’s over.’

The officer didn’t reply and instead insisted: ‘If at any time in the future you remember anymore names, please write to me,’ to which the serial killer responds: ‘I promise you, you’ll be the first to know.’

Shockingly, Nilsen then admitted: ‘I think the jury got it right in the end, I don’t think I’m mad. If you hadn’t caught me that day, it’d be a 115 not 15, I could never of stopped.’

During his killing spree, Nilsen would befriend his victims in clubs and bars in London before luring them into his flat, where he would murder them and sit with their corpses before dismembering them.

His crimes were discovered when a drain outside his home on Cranley Gardens, Muswell Hill, became blocked by human remains that he had tried to flush away.

Nilsen was jailed for life with a recommendation he serve a minimum of 25 years in 1983, on six counts of murder and two of attempted murder. The sentence was later upgraded to a whole-life tariff.

Dennis Nilsen killed at least 15 men over a period of six years in London in the late 1970s and early 1980s.

Most of his victims were homosexual or homeless men who he would pick up in bars across London or on the street.

After inviting them to his home, Nilsen would ply his victims with food and alcohol before killing then. His preferred method was strangulation.

Once dead, he dismembered their bodies by dissecting them in his house. In his first address, Melrose Avenue, he buried their remains in the garden. In Cranley Gardens however he was forced to take other measures.

Once arrested he told police how he boiled the heads of his victims in a large cooking pot to dispose of their brains.

Nilsen (right), with a prison warden at his side, after he was sentenced to a minimum of 25 years imprisonment after being convicted of six murders and two attempted murders at the Old Bailey

He would cut up the rest of their bodies and store them in plastic bin bags at the property. When the stench of their rotting corpses became stronger, he tried to flush their limbs down the toilet and drains.

This caused a large blockage in the pipes. Seemingly oblivious to risk, Nilsen audaciously complained to a waste company about the blockage and asked for it to be resolved because he and other residents were suffering as a result.

When a worker Dyno-Rod arrived at the property in 1983 to unblock them, he discovered what appeared to be flesh and fragments of bone when he opened a drain cover outside the property.

The following day, after inspecting another section of pipe, he and his supervisor discovered what they thought were bones of a human hand.

They alerted police who arrested Nilsen as he returned home from work. While in custody he admitted to killing at least 15 people.