A fire ripped through an infant school building in the early hours of this morning – causing ‘extensive damage’ just two days after a school four miles away was razed.

Ravensdale Infant and Nursery School in Mickleover was seen alight at 1.38am and Derbyshire Fire & Rescue Service (DFRS) was called.

The incident comes after a ‘devastating’ fire just more than four miles away at St Mary’s School in Darley Abbey, which resulted in the total loss of the building.

Some 12 fire engines and 75 firefighters from across the county raced to the scene today and two aerial ladder platforms, a command unit, water carrier and welfare unit were used.

There were no casualties as a result of the blaze, the fire service said.

Ravensdale Infant School in Mickleover was seen alight at 1.38am – prompting Derbyshire Fire & Rescue Service (DFRS) to race to the scene. Pictured, flames ripped through the building

Local resident Lucy Shepherd told the Derbyshire Telegraph: ‘At about two o clock we heard voices outside so we came to the window to look and police cars and fire engines lined the road, trying to get access to the school.

‘I checked on my son and all we could see was plumes of black smoke behind a bungalow opposite us. The sky was glowing red.’

The school’s headteacher Lorna Blancenot, who was on the scene from 2am, said she was ‘devastated’ and ‘in shock’ after a large portion of the school building was destroyed.

She revealed she told parents about the fire at 5.30am, adding that she didn’t know what had caused the blaze.

At St Mary’s School, six fire engines spent the day tackling the blaze after they were called to the scene at 5.24am on Saturday.

Commenting on the Mickleover fire, area manager Clive Stanbrook said: ‘Firefighters from across Derbyshire have been working hard since early this morning fighting the fire at Ravensdale Infant School.

‘Crews worked swiftly to control the spread of the fire, with the fire now under control; however, sadly, large parts of the infant school have suffered extensive damage. We expect to have a presence at the fire throughout the day. 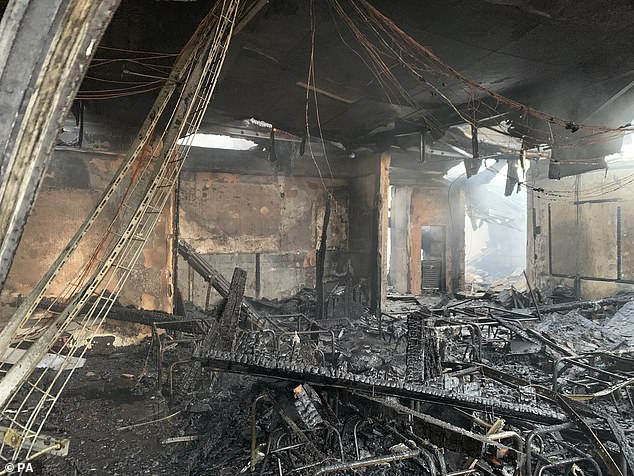 Photographs show the after-effects of the fire, with collapsed ceilings leaving debris and charred wood scattered across the floor of the school 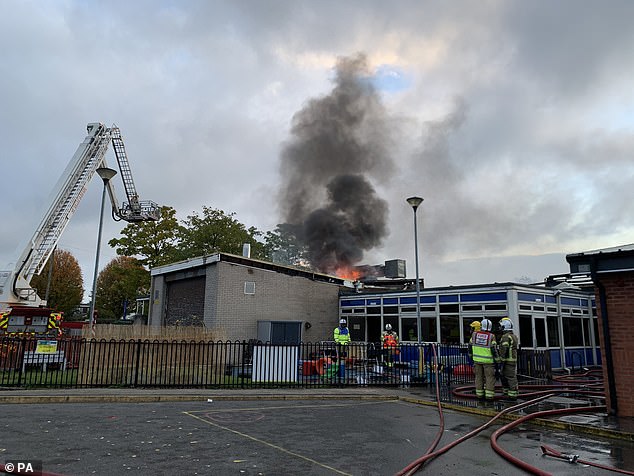 ‘Tragically this is the second school fire in Derbyshire in less than 48 hours, with St Mary’s School in Darley Abbey being destroyed by a severe fire on Saturday morning.’

‘Both fires are now under separate investigation and we will continue to work jointly with our police colleagues to investigate the cause of each of these fires.’

Photographs taken of the fire showed plumes of black smoke rising over the building as firefighters tried to dampen the roaring flames.

Other images show the after-effects of the fire, with collapsed ceilings leaving debris and charred wood scattered across the floor of the school. 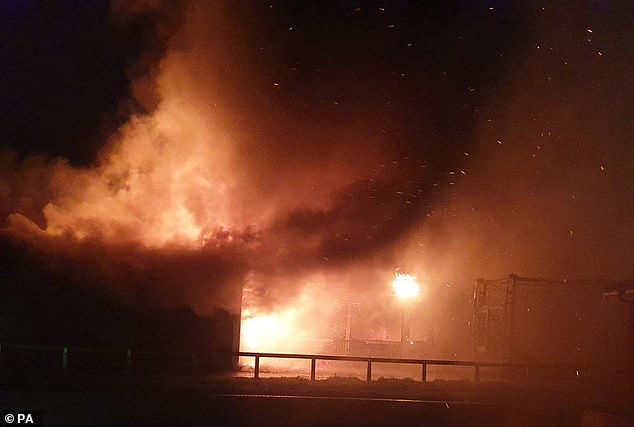 Some 12 fire engines from across the county were called to the school and two aerial ladder platforms, a command unit, water carrier and welfare unit were used 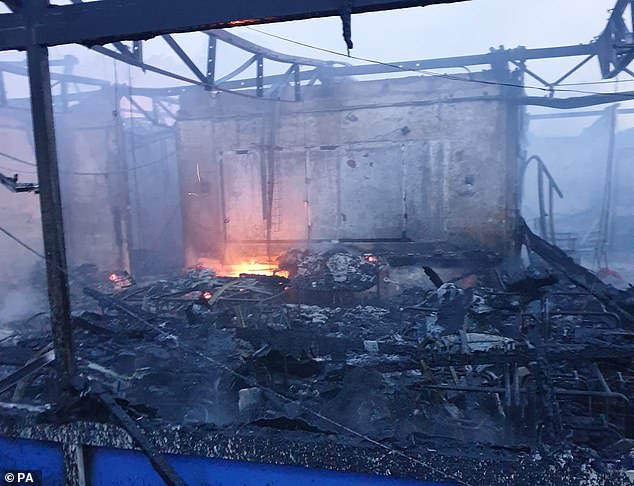 There were no casualties as a result of the blaze (pictured), the fire service said. Fire crews will remain at the scene today

‘Crews from DFRS have been firefighting throughout the night.

‘Tragically most of the infant school lost. Will work with the National Fire Chiefs Council to make new schools safer.’

Residents living near Ravensdale Infant School have been asked to keep windows and doors closed and to avoid the area due to smoke from the fire. 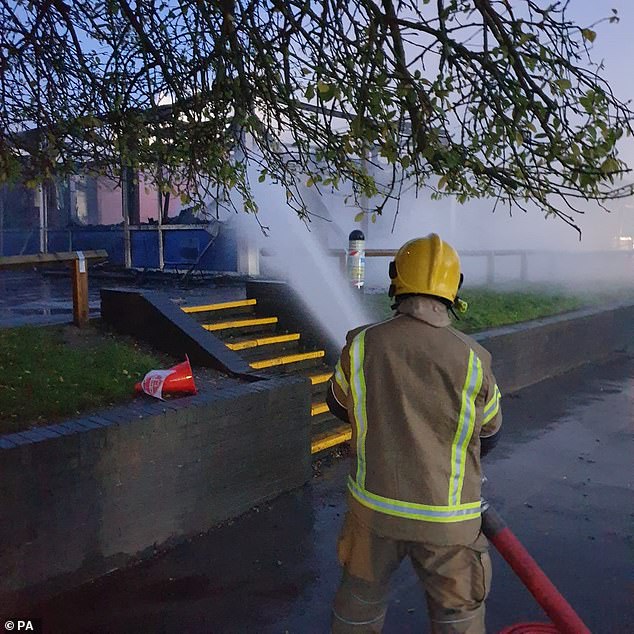 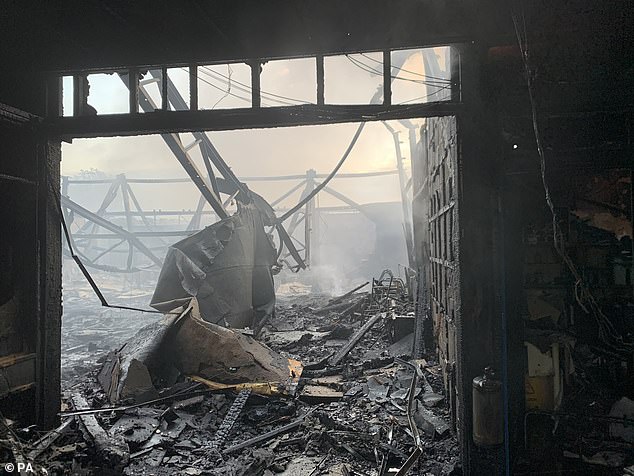 Police are investigating Saturday’s fire as a possible arson after an apparent break-in before firefighters were called, according to reports.

The blaze was said to be ‘well-developed’ when firefighters arrived and despite their efforts, the fire resulted in the ‘total loss’ of a building, Derbyshire Fire and Rescue Service has said.

According to the BBC, the city council was told an alarm was raised about a break-in shortly before the fire service was called.

In a statement on Twitter, the force said: ‘Investigations are ongoing to establish the cause of the fire and anyone with information should contact the force with ref 160-031020.’