Provincial police and Six Nations demonstrators blocking a housing development in Caledonia, Ont. are clashing over a video the OPP Commissioner shared on social media.

The clip runs just over a minute long and shows a man carrying a lacrosse stick approaching an OPP cruiser while shouting it’s “time to go.” An officer in the driver’s seat can be seen using the radio to describe what’s happening as the man hits the car with the stick and another throws a rock, cracking the windshield.

In a tweet sharing the video Sunday evening, Commissioner Thomas Carrique said protesters have “falsely blamed” the OPP for escalating the situation.

“Extremely proud of my officers for their professional and measured response to keep the peace & preserve life while under attack,” he wrote, without providing any further context about where or when the video was recorded.

Those details are important, according to Skyler Williams, a spokesperson for the demonstrators who have been occupying a camp they call 1492 Land Back Lane for the past 100 days.

“I think it’s really despicable content that you show a one-minute clip out of context. That was just following rubber bullets being fired at people, a guy getting Tasered,” he said during a media conference Monday.

“These are the tactics that we’re used to seeing from not just the OPP, but police in general, across the county when it comes to dealing with people of colour. This is why Black Lives Matter is the way it is. This is why Indigenous standoffs are happening across the country.”

The police presence near the camp came just hours after a judge granted a permanent injunction against the demonstrators and a skirmish with police took place.

Williams believes the video was recorded moments after provincial police arrived at a smaller camp next to Argyle Street South, where a group of people, including elders, were sitting around a fire.

WATCH | An initial confrontation at the scene: 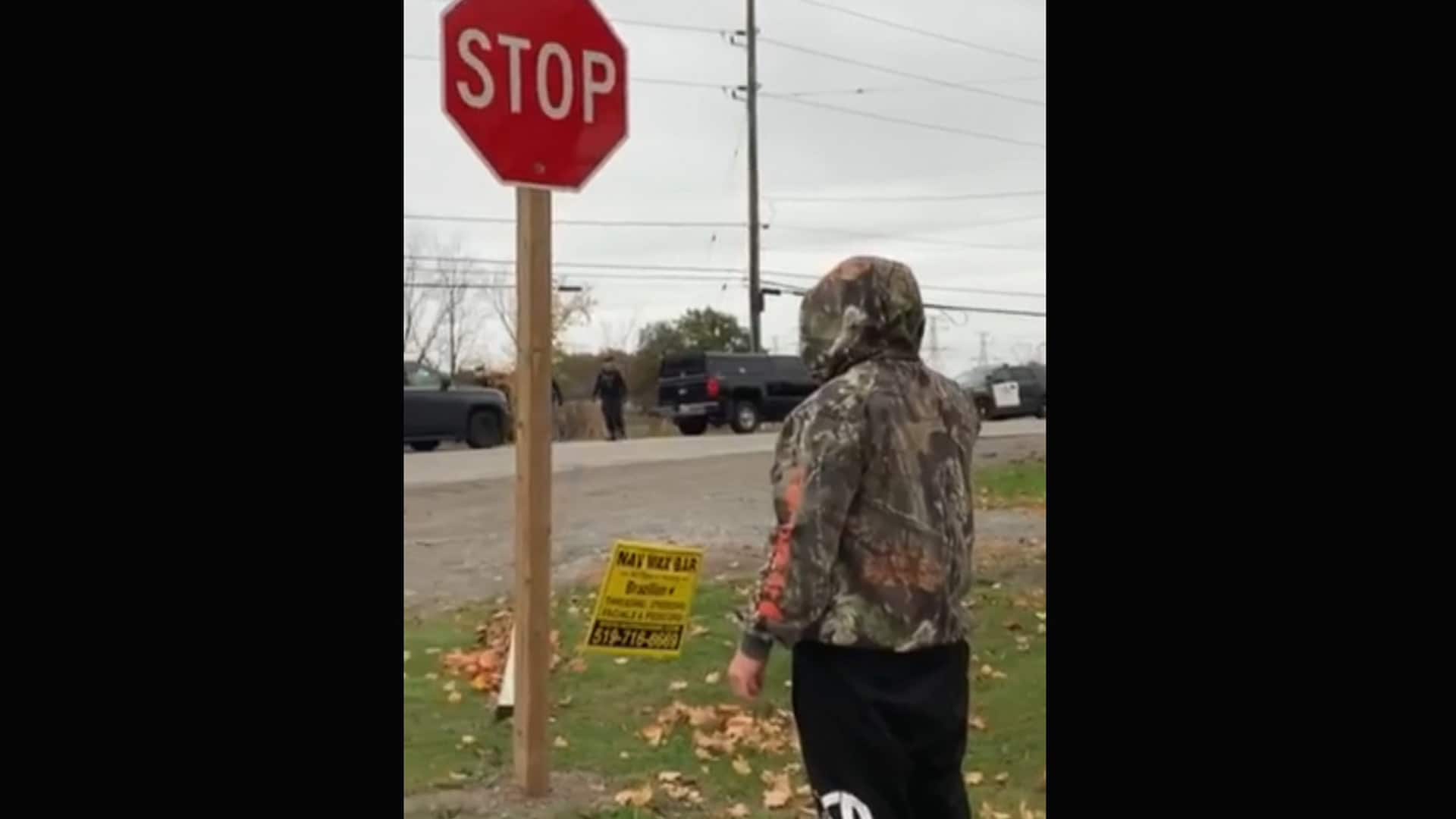 This footage, provided by Six Nations community members, was recorded at the back entrance to the 1492 Land Back Lane reclamation camp, which was set up by members of Six Nations in July to stop a housing development in Caledonia, Ont. 0:47

He stressed that area is not covered by an injunction, but said those there were almost hit by a rubber bullet.

The people shown in the video were upset and “trying to tell the cops you’re not allowed to shoot at our elders,” he added, noting nobody besides police knew they had rubber bullets.

Const. Rod LeClair, spokesperson for Haldimand County OPP, said the video was recored on Oct. 22 and the cars were parked on the street to “keep peace in the town.”

He said he did not have any additional footage of the confrontation.

One rubber bullet was fired and a Taser was used to “gain control of the assaultive suspects,” said LeClair.

Premier Doug Ford weighed in on the video Monday, saying what it showed was “disgusting” and “unfortunate.”

“Don’t be attacking our police officers, They’re there to help you, to support you, to keep law and order,” he said. “Just imagine if we didn’t have the police, there’d be anarchy.”

In an update shared on Twitter Monday afternoon, OPP said that when officers tried to make arrests they are confronted by a larger group throwing rocks and pieces of wood.

One of the people involved has been identified and will face charges.

Williams said he’s been in contact with OPP daily, telling them the increased police presence in the area is only escalating things.

The situation did not need to come to this, he said, pointing to the federal and provincial governments and saying officials have been dragging their feet.

The property being blocked by demonstrators is part of the Haldimand Tract, granted to Six Nations of the Grand River in 1784 for allying with the British during the American Revolution. The granted land encompassed 10 kilometres on both sides of the 280-kilometre Grand River which runs through southern Ontario and into Lake Erie. Six Nations now has less than five per cent of its original lands.

The Six Nations elected council has an ongoing court case, filed in 1995, against Ottawa and Ontario over lost lands. It is scheduled to go to trial in 2022.

Crown-Indigenous Relations Minister Carolyn Bennett’s office said in an emailed statement that it wants to meet with the community “at the earliest opportunity.”

The statement said “Canada deeply values its relationship with Six Nations” and wants to work “collaboratively” to deal with the “historical claims and land right issues.”

Williams said he remains hopeful, but that police showing up with guns is not the “honest and open dialogue” that’s needed for a nation-to-nation approach.

“I think this is Canada’s new land claims policy, This is what that looks like — violence. How can you have fruitful negotiations when you’ve got the barrel of a gun pointed at you?” he asked.