Demand for rail travel fell to levels not seen since the mid-19th century with 400million fewer journeys after virus outbreak – with £184m made in ticket sales compared to £2.7billion in 2019

The Office of Rail and Road (ORR) said more than 400 million fewer journeys were made between April and June compared with the same period in 2019.

Just 35 million journeys were made during the quarter this year, compared to 439 million last year.

Passenger revenue between April and June was £184million, just 6.9 per cent of the £2.7 billion in the same period last year.

Demand for rail travel sank to mid-19th century levels following the coronavirus outbreak, new figures show. Pictured: A deserted Waterloo station at the start of the Covid-19 lockdown in March

Department for Transport (DfT) figures show demand has since returned to around 38 per cent of normal levels.

ORR director of railway planning and performance Graham Richards said: ‘This unprecedented fall in passenger numbers, the largest on record to levels last seen in the mid-19th century, has clearly had an impact on both rail usage and also ticketing revenue.

‘These figures include the period of lockdown and reassuringly we’re now seeing passenger numbers slowly increase.

‘ORR has worked closely with the industry, and continues to do so, to ensure the necessary health and safety advice and guidance is in place.

‘Rail is one of the safest ways to travel and our inspectors continue to monitor the reality on the ground to ensure people have the confidence that they can travel safely.’

In England, the most significant fall in passenger numbers were logged by Great Western Railway. They were just five per cent of normal volumes. 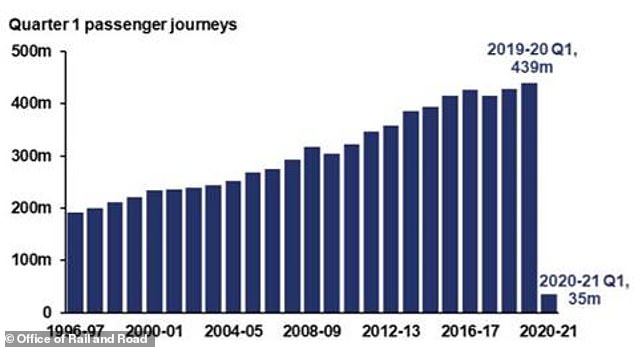 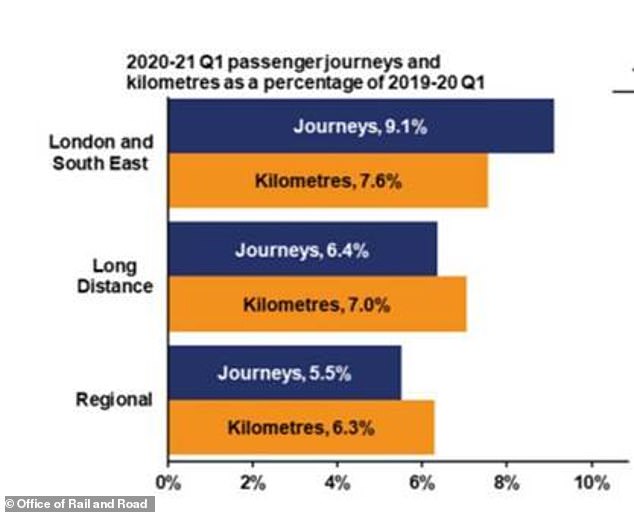 Just 35 million journeys were made during the quarter this year. Pictured: A graph showing the huge plummet in the distance travelled on railways in the first quarter of this year compared to last year

The most significant drop overall was recorded on Scot Rail, which saw levels that were just 4.3 per cent of those before the pandemic.

Transport for Wales’s had a 4.5 per cent figure.

A Department for Transport spokeswoman said: ‘The significant decline in passenger numbers reflects people acting on Government guidance early in the pandemic to travel only if essential, helping tackle the virus and ensure space was preserved for key workers.

‘We took immediate action and have invested billions to maintain the services people rely on, protecting frontline jobs and ensuring railways stand ready to support our national recovery.’

A survey by the Government department also appeared to show that people are continuing to avoid public transport because of fears of catching Covid-19.

This is despite the fact that operators including Transport for London have installed safety measures such as hand sanitiser stations, one-way systems and socially-distanced carriages.

An astonishing 86 per cent of people said they had concerns for their health when considering using public transport.

Only 19 per cent had concerns about using their car. 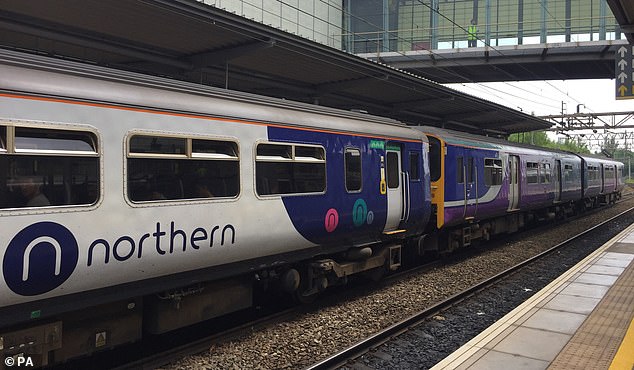 Last month, it emerged the taxpayer will be landed with a bill of more than £3.5billion to prop the rail network until 2022.

The money will be used to keep loss-making services running.

The Department for Transport announced ‘Transitional contracts’ signed at the start of the pandemic to keep trains running would be extended for another 18 months.

It means the taxpayer will continue to take on franchise holders’ revenue and cost risks.

Transport Secretary Grant Shapps said: ‘The model of privatisation adopted 25 years ago has seen significant rises in passenger numbers, but this pandemic has proven that it is no longer working.

‘Our new deal for rail demands more for passengers. It will simplify people’s journeys, ending the uncertainty and confusion about whether you are using the right ticket or the right train company.