Demand for new mortgages fell 75% at end of 2022 according to BoE, as homeowners were hit by increased interest rates and rising cost of living

Demand for mortgages to purchase a home fell sharply in the final three months of last year, as rising mortgage rates and the cost-of-living crisis impacted the market.

New mortgages for property purchases dropped 75 per cent compared with the previous three months, according to data from the Bank of England.

Lenders expect the fall in demand to continue in the first quarter of this year, although the landing will be softer than the end of 2022, the BoE said.

Although demand for remortgaging also fell, the drop was far less pronounced at 17 per cent.

Rates, though declining, are unlikely to ease much further and now is a good time to act

‘Demand for mortgages for the purchase of homes dropped dramatically during the last three months of the year, and is expected to ease further in the first three months of 2022, although lenders expect the drop off to moderate.

‘The data shows the degree to which the market has stabilised in the wake of the mini-Budget, but headwinds will persist through the year, depressing the demand for mortgages.

‘Borrowers can clearly see that conditions are better than they were just a few weeks ago and rates, though declining, are unlikely to ease much further and now is a good time to act.’

‘We’re now entering a “new normal” for mortgage rates, with the best five year fixed products a little under 4.5 per cent.’

Mortgage rates rose rapidly at the end of last year, thanks to uncertain economic conditions in the UK and the fallout from the disastrous mini-Budget in September, but they are now slowly falling.

Interest on the average five-year fixed mortgage has dropped well below 6 per cent to 5.42 per cent, as more lenders reduce their rates.

Two-year fixed rate deals are now at an average of 5.6 per cent, according to Moneyfacts.

But the best deals available now are heading towards 4 per cent, with rates as low as 4.04 per cent on a 10-year fix for those with large deposits. 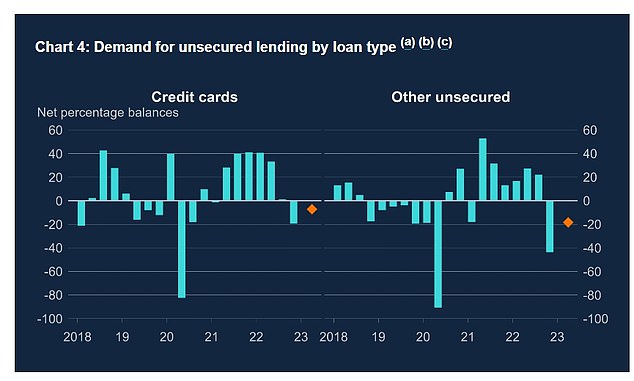 At the same time as demand for mortgages fell, credit card loan applications rose by 17 per cent from October to December last year, highlighting the increasing reliance by households on credit as rising prices continue to squeeze finances.

And credit availability also fell, down 36 per cent at the end of 2022 and set to fall by another 50 per cent over the first quarter of 2023.

This is in part due uncertain economic conditions and the decline in risk appetite among lenders.

Sarah Coles, senior personal finance analyst at Hargreaves Lansdown said ‘We’re already struggling with debts like credit cards and loans, and the number of defaults rose in the last three months of the year.

‘Unfortunately, as we go through the rest of the winter, there’s a good chance this will get even worse.

‘Rising rates play their part, but the sheer scale of people’s debts also poses enormous challenges. Those who have been borrowing to make ends meet as prices have risen are running out of options.

‘As time goes on, those debts mount, and people struggle to find additional borrowing, they’re going to be increasingly vulnerable. And while debt feels like the answer to our problems in the short term, it creates huge problems of its own.’