Commuters are facing four months of delays amid plans to close a key part of the London Underground Northern line for a major upgrade of Bank station.

From January to May next year the line running between Moorgate and Kennington will be shut.

The closures are part of a £700million plan to upgrade Bank station and turn it into a ‘crown jewel’ of the London Underground network.

There will be a new southbound platform built and a new entrance at Cannon Street as part of the development, while walking time to change between lines would also be reduced in the new station.

Transport for London (TfL) announced their timetable for the closures on Monday, revealing that the section will be closed from January 15 until mid-May next year.

The renovations were due to start earlier, but the Covid pandemic put a halt to the works.

As the 17-week shutdown was announced, TfL’s managing director for customers, communication and technology said the end result would be worth the ‘blockade’. 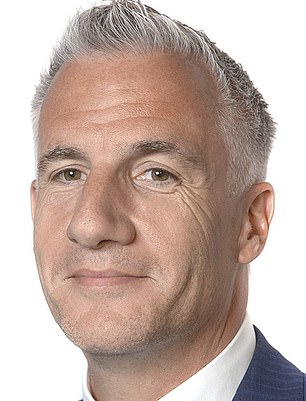 Stuart Harvey, director of major projects for TfL (pictured), apologised for the upcoming disruption and said it was essential to completing the ‘vital and complex’ work

Speaking to the Evening Standard, Vernon Everitt said: ‘While there is never a right time to do anything like this, the prize at the end of the day of a new ‘crown jewel’ that we will have in the centre of the city to attract people back to London.

‘We believe is worth the disruption of a 17-week blockade.’

Three quarters of a mile of new tunnels have been dug in preparation for the major improvement works next year.

The development was designed to increase capacity at the station, which along with Monument, was the third busiest interchange on the Underground network before the pandemic sent passenger numbers plummeting.

There will be step-free access to the Northern line via two new lifts, and another 12 escalators will be installed.

Two other moving walkways will also be installed to reduce walking time between the Northern and Central lines, the Evening Standard reports.

According to the publication, there will be more trains on the Charing Cross branch to increase capacity to and from central London when the works start. 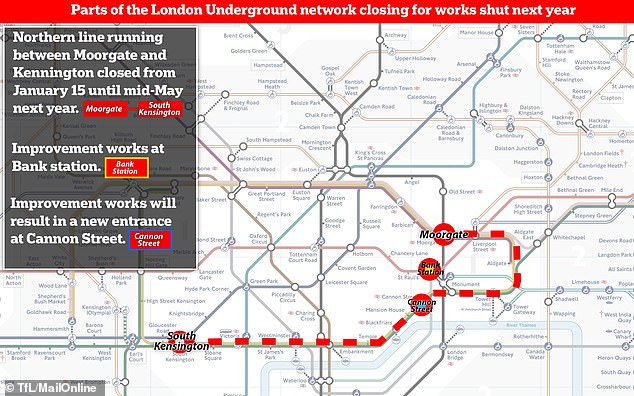 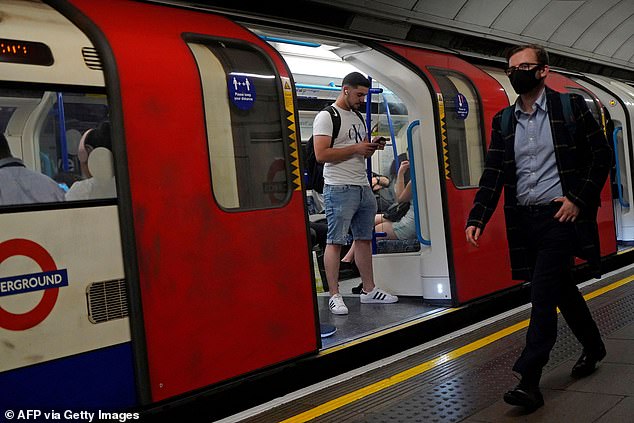 The development was designed to increase capacity at the station, which along with Monument, was the third busiest interchange on the Underground network before the pandemic sent passenger numbers plummeting (stock image)

TfL is also planning on launching a new bus route between Oval and the City to alleviate the pressure on the stretched line.

But theree are concerns that the measures will not be enough to avoid congestion and delays for commuters.

Stuart Harvey, director of major projects for TfL, apologised for the upcoming disruption and said it was essential to completing the ‘vital and complex’ work.

He told the Evening Standard: ‘The changes to the station will transform the experience of every customer that uses Bank and will help the City as it continues to recover and people return to the area.

‘I look forward to that work being complete next year, but I am sorry that this vital and complex work will cause disruption early next year.’

So far the work to improve Bank station has been done while the station has remained open to passengers.

It began five years ago with more than 200,000 tonnes of material excavated from the new platforms and tunnels.

The work is set to finish around Spring 2022 with the new entrance on Canon Street opening later that year in October. 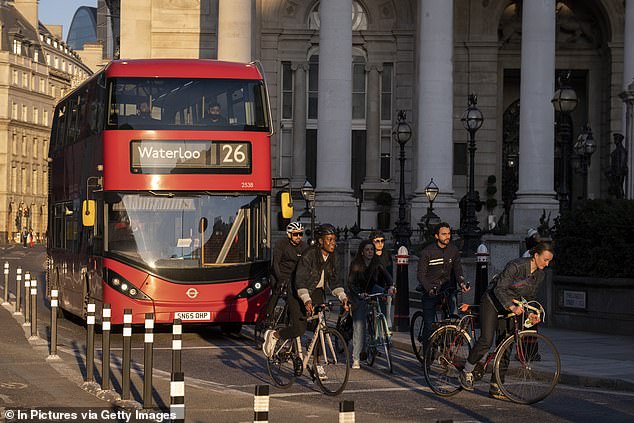 It comes ahead of the opening later this year of the much-anticipated £1.2billion Northern Line extension to the iconic Battersea Power Station.

The Northern Line extension began in 2015 and is expected to open in September at the earliest after it was delayed three years ago due to ‘miscalculations’.

It starts at Kennington and will terminate at the Grade II-listed Battersea power station, a decommissioned coal-fired plant owned by Malaysian investors.

TfL is aiming to turn the 120-year-old Northern Line, which connects Barnet, Edgware and Morden with central parts of the capital and is in parts 200ft deep, into what it calls the ‘black diamond’ of London.

The extension was given the go-ahead in November 2014 by then Transport Secretary Patrick McLoughlin and construction began the next year. Tunnelling started in March 2017 and finished later that year.

It has periodically run into problems, and stopped completely amid the spread of coronavirus in March 2020. However, it returned three months later after implementing covid-secure measures including social distancing.

The hold-up comes in the wake of the £19billion Crossrail fiasco, the east-west line through central London which has been repeatedly delayed which has cost so much that it could be mothballed if it does not receive further financial support from the Government – a sign of its ballooning cost.