Whilst she became the first celebrity to be eliminated from this year’s Strictly Come Dancing last night, Jacqui Smith has certainly not let the boot get her down.

The former Labour Home Secretary, 57, was spotted in a passionate clinch with the new man in her life, Dr Graham Timmins, whilst on a romantic morning walk on the foggy Malvern Hills in Worcestershire today.

Dr Timmins, revealed to be a politics lecturer at the University of Birmingham who speaks fluent Russian, has reportedly taken Jacqui into his ‘bubble’ for the current lockdown as he lives alone.

The happy couple, whose homes are two miles apart, met outside a yoga class in Malvern, Worcestershire, in March, just days before the first lockdown – they ‘courted’ over zoom for weeks.

The former Labour Home Secretary, 57, was spotted with Dr Graham Timmins, whilst on a romantic morning walk on the foggy Malvern Hills in Worcestershire today

After lockdown rules were relaxed, Dr Timmins, a divorced father of two adult daughters, was spotted at the home that Ms Smith shares with her two sons, James and Michael.

Today Ms Smith made it evident that she had clearly not fallen victim to the Strictly curse with her professional partner Anton du Beke – despite having spent weeks living in a ‘covid bubble’ with the dancer in London.

The couple put on a romantic display as they walked hand in hand during their daily exercise, laughing with each other and stopping for a passionate kiss before getting in the car home.

During the pre-recorded results show the politician faced Made In Chelsea star Jamie Laing in this week’s dance-off after landing at the bottom of the leaderboard with 25 and 31 points out of 40, respectively. 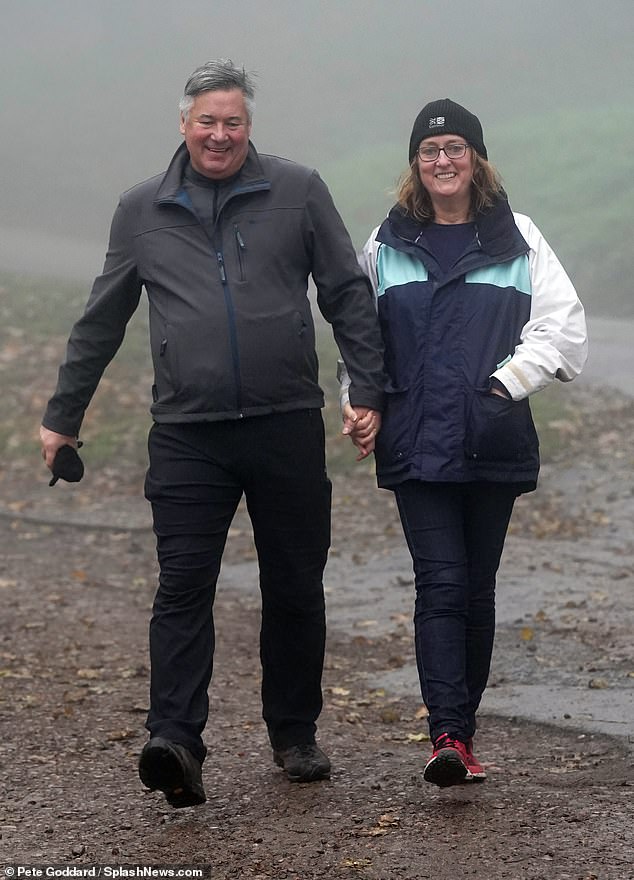 The pair put on a romantic display as they walked hand in hand during their daily exercise, laughing with each other and stopping for a loving peck before getting in the car home 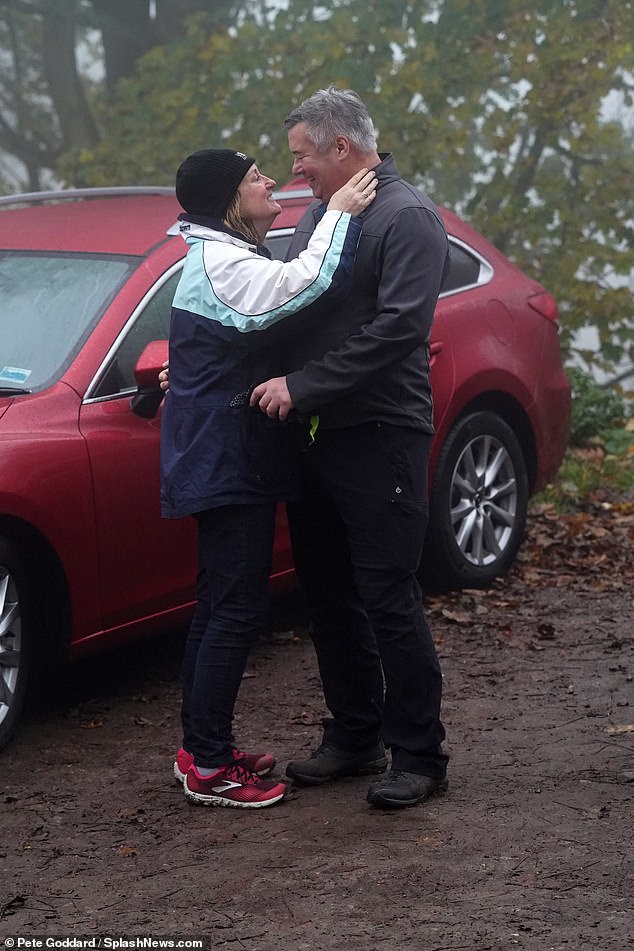 The pair were all smiles as they enjoyed a quiet morning walk together, stopping for a kiss by the car 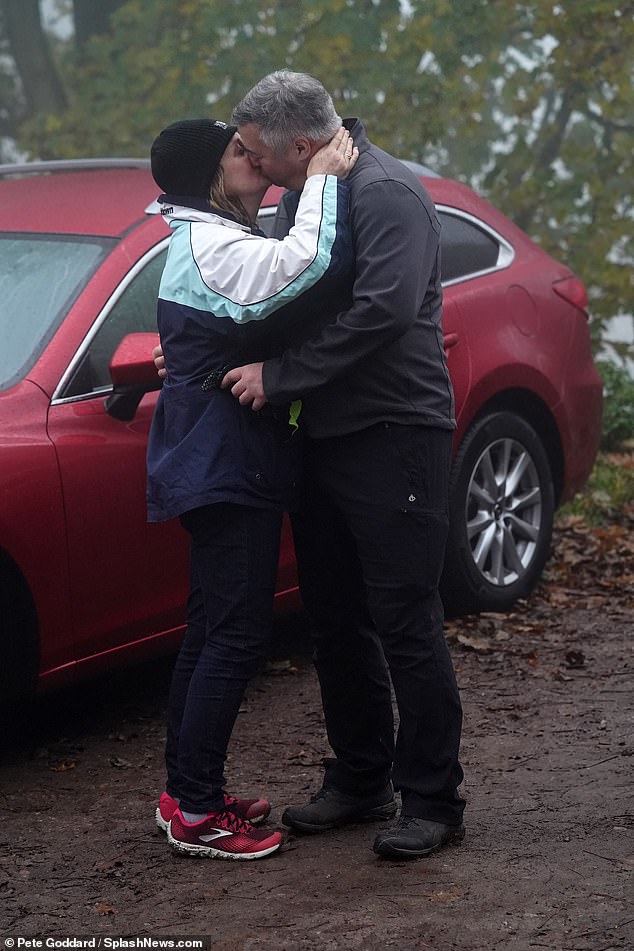 The happy couple, whose homes are two miles apart, met outside a yoga class in Malvern, Worcestershire, in March 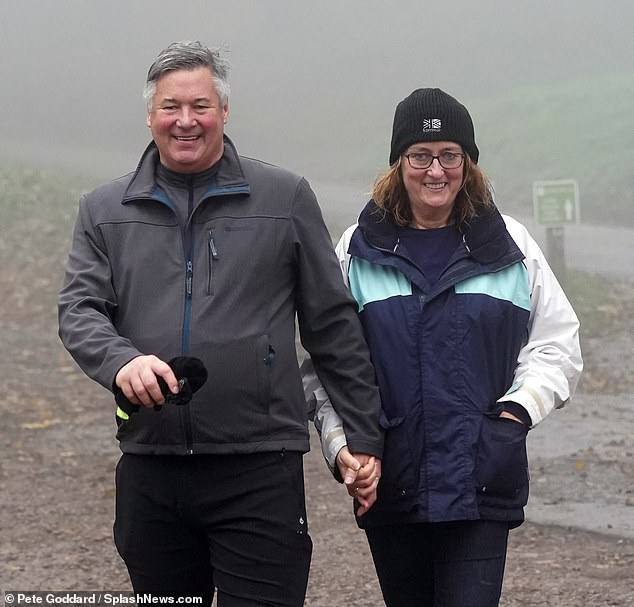 Ms Smith branded her short stint on the series a ‘greatest adventure’ and expressed her gratitude towards her professional partner Anton du Beke, who she described as an ‘absolute joy to be with.’

The political commentator fell short when she and ballroom pro Anton, 54, performed their Samba to Help Yourself by Tom Jones again, while reality star Jamie, 31, and Karen Hauer, 38, danced the American Smooth to Frank Sinatra’s Night and Day.

Since the collapse of her ‘long, happy’ 33-year marriage to Richard Timney, Jacqui has pirouetted from serious politician to dancefloor diva, thanks to Strictly.

But the BBC show is not the only thing to have reinvigorated the former Labour Home Secretary, who is said to be ‘loved-up’ with her new beau Dr Timmins, a highly acclaimed international politics lecturer. 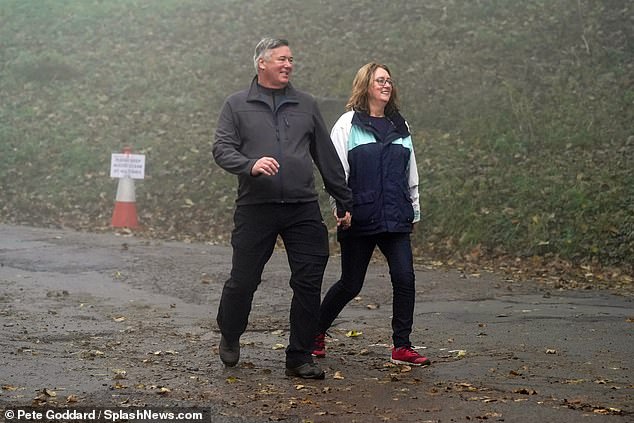 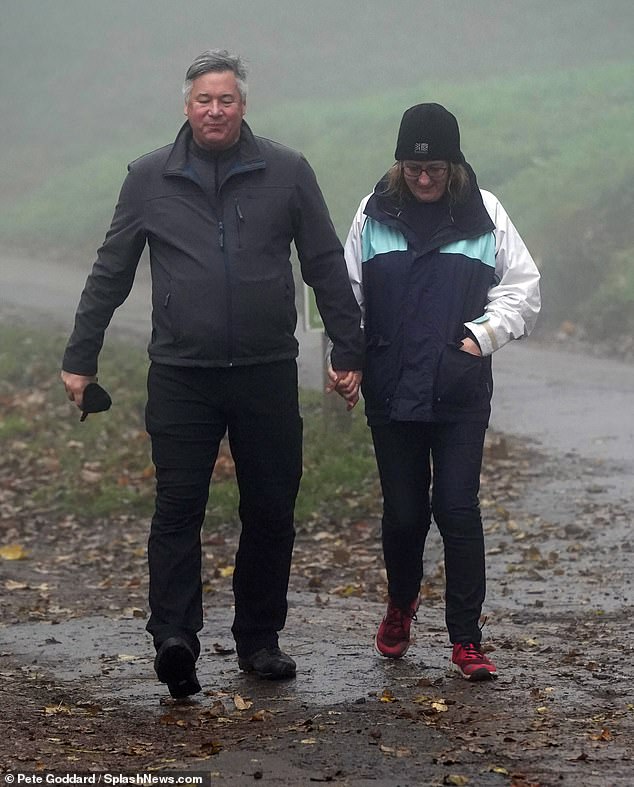 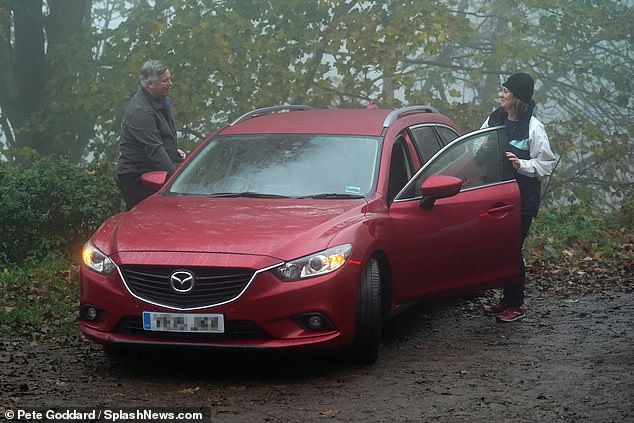 And it is perhaps their shared love of politics which brought them together just two months after Ms Smith, a passionate Remainer, announced that she had split from her husband. 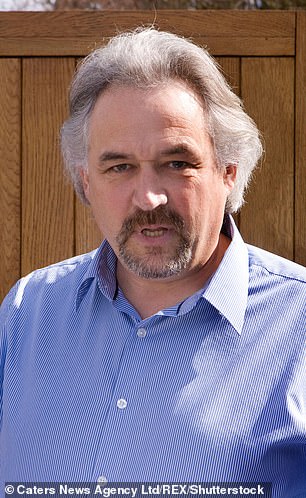 Speaking to Loose Women last month on the break up of her marriage Ms Smith said: ‘I’m in my late 50s, I’ve had some professional changes, some personal changes, my long happy marriage has come to an end… I wanted to do something totally out of my comfort zone.’

She added: ‘It’s been 33 years since I last went dating, it’s all online so you just have to go for it… I’m zooming with my new partner and in some ways it’s like old fashioned courting, let’s say.’

Ms Smith left office in 2009 after the expenses scandal, when it was revealed that Mr Timney had claimed for two pornographic films. She lost her seat the following year.

A source close to Ms Smith revealed: ‘She is totally loved-up but keeps telling everyone it is early days. Given Graham’s specialist subject is politics, it is obvious they have a lot in common. They are both really happy. To find love at this age feels incredible for both of them.’ 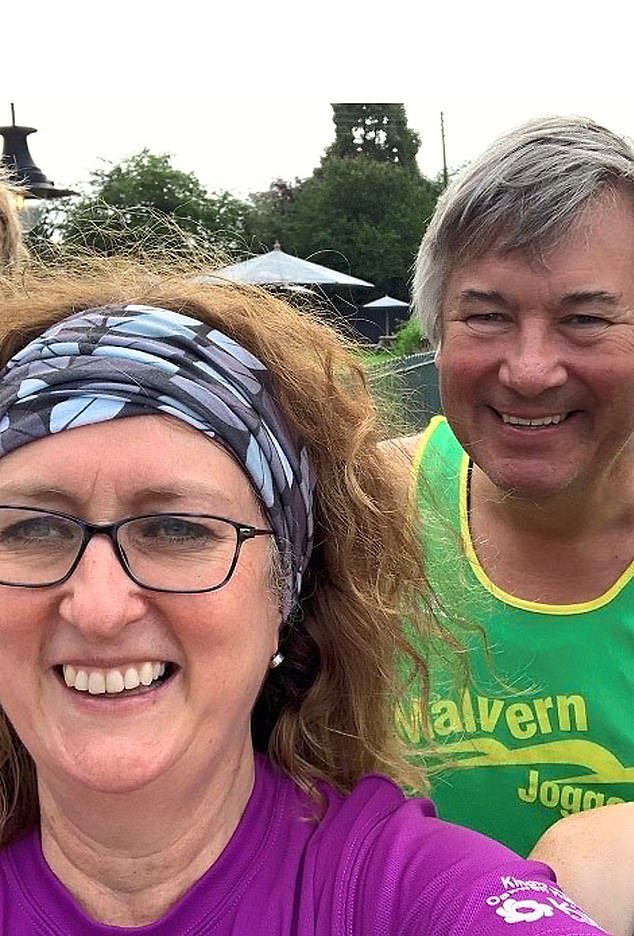 She has kept his identity under wraps, but The Mail on Sunday revealed that her new beau is Dr Graham Timmins, a highly acclaimed international politics lecturer at Birmingham University

Last week she said of the couple’s first encounter: ‘We crossed on the stairs and I thought, ‘He’s nice.’

Ms Smith was given the boot when judges Craig Revel Horwood, Motsi Mabuse and Shirley Ballas unanimously chose to send the Candy Kittens CEO through to next week’s Strictly, as their scores from the whole competition were combined with the results of the viewers’ votes.

When asked by host Tess Daly, 51, about her time on the show, Jacqui said: ‘I had the greatest adventure it’s possible to imagine. 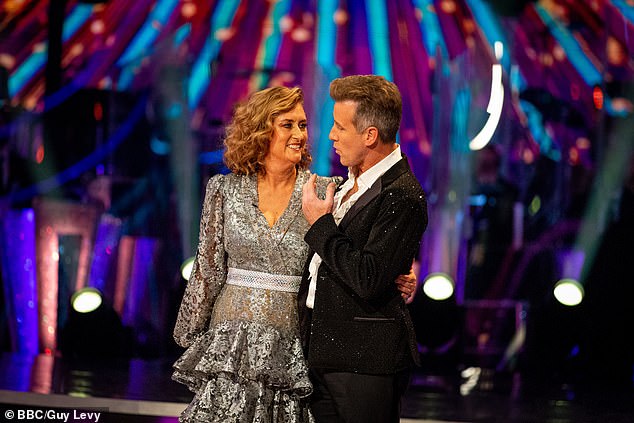 She’s out! Jacqui Smith became the first celebrity to be eliminated from this year’s edition of Strictly Come Dancing on Sunday (pictured with professional partner Anton du Beke) 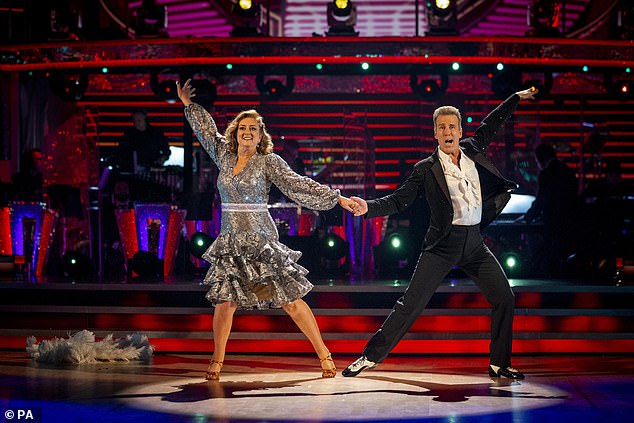 ‘I don’t feel too much shame in losing to these guys because they are a fantastic bunch of dancers’: The broadcaster branded her short stint on the series an ‘greatest adventure’

‘I’m just sorry I can’t continue it with this man who has been absolutely fantastic and gorgeous to be with.

‘But I don’t feel too much shame in losing to these guys because they are a fantastic bunch of dancers, they really are.

‘So I’ll be watching you and supporting you. To Anton I would like to say you have been just an absolute joy to be with. I am so pleased and proud to have spent this time with you. 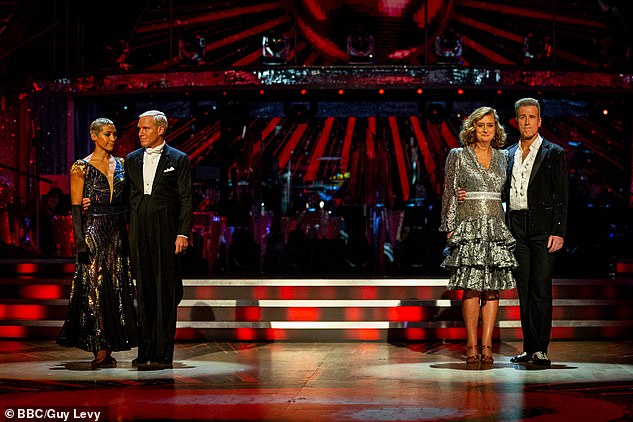 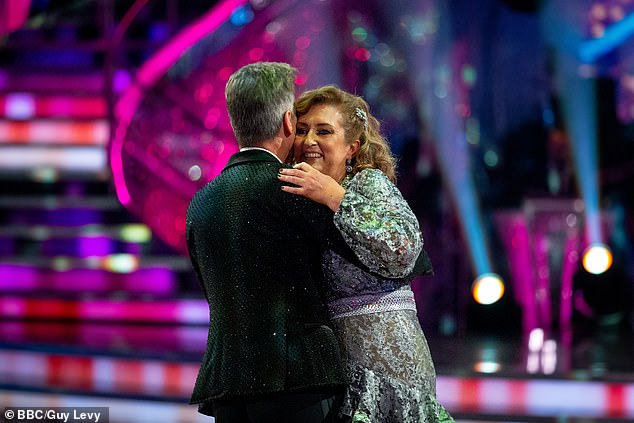 Sad times: The duo shared a goodbye hug as they ended their dance union following a whirlwind appearance

‘And to everybody on the programme I don’t think people realise just how brilliant the team is that put this programme together and if ever we need Strictly, we need it now so thank you so much.’

This Morning star Anton also praised his celebrity partner as he added: ‘Well I’ve loved every second of being in the studio with you.

‘We have laughed, you have a shocking sense of humour I can’t begin to tell you. You are just the best and I’ve loved it. Thank you from the bottom of my heart.’