A video is challenging the internet to see if they can determine which actress is real and which is the artificial intelligence-generated deepfake  – and many have been left stumped because the fake ‘looks pretty convincing.’

The short clip, shared on Twitter, features Elizabeth Olsen on one side and Scarlett Johansson on the other, and both are speaking and moving the same exact way and have the same haircut.

Many Twitter users are amazed at how real both videos look, but some have been able to figure out which is the fake actress – and it is Scarlet Johannsson.

Where the bangs fall on her face appears to glitch, making it look like she has a double-eyebrow and some of the shadows are not falling in the right places.

Regardless, users are astounded at how real the deepfake looks and are terrified of ‘what the future will bring.’

The short clip shows Olsen and Johansson talking as if giving an interview, saying the same words with the same facial expressions, Daily Star reports.

With a quick glance, the two are nearly twins, but some Twitter users studied the videos to uncover the deepfake tricks.

Along with the double-brow, users spotted issues with the lighting on Johannsson’s face and how her neck bulges when speaking.

And although flaws were spotted, users said the deepfake still looks ‘pretty convincing.’ 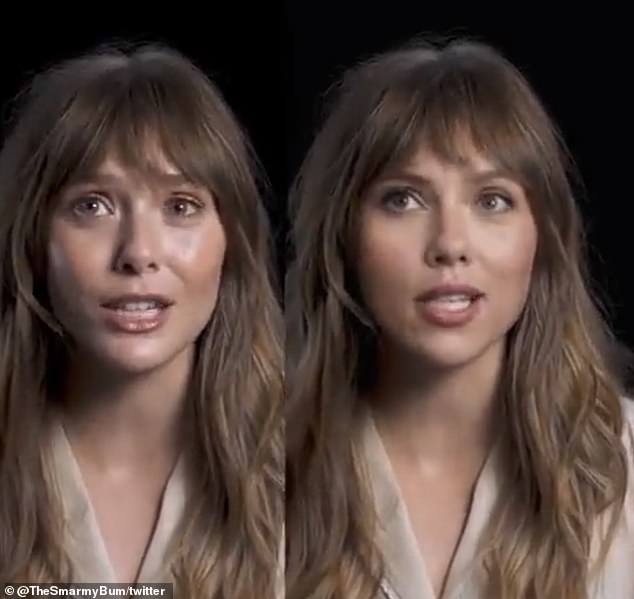 Both actresses have the same hairstyle, makeup and clothes in the short video 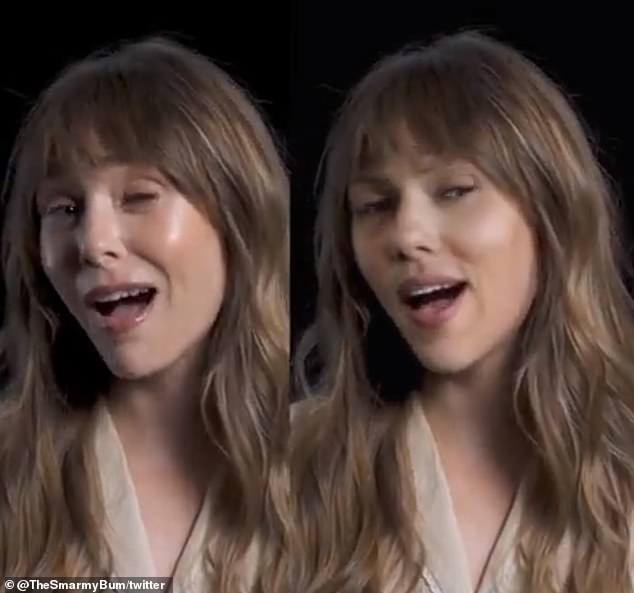 The short clip shows Olsen and Johansson talking as if giving an interview, saying the same words with the same facial expressions

Many Twitter users are amazed at how real both videos look, but some have been able to figure out which is the fake actress – and it is Scarlet Johannsson

Deepfakes were invented in 2014 by Ian Goodfellow, who was the director of machine learning at Apple’s Special Projects Group and a leader in the field.

The word stems from the collaboration of the terms ‘deep learning’ and ‘fake,’ and is a form of artificial intelligence.

The system studies a target person in pictures and videos, allowing it to capture multiple angles and mimic their behavior and speech patterns.

The technology gained attention during the election season, as many feared developers would use it to undermine political candidates’ reputations.

However, some creators are not using the technology for evil and only to entertain people. 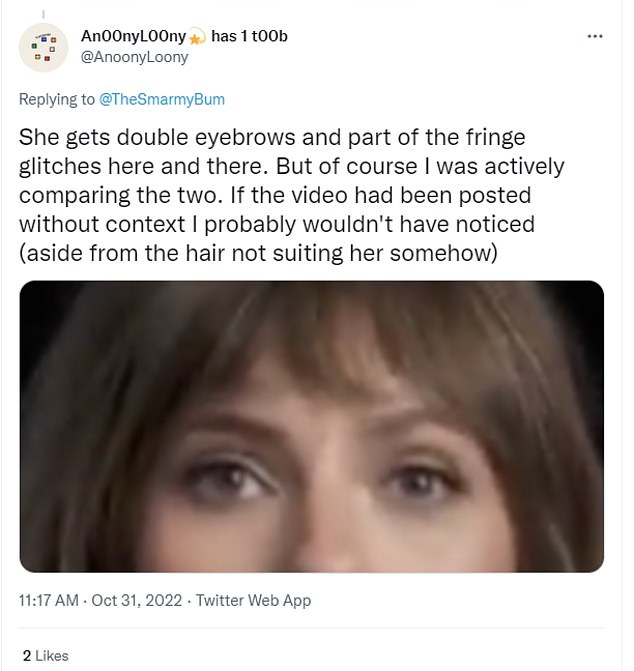 Where the bangs fall on her face appears to glitch, making it look like she has a double-eyebrow and some of the shadows are not falling in the right places

However, some Twitter users thought Olsen was the fake and Johansson was the real actress 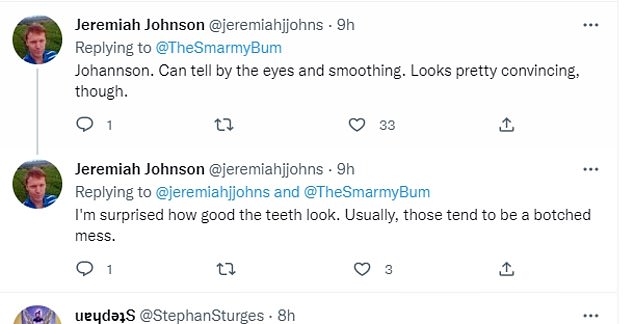 Along with the double-brow, users spotted issues with the lighting on Johannsson’s face and how her neck bulges when speaking

Deepfakes look like the real person it learns to mimic

Deepfakes are so named because they are made using deep learning, a form of artificial intelligence, to create fake videos of a target individual.

They are made by feeding a computer an algorithm, or set of instructions, as well as lots of images and audio of the target person.

The computer program then learns how to mimic the person’s facial expressions, mannerisms, voice and inflections.

With enough video and audio of someone, you can combine a fake video of a person with fake audio and get them to say anything you want.

For instance, in March 2021, a TikTok account shared clips of Tom Cruise, who was shown doing a magic trick, playing golf and reminiscing about the time he met the former President of the Soviet Union.

The deepfakes looks very similar to the Mission Impossible start, from his big smile and down to his misaligned front tooth – and it even sounds like Cruise when speaking.

A video shared to the account shows deepfake Cruise wearing a festive Hawaiian shirt while kneeling in front of the camera.

He shows a coin and in an instance makes it disappear – like magic.

‘I want to show you some magic,’ the imposter says, holding the coin.

‘It is the real thing, I mean it is all real,’ ‘Cruise says, waving his hand over his face as if to hint at the notion that he is not really the popular star.

The other clip shows Cruise walking through a clothing store where he trips, rolls over and jumps back on his feet to tell the TikTok world a joke about the time he met former Soviet Union President Mikhail Gorbachev.

The Tom Cruise deepfakes may be giving the world a laugh, but the technology is sparking fear in experts.

Leading expert Henry Ajder told the Times of London: ‘This technology is not going away, there are also a huge amount of really negative and malicious use cases.’

But other experts praise the work, as the fake Cruise mirrors the speech, mannerisms and appearance of the real celebrity. 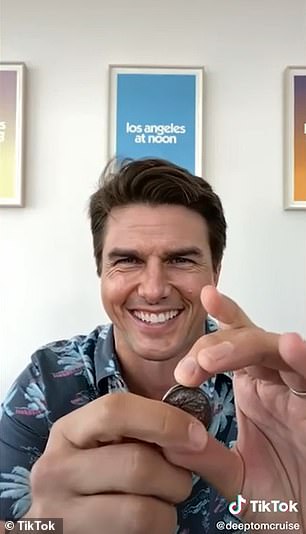 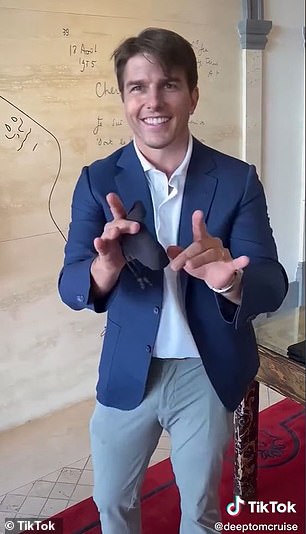 Another realistic deepfake surfaced last year, showing Tom Cruise perform several tasks. In the left, he is doing a magic trick and right he tells viewers a story

Hany Farid, a professor at the University of California at Berkeley who specializes in the analysis of digital images, told Fortune that although he knew the clips were deepfakes they are still ‘incredibly done.’

Farid may be alone with that opinion, as Rachel Tobac, the CEO of online security company SocialProof, tweeted that the videos proved we have reached a stage of almost ‘undetectable Deepfakes.’

‘Deepfakes will impact public trust, provide cover & plausible deniability for criminals/abusers caught on video or audio, and will be (and are) used to manipulate, humiliate, & hurt people,’ she said adding they had ‘real world safety, political etc impact for everyone,’ she tweeted.