EXPRESS INFORMER > News & Politics > DEBORAH ROSS: Accurate? No… but Emma Corrin as Princess Diana in The Crown is spot-on

It’s season four of The Crown and everyone is asking: but is it historically accurate? No. It is not. For instance, there is absolutely no evidence that Queen Elizabeth was once Claire Foy and then Olivia Colman.

None at all. Neither is there any evidence that Princess Margaret has ever been Helena Bonham Carter. Not a scrap.

On the other hand, you can choose not to go down that particular rabbit hole and just accept this for what it is: ten hours of riveting drama, the most compelling account of a disintegrating marriage, plus what we have been waiting for since day one, season one: Princess Diana. 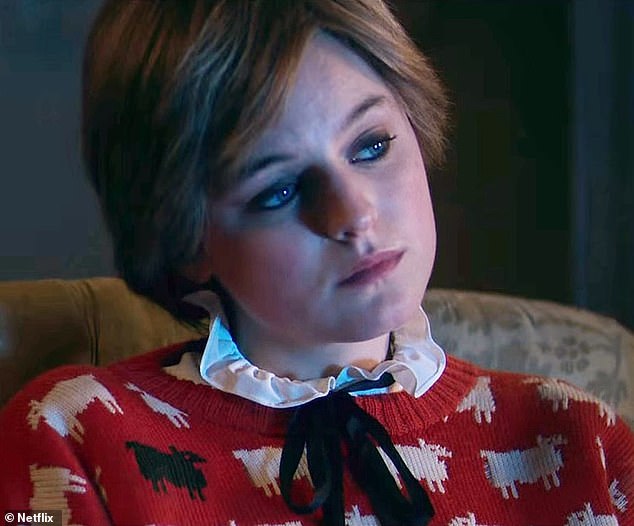 It’s a triumph, this season, mostly because the Diana we’ve all been waiting for is a triumph. She is played by Emma Corrin (above), who is sensational

And, as it happens, I can speak up for that jumper featuring the one black sheep, as I not only remember it but my sister bought one just like it. So we can be sure that is true, at least.

It’s a triumph, this season, mostly because the Diana we’ve all been waiting for is a triumph. She is played by Emma Corrin, who is sensational. She captures not just Diana’s mannerisms and her way of speaking and that doe-eyed look, but also her deeply ingrained sadness.

She captures the fact that there was something tragic about Diana before she even became tragic. And she also captures her internal journey from a kittenish girl with a crush and, let’s face it, terrible taste in knitwear, through to realising the reality of what she had actually signed up for. (Oh dear.)

As for Prince Charles, some have said he is portrayed too brutally and cruelly this time out, but I don’t know. If I were him I’d take being played by Josh O’Connor and retreat thankfully.

Is the portrayal unsympathetic? Isn’t he shown as a victim, too? A victim of a system that demanded he get married and produce an heir (and a spare) despite being in love with someone else?

The pair do try to make a go of it. The most devastating episode (of ten) was the one where they were on tour in Australia, in the desert after she failed to climb ‘Ayers Dock’, and where there is a reconciliation of sorts, and hope, and cute lambs.

But then his jealousy over her popularity with the public kicks in.

Heartbreaking. It’s all so heartbreaking. Her dance with Wayne Sleep. That Phantom Of The Opera video she gives him as a gift, and which he describes as ‘vulgar’. Here were two people who should never have got together – ‘We have to stop it now,’ said Princess Margaret before their wedding – and wouldn’t have got together in regular circumstances.

That’s what comes across most, in fact. That they’re all victims, one way or another, of the monarchy itself. They live lives of extraordinary wealth and privilege – have any of them put on a wash, cursed because someone has finished the milk, replaced a toilet roll? – but they pay a price.

There is a scene when the Queen is told that Diana is taking baby William on the tour to Australia, and she is baffled. She went on tour to Australia for five months in 1954 and didn’t take her children, she says.

‘And don’t you think that had consequences?’ asks Princess Margaret, darkly. ‘No,’ says the Queen, still baffled, ‘the tour was a triumph.’ There is probably no such thing as a ‘functional’ family but some are tripped into becoming more dysfunctional than most.

Elsewhere, we have Gillian Anderson as Margaret Thatcher, giving a weirdly hunched and contorted performance – I was most put in mind of Gollum – but her one-on-ones with the Queen were still thrilling.

Anyway, as we left it, Thatcher is gone, Prince Andrew has yet to visit the Pizza Express (Woking) that he will find especially memorable, and Diana is on the brink of superstardom.

On to James May’s new cookery series, Oh Cook, where he does not try to do a Nigella. No fairy lights. No coy looks. No saucy licking of spoons. No coming down in a silky nightie in the middle of the night to raid the fridge or, if he does, we don’t see it.

Thank God. The recipes are simple – ‘I’m learning as I go’ – and sometimes disgusting (Asian-influenced Spam fritters, anyone?), but you are not watching for the recipes.

You are watching for his deconstruction of cookery programmes, which is fun. 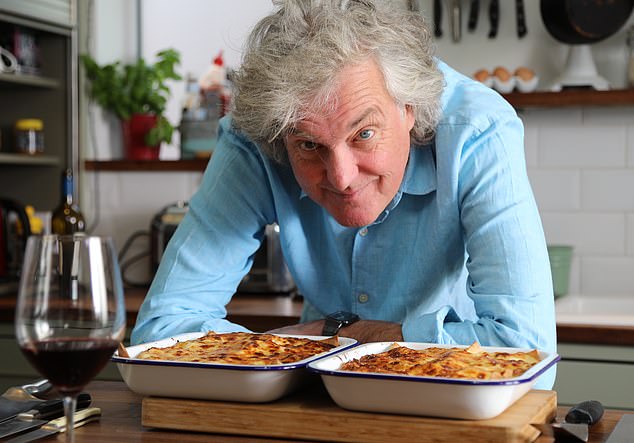 James May (above) isn’t as funny as he thinks he is, but he does have natural warmth and a sense of mischief, and it’s all carried along nicely by that

The camera crew, they’re all on show. (‘Might I make a suggestion?’ asks a cameraman at some point. ‘No,’ barks May.) We see the home economist who, on these shows, always does most of the work (I honestly didn’t know).

We see how final dishes are filmed in the round (a special rotating plate) and why nothing ever goes wrong. (Straight in the bin as the home economist rolls up her sleeves…)

Probably, James May isn’t as funny as he thinks he is, but he does have natural warmth and a sense of mischief, and it’s all carried along nicely by that.