Debenhams calls in liquidation experts putting its entire 14,000-strong workforce at risk in what could be the biggest jobs cut of the coronavirus pandemic

Debenhams’s entire 14,000 workforce is bracing for bad news as the retailer calls in liquidation experts.

The struggling British department store chain has appointed Hilco Capital to draw up contingency plans should an attempt to sell the business end in failure, according to Sky News.

On Tuesday Debenhams said it would cut a further 2,500 jobs, while taking ‘all necessary steps’ to give the chain every chance of a viable future.

It comes as Jet2 announces 102 pilots face the axe after flights were grounded due to the coronavirus pandemic.

The British department store chain has appointed Hilco Capital to draw up contingency plans should an attempt to sell the business end in failure, according to reports (file photo)

The move from Debenhams follows the chain collapsing into administration four months ago.

Meanwhile, in June, the British Airline Pilots Association (Balpa) union said Jet2 was proposing cutting 102 pilot jobs after flights were grounded due to the coronavirus pandemic.

On Saturday, the union said the Leeds-based carrier was pressing ahead with the cuts despite a range of alternative options put forward by Balpa.

Several other airlines have announced job cuts after a collapse in demand caused by the pandemic, including British Airways, easyJet and Ryanair.

Balpa general secretary Brian Strutton said: ‘This announcement is yet another which shows the desperate state of the British aviation sector.

‘Despite enormous efforts to work with Jet2 to find ways of saving these jobs, the airline is insisting on 102 redundancies.

‘This will be a particular kick in the teeth as many of those who may lose their jobs have recently joined the airline after having been dismissed from Thomas Cook which went into administration last year.’

Mr Strutton called for support for the industry which has also been affected by the implementation of quarantines on travellers from various holiday destinations. 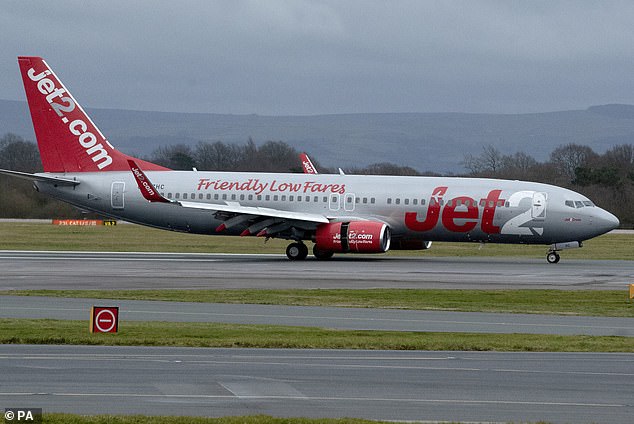 It comes as Jet2 announces 102 pilots face the axe after flights were grounded due to the coronavirus pandemic. Several other airlines have also announced job cuts (file photo)

He said: ‘The Government has a significant role to play in supporting the vital British aviation industry. Its quarantine changes keep throwing every restart plan into chaos.

‘If these quarantines are really needed, the Government must stump up the support to help the airline industry which is doing its best to get back on track but keeps being knocked back at every juncture.’

It comes as shocking new data revealed that the number of people on company payrolls in the UK has fallen by 730,000 since lockdown – the biggest drop in employment a decade.

Figures have started to show the huge impact of coronavirus on the labour market, with a wave of jobs being axed.

In the three months to June, the number in work decreased by 220,000 – the largest quarterly slump since 2009. Total hours worked slumped by a fifth over the quarter to the lowest level since 1994.

Meanwhile, the numbers on payroll tumbled another 114,000 in July, as the claimant count – which includes some people who are in work – increased again to reach 2.7million.