Rescue teams on Saturday plowed through concrete blocks and the debris of eight collapsed buildings in search of survivors of a powerful earthquake that struck Turkey’s Aegean coast and north of the Greek island of Samos, killing at least 27 people. More than 800 others were injured.

The quake hit Friday afternoon, toppling buildings in Izmir, Turkey’s third largest city, and triggering a small tsunami in the district of Seferihisar and on Samos. The quake was followed by hundreds of aftershocks.

Early on Saturday, onlookers cheered as rescuers lifted teenager Inci Okan out of the rubble of a devastated eight-floor apartment block in Izmir’s Bayrakli district. Her dog, Fistik, was also rescued, Sozcu newspaper reported. Friends and relatives waited outside the building for news of loved ones still trapped inside, including employees of a dentist’s surgery that was located on the ground floor.

In another collapsed building, rescuers made contact with a 38-year-old woman and her four children — aged 3, 7 and 10-year old twins — and were working to clear a corridor to bring them out, state-run Anadolu Agency reported.

Two other women, aged 53 and 35, were brought out from the rubble of another toppled two-story building earlier on Saturday.

In all, around 100 people have been rescued since the earthquake, Murat Kurum, the environment and urban planning minister, told reporters.

Some 5,000 rescue personnel were working on the ground, Kurum said.

At least 25 people were killed in Izmir, including an elderly woman who drowned, according to Turkey’s Disaster and Emergency Management Presidency, or AFAD.

Two teenagers were killed on Samos after being struck by a collapsing wall. At least 19 people were injured on the island, with two, including a 14-year-old, being airlifted to Athens and seven hospitalized on the island, health authorities said.

The small tsunami that hit the Turkish coast also affected Samos, with seawater flooding streets in the main harbour town of Vathi. Authorities warned people to stay away from the coast and from potentially damaged buildings.

The earthquake, which the Istanbul-based Kandilli Institute said had a magnitude of 6.9, was centred in the Aegean northeast of Samos. AFAD said it measured 6.6. and hit at a depth of some 16 kilometres.

It was felt across the eastern Greek islands and as far as Athens and in Bulgaria. In Turkey, it shook the regions of Aegean and Marmara, including Istanbul. Istanbul’s governor said there were no reports of damage in the city, Turkey’s largest.

Thank you, Mr. Prime Minister.<br><br>I offer my condolences to all of Greece on behalf of myself and the Turkish people. Turkey, too, is always ready to help Greece heal its wounds.<br><br>That two neighbors show solidarity in difficult times is more valuable than many things in life. <a href=”https://t.co/eo6iClofKZ”>https://t.co/eo6iClofKZ</a>

Turkey is crossed by fault lines and is prone to earthquakes. In 1999, two powerful quakes killed some 87,000 people in northwestern Turkey. Earthquakes are frequent in Greece too.

Authorities warned residents in Izmir not to return to damaged buildings, saying they could collapse in strong aftershocks. Many people spent the night out in the streets, too frightened to return to their homes, even if they sustained no damage, the DHA news agency reported.

More than 3,000 rescue personnel were sent to Izmir, as well as relief supplies. The Turkish Red Crescent set up kitchens.

In a show of solidarity rare in recent months of tense bilateral relations, Greek and Turkish government officials issued mutual messages of solidarity while the presidents of Greece and Turkey held a telephone conversation.

Relations between Turkey and Greece have been particularly tense, with warships from both facing off in the eastern Mediterranean in a dispute over maritime boundaries and energy exploration rights. The ongoing tension has led to fears of open conflict between the two neighbours and NATO allies.

WATCH | Earthquake strikes in the Aegean Sea between the Turkish coast and the Greek island of Samos: 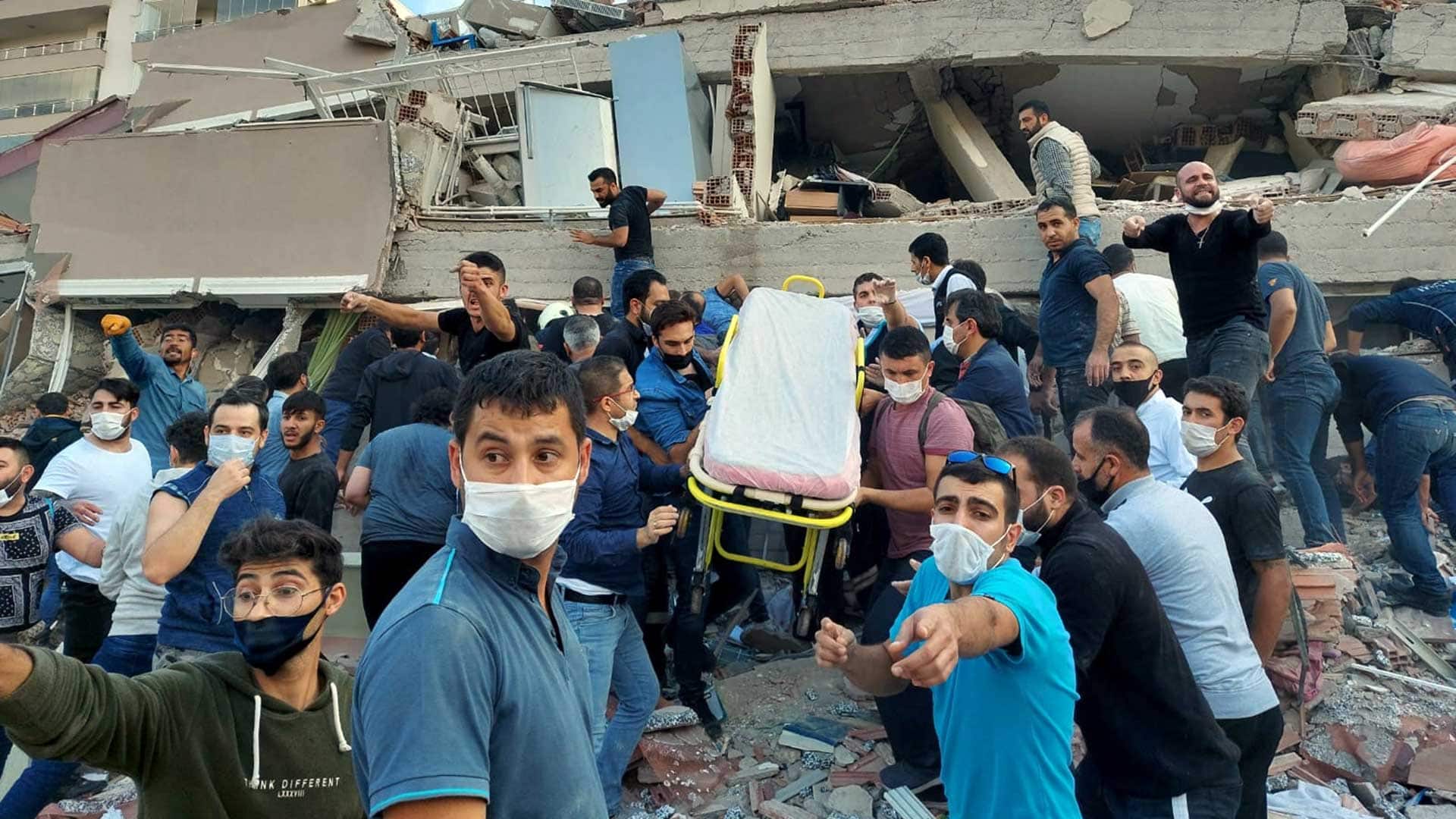 More than a dozen people were killed and hundreds were injured when a massive earthquake struck the Aegean Sea between the Turkish coast and the Greek island of Samos. 1:44