The death toll from the Miami condo collapse reached 84 on Saturday, as workers recovered the bodies of seven new victims overnight.

Miami-Dade County Mayor Daniella Levine Cava stated that 62 of the victims have so far been identified.

The death toll from the Miami condo collapse reached 84 on Saturday, as workers recovered the bodies of seven new victims overnight

On Friday, four of those victims were named. They included a 21-year-old University of Chicago student, Ilan Naibryf, and a 31-year-old man visiting from New Jersey, Benny Weisz.

Colombian-born Angela Velasquez, 60, owner of a popular men’s boutique, and Leidy Luna Villalba, a Paraguayan nursing student, were also named among the dead.

Luna lived in the condo, having traveled abroad for the first time as a nanny for the family of Silvana Lopez Moreira, the first lady of Paraguay.

On Thursday, Paraguay’s foreign minister said in a radio report that the body of Lopez’s sister was among those found. 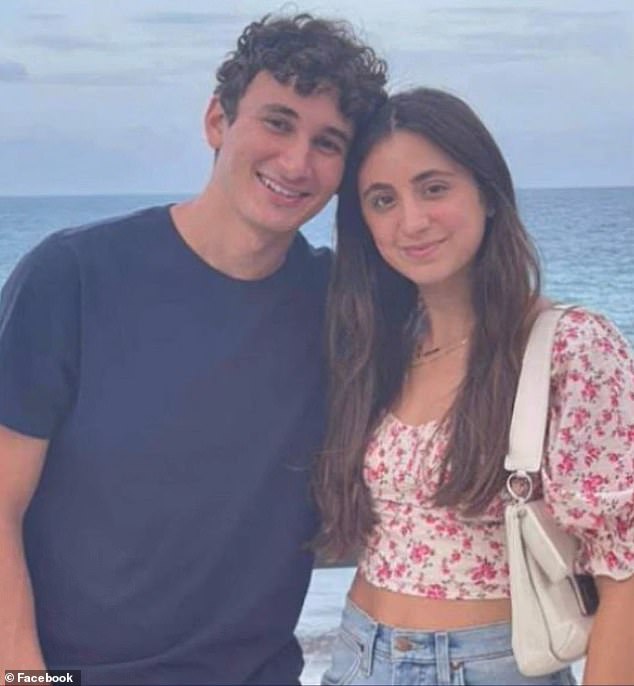 Ilan Naibryf, 21, a physics major at the University of Chicago, was confirmed on Friday as among the dead. His girlfriend Deborah Berezdivin, also 21, a student at George Washington University, is still missing 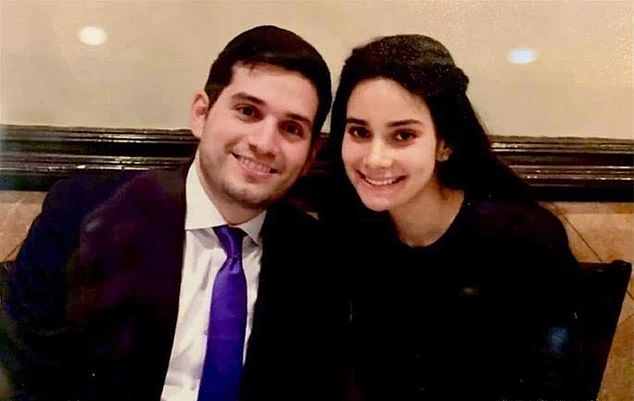 Benny Weisz, 32, and Malki Weisz, 27, of Lakewood, N.J., had just flown into Surfside on the night of the Champlain Tower collapse. The couple, married for five years, came to visit Malki’s father, Chaim Rosenberg, and spend Shabbat with him in his new apartment. Benny and his father-in-law have been found; Malki is still missing 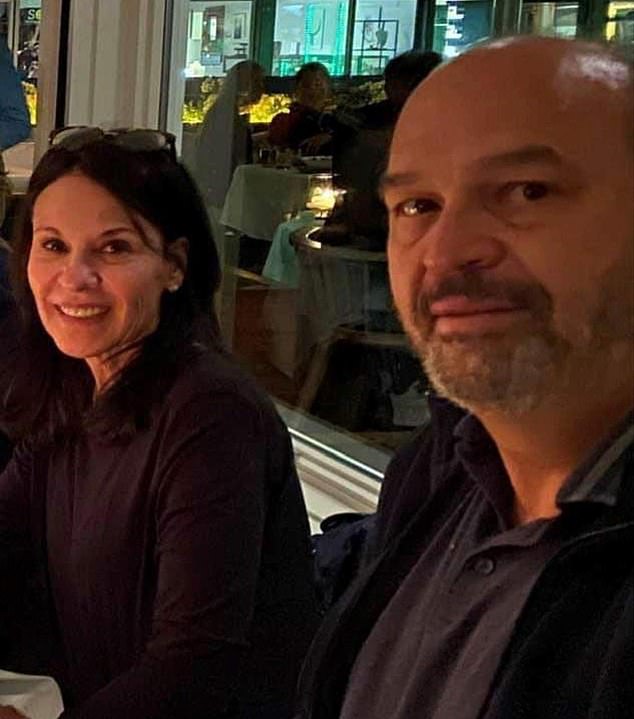 Angela Maria Velasquez, 60, was confirmed on Friday to have died in the tragedy. Her husband Julio Cesar Velasquez, 67, remains missing in the Surfside condo collapse, as does her daughter Theresa, 36 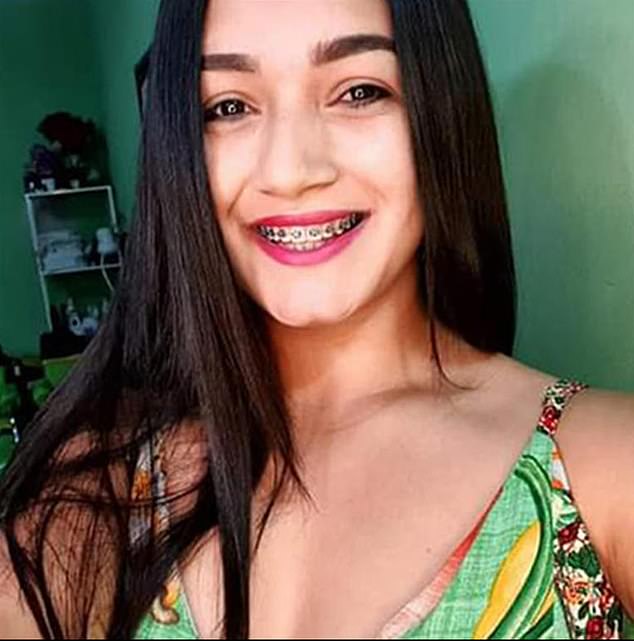 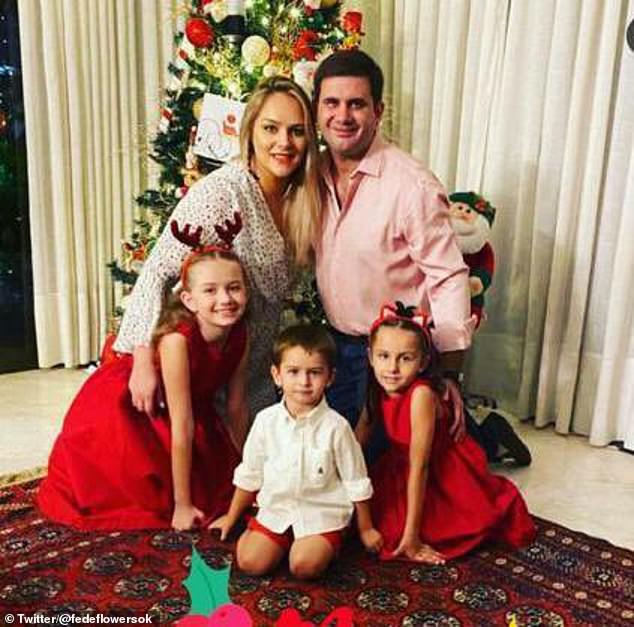 Paraguay foreign minister has confirmed that the bodies of the Paraguayan First Lady’s sister, Sophia López Moreira, her husband Luis Pettengill and their youngest child were among the bodies identified on Thursday

Recovery workers on Friday toiled for a 16th day to find victims in the rubble.

Another 61 people remain unaccounted for, among them Naibryf’s girlfriend, Deborah Berezdivin, a student at George Washington University.

Naibryf was a physics major with a minor in molecular engineering and was also president of the student Jewish life organization.

‘He also was co-founder and CEO of STIX Financial, a 2021 College New Venture Challenge finalist, served as president of the Chabad House student board, was a former member of the men’s track and field team, and was active in recreational soccer,’ the school said.

Weisz’s wife Malki remains unaccounted for, as do Velasquez’s husband Julio and daughter Theresa, a Live Nation executive, 36, who had flown in from Los Angeles the night before.

Miami-Dade Mayor Daniella Levine Cava said the work to recover victims was ‘moving forward with great urgency’ in order to bring closure to the families of victims who have spent an agonizing two weeks waiting for news.

‘This is a staggering and heartbreaking number that affects all of us very deeply,’ Levine Cava said of the latest death toll. 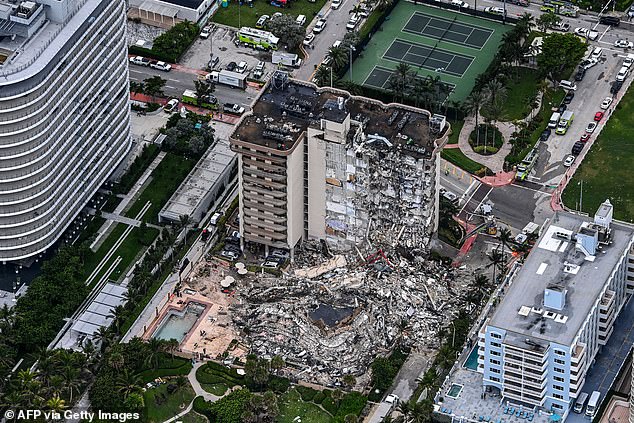 This aerial view, shows search and rescue personnel working on site after the partial collapse of the Champlain Towers South in Surfside

Rescue workers and emergency support teams from Florida and several other states have labored in 12-hour shifts, 24 hours a day at the site of the devastated beachfront condominium in Surfside – physically and emotionally taxing work performed amid oppressive heat and in dangerous conditions.

‘We know that there will be long-term impacts for the teams on the front line,’ Levine Cava said.

‘They have given so much of themselves in these first two weeks.’

‘It’s important for us to talk,’ he said. 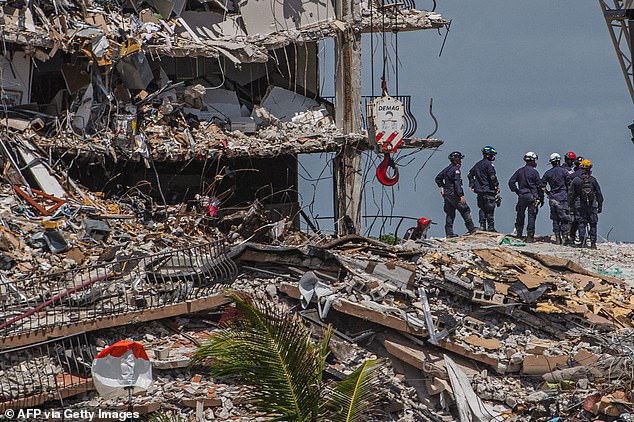 Rescuers are seen searching through the debris on June 27. The death toll is now at 79

To that end, Levine Cava said officials have added peer support personnel at the fire stations.

No one has been found alive since the first hours after a large section of the 12-story Champlain Towers South came crashing down on June 24.

Hope of finding survivors was briefly rekindled after workers demolished the remainder of the building on Sunday night, allowing access to new areas of debris.

Some voids where survivors could have been trapped did exist, mostly in the basement and the parking garage, but no one was found alive. Instead, teams recovered more than a dozen additional victims.

On Wednesday, workers shifted their mission from search and rescue to recovery after concluding that there was ‘no chance of life’ in the rubble.

Levine Cava said the high death toll is ‘an aching hole in the center of this close-knit family here in Surfside.’

She said that with 61 people still listed as missing, detectives are continuing to audit the list to verify that all of those people were actually inside the building when it collapsed. ‘We want to get this right,’ she said.

Miami-Dade Fire Chef Alan Cominsky said it is unclear how the long the recovery effort will take, but said crews are making progress.

Rescue workers now focused on finding remains instead of survivors have pledged to keep up their search for victims until they clear all the debris at the site.

State and local officials have pledged financial assistance to families of the victims, as well as to residents of the building who survived but lost all their possessions.

On Friday, Gov. Ron DeSantis issued an executive order indefinitely suspending laws that would require the payment of property taxes for residents whose homes were destroyed or rendered uninhabitable in the collapse.

The order also requests that the state legislature explore additional acts that may be needed to alleviate their property tax obligations.

Meanwhile, authorities are launching a grand jury investigation into the collapse. And at least six lawsuits have been filed by families.

Footage shot by a prospective buyer showed cracks and puddles in the Surfside condo building in Miami a year before it collapsed.

The video, which was shared with DailyMail.com, was taken in the garage of the Champlain Towers South building in July last year.

Fiorella Terenzi, who had toured the complex in anticipation of buying a unit on the sixth floor, said what she saw in the garage ultimately turned her off buying in the building.

Terenzi’s video showed wide cracks in the ceiling of the garage that appeared to have been repaired and painted over.

It also showed what appeared to be water puddles in the ceiling. 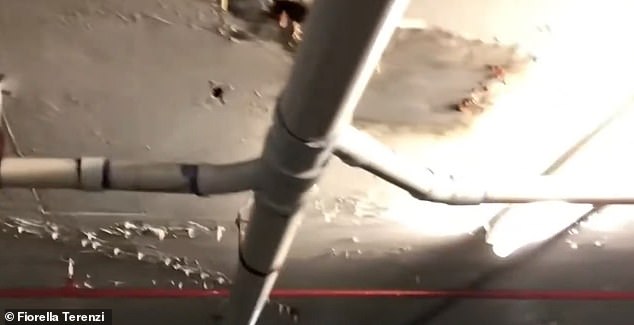 Several engineers reviewed Terenzi’s video and determined there were no obvious red flags that could have pointed to the building collapsing some 12 months later, according to the Miami Herald.

The parking garage that Terenzi filmed is the same one in which an engineer flagged in a 2018 report as having ‘major structural damage’ to the pool deck area and underground parking garage.

The engineering report from the firm of Morabito Consultants did not warn of imminent danger from the damage.

It did, however, note the need for extensive and costly repairs to fix the systemic issues with Champlain Towers South.

Investigators, who have been at the site since the building collapsed on June 24, are still working to determine how it collapsed.

It has previously been suggested that existing damage to a ground-floor pool deck and, or, concrete cracking throughout the building could potentially be behind the collapse.

Structural engineers have warned, however, that the investigation into the cause will be long-term given they have been limited so far because the rescue operation is ongoing. 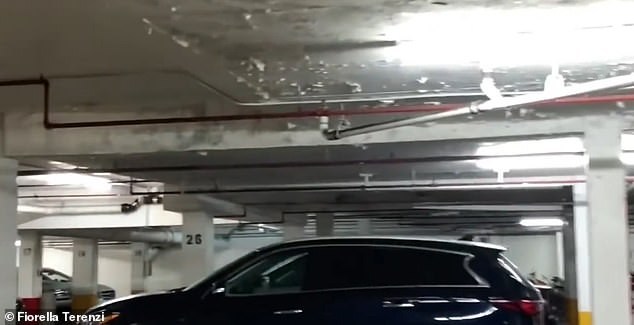 Terenzi, who had toured the complex in anticipation of buying a unit on the sixth floor, said what she saw in the garage ultimately turned her off buying in the building 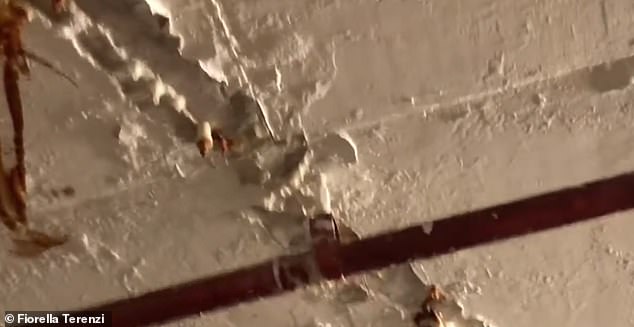 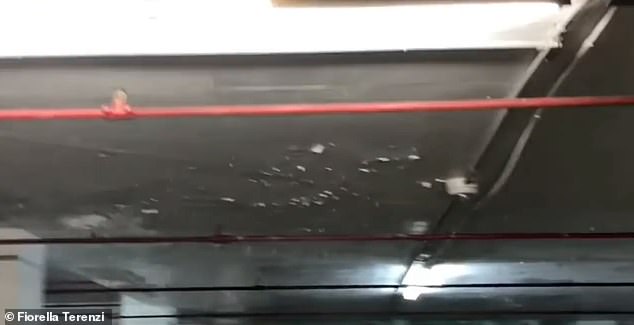 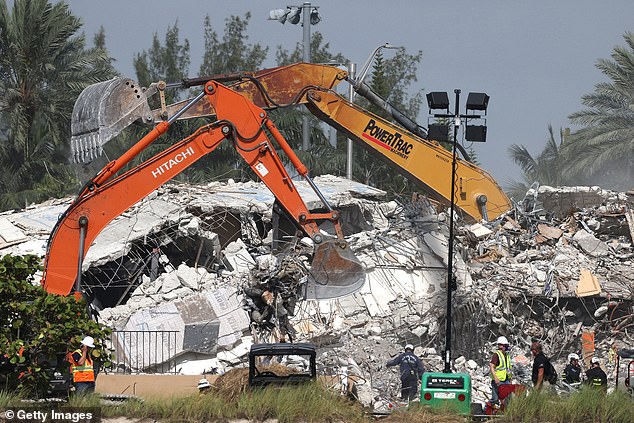 It comes as an additional 14 bodies were uncovered in the rubble of the Champlain Towers South condo building by Friday, bringing the death toll to 79 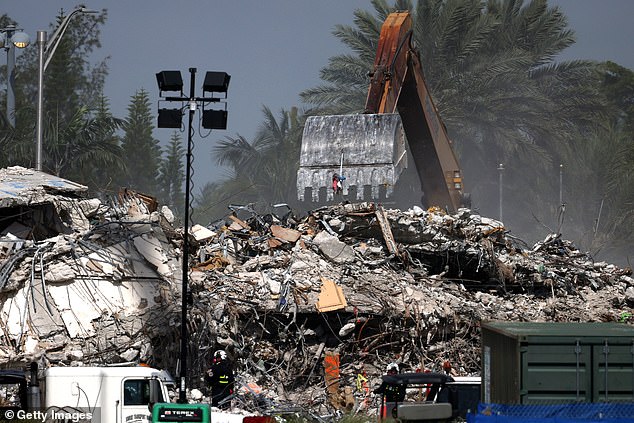