By John-paul Ford Rojas In Davos For The Daiy Mail

The drought in high level corporate dealmaking could be even longer than the one that followed the start of the pandemic, the UK boss of PwC has predicted.

Kevin Ellis, UK chairman of the big four accountancy and consulting firm, said the quiet last quarter of 2022 looked set to extend until the second half of this year.

Ellis, speaking at the World Economic Forum in Davos, told the Mail that the ‘top level of deals’ was slowing down amid a ‘hard’ debt market – after surging inflation drove central banks to hike the cost of borrowing sharply.

Slow down: PWC chairman Kevin Ellis said a hiatus for major deals that started in the last quarter of 2022 looked set to extend until the second half of this year

‘You won’t see the big mega deals that you’ve seen in the past for a little while because the debt market isn’t capable of funding them,’ Ellis said.

The comments come days after a clutch of Wall Street banks counted the cost of a slump in deals as revenues in their investment banking arms slumped by more than half, prompting JP Morgan to cut bonuses for its investment bankers by up to 30 per cent.

Ellis was however bullish about the prospects lower down the corporate food chain, as well as restructuring when stricken firms run into trouble, all of which earn PwC lucrative consultancy fees.

‘There will always be dealmaking,’ he said. ‘The size and scale will be different. If you go back to March 2020 we saw a void in dealmaking but it came back with a vengeance in September because there’s still a lot of money out there in the hands of private equity, sovereign wealth and corporations, and therefore they won’t want to miss the uptick.

‘So although there might be a bit of a void in the deal market now at the highest levels there’s still activity in the mid-range and it will come back fast as it did after Covid.

‘We’re still seeing quite a lot of deal activity and our deal business is still growing.’

Ellis said there would also be ‘a lot of activity in the restructuring market’. He added: ‘It will change again.

‘What we saw in the last time we had this slowdown with 2020 and Covid, the slowdown was for a much shorter period than we expected.

‘I think the first signs of positivity like we saw in the deals-led recovery in September 2020 will probably happen again in the second half of this year.’

He said the slump started in the last quarter of last year. If his prediction is right it would mean the ‘void’ in major deals potentially lasting longer than the six-month freeze between March and September of 2020. 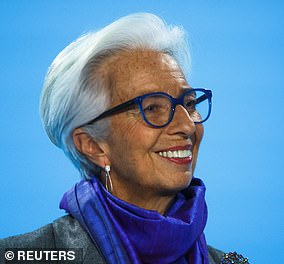 The European Central Bank is pushing back against bets that it would slow the pace of its interest rate hikes given recent falls in inflation.

Investors have trimmed their expectations for how much it would raise borrowing costs, comforted by data showing lower inflation in the eurozone and around the world and related talk of smaller hikes by the US Federal Reserve.

But bank president Christine Lagarde said investors were underestimating its determination to bring inflation in the 20- nation eurozone back to its 2 per cent target. It is currently 9.2 per cent.

Insisting the bank was determined to ‘stay the course’, Lagarde told an audience in Davos: ‘I would invite [financial markets] to revise their positions. I think they would be well advised doing so.’

The comments suggested the ECB is preparing for further rate hikes. By contrast, Bank of England Governor Andrew Bailey said ‘a corner has been turned’ in the UK after inflation fell for a second month in a row – though it is high at 10.5 per cent.

He also hinted that interest rates could peak at 4.5 per cent, having risen from 0.1 per cent to 3.5 per cent since December 2021.

The Bank is expected to raise rates to 4 per cent on February 2 – the same day the ECB is seen as hiking from 2 per cent to 2.5 per cent.