EXPRESS INFORMER > Health & Medicine > Deadly bacteria could be living in your AC!

The bacteria that causes Legionnaires, a deadly infection that causes pneumonia, could harbor itself in a person’s air conditioning, hot tub or at-home fountains and plumbing if not properly managed, experts warn.

A cluster of cases of the deadly disease has sprung up in the Bronx, New York City, with 24 cases and two deaths tied to AC cooling towers that were contaminated with the bacteria.

Experts tell DailyMail.com that the overall risks of the disease are low, and that when it does emerge, it often does in the type of clusters that are currently being dealt with in the Big Apple.

Basic upkeep of an in-home AC unit can limit risks of allowing the bacteria to enter the home, though, and keep the household safe from the potentially deadly virus.

As a Leggionaire’s outbreak strikes New York City, some experts are warning that the bacterial infection, while uncommon, can occur in AC unites, hot tubs and other devices where water accumulates are not maintained properly (file photo)

Dr Steven Lubinsky, a pulmonary medicine expert at NYU Langone Health, told DailyMail.com that the virus is caused by a bacteria called legionella.

The organism, named after an ‘American Legion’ convention in a Philadelphia hotel where it first caused an outbreak in 1976, causes two diseases, Legionnaires and the Pontiac Fever – discovered in Michigan in the 1980s.

Legionnaires is the more severe of the two, with the distinction being that patients also suffer from pneumonia along with symptoms like a fever and trouble breathing.

Symptoms often appear within two to 14 days of exposure. There is no available vaccine for the infection. 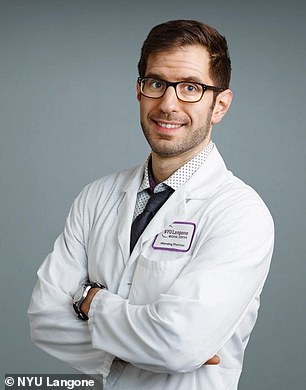 Dr Steven Lubinsky, a pulmonary medicine expert at NYU, explains that while many people who are exposed to the bacteria will be fine, people with immune system or respiratory issues are at an increased risk of hospitalization or death from the infection

The bacteria fails to infect with a majority of people that it interacts with, though, with its burden mainly being felt by people who already have a pre-existing condition.

‘People who have risk are usually the ones who get sick from legionnaires… normal, healthy people, are much less likely to get sick from it,’ Dr Anthony Saleh, a pulmonary disease expert at NYPresbyterian Hospital system, told DailyMail.com.

These include smokers, people of the age of 50, a weakened immune system from cancer, kidney disease or a similar condition or people with a chronic lung condition like COPD.

He said that true case figures are likely higher than what is being recorded, because many healthy people that contract the virus either do not feel symptoms, or have very mild symptoms they will never get checked out, and as a result never enter official case tallies.

Of those that do feel symptoms severe enough to require hospitalization, around one-in-ten will die.

As part of the New York City outbreak, two deaths and four hospitalizations have been recorded out of 24 people who have tested positive for the infection.

While human-to-human transmission of the infection is impossible, cases often do appear in clusters.

This is because once something is contaminated by the bacteria, it contaminates the air around it, and inhaled aerosols enter a person’s body and cause infection.

‘It does typically occur in clusters… what happened in the Bronx is not at all uncommon,’ Saleh explained.

Stagnant water that is not properly kept can be a large risk factor for spreading the infection, making hot tubs, water fountains, and even some odd plumbing systems common causes for bacterial spread.

Air conditioning units are an unlikely, but occasional cause as well. Lubinsky says that if water gets into the system, and sits for a long period of time, them small organisms in the water can eventually be infected with Legionnaires.

The unit will then distribute these infected organisms throughout the home. When breathed in, they can infect a person’s lungs. 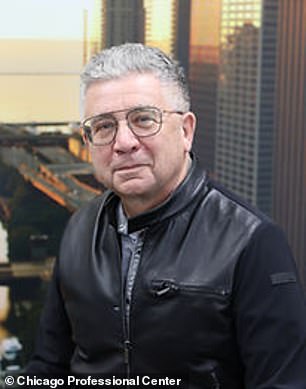 VJ Abil (pictured), director of the Chicago Professional Center, explained the Legionnaires from the AC can be prevented with proper filtering

VJ Abil, director of the Chicago Professional Center, one of the Windy city’s top trade schools with a well regarded HVAC program, explained to DailyMail.com how to prevent this with proper filters:

‘Special FEMA filters, that can be installed into your home, do not allow the transmission of anything that is more than 0.3 micron.

‘Legionnaires disease bacteria size varies from two to 20 micrometers, making it impossible to be transmitted through the FEMA filters.

‘Furthermore, bacteria will not be able to reach the filter, since they cannot travel by air for more than six feet, and the return duct is at least 30 feet long, leading the bacteria to their demise in the return duct.’

There are no tell-tale symptoms of the disease, though. Many people suffering from it have fairly mild cases, and it presents itself as other, more mild, forms of pneumonia even in severe cases.

Saleh explains that this puts the onus on doctors and health officials to routinely screen patients for the virus, and make sure the public knows that the bacteria is causing cases in the community.

Doctors should make sure to screen any patient that could have the bacterial infection.

Once an infection is found in the community, officials should urge anyone feeling even mild symptoms to get tested – even when they would usually write it off as nothing more than a simple cough.